I don’t know what it is I exude. But whatever it is, it’s whatever I am.

Janet Leigh was discovered by Norma Shearer.  Her birth name was Jeanette Morrison.  According to Dominic Dunne, Shearer saw Janet’s photograph at a ski lodge where Janet’s parents were working as a desk clerk and maid.  Shearer brought her to the attention of the studio where she did a screen test and was put under contract.

What prompted this write up, was watching one of my favorite escape movies, Hello Down There.  Just the perfect 60’s pop music Technicolor extravaganza with virtually every 60’s character actor making an appearance.  LOVE.

This scene from the film always makes me laugh. I love that she says ganglia.

Of course, you couldn’t not mention her most famous role in the film Psycho.

She famously married Tony Curtis, and the two were the Brad and Jennifer of the day. They had two girls, Jamie Lee and Kelly.  Tony couldn’t keep his trousers zipped, and left Janet for a 17-year-old.  Janet married stockbroker Robert Brandt in 1964, and stayed married to him until her death.

I met Janet once.  She was doing a book signing in Hollywood, back in 1995.  I waited in line with my copy of her book, Behind the Scenes of Psycho – The Classic Thriller.  I also had a butcher knife I wanted her to sign.  Thinking better of whipping out a knife in front of Janet, I told her, “I have a knife in my bag. Would you please sign it?”  A perfectly normal request, I thought. “I can’t. My agent told me I should never sign knives, because you never know what will happen to them.”  Sadly, I shuffled away, but still happy from meeting Janet Leigh.

Back when I lived in Chicago, I had acquired a list of celebrity telephone numbers.  This was long before *69, so we dialed without fear, Janet Leigh.  We had a tiny exchange, which we thought Janet would find amusing.  She didn’t.

“Oddly enough, I still get kooky mail and phone calls.  That is why I am so fussy about protecting the privacy of my telephone number.  It is such a pain to constantly change numbers; I always forget to tell someone who should have my number and then get annoyed when that someone doesn’t call me back.

As recently as four months ago, I was forced to get a new number.  There had been too many hang-ups.  And then I would get, “Hello, is Norman there?”  And dumb me would brightly say, “Oh, you must have the wrong number!”  And the voice would lower and say, “This is the Bates Motel, isn’t it?”

Now, I am sure that Janet got tons of prank calls, but this figures in to the time she was writing the book, and well, I’d like to think I’ve contributed something to the world of Psycho.

Janet broke her arm while filming Touch of Evil.  I wonder if this was the arm that had the hand that went gangrenous at the end.

Janet died in her home on October 3, 2004, she was 77 years old.  She had been in ill health for years, suffering from vasculitis and peripheral neuropathy.  Her family were with her when she passed.  Officially, this is the address where she died. 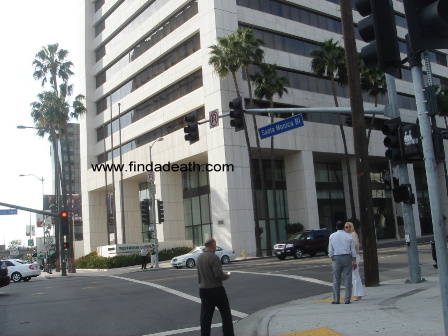 I’m not sure this building is at all residential, but it is large enough. 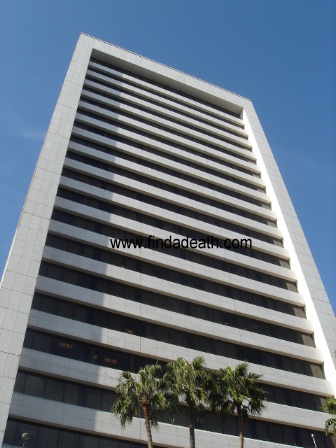 She was cremated, and her cremains were turned over to the family.

One of the things I’ve always wanted to do in LA, but haven’t had the opportunity (there were several attempts) to do, was actually walk around the Psycho house on the Universal Back lot.  My dream Christmas Card picture is at the top of the steps. 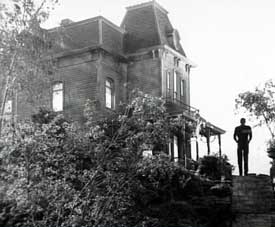 Janet’s last film was Halloween H20 with daughter/son Jamie Lee Curtis.  Her 2 minute scene was riddled with tributes.  Her car in the film was an exact duplicate of the one that became her grave in Psycho.  She mentions being maternal to Jamie’s character, and Janet’s character was named Norma, an homage to Psycho.  Fun. 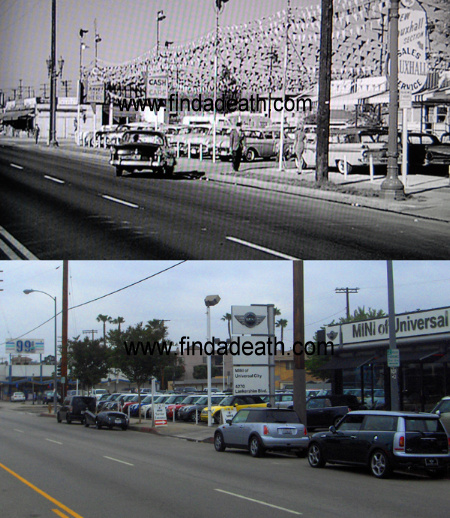 Trivia:  In 1988, Myra Davis, who was Janet’s body double in Psycho, and also the voice of Mrs. Bates, was strangled.  It took 10 years, but the killer was found and convicted. 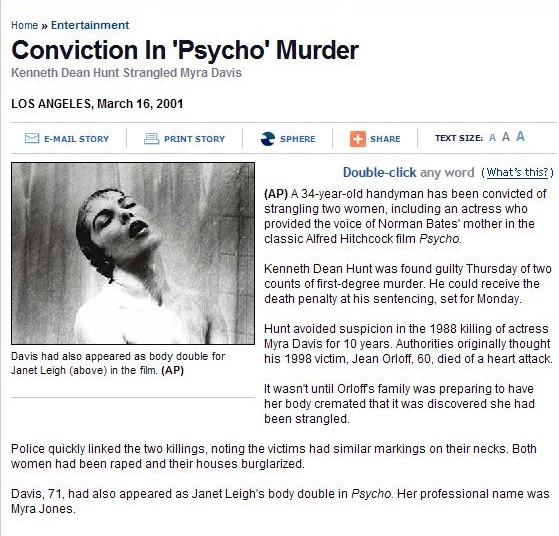 Thanks Mike Steen for the help, and FAD forum member Eric Miller for generously sponsoring this page.