This is really a prelude to the Lana Turner death story, but I didn’t think it fair that he be up first.

In 1958, Lana was dating this gangster with a big dick called Johnny Stompanato. It was legendary. She had just rented a home in Beverly Hills on North Bedford Drive. 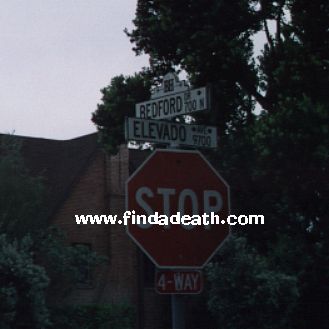 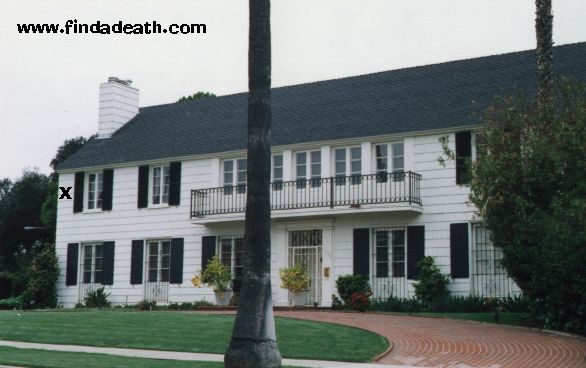 She was living with her daughter, Cheryl, 14, and a maid. Lana was trying to break off her relationship with Johnny, and he was having none of it.

On the evening of Good Friday, April 4, 1958 – they were having another argument in Lana’s bedroom (see the X on the photo). She was dumping him. Again. Cheryl was listening in the hallway. She heard Stompanato say, “You’ll never get away from me. I’ll cut you good, baby. No one will ever look at that pretty face again.” Charming.

Cheryl went down to the kitchen and got a 10-inch carving knife, as you do, and returned. Supposedly Cheryl was pounding on the door when Stompanato came storming out, her knife colliding with his chest, plunging in, and severing his aorta. His last words were, “My God, Cheryl, what have you done?” before he collapsed into a fit of gurgles and died. 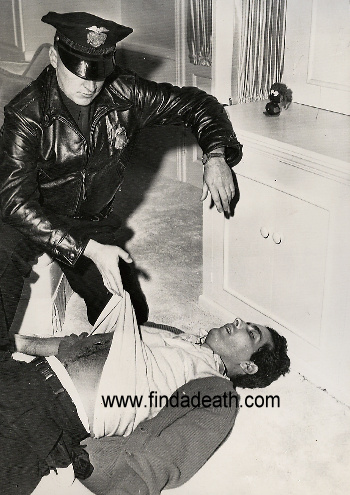 Cause of death?  A stab wound of the abdomen, penetrating liver, portal vein and aorta with massive hemorrhage. 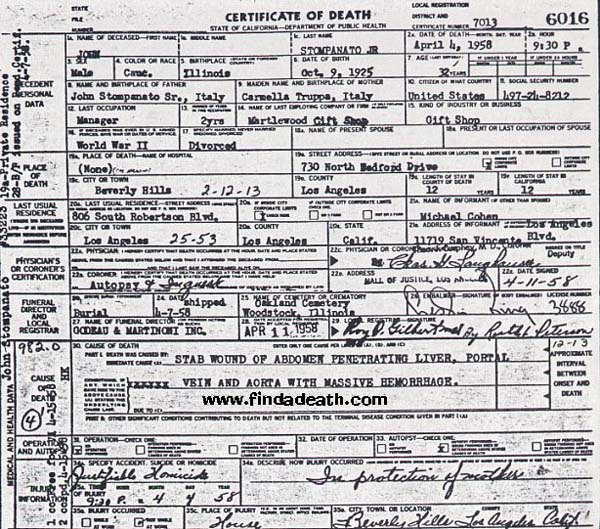 March 2002, Findadeath.com friend EJ Fleming sends this in:  I was poking around yesterday and noticed a couple of things. On the Lana Turner/Johnny Stompanato section, did you notice who the informant was listed as? “Michael Cohen.” Mickey Cohen, the mobster who was Stompanato’s boss. The address for Cohen listed on San Vicente Blvd. was a shop that he kept open as a front for a large book-making operation he ran out of the back room and basement.

My Gary Sweeney interviewed Cheryl in January of 2009, and she discusses the story in detail.  Pretty gripping stuff, and lots of interesting Lana info.

Interested tidbits from Johnny’s autopsy report:  in his stomach was either pea soup or coffee and cream.  Apparently it’s difficult to tell it apart, posthumously.  He was wearing a pair of black loafers (size 10 1/2) with tassels, gray wool socks, and silk boxers.  An orange wood sweater (for the sweater girl) and black slacks.  Also included in the Stompanato package to arrive at the morgue was one Cannon terrycloth hand towel, with 2 narrow and 1 wide stripe at each end.  There, now won’t you sleep better knowing these details?  Love it.

There was a viewing of his body here in LA and on April 8th, his body was shipped back to Woodstock, Illinois for burial. 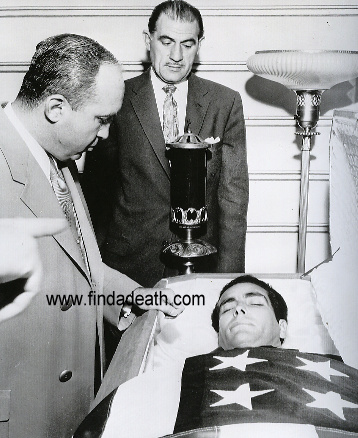 His coffin was covered with a flag, for his service in the military.

Interestingly, Johnny’s family didn’t buy the Cheryl story, and sued Lana for almost a million bucks, for wrongful death.  Lana sent em a check for 20 grand.  That seemed to shut them up.

“Hi Scott, I am John Stompanato 3. I just want to say that John was not the person that everyone thought he was. He never swore or so ever even hit a woman. He was a kind and gentle man that fell in love with a Hollywood starlet, and was a victim of a crooked legal system as well as so many jealous people wanting the chance to try to so called snuff him out, and just assume that he was a gangster and which he never was, he was just a bodyguard.

I look forward to talking to you, John M Stompanato. John was my uncle”.

Several months before Lana Turner died, I was working for a company that delivered groceries to peoples’ homes. I took the orders and since the store we used was kind of upscale, we had a bunch of celebrity types who ordered from us. One afternoon a Cheryl Crane called, wanting to set up an account for her mother. Of course I instantly think of the whole Johnny Stompanato thing, but how do you ask?

I start taking the mother’s info, and yep, it was for Lana. I went, “Oh, THAT Cheryl Crane,” and she laughed and said yes. She seemed very nice, though of course I’m thinking, wow, I’m talking to a KILLER!

Turns out Lana’s maid had broken her ankle, and Lana had to do the shopping herself. By chance, that evening Lana called and I happened to take her call. She was a very sweet, timid sounding woman. She kept asking me what she should get, and I went through her list with her, suggesting things. Her order wasn’t large & she didn’t get anything glamorous. I could picture her in a big white penthouse in Century City, relying on little ol’ $10/hour me to get her fed. It made me sort of sad.

When our company folded, I sent Lana a letter telling her it had been an honor to speak to her but I never got a reply. Not long after that, she died.

December 13 2001 – Findadeath.com friend Jim Today sends in this:  I just thought it might be cool to note on the Lana Turner page the odd and rarely mentioned fact that the Woody Allen movie “September” which although somewhat laborious, co-opts the real life Lana/Cheryl/Stompanato story 30 years later with a sort of “What happened to them, and what was their relationship like later?” sort of thing. The trusty Woody muse Mia Farrow plays the killer daughter, and the brilliant Elaine Stritch does what she can as the movie star mother character. It isn’t very good, but it is rather interesting for the attempt.  Lana also lived in the same building as the beloved Mary Wickes! Thanks, Jim!

This just in, July 2003, from Findadeath friend M.P. Chavez Berling:

Just as a FYI, Lana Turner’s husband’s restaurant was in Beverly Hills, California was called the Luau. My grandfather worked for them for many years from the early 1940’s when it was called the Tropics, to when Steven Crane bought the restaurant, and changed the name, to about three years prior to when it closed.

When he retired, after so many years of service, all they gave him was two uniform shirts, a pair of pants, his photos from the years he’d served, and a pair of shoes. So much for working for someone for 40+ years.

This just in January 2004, from Findadeath friend Dave Griffo:

Hi,
Love your site, I check it out all the time for updates!! Here’s some new info regarding Lana, this is from both and the A&E Biography TV series and a Turner network show on Lana.  Kinda shows she should’ve been in more comedies:

Lana was once going to a press event/movie premiere and had her agent with her in the back of the limo.  She pulled out a small, slim flask (always accessorize each outfit to the fullest !) and took a swig of whiskey.  Her agent reminded her “We’ll be at the party in fifteen minutes, you can have a drink when we get there”, to which Lana replied “Yeah, but that’s fifteen minutes without a drink.” In the 1970’s Lana appeared in the play “Forty Carats” at various dinner theatres and was totally freaked-out at the appearance of one ticket-holder in particular.  A stalker ?  No.  It was a woman in the front row who showed up with her hair in curlers !  The former MGM glamour-girl, whose studio-training probably included the admonition to never go out without looking PERFECT, was totally freaked-out and kept rhetorically asking “Where is she going tomorrow, that tonight she needs to show up to see ME with her hair still up in curlers?”

Thanks for the info, Dave!

I just sat through The Postman Always Rings Twice. Can anyone please explain the significance of the title? I sat there with my jaw hitting the floor during the final scene. Ugh. I even rewound it. Maybe I’m the dolt. Nah.

My buddy, Gary, from Seeing Stars.com – check it out from the links – it’s great – sent me this explanation.

“In the original film, the lead actor gets into an illicit affair with a married woman, and they plot to murder her husband. They do, and they get away with it, being found innocent at the murder trial. However, as luck would have it, the woman is later accidentally killed herself, and her lover is wrongly convicted of her murder. So the irony is that he was found innocent of a murder he DID commit, but still ended
up being found guilty of murder – for a crime he DIDN’T commit. Hence the “always rings twice…” line.”  Personally, I still don’t get it, but who am I?

Findadeath.com friend Pat K. sent in this explanation, which I find preferable:

“I don’t know for sure if this is true but, the explanation I was given in a creative writing course AND a literature course is this. The author
had written a manuscript and sent it out to many publishers. When it was returned to him, rejected, the postman used the signal of ringing twice
to let the author know the manuscript was rejected once again.

As I said, I don’t know the validity of this but, I kind of like it!

The debate continues!  Feb 10, 2000 – In the era when “The Postman Always Rings Twice” was written, mail was delivered twice a day. (Imagine that!) The reference is used in the movie as an allegory. The killer missed justice once, but justice (the postman) always rings twice.  Thanks for writing, Don.

Johnny’s autopsy report and complete coroner’s inquest (with testimony! Fascinating!) is available from our friends at CelebrityCollectables.com.  Tell ’em we sent ya!