Judith was a child actress who had appeared in dozens television shows, commercials and feature films. Judith was in Jaws IV – The Revenge with Lorraine (my husband runs this joint, and I’m gonna be a star dammit!) Gary. Roy Scheider chose not to reprise his role as Chief Brody in this one. I spent a couple of hours with Roy a while back. A very nice, friendly man, who happens to be good friends with Helen (I am not a dyke) Hunt. You know, I would pay to see every single Jaws movie, even if they made Jaws 25. I love those flicks. Anyway, on to Judith.

One of the television films Judith was in was called Fatal Vision, about a little girl murdered by her father. Art imitates life, imitates art.

Judith’s mother came from Hungary in 1956. She ditched the land of the Gabors and came to America where she met a guy named Jozsef, who was also from Hungary. He threw money around, charmed the pants off her and they married and had Judith.

From what I gather, Maria (the mom) wanted to be an actress (as most stage mothers do).  Judith was discovered in an ice skating rink and began her career.  Maria relished the attention she received via her daughter. I’m not saying Maria was a bad person, just neurotic.   Jozsef was the bad guy here.

Jozsef was a nasty piece of work. A real bully. I fucking hate bullies. They are the most horrible people in the world. When Judith became very successful, Jozsef went into overdrive and really laid the abuse on. For instance, before Judith went to the Bahamas to film Jaws IV, Jozsef held a knife up to his daughter and told her, “If you decide not to come back, I will cut your throat.” Psycho.

By 1988, Judith was pulling in $100,000 a year. They bought a nice three bedroom house in the Valley  One of the first things Jozsef did was erect a fence around the place. The family kept to themselves, but Maria did socialize with a few of the neighbors, and other stage mothers. 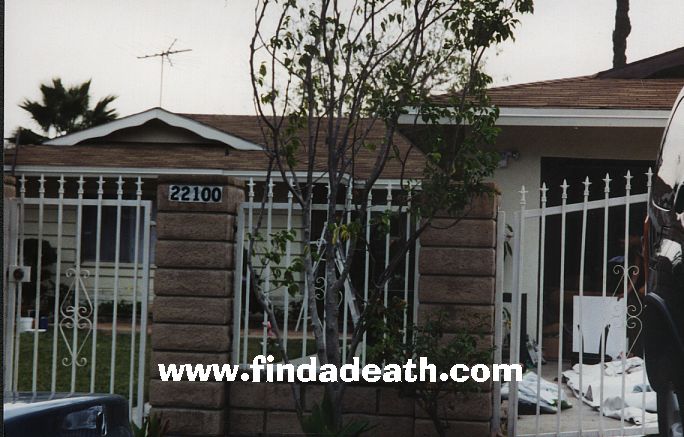 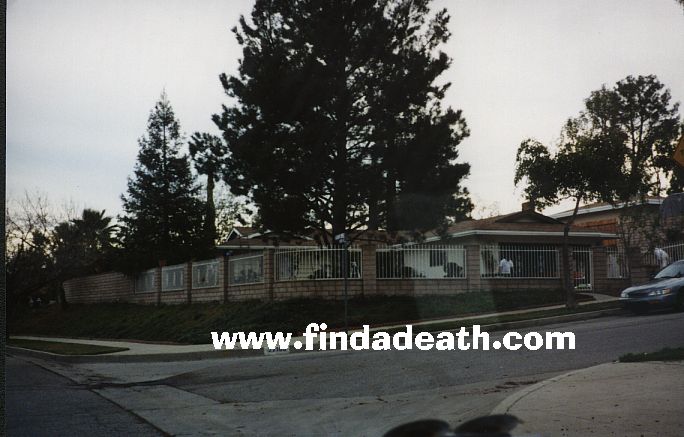 Sadly, everyone knew what a dick Jozsef was. Maria would constantly complain to people that Jozsef abused them.  She spoke of how he threatened to kill them and burn the house down.  He was a mean drunk. People tried to intervene, but to no avail. When Judith started showing outward signs of odd behavior (she plucked her own eyebrows out), it was recommended that she see a shrink. When Judith told the shrink about the abuse at home, alarm bells rang.  The shrink told Maria to call the authorities. Maria did, but not much was done. Jozsef agreed to a divorce, and Maria told people that everything was “under control”.

About 8:30 in the morning of July 27, 1988 a neighbor heard a shot come from the house followed by smoke billowing out. She called 911 and thought, “he finally killed them.”

Judith was sleeping in her nightgown in her canopied bed just a few feet from the pink television set her father bought her as an apology for yanking her by the hair. She was mercifully asleep when he shot her in the head.  Maria heard the shot and came running, still in her own nightgown. He blew her brains out in the hallway. 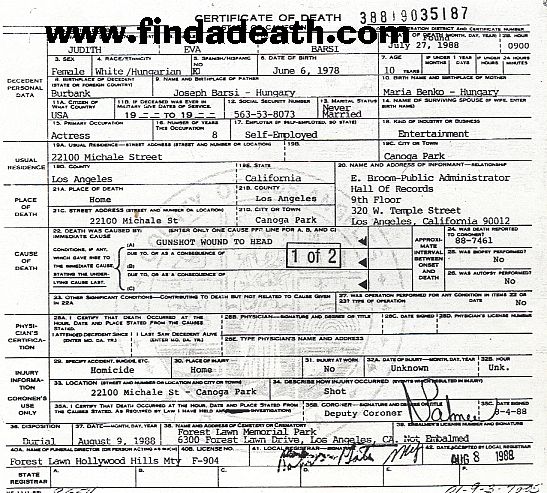 Jozsef then dowsed the bodies in gasoline and set them on fire. Then he walked into the garage and blew his brains out.  Too bad he didn’t do that first.  Dick.

Apparently, he did not dowse Judith with gasoline, because friend of findadeath.com Todd Manning sends us this rather graphic, and surprisingly un gory picture of Judith’s wound.  As always, if you are easily made oogy by this stuff, do NOT click here.  Thank you Todd.

October 2002 Findadeath.com friend E.J. Fleming sends us this:  Actually, her father did try to burn the bodies.  That’s what got the police to the house.  The smoke from the garage got noticed.  He fell on top of the ‘pile,’ actually, and his body got the worst of the fire.  I have copies of the original L.A. Times articles somewhere; they all mention the attempt at burning the body.

Wow EJ, as usual, thanks.

On August 9, there was a funeral at Forest Lawn Hollywood Hills.  Six uniformed pallbearers carried the white caskets of Maria and Judith to their unmarked graves.  I don’t know what happened to the father, nor do I care really.

Her last role was the voice of the lead human role in All Dogs Go To Heaven.

As ever, much gratitude to Steve Goldstein for the photographs, and Mike Steen for the death certificate.  I didn’t know who this girl was, until a few findadeath friends suggested the story.

August 2004 – To any of you that donated dosh for Judith’s headstone, the amount has been raised.  You should feel good.  The kid deserved at least that.