Some stories are so out there, they could only take place in Hollywood. This is another one of those “You Couldn’t Make It Up” stories, starring a man named Laurence Austin, and the famous Silent Movie Theater on Fairfax. Filmmaker Chris Perkins described it as, Sunset Boulevard meets Fargo.

The Silent Movie Theater opened in 1942, and I remember hearing stories of Clara Bow and Charlie Chaplin sitting quietly (not together) unbeknownst to the other patrons, watching their own films. Especially because it’s here in LA, this place deserves to be here forever.  I also remember Austin, he really creeped me out. Plus the organist – and I know he’s a Hollywood Treasure – still alive actually (not any more – died in 2009) – they were both right out of Phantasm as far as I am concerned.  Creep-o-meter in the red.

It was January 17, 1997 and the Silent Movie Theatre was showing the 1927 film, Sunrise. The owner Laurence Austin greeted everyone at the door as usual, shaking hands. There were between 60 and 70 people in the theatre at the time. Austin’s (considerably younger) lover of seven years and also the projectionist James Van Sickle was up in the booth, 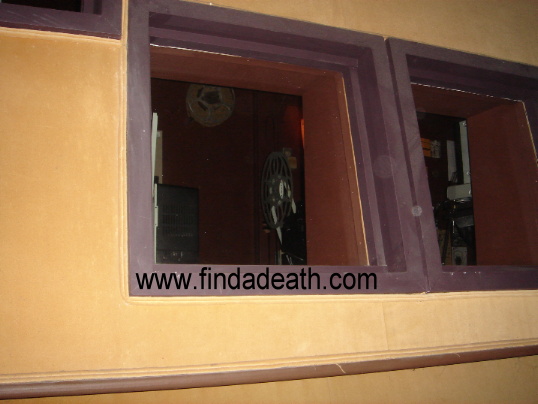 and Mary Giles was behind the candy counter as well. 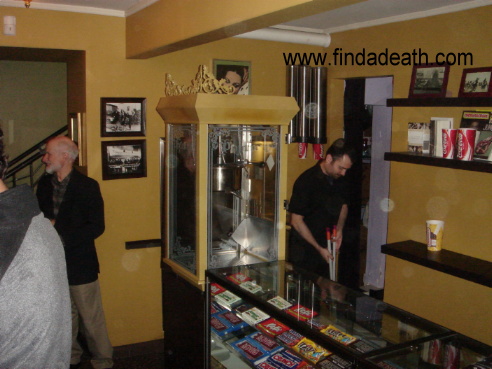 There was another attendee, 19-year-old Christian Rodriguez.  He was no doubt greeted by Austen himself with a smile, (Greetings, man about to murder me!).  Rodriguez entered the theater and waited patiently in the back for the films to begin. He was wearing a golf hat and packing a .357.

When the second short, School Days, began, Rodriguez went to the lobby and asked Mary Giles if he could buy advance tickets. She took him to see Austin in the ticket booth, where Rodriguez demanded money. Austin turned it over, but Rodriguez dropped it and started shooting.

Seconds later the theater doors burst open and the gunman fled down the aisle of the theater firing randomly, 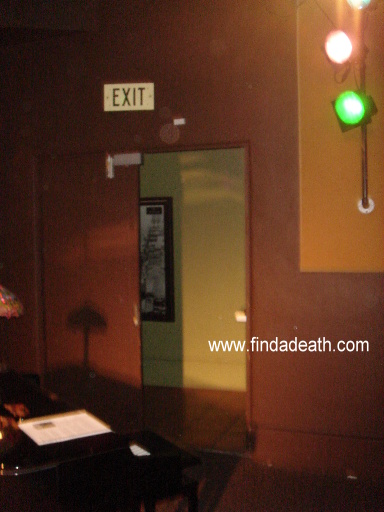 to the back exit.

Austin was shot three times including once in the face at close range. One report stated, his head [was] blown half off, he was showing the inside completely. It was pretty gruesome.,  Dead. Giles was shot twice in the chest. She survived.

There was a memorial for Austin at the Largo Restaurant on Fairfax on Wednesday March 8 at 8 and 10 pm. Seriously.

He is buried in Forest Lawn, Glendale.

So here is the scoop.  Boyfriend/projectionist Van Sickle was reported to be heavily in debt, and stood to inherit about a mil from Austin when he died.  Van Sickey didn’t want to wait, so he hired Christian Rodriguez for $25,000.00 to kill Austin, and an additional $5000.00 to kill Giles and make it look like a robbery.  He then masqueraded as the grieving lover until the police put it together.

On January 17, 2000: The new owner of the theater decided to screen the same murder night shorts and Sunrise, in tribute to Austin. He thought screening them would give the place some sort of closure, and probably also conjure up a bit of publicity as well. Good on him. Of course one or two gadflies had to crawl out of the woodwork proclaiming it “tasteless”. Whatever.  Piss off.

I think a lot of locals were worried about the fate of the Silent Movie Theater, and I believe if they continued to show only silent films, they should be worried. I’m actually thrilled to see they’ve expanded their repertoire to include just about everything. See a show where a murder occurred.  I would, I have and I do.

I’ve heard a rumor there might be a film produced about this event.

PS: were those pics filled with orbs or what?  A very dusty place!

Kudos to Stephen Saban and his article for GLUE magazine, November 1999.