If they can’t hum it after we play it, it’s not for us.

I grew up hating Lawrence Welk. I think it was because my grandmother was living with us, and she loved it. No matter what was on television at the time – we had to watch him. Had to. No choice. I don’t regret it so much in retrospect, but at the time…

His parents were from Alsace-Lorraine, a region of present day France that once was part of Germany. His family then immigrated to Russia in 1878, to escape religious persecution. In 1892, they moved to the United States, and settled in Strasburg, North Dakota. That’s where Lawrence was born.

For an interesting story about Lawrence’s birthplace, and his lack of interest in it, go to this link – on a very cool website called Roadside America.

When he turned 21, he left the family home to try to make it as a musician. He worked without much success, for 25 years. In 1951 he appeared on a Los Angeles TV show, and became a hit. The Lawrence Welk Show ran on ABC from 1955 until 1972, when they dropped him. It was shot at the Hollywood Palladium. 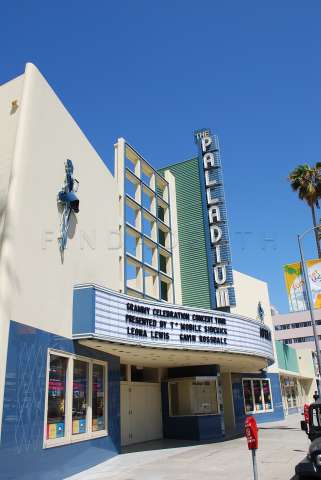 After that, he signed up more than 250 independent television stations in the U.S and Canada, and kept his show on for 11 more years. 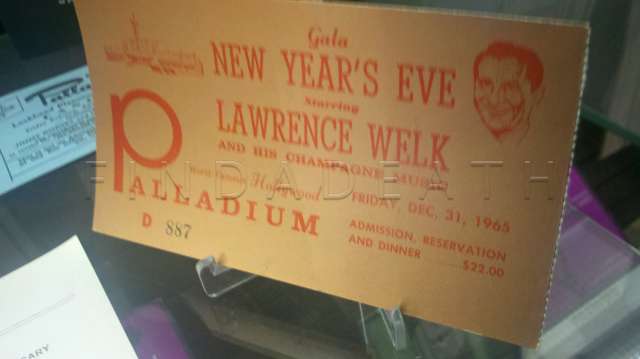 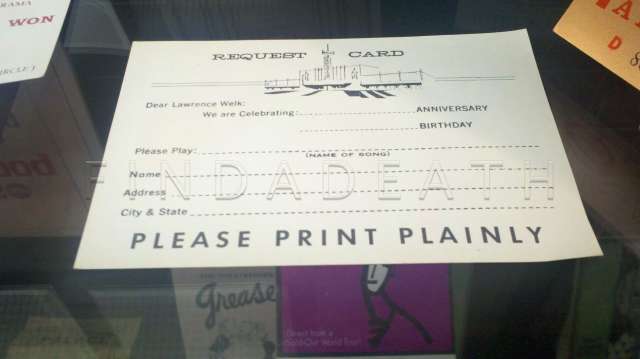 All in all, there were 1542 episodes, until it’s demise in 1982. After that, he did a few performances here and there, until he retired completely in 1989. He and his wife of 61 years, Fern, had one son and two daughters.

Welk was ultra conservative, and made sure his shows reflected only the highest of moral standards. Take the Lennon Sisters (please). They were his big act for most of the initial run. They had a hit with, “The Lady in Blue Taught Me How To Pray.” Nuff said.

He lived on Ocean Avenue, in Santa Monica. 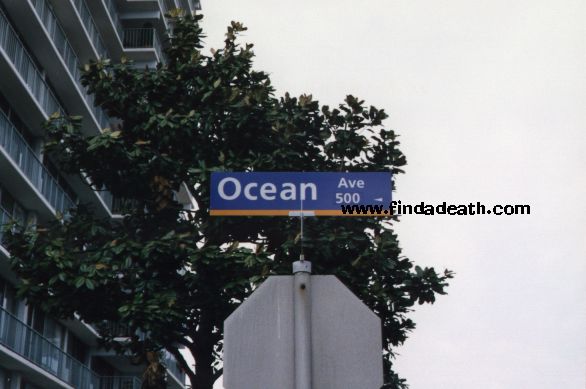 His address was 1299 – in a building called the Wilshire Palisades, nicknamed the Champagne Towers. 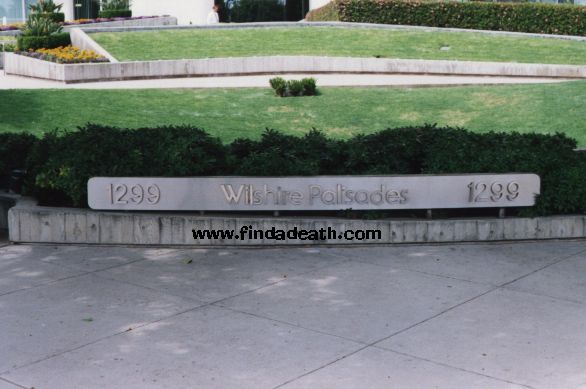 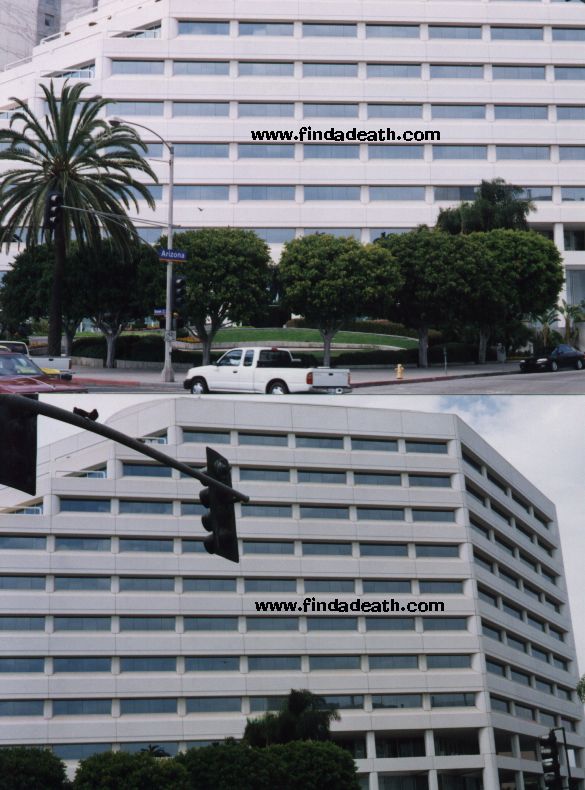 Here is another shot of the building. His apartment/suite/floor (?) Was on the 8th floor. 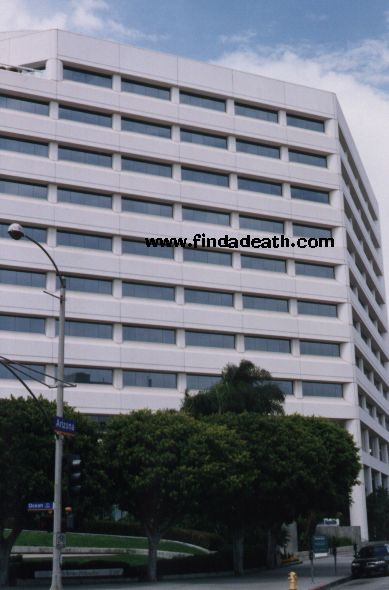 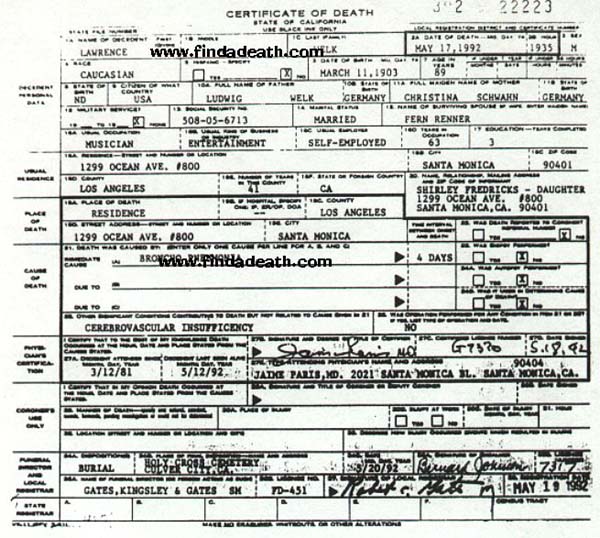 He is buried in Holy Cross Cemetery, in Culver City, Ca.

Trivia: His first band was called, “The Hotsy Totsy Boys.”

More: He was very tight with a buck. Instead of tipping, he would hand out penknives, inscribed with his name.

When he died, he was the second richest man in show business. Bob Hope was the first. Waiting, waiting…

Who could forget the humpy Bobby and Cissy, those oh so cute dancers on The Lawrence Welk Show. Didja know (of course you did) that Bobby used to be a Mouseketeer? If anyone encouraged us yungin’s to hold our banners high (high, high, high), it was good ol’ Bobby.

Welk was a notorious tightwad who would only pay SCALE to his TV cast. The Lennons were paid scale as a “group” for years…until their Dad – Bill Lennon – fought to get them paid scale as 4 individual performers.

Lennon’s Dad was shot to death on a golf course by a stalker obsessed with pretty lil’ Peggy Lennon.

The family was tipped off by the CIA because the nutball would write letters to LBJ complaining that he could not be with his true wife Peggy. He showed up several times at the Lennon’s Santa Monica doorstep — was hauled off and put in nuthouse & escaped again & again, until that fateful day August 1969 when he blew their Dad away on the golf course & then shot himself in his car trunk — filled with magazine clippings and a final love note to Peggy.

The girls were “discovered” by Larry Welk Jr. who had the girls rush over to audition for the old man– home with the flu.

Larry Welk Jr. also dug the Lennons out of retirement in the 1990’s to perform in the Branson MO “Champagne” theatre — his profitable blue hair entertainment venture.

–  Great information Mark.  Thank you so much.

“I was up in Escondido the other day, and happened to pass by the Lawrence Welk Resort. The place has been around since the early 70’s (I remember being dragged there by my Grandma) and has really grown. Anyway, I had my camera with me, so I took some shots of the front sign, 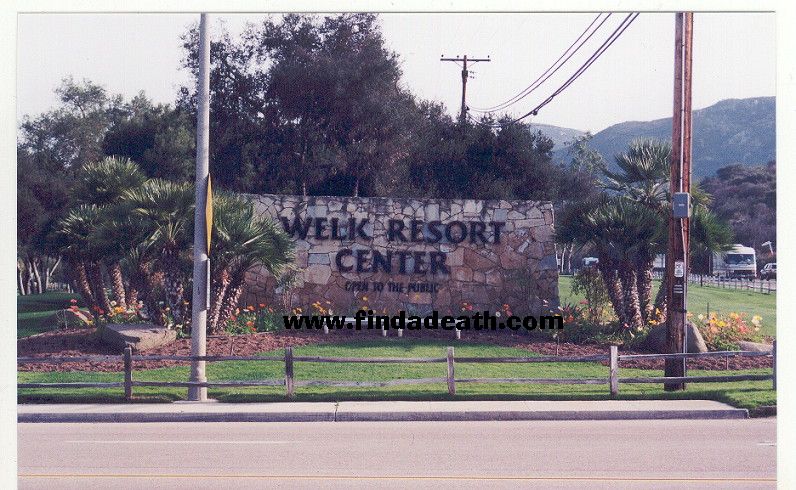 main clubhouse (notice the tacky musical notes up in the background) 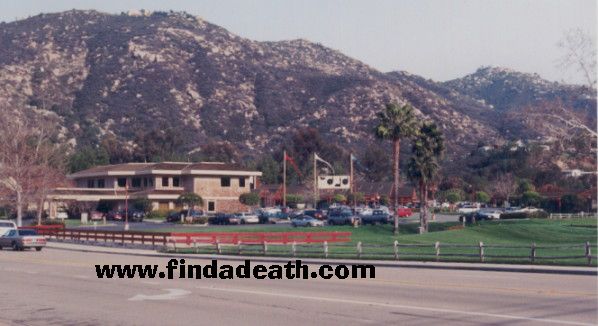 and the sign at the Texaco station at the corner. Sorry, I couldn’t find a mailbox! 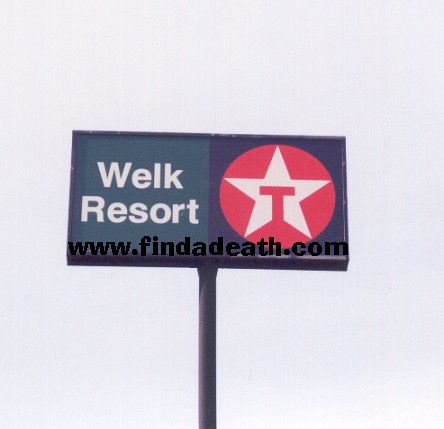 In the lobby of the restaurant there was this weird thing. It was a large round drum type thing and there was a mirror on top. On top of the mirror were Barbie and Ken dolls in
ballroom dancing positions. The mirror went around in a circle, and there must have been magnets underneath because every time one of the Barbie/Ken couples crossed over one they would spin around. It was the weirdest thing I have ever seen!”

An anonymous friend of Findadeath.com sent in this pretty ditty:

What’s the difference between the Lawrence Welk Orchestra and a moose?

Well, a moose has its horns up front and its asshole in the rear…….

My friend Harry sent in this addition to the story: Thanks Harry! I wanted to add a little tidbit about Lawrence Welk in his later years. Back in about 1987 when I was a journalism student at San Diego State, we had to interview a celeb for our feature writing class. I was assigned Lawrence Welk, along with another student colleague.

We trekked up to Lawrence Welk Village outside San Diego to meet him while he was filming the lead-ins for the reruns of his shows. By now, he was in his 80s, and was senile as sin (is that PC?)

We were given opportunities to chat with him in between his reading cue cards. This went on for about two hours, and every time we approached him to talk to him again, his assistant would have to re-introduce us
again, then we would go through the “how do you do,” shake hands, idle chitchat routine before we could go back to the interview. By the fourth time, we had it down pat.

Finally, we finished the interview and headed over to the restaurant for lunch. (And, if you don’t know, the Welk Resort is blue hair city.) We sat down in the dining room and were surrounded by old people right and
left. As I said to my journalism companion, “I wish I had the Porcelana concession here.”

We ordered wine and the drinks were brought out with cocktail napkins that read: “The Welk Resort — Come for a day, come for a night, come for a lifetime.” I turned to my companion and said, “And sometimes it’s all one in the same.”

Hope you liked the tale of my brush with greatness. Cheers!

Great stuff, Harry!  Thank you so much.

First, let me say that you have a great website. Very interesting stuff. I would like to tell you a quick brush with Mr. Welk that I had some thirty years ago. I worked at a local department store (Meier and Frank) in Portland, Oregon. I worked on a freight elevator hauling freight from the dock. On occasion, celebrities would be brought in for book signings. I hauled Carol Channing and Lawrence Welk. Ms. Channing didn’t say a thing or look at me and left no impression. I do remember all the big wigs of the company lining up as if she would think they were important enough to stop for as she walked by; they weren’t (a great laugh). Anyway, I took Mr. Welk up to the tenth floor and he had to wait in the elevator for about five minutes till the room was set up. He was very friendly and spent the entire time talking to me, ignoring his “staff” whom were also in the elevator. He asked me about the Northwest and just general conversation, not at all what I would expect from a celebrity. He was very friendly and polite. This has left a lasting impression on me for years. I never watched his shows (still don’t care for the music), but I was impressed by this man. A real nice guy.

Just thought I’d pass that along. Keep up the good work.