A lot of what makes sufficient numbers of us laugh, me included, is sometimes very broad, very low, grotesque, horrible stuff.

Madeline Kahn was an Oscar & Golden Globe-nominated & Tony Award-winning actress best known for her zany, bawdy roles in Mel Brooks’ classics: Blazing Saddles, Young Frankenstein, and High Anxiety. Off-screen she was an intensely private and shy person who made her home in New York City. When she gave commencement speeches at colleges she often described herself “apart from the herd but able to get sustenance.” She encouraged students to “follow their own vision and not be driven by the herd.”

Madeline grew up in Queens, NY with her mother, a sometime singer-actress named Paula Kahn, who was divorced from Madeline’s father, Bernard Wolfson, a garment worker. Her parents would later amass 5 divorces between them – and Madeline stayed gun-shy about marriage for most of her adult life. Madeline’s mother supplemented her income by giving music lessons and encouraging 5-year-old Madeline to perform for the neighbors. Madeline was sent to Boarding School for 5 years as a teen while her mother pursued her latest husband and showbiz dreams. Madeline escaped her surroundings with role-play and imagination. She told an interviewer that she didn’t like the boarding school very much and “use to hide in the rhododendron bushes and pretend I was lost.”

Madeline earned a scholarship and graduated from Hofstra University in 1964 with a degree in Speech Therapy. She enjoyed starring in her college musicals and during summers worked as a singing waitress at a Bavarian-theme restaurant in the Catskills. A Death Hag on the Find a Death Message Board posts that you can see a framed paycheck belonging to Madeline on display at the restaurant.

She eventually learned a few operatic arias at the request of frequent customers at the Hofbrauhaus. She was invited to perform in a couple of operas – but found that the career of a professional opera singer was too much like being a professional “athlete” (always in training). She happily continued auditioning for traditional Broadway musicals and used her raw vocal talents in Broadway chorus parts. She joined a 6-person comedy revue at the nightclub Upstairs at the Downstairs. Her funny skit as an obliging phone operator for “Dial-A-Deviate” would later be revisited in Mel Brooks’High Anxiety where Madeline played along with a phoning heavy breather. “What are you wearing? Jeans? I bet they’re tight.”

A role in the Broadway musical Two by Two attracted the attention of a casting director – which led to her feature film debut in Peter Bogdanovich’s What’s Up, Doc? Madeline was more than happy to leave the Broadway show and her nasty co-star Danny Kaye for work in Hollywood. Years later she was asked to star opposite Danny Kaye in another Broadway show and made no bones about telling producers: “If you hire him, you lose me.”

After her star turn as THE Eunice Burns, Ryan O’Neal’s shrill and hysterical girlfriend in What’s Up, Doc? – Bogdanovich cast her as Depression-era floozy Trixie Delight in Paper Moon. She was nominated for an Academy Award for her second film role.

Once a chubby teen, Madeline battled self-esteem issues that were exacerbated by her early film roles where she was cast as frumpy or blowsy broads. She turned to therapy in the 1970s to find herself. “In Hollywood I thought I was large and klutzy, like the characters I played,” she told an interviewer. Even on talk shows (like The Tonight Show with Johnny Carson) she felt compelled to deliver the character traits of her on-screen crazies. “I never acted kooky, but I did fill a time slot slated for a woman who was expected to display interesting neurotic behavior.”

After her Oscar nom buzz, Madeline was asked to play frumpy knocked-up secretary Agnes Gooch in Lucille Ball’s film musical MAME aka MAIM.   Director Gene Saks said that Lucille Ball started criticizing Madeline’s voice on the first day of rehearsals finally asking, “When are we going to see your interpretation of Gooch, dear?” Madeline grinned icily back at Ball and replied, “You are seeing her, dear.” Lucy reportedly said “Oh” then asked for a private meeting with Saks where she broke out the crocodile tears and insisted that Madeline be replaced by the stage Gooch, Jane Connell (age 50). Like Lucy as Auntie Mame, Jane Connell was now also too old for the part. The film flopped. Madeline later told an interviewer, “It was devastating. It didn’t turn out to be a tragedy – it cleared me to be available for Blazing Saddles.”

Mel Brooks would later say that Madeline Kahn was “one of the most talented people that ever lived…you can’t beat Madeline Kahn.”
Brooks took Madeline away from her early frump roles and racheted up her sex appeal in a series of hysterical lusty roles in Blazing Saddles (Lily von Shtupp), Young Frankenstein (Elizabeth – the taffeta wearing fiancee), High Anxiety (LOVE LOVE LOVE Victoria Brisbane- the cocker’s daughter) and History of the World, Part 1 (Empress Nympho). Madeline made magic in these films from 1974 to 1981 and they garnered her a legion of fans and admirers.

She answered fan mail and gladly sent autographed photos to her fans throughout her career.

Her guest appearance on SNL in 1976 was filled with delightful moments – including this one with Gilda Radner.

The SNL sketch with Madeline as “Marlene Deutchland” and Gilda as “Baba Wawa” is a classic example of the brilliant Saturday Night Live cast.

Madeline went on to do more film, stage and TV work throughout the 1980s and 90s and became known for her professionalism. (“I have appeared in crap…but I never treat it as such. Never!” ). Her funny but nuanced and endearing portrayal of an affluent Jewish suburban matron in the Broadway play The Sisters Rosensweig earned her a Tony Award in 1993. Her final film role was in the indie film Judy Berlin (1999) where Madeline showed that underneath her amusingly frazzled housewife character was a woman with a core of strength and joie de vivre.

Madeline told the NY Times that if she could have had another career it would probably have been as a therapist. “People have always told me that’s what I’d be best at,” she said. “I like to listen.”

In 1983, Madeline had starred in her own short-lived TV sitcom called Oh, Madeline! but later found a steadier TV gig as Phylicia Rashad’s pal on COSBY for 3 seasons (1996-1999). While shooting the NY-based sitcom in Fall 1998, she was diagnosed with ovarian cancer (the same disease that claimed the life of her friend Gilda Radner). Madeline endured three rounds of chemotherapy, three surgeries and experimental treatments for the “notoriously hard to detect and resistant to treatment” cancer.

Her work on Cosby was reduced to only 4 episodes in the final season.  Bill Cosby stopped being annoying long enough to be devastated over his friend Madeline’s illness.  Madeline thanked “the entire extended family on Cosby who moved heaven and earth to make me feel as comfortable as possible” these past few months.

Despite being desperately ill (or because of), in October 1999, Madeline married her partner of 10 years John Hansbury.  She managed the strength to stand for the ceremony, and her voice, which had been reduced to a whisper in recent weeks, spoke loudly and clearly, “I do.”

“Only happy tears today!  Anyone looking sad, doesn’t get any wedding cake!”

They lived in Madeline’s (6 room, 2 bath) Park Avenue apartment home in New York City. (Here is a photo of the building and a typical floor plan). 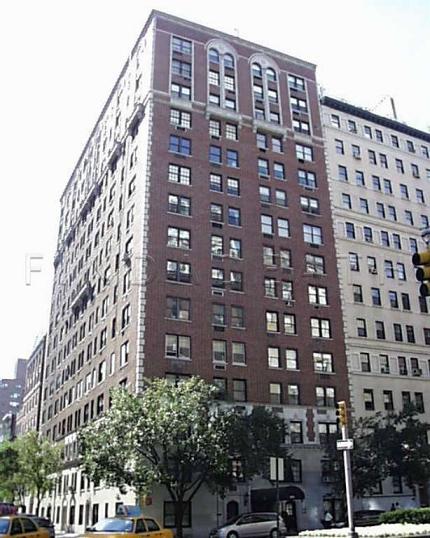 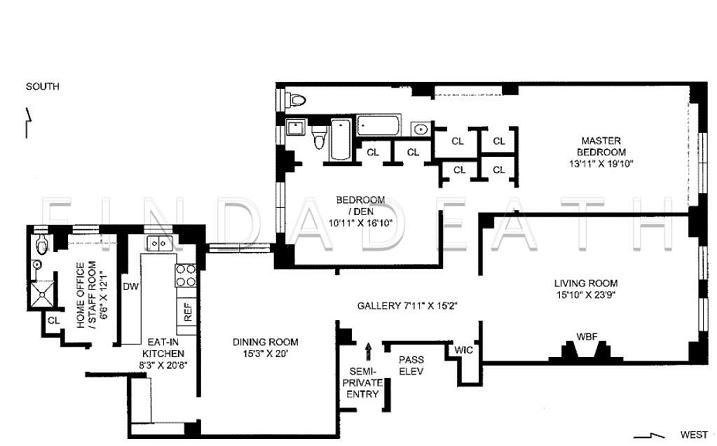 On Nov. 4th 1999, Madeline made a public statement about her cancer battle. “It is my hope that I might raise awareness of this awful disease and hasten the day that an effective test can be discovered to give women a fighting chance to catch this cancer at its earliest stage.”

Three weeks later, Kahn entered Mount Sinai Hospital in Manhattan for her latest dose of chemotherapy – where she stayed and fought until the end. 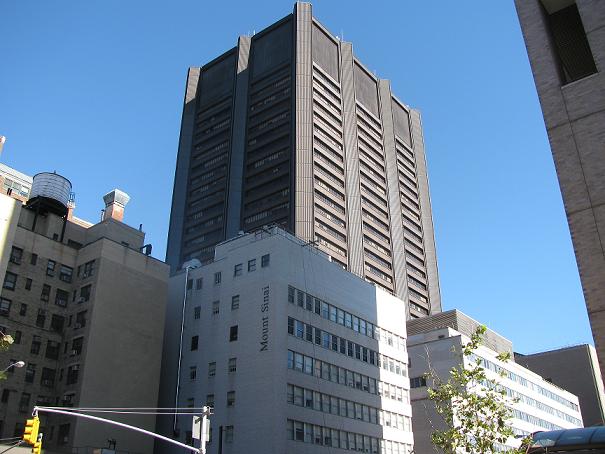 She died on December 3, 1999 at the age of 57. By her side were her husband and her brother Jeffrey. 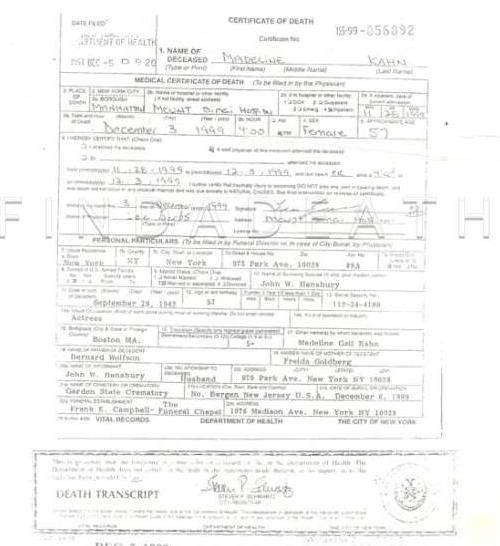 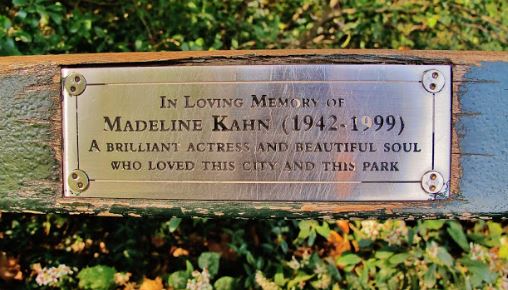 She was cremated and a Central Park memorial bench (#0157) was purchased in her honor. Located near the reservoir at West 87th Street in Central Park, the bench dedication reads:

MADELINE KAHN 1942-1999. A BRILLIANT ACTRESS AND LOVELY SOUL WHO LOVED THIS CITY AND THIS PARK.

An annual fundraising comedy night called “Stand Up for Madeline and OCRF.org” is held in Manhattan to raise money for the ovarian cancer research fund.

Since 2002, the charity event has raised nearly half a million dollars for OCRF’s research projects. Each year, ovarian cancer claims the lives of 15,500 women in the U.S. Currently there is no effective means of early detection. Why not consider a donation in Madeline or Gilda’s memory?