If you truly dig what you are doing, if you lay it out that way, nobody can not respond. That’s what rock and roll is; it’s relentless.
My role in the Mamas and Papas was basically just to sing.
Probably the biggest bring-down in my life was being in a pop group and finding out just how much it was like everything it was supposed to be against.
When you’re famous, you don’t get to meet people because they want you to like them when the present themselves to you, and you don’t see the real people.
If you really think you’re right, you should tell it.
When you’re on stage, you gotta do it. People pay to see you, and they deserve to be entertained, and you should go out there and really give it your best shot. And that’s quite a challenge.
You have a new audience for every show. Even though you do the same thing all the time, you gotta keep it fresh for yourself, and you gotta keep it good and interesting and something you want to do. I’m anxious to have a really terrific act. Whatever it takes it takes.
There’s so much talk about the drug generation and songs about drugs. That’s stupid. They aren’t songs about drugs; they’re about life.
I’ve always been so apathetic. I figured, OK, maybe the world is going to fall down around me. Now I want to make a better world… that’s motherhood.
I’ve been fat since I was seven, and being fat sets you apart.
Show More Quotes
Show less

Cass’s London flat, from the INSIDE!

Cass Elliot, or Ellen Naomi Cohen as she was born, was most famous as Mama Cass, from the singing group, the Mama’s and the Papa’s.

Findadeath.com friend Jim Ed Green sends this info:  Cass was a real smart lady, with an I.Q. of 165. Also, she had a hell of a time getting into The Mamas and Papas. In his biography “Papa John”, John Phillips says he was reluctant to let Cass into the group, not only because of her size, it was also because her alto voice couldn’t hit the high notes John wanted for the group sound. She would follow the band everywhere, getting jobs wherever they played, just to be around. Then, one strange day, Cass was walking past a construction site when a lead pipe fell and hit her on the head, knocking her out. After three days in the hospital with a moderate concussion, she joined a rehearsal the band was having- and she could hit the high notes John wanted!  Cass was then, finally, invited to join The Mamas and Papas. 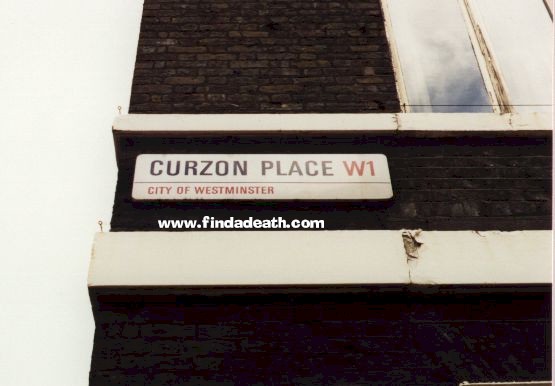 in the Mayfair district of London. A brown, unassuming apartment complex. 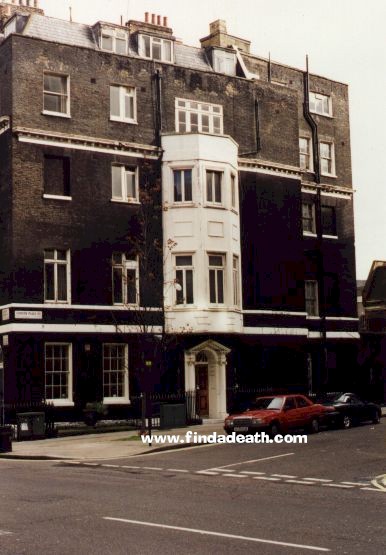 Cass would enter the building 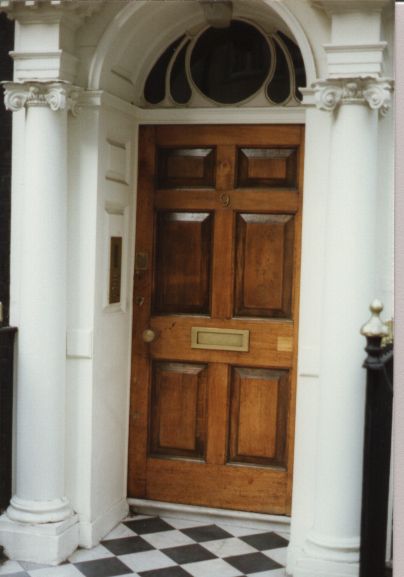 and walk the stairs to flat number 9. 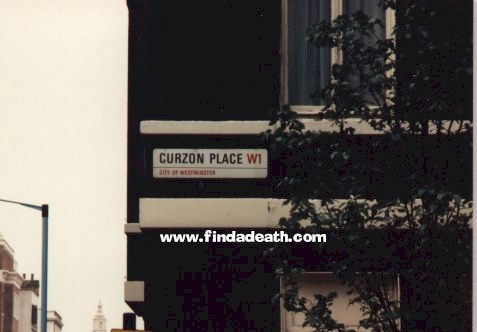 Cass was in the UK, performing her solo show to sold out audiences at the Palladium. 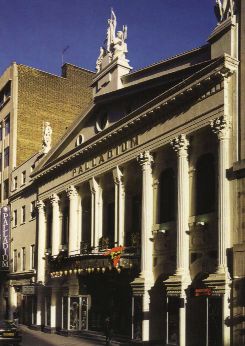 She had left the group “The Mama’s and the Papa’s” in 1968, and was branching out on her own, with solo albums, a role in the 1970 film “Pufnstuf” and a guest spot on “Scooby Doo”. According to fellow “mama” Michelle Phillips who says she had spoken to Cass the night before she died, “She had had a little champagne, and was crying. She felt she had finally made the transition from Mama Cass.” She died on the 29th of July, 1974 at age 32. The rumour about her choking on a sandwich began with an article in the London Times shortly after her death.

Official Cause of Death: Fatty Myocardial Degeneration due to Obesity. Natural Causes. 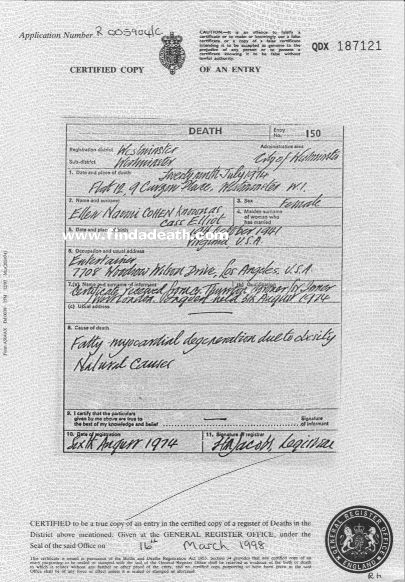 Cass’s body was flown back to the United States, and was one of the last cremations performed at the former Hollywood Memorial Park, and is now buried in Mt. Sinai Cemetery, Los Angeles, CA. Court of Tanach, Lot 5000, Grave 2F.

Trivia: Cass was arrested and spent a night in a London jail for allegedly stealing 2 blankets and 2 keys from the Embassy Hotel , earlier in the year. 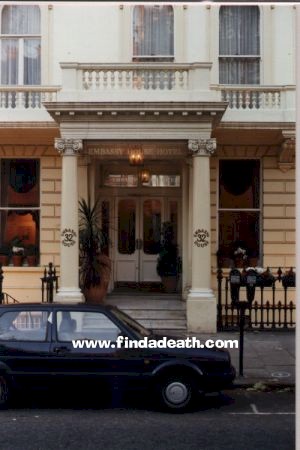 Upon her release, Cass stated to the press, “Your policemen were wonderful, but I don’t think much of your jails. There weren’t enough blankets!”

First off, I never knew Cass had a daughter.  She “shocked the world” by having a baby at the height of TM&TP’s success in 1967, and, just as shockingly for the times, never revealed who the father was.  Owen Elliot stepped up with the other three members of the band in her mother’s place when they were inducted into the Rock and Roll Hall of Fame in 1998.

But this is what really chafed my nuts:  Denny Doherty, the second guy in the group, talked at length (as did John and Michelle Phillips) about how much Cass was in love with him.  It was totally one-sided. Denny had a thing for Michelle, and eventually wound up having an affair with her (who didn’t?) while she was married to John.

While John and Michelle were split (the first time–before they reunited just long enough to have Chynna), John and Denny actually lived together so they could keep an eye on one another!  No matter, though:  that slut Michelle was off boffing some other dude or two.  All the while, Cass is carrying a torch as big as Lady Liberty’s for Denny.

After the group began to unravel and she struck out on her own, SHE ASKED HIM to marry her.  He turned her down.  It was pretty apparent from everyone that she never recovered from the rejection.

So what’s so maddening about it?
This DICK-DICK-DOUBLE-DICK is now touring the US and Canada with a one-man show called “Dream a Little Dream,” where he sings, pays tribute to, and makes money off of the woman whose heart he broke in a million pieces.  As my dear friend Rhonda would say, “THAT takes balls the size of church bells.”

OK, In fairness to Denny, findadeath.com friend Sandy sends this in:

Denny Doherty is a great guy!  He loved Cass with all his heart and considered her his best friend in the world.  He just was never in love with her in the romantic sense.  He was wise enough to be honest with her. Their great friendship did not end with Denny’s rejection of Cass’ marriage proposal.  The rejection did make Cass see reality and allowed
her to get on with her very short life.

Denny’s show is very respectful of Cass and showcases her many contributions to the music world.  It is the story of The Mamas and The
Papas, warts and all.

I truly resent that a man of such talent and grace is slandered right there on the page devoted to his best friend.  Denny brought much
happiness into Cass’ life and I think that is what should be remembered.

AND MORE! From findadeath.com friend Frani:

This is in reference to Ted’s update. I remember when I was in 3rd grade, at the class Christmas party, we were asked to bring our favorite albums. This was 1972. Anyway, a classmate, brought The Mamas &Papas album. At the time, I really didn’t know who they were. Anyway, I think it was the very next year, that Cass Elliot had a TV special called “Don’t Call Me Mama”. I remember one of the last lines in the show was, she said. “Don’t call her Mama, anymore. That’s for her daughter.”

Last but not least department, from Ted:  Just read the rebuttal to my Mama Cass contribution
from Sandy.  Please add a little response from me if
you would be so kind:

“Sorry Sandy.  I guess I didn’t have the whole picture.  Forgive a bitchy old queen, won’t you?”
Love,
Ted