Bolan was a self made pop icon, and one of the original Glam Rock stars in England. Born Marc Feld, he had a brief career as a superstar with his band T-Rex, but was eventually reduced to hosting a Children’s TV series. On the night of September 16, 1977, Marc had dinner with his love Gloria Jones, with whom he had a 2-year-old son Rolan. After much merriment, Gloria got behind the wheel of her purple Mini 1275 GT (license plate FOX 66IL) to drive Marc and herself home. This was about 4am. Shortly thereafter, the Mini was traveling on  Queens Ride, 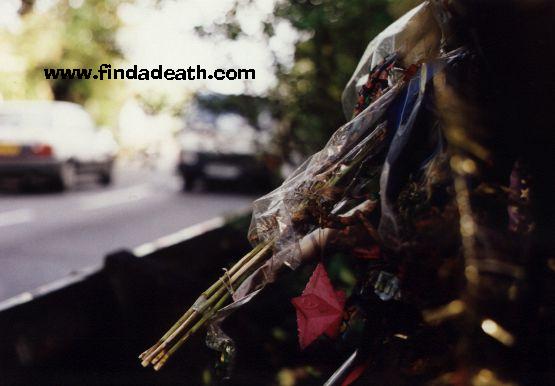 at the southern edge of Barnes Common, south London. The Mini left the road as it crossed a hump backed bridge, shot through the fence and smashed into a sycamore tree. 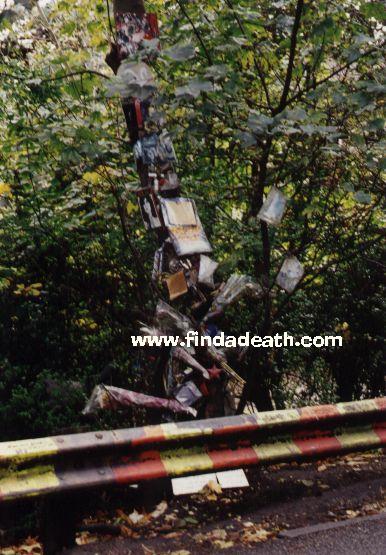 Marc’s side took the impact, 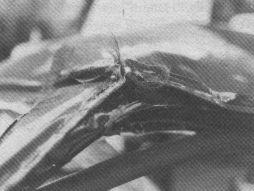 and he was thrown into the back of the car, and killed instantly. Gloria was unconscious but alive.

Official Cause of Death: Shock and Hemorrhage due to multiple injuries consistent with Road Traffic Accident. Passenger in a private motor car which collided with a tree. Accidental. 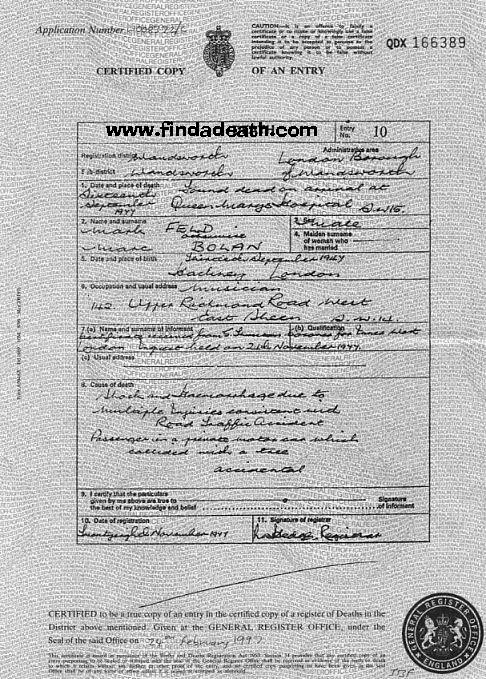 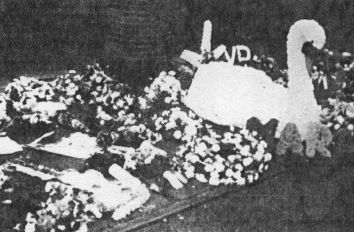 His ashes are spread under a rose bush in the   Keats Rose Bed, at Golders Green.

On the 20 anniversary of Marc’s Death, their son Rolan, who has no memories of his father, unveiled a monument at the site of the crash, and announced plans to launch his own rock and roll career. 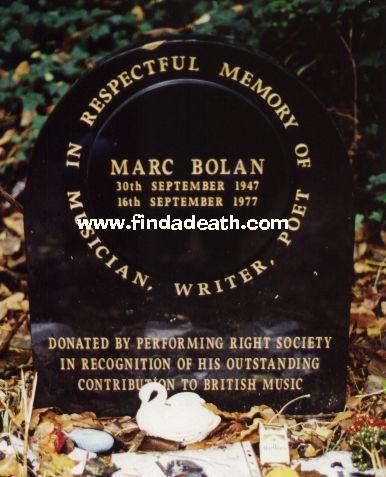 Marc historian FEE clears up the curse story:  There seems to be a curse on people associated with Marc Bolan. Steve Took (founder of Tyrannosaurus Rex with Marc Bolan) choked to death on a cocktail cherry in 1980. Steve Currie (Member of T.Rex) was killed in car crash in Portugal in 1981. Both his parents died in 1991. Hearts attacks ‘claimed’ the next three people: Marc’s widow June Bolan (nee Child) in 1994; his manager Tony Secunda in 1995 and Tony Secunda’s ex-wife Chelita Secunda in 2000. (She was the one credited for putting the glitter on Marc’s face and thus starting Glam Rock). Four people associated with Marc died in 2001: Muriel Young (Producer of the Marc Show); his manager Tony Howard; Richard Jones (Gloria Jones’ brother) and Joey Ramone (personal friend). Alphi O’ Leary (Marc’s chauffeur & minder) died in 2002. Mickey Finn (Member of T.Rex) died from liver problems in 2003. Peter (Dino) Dines (T-Rex Member) died in 2004 and Official Born to Boogie photographer Keith Morris was ‘lost at sea’ in a diving accident in 2005. Even some of his fans have been affected including Nikki Sudden (real name Adrian Nicholas Godfrey) died in 2006 aged 49 and Paul Johnson who ran ‘The Bolan Society’ died in 2007 aged 48.

In 1999 TAG (T-Rex Action Group) was granted an in perpetuity lease on the site with ownership of ‘The Bolan Tree’ itself and has cared for and improved the site since then.

In September 2002 Rolan Bolan unveiled a Bronze Bust of his father at the Tree Site. 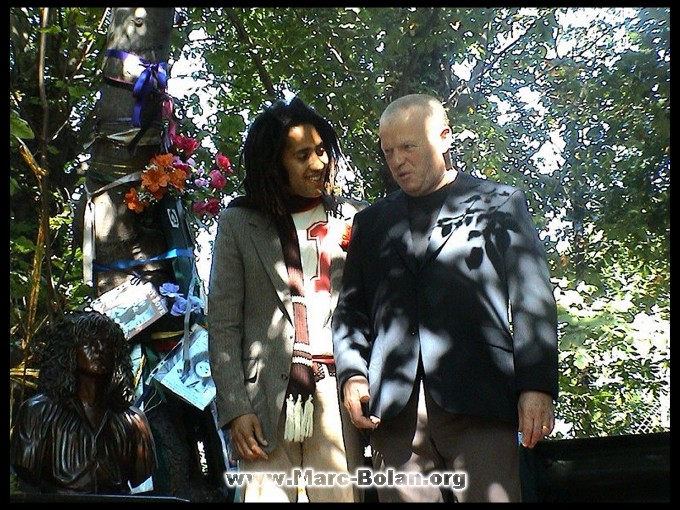 In 2007 the site was Officially Recognized as Marc Bolan’s Rock Shrine by the English Tourist Board in their Guide ‘England Rocks’. 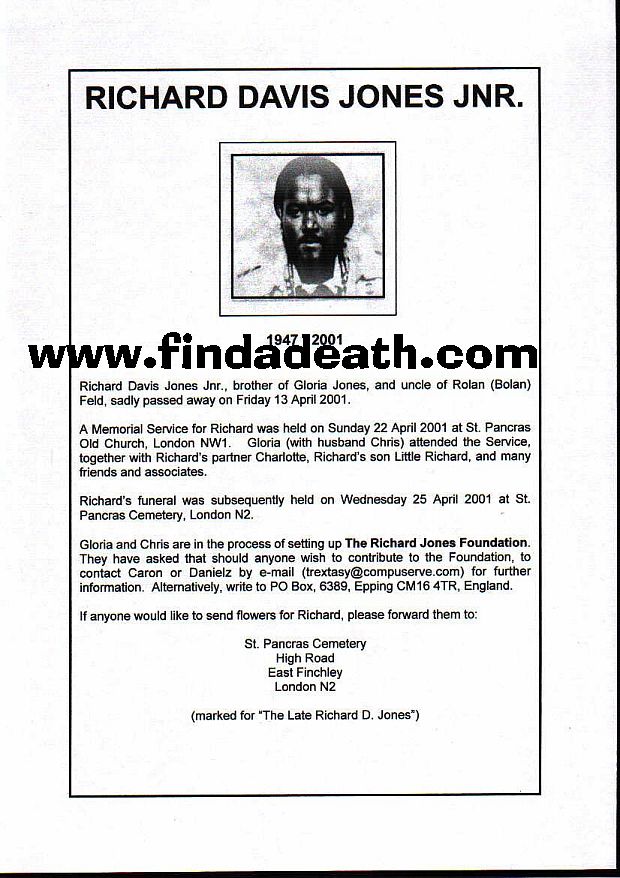 Bolan was a lifelong fan of cars, especially American ones and wrote many songs that featured them prominently in the lyrics. I’ve heard that Cadillacs were among his favourites.

Despite this fact, he never actually learned how to drive one. The reason he was the passenger
in the accident was because Gloria was the only one of them that could drive.

Also some more details about the last few years of his life:

His career had taken a serious downturn from the massive successes that he had had with the earlier lineups of T. Rex. Unlike his good friend David Bowie, Marc had not learned the reinvention game very well. With the albums Bolan’s Zip Gun, Zinc Alloy, and Futuristic Dragon he’d dropped further and further on the charts to the point of nonexistence.

In the last year of his life he released a final album, prophetically titled “Dandy In The Underworld”, that semi-autobiographically chronicled his fall from grace.

He was beginning to get the hang of reinvention during that last year though, because he was making inroads into the punk world, even going so far as to christen himself something like the “original punk.” Surprisingly, many of the UK punk bands had grown up on his music and supported him in this to some extent.

Bolan’s last single was the ironic “Celebrate Summer” which had the refrain “Summer is heaven in ’77”. Little did he or anyone else know that shortly after the end of that  summer, Bolan would be dead.

Two more things I’ve read along the way, check them out as you will, I can’t remember my sources now:

1) 3 days before his death Marc and David Bowie played together on Marc’s BBC series. During this performance the stage turned out to be too small for the two flamboyant performers. Marc got a little too close to the edge and fell over it, perhaps in a final sign that Bowie was destined to become the full legend in life that Marc would sadly never have the chance to be.

2) David Bowie once went to some sort of palm reading or something along those lines and was told that He, Jimi Hendrix, and Marc Bolan were some sort of mystic phenomenon that was only destined to be here for a few years. At the time it was laughable, as Hendrix was the only one who had passed. After Bolan’s death Bowie was devastated and fairly scared. Luckily whoever the prophetic individual was turned out to be only 2/3 right as Bowie is still alive and performing today, some 25 years after Marc Bolan’s death.

Thanks for cheering up this page, Rodney!