When Michael died I was tipped over the edge. I was beyond grief.

This poor chick had been used and abused. I feel  like she was an okay kinda gal, that got caught up in a lifestyle that was too much for her. The beginning of the end for her, was when her boyfriend Michael Hutchence of INXS died in 1997 – under very unusual circumstances, in a Sydney hotel. I will do a Michael story, when I find a Findadeath.com friend in Australia. Personally, I think he died doing the auto erotic asphyxiation thingy, but the coroner insists it was suicide. Paula felt the same, that it was a sex game gone bad, and it drove her nuts trying to prove that it wasn’t suicide.

After Michael died, Paula hit the skids. Big time. I really think they were in love, well, at least she was. They had a daughter, and named her Heavenly Hiraani Tiger Lily. Weird? Well, her other kids, with stinky rocker Bob Geldof, have the names Fifi Trixabelle, Peaches, and Trixie (whoops, its Pixie, not Trixie.  Thanks for pointing that out Alan Boyle and Dave Burt.  Note to self – do not drink and update.). Poor kids. Anyway, I’ll try not to get bogged down in too many irrelevant details.

Paula lived with Tiger Lily in a home in St. Luke’s Mews, in the Notting Hill section of London. 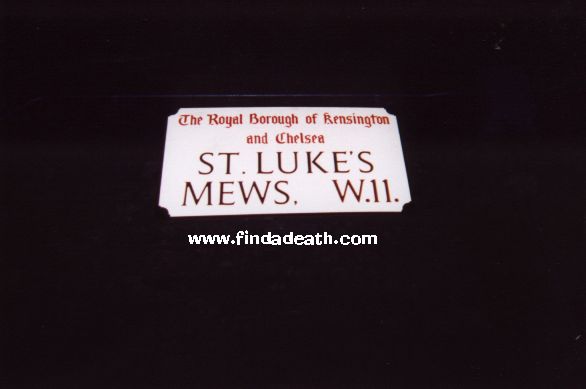 Here is their house. 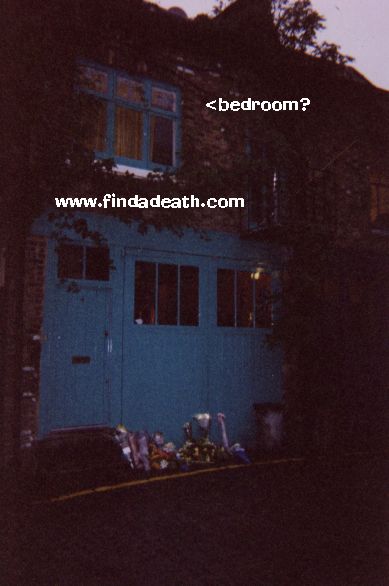 On Saturday September 16th, 2000, Paula was going about her business. She had a strange habit of going to the local off license (liquor store) 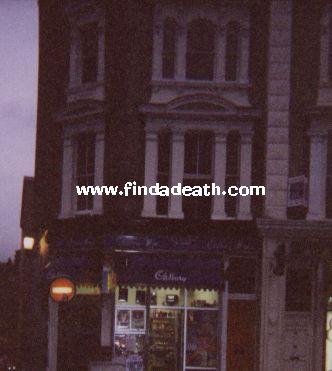 in the nearby Westbourne Park Road, 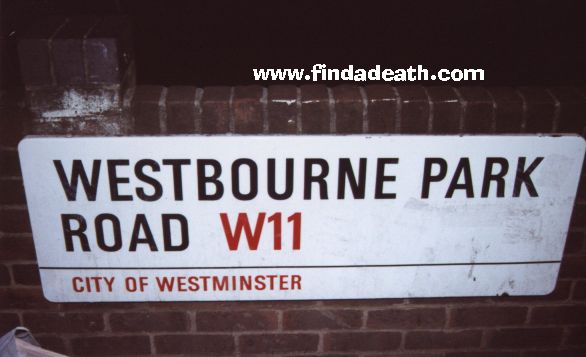 and buying tiny bottles of vodka (I am not a drunk. I am not a drunk.), sometimes up to 6 times a day. This day was no different. Around 2pm and 4pm, again around 6pm, then 10pm, she wandered over (its only a 2 minute walk) barefoot (very odd) over this crosswalk, 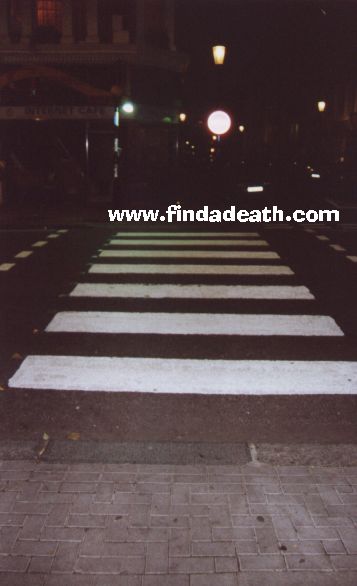 and bought little bottles of vodka. At the 10 o’clock stop, store owner Zhahid Shafi  said she was “barefoot, her hair was scruffy and thought she wasn’t very drunk, she was certainly tipsy.” “She was very, very down and speaking slowly. I asked her, ‘Do you need help?’ She said, ‘I’ve got problems but I’ll be OK. I’ll see you tomorrow. I’m in a hurry.’ She bought kitchen cleaner and furniture polish. They were the last legal substances she would buy. Here is a picture of the door of the shop, note the headline of the newspaper ad. This was less than 48 hours after her body was discovered. 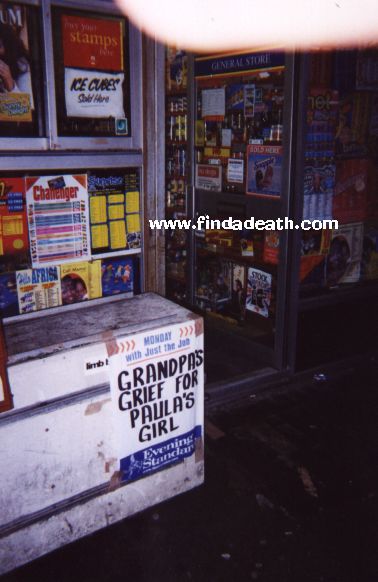 UPDATE Monday Sept 25 – Myself and my buddy Ryan went back to Paula’s house on Saturday evening.  First we stopped in a few pubs, so we were pretty juiced, then we went to the off license.  I went in and asked for a “bottle of Paula Yates vodka.”  I know.  How ashamed am I?  Okay, not much.  He sold me this bottle. 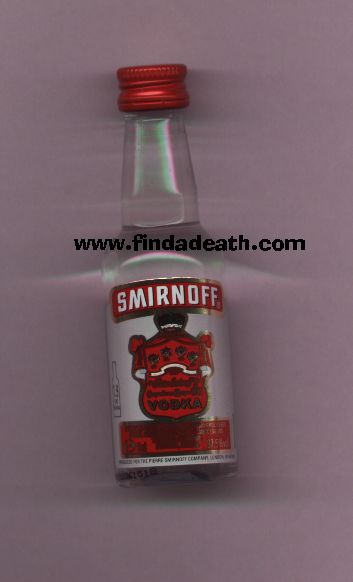 Remember, this is the evening of her funeral.  God, I’m tacky.  Then I asked the guy behind the counter about Paula.  He said she was a very nice woman.  Then he said, and I swear you cannot make this shit up, “I’m going to miss her.  She was a good customer.  I’m going to lose a lot of money.”  We were buckled over laughing.  Okay, its not that funny, but how funny!

On Sunday morning the 17th, a friend called Paula. Little Tiger Lily answered the phone. She said that she couldn’t wake her mother. Nuff said. Paula had basically been on suicide watch for a couple of years since Michael died. Once she tried to hang herself. So the friend rushes to the house to find Paula in the bedroom laying in her own vomit. She called the ambulance at 10:10am, and they arrived shortly thereafter. Paula was pronounced dead at 11:15am. They removed her body  from this front door. 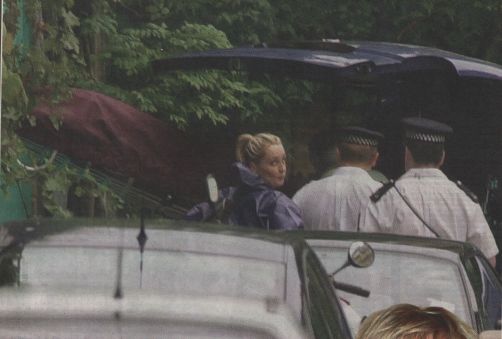 from the house, from this front door. 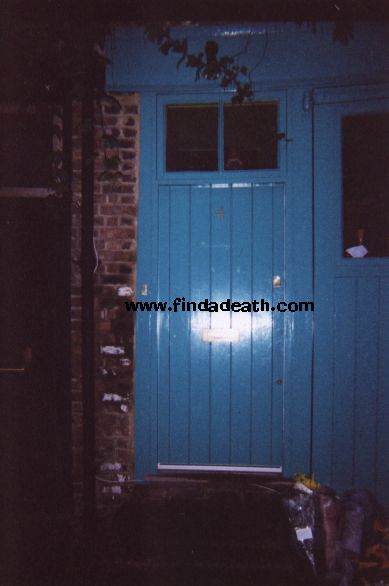 They found heroin, pot, and a ton of tiny vodka bottles around her. Her body was taken away for an autopsy. Their results are inconclusive, but we’ll know more eventually. No funeral plans yet, but I’ll bet she’ll be cremated and somehow scattered wherever Michael Hutchence is. Some say that Paula had some of Michael’s ashes in a pillow in her house. I don’t know… It’s all too much really. When I get all the info, I’ll post it.

Most of her friends agree that Paula did not commit suicide, but that this was an accidental overdose. Nevertheless, it was extremely irresponsible and totally fucked up, especially with a kid involved.

The media is now making this woman out to be some sort of sad case, which she was. Sadly, this is the same media that totally destroyed her. They picked at her every fault, at any given chance. This girl couldn’t sneeze without some story surfacing about her being a coke head or something. I honestly believe that they are at least partly responsible for what happened to her. And that is my soap box speech.

A lot has been made out about Paula’s last public appearance at the premiere of the Madonna film, The Next Best Thing. I sat behind her at that, and she was fine. Not at all like people made her out to be. Drunk, out of control and asked to leave. True, she did leave, but she wasn’t at all out of hand.

On a final intrusive note, when I went to the house yesterday, I stuck my camera in her window. 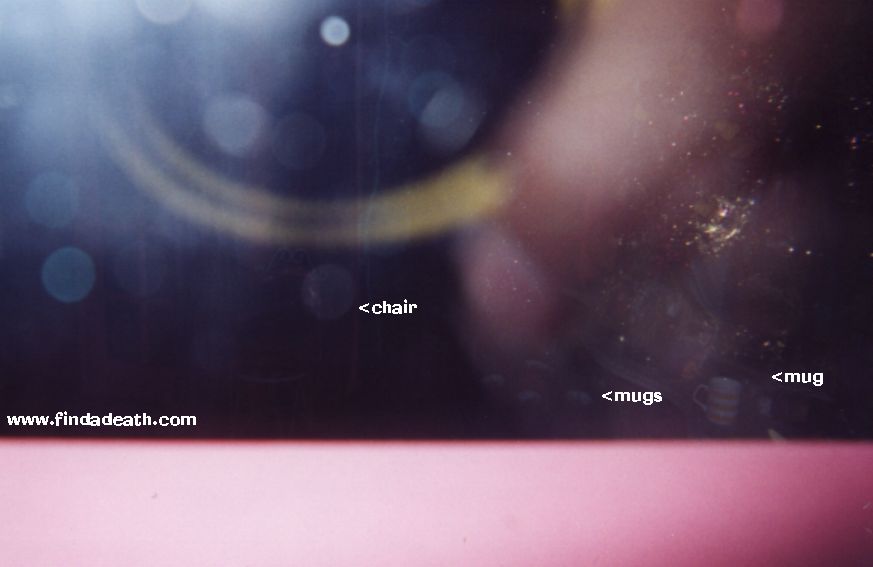 Not much to see, but a few Paula artifacts are visible.  Poor woman.  To have to deal with whores like me, picking through her life.  Still, it is fascinating, isn’t it?  We wouldn’t be here if it weren’t.  Unfortunately, the Princess Diana syndrome has not gone away, and strangers are leaving flowers for Paula. 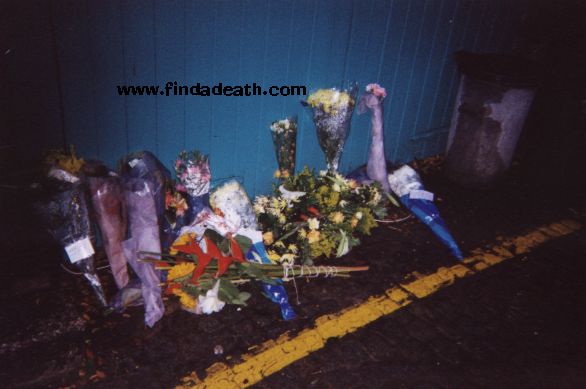 A sweet sentiment, but I really don’t get that.  They didn’t know her, and never will.  Give the money for the flowers to church or buy one of those dull, homeless magazines.  Flowers are pretty, but not laying in some alley, just waiting to be pitched out.  It’s just a waste.  Soap box statement number two over.  And out.

So the funeral was last Saturday, at the Church of Mary Magdalene (appropriate) beside the Davington Priory near Favisham, Kent.  Loads of celebs attended including Annie Lennox and Dave Stewart (they were best man and maid of honor at Paula and Bob Geldof’s wedding), Jools Holland (a charmless British presenter), Paul Young (not the dead one, obviously), Simon and Yasmin Le Bon, Midge Ure, Rupert Everett and (ugh) Bono.  Bono sang Blue Skies. Other hymns played were I Vow To Thee My Country and Jerusalem.

Paula was in a white casket, covered in Tiger Lily’s. 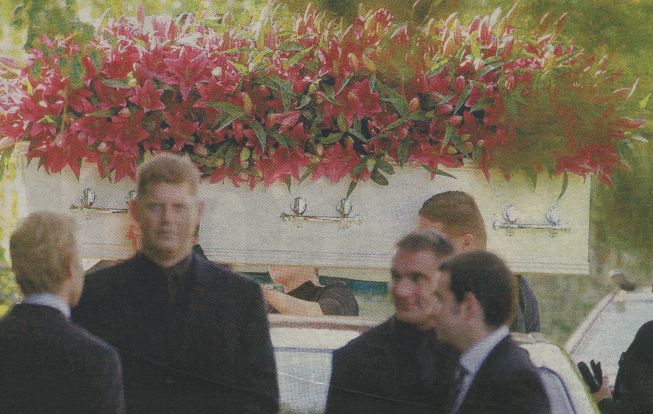 On it was a note that said, “I Love you Mummy,” from her daughter Tiger Lily.  Supposedly, Paula was wearing a two piece mink bikini that she loved, but the people at the Chelsea Funeral Services denied that and said she was wearing “normal clothes.”  The service lasted 55 minutes, and to top it off, while taking her casket from the church, a recording of These Boots are made for Walking, sung by Paula herself, was played.  This supposedly cracked everyone up.  Bob Geldof was in charge of the arrangements, and to his credit, it sounds like he did a bang up job.  Well done, Bob.

After the service, the hearse took Paula to the Kent County Crematorium to be cooked.  Another alleged incident was the fact that Paula supposedly wanted to be cremated with that pillow that had Michael Hutchence’s ashes in it.  The crematorium supposedly forbade it because it was against some sort of rule.

Later that evening, 2 very tipsy death hags went to Paula’s house.  I think it was empty, but the lights were on and the Christmas lights were twinkling.  More flowers and notes from people that never met Paula were there.  Candles, crayons, candy and a bad illustration of Scooby Doo were there.  Why do people do this?  Like I have any room to talk.  I did take a pic of the house and you can see Paula’s purse collection hanging on a wall. 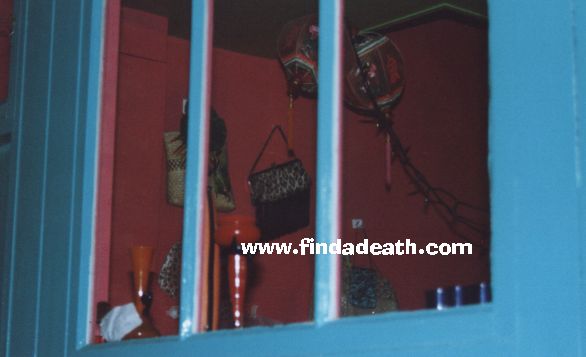 Bob Geldof is still seething at his hated romantic rival, Michael Hutchence. The architect of Live Aid who was dubbed “St. Bob” for his altruistic endeavors, reveals his lingering bitterness toward Hutchence on his new album Sex, Age and Death. Hutchence is the subject of the song “Inside Your Head.” Referring to the bizarre house switch that was part of the divorce settlement between Geldof and Paula Yates in which she and Hutchence moved into Geldof’s house, while Geldof and his girlfriend moved into Hutchence’s smaller house nearby. Geldof sings, “You got the gold, I got the lead/You got the palace, I got the shed/You got a life, you left me for dead.” At one point in the song, Geldof refers to Hutchence’s 1997 suicide by singing, “Why put a noose around your neck?” Another number, “One for Me,” is a love song to Yates. Geldof told the London Daily Mail: “Some things are unsayable, but maybe I can articulate them in music.”

Also, in July of 2001 – a man was trying to sell Paula’s possessions that were chucked in a bin of her seaside home.  He went to the papers trying to sell them for 40,000.  One of the papers, The Mirror, busted him publicly and Paula’s estate is following up with legal action.

You can read about Michael’s death here.

Except for this:  In the news, Police have issued a statement saying that they have found Amphetamine, Cocaine and Angel dust at the flat of Paula Yates, but there is no sign of her other daughter.

This just in, January 2004, from Findadeath friend Sarah,

I *love* your site. As you said, innocently creeeeeepy. I thought you’d like this tidbit on Paula Yates.

After Paula’s death, in fact one day after it, Bob Geldof (Paula’s ex-husband) was awarded temporary  custody of Tiger Lily who was orphaned when Paula  died.  Considering the circumstances of Tiger Lily’s life, I think this is an example of Geldof’s truly compassionate nature.

Then there was a custody battle between Geldof and Michael Hutchence’s half sister, Tina Shoor, who wanted to bring Tiger Lily to her home in Burbank. Apparently Hutchence’s mother was backing Shorr’s petition, but Hutchence’s FATHER very publicly backed
Sir Bob’s! For one thing the entire Hutchence family blamed Paula for Michael’s death, apparently, and for another Bob was already raising his and Paula’s three daughters, so it seemed like the best fit for Tiger Lily, living with her half-sisters (and a nice dig at Paula, giving her kid to her ex-husband). But ah, I am such a cynic. 🙂

And in December 2000, Geldof was awarded permanent custody of Tiger Lily.