That I can’t relate to today’s music or morals doesn’t make either necessarily bad. Just different. I leave the judgments to others.

Big thanks to Kevin Hassell for the vast majority of this story, Cayley for all your hard work getting the photographs, and Gray Reeves for the additional grave picture. Thanks to you guys.

Perry Como was born Pierino Ronald Como in Canonsburg, Pennsylvania, on May 18, 1912. He started out as a barber when he was a teenager, and then became one of the most popular singers of the twentieth century, with a career that spanned six decades. He sold more than 100 million albums, and had fourteen number one singles as well. In addition, he also had a successful television show, and for many years hosted an annual Christmas special. There is plenty of info on him and his career here, at the IMDB. Songs like Catch a Falling Star and It’s Impossible insured his immortality.

On August 12, 1998, his wife of 65 years, Roselle, died two weeks after celebrating their 65th wedding anniversary. After this, Perry’s health declined greatly. They lived in Palm Beach, Florida, in Jupiter Inlet Beach Colony. Perry and his family (he and Roselle had three children) had originally lived in Long Island, but had moved to Florida in the Sixties. They lived in this house 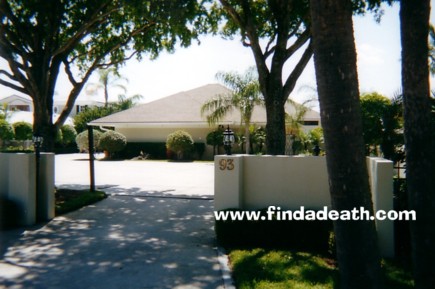 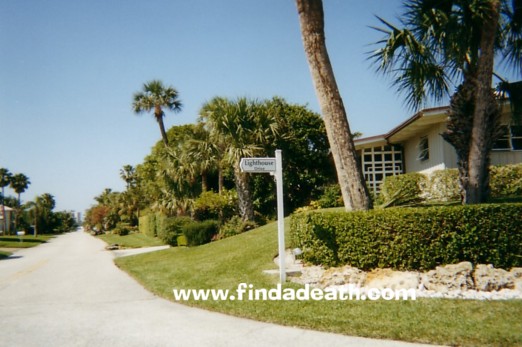 From one account, a year after his wife’s death, Perry really bounced back and was even singing again. He had a steady stream of visitors and fans come to visit him, which he welcomed with open arms.

In October of 2000, Perry checked into the Jupiter Medical Center, complaining of shortness of breath. He was hospitalized for 4 days, but then released. He was however losing weight, but otherwise released in good health.

From what I have read, much of his final years were spent at home, usually in bed. He was suffering from Alzheimer’s disease. As a result, he was forced to give up playing golf, which he loved. Friends said that after having to give that up, it was just a matter of time.

On Friday, May 11th, according to his daughter Terri Thibadeau, she and her son and Perry shared ice cream, and he was in pretty good spirits. On Saturday, May 12, 2001, he died at home, in his sleep. According to Terri, he was sitting in a chair when he passed away, with a caregiver in attendance. He was 88 years old, six days shy of his 89th birthday. 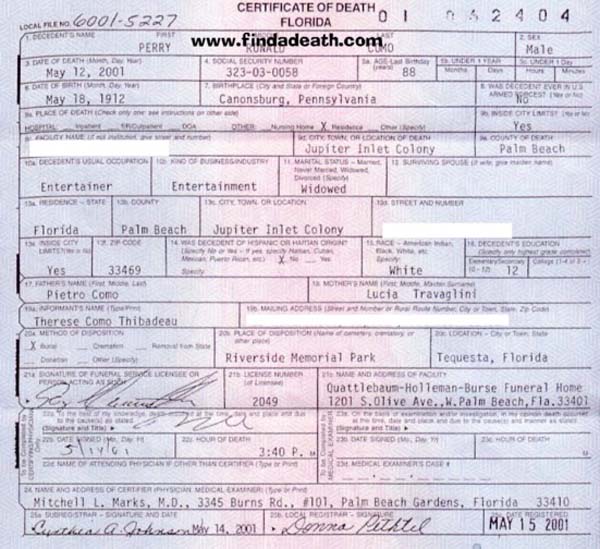 Perry was taken to the  Quattlebaum – Holleman – Burse Funeral Home in Palm Beach. 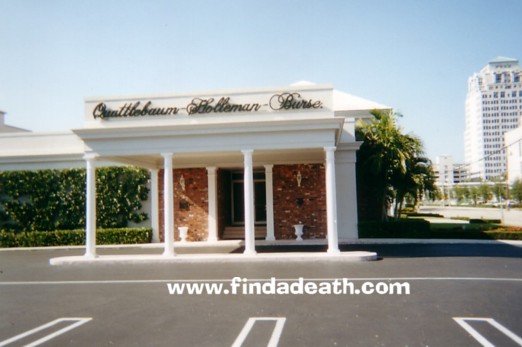 No doubt his casket was taken out these side doors, 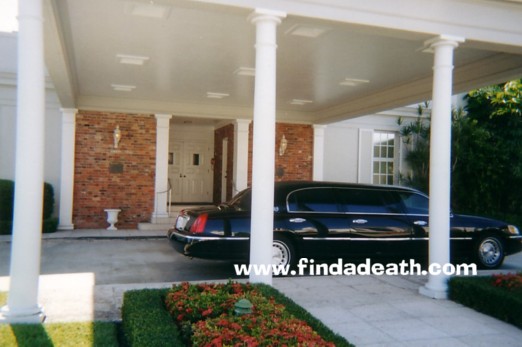 in one of these hearses. 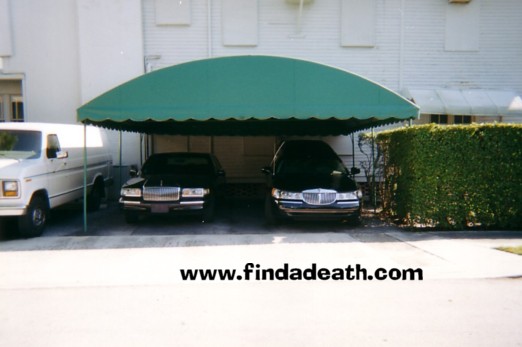 200 mourners gathered for his funeral, held on May 17th, at St. Edward’s Catholic Church in Palm Beach. Two dozen fans gathered outside the church. Reporters were not allowed in.

He was laid to rest in Riverside Memorial Park on the 18th, his birthday. 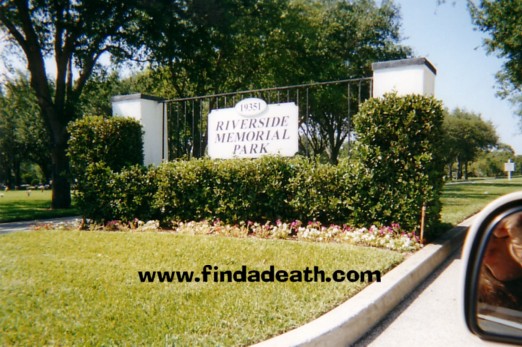 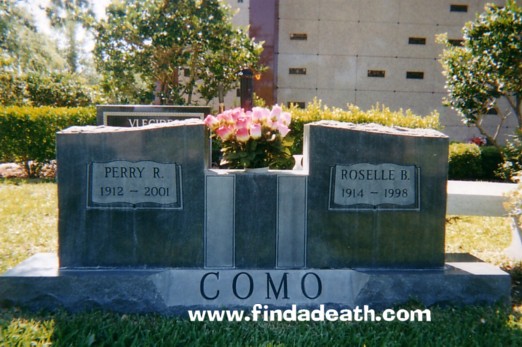 According to one source, Perry’s family was involved in a bitter feud at the end of his life. Terri and her brother were at odds about Perry’s medical care. Perry had signed a living will in 1999 saying that he should be allowed to die a peaceful death, not being kept alive by mechanics. Terri said in court documents that her brother wanted Perry put on a respirator, and a feeding tube. Nu uh. Eventually the siblings agreed to let Perry live his final days as naturally as possible, and he did indeed die with dignity.

Perry’s estate was valued at $50 million, and distributed amongst his three children and 13 grandchildren.

For twelve years he hosted a weekly radio show with a man named Johnny Knox.

Trivia: Perry was one of thirteen children. He was the seventh son of a seventh son.

He and Jackie Gleason had a friendly rivalry for years, because both of their shows aired on Saturday night. They were actually good friends in real life.

Bing Crosby referred to him as the man who invented casual.

He and his wife Roselle were high school sweethearts.

His song from 1970, I Believe, was chosen by Dame Barbara Cartland, to be played at her own funeral in 2000.

He was offered the song Rudolph the Red Nosed Reindeer, but he turned it down. It was also offered to Bing Crosby and Judy Garland, before finally going to Gene Autry.

Perry kept a vintage barber chair in his house, to remind himself of his former career.

Upon hearing of Perry’s death, Vic Damone commented, “When you think of Perry Como, you think of love, beauty, tolerance, patience. He was a very humble man; confident but humble.” 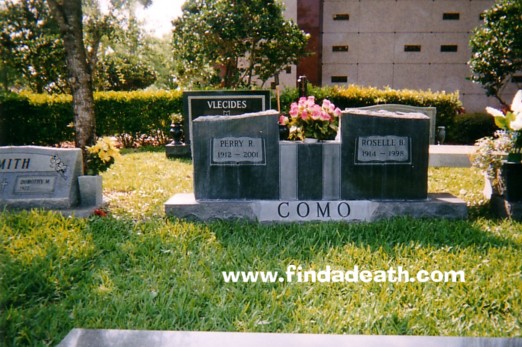