When I was born, the doctor said it was the first full-term miscarriage he’d ever seen.

Diller was born Phyllis Ada Driver in Lima, Ohio on July 17, 1917. She was an only child of middle-aged parents and studied music in college where she met her first husband Sherwood Diller. Though she was famous for her clownish “hag” persona – in her private life she was an elegantly dressed matron who enjoyed martinis, cooking, playing piano and painting. By 1952, the 35 year old Diller was married with 5 children and working as an advertising copywriter. Prodded by her husband to earn cash for laughs, Diller began telling jokes on local Oakland CA radio and TV shows.

She made her official stand-up comedy stage debut on March 7, 1955 at the San Francisco club: The Purple Onion (140 Columbus Ave) where she was an instant hit and appeared for 89 weeks in a row. Her stage character was a true original in the Eisenhower-era: A garishly coiffed housewife who unashamedly hated cooking and cleaning and told everybody about her annoying kids and lazy, unaffectionate hubby “Fang”.

On my honeymoon with Fang, I wore a peek-a-boo nightie. He peeked and booed.

Diller’s career heyday came in the 1960s with countless TV appearances and several film co-starring roles with Bob Hope in Boy, Did I Get A Wrong Number!,  Eight on the Lam, and The Private Navy of Sgt. O’Farrell.  She landed her own sitcom on ABC-TV called The Pruitts of Southampton (1966-67) about a financially ruined widow keeping up appearances amongst her wealthy neighbors. The theme song was “marvy poo” but ratings were not – and the show fizzled after one season. 1967 was also the year Diller did her memorable voice work in the Rankin/Bass animated film Mad Monster Party as The Monster’s Mate.

Diller credited much of her early confidence and success to a motivational book, The Magic of Believing (1948) by Claude M Bristol, which also influenced her buddy Liberace and George Burns.

She wrote four best selling comedy paperback books for Doubleday: Phyllis Diller’s Housekeeping Hints, Phyllis Diller’s Marriage Manual, The Complete Mother, and The Joys of Aging and How To Avoid Them.

“If your children insist on writing their name in the dust on the coffee table, don’t let them write the year.” 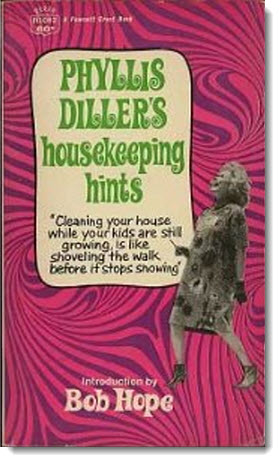 In 1972, the year she played herself on a Scooby Doo cartoon episode, Diller (age 55) added a new element to her comedy act: jokes about her plastic surgery and attempts at beauty. She underwent 15 surgeries in her lifetime.

I had to do something.  I was so wrinkled I could screw my hats on. 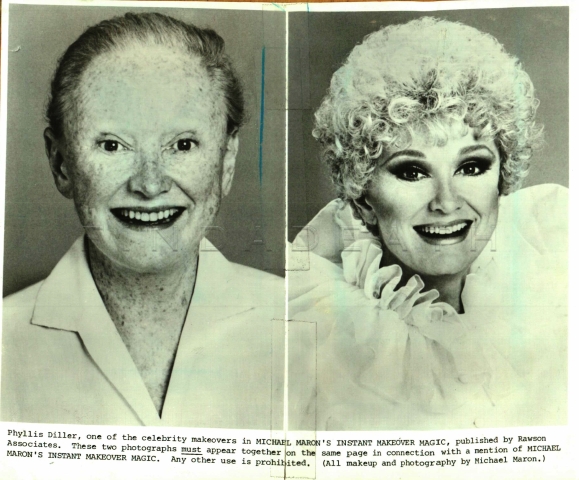 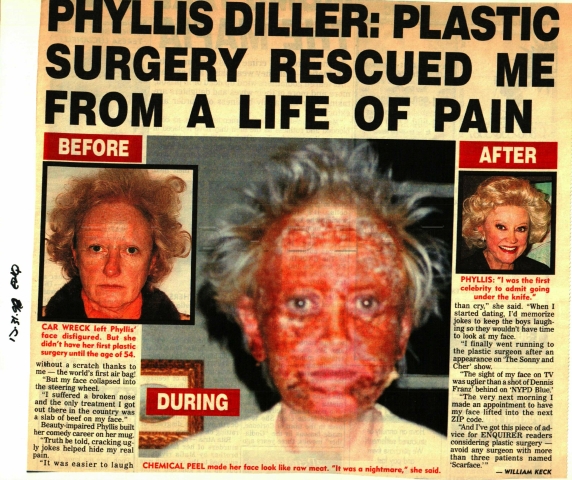 In her personal life, she was married and divorced twice and had a long-time partner named Robert Hastings from 1985 until his death in 1996.

I admit, I have a tremendous sex drive. My boyfriend lives 40 miles away.

Diller continued to appear on TV and tour clubs and theaters around the world into her eighties. A gourmet cook, she avoided hotel food and preferred to cook on a hotplate for herself and staff back in her suite as a way to unwind after a show. For years, she traveled with trunks of cooking supplies until it proved to be a burden under modern airport scrutiny.

In 2003, at age 86, Diller retired from life on the road. Her farewell from the stage was the subject of the documentary Goodnight, We Love You.

I never made Who’s Who, but I’m featured in What’s That?

One of the nice people on my tour told me that Phyllis would occasionally open her home to people interested in purchasing her art.  I got Phyllis’s number from a pal, made the call, and set up the appointment.  Myself and about half a dozen friends were granted a viewing.  We also had to make sure we would put out and buy something.  Cash.

A date was agreed upon in January of 2007.  Phyllis was having a dinner party that evening, but we had about 45 minutes before her guests arrived, to peruse the collection.  We were guaranteed a meet & greet with our purchases.

Last night for dinner I cooked something so bad, the cat covered it.

We rang the bell and were escorted in.  We were pointed to where the paintings were and how they were priced and told to bring the paintings we wanted back to the secretary to pay for them.  Cash only.

We had free reign of one wing.  Paintings were everywhere. 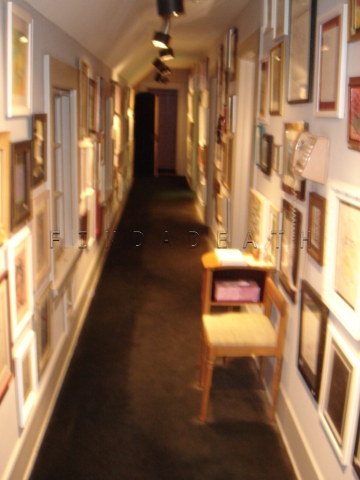 I got nosey and ventured into a room. It was the studio where she made her art.  She made some crazy art. 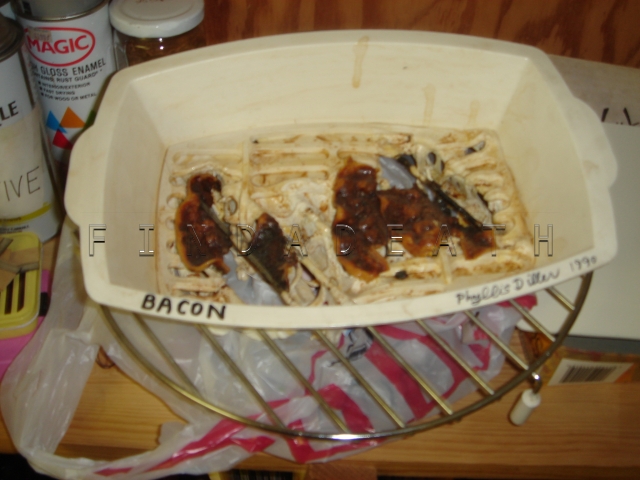 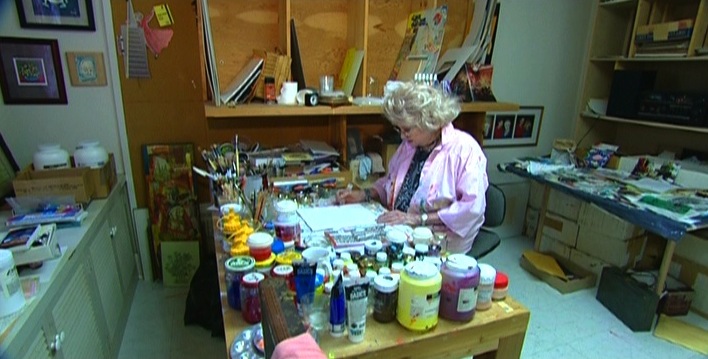 Screen capture from the documentary Goodnight, We Love You. 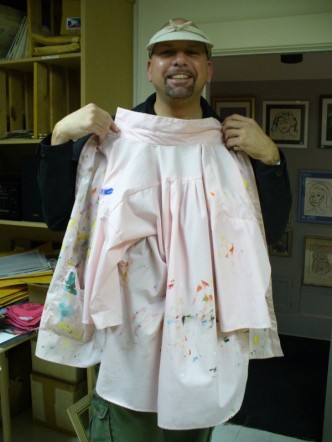 In the corner was a suitcase with this luggage tag.  From this point on, she was known in my home as Phil Dil. 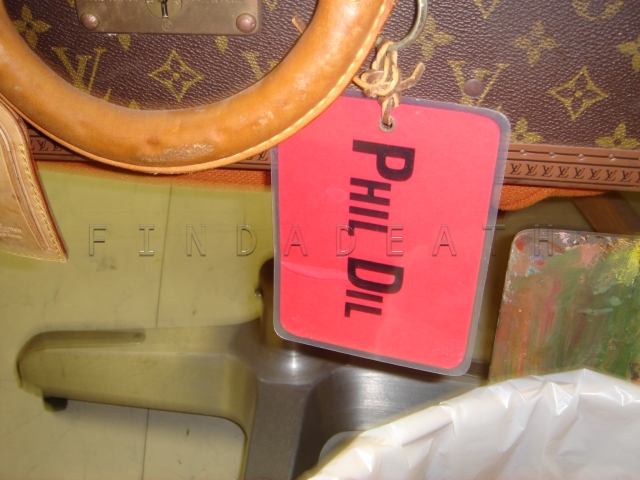 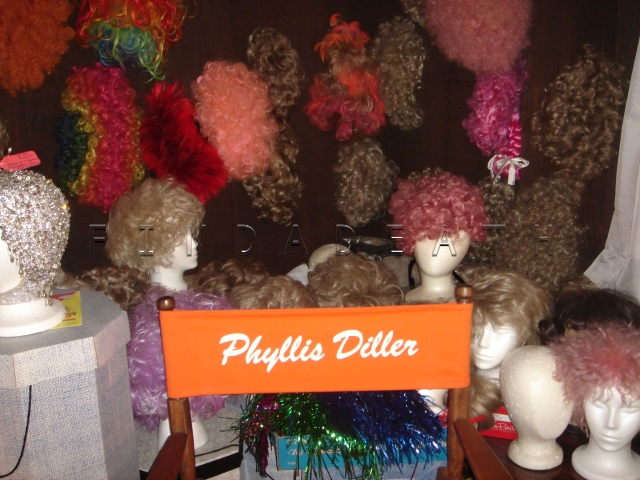 The room was crammed with wardrobe and jewelry.  Everything had a price tag on it.  Everything. 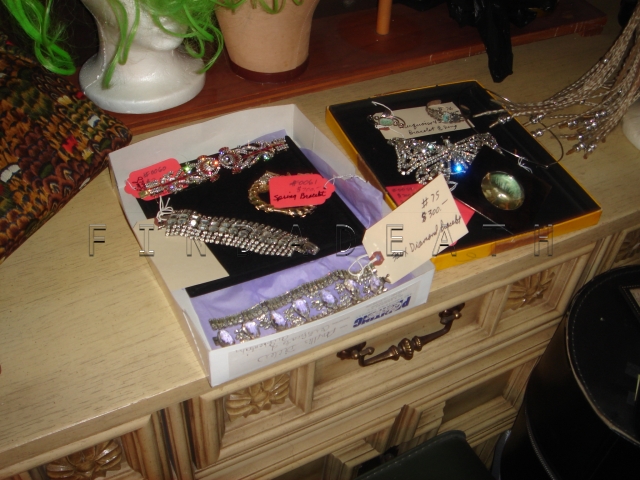 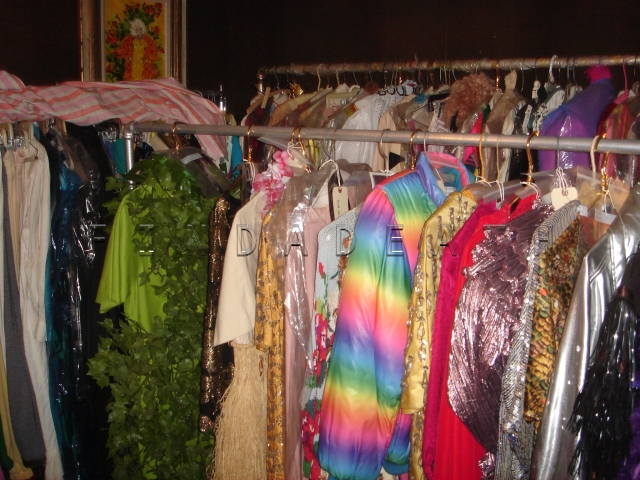 Stole a curler off of a fright wig.  Hell yes.  It was so old the foam part disintegrated, but I still have the pink thingy.  You can see it too, if you come to Dearly Departed Tours. 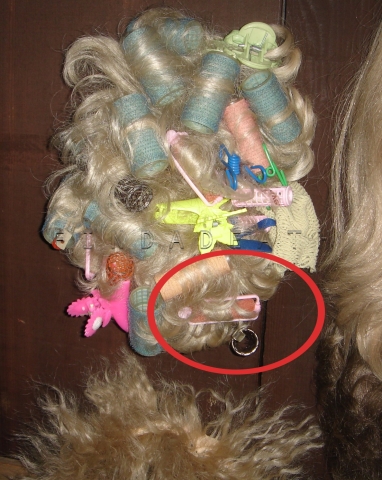 I left something behind.  Hey, I’m not completely selfish. 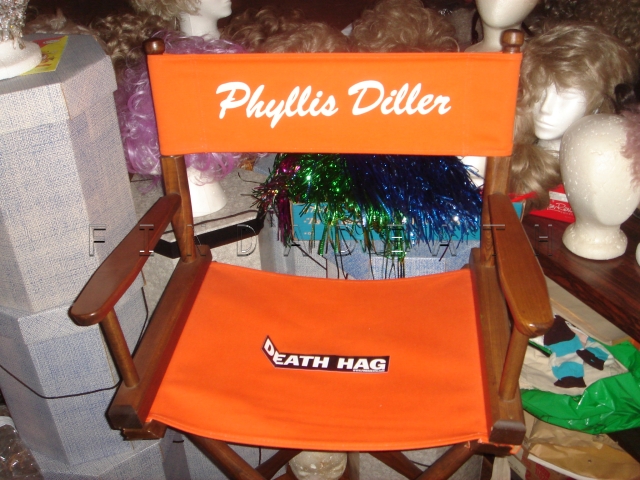 I went further down the hall and found an office with a Dewey Decimal style file case.  I opened a drawer.  Shit.  Every Phil Dil joke was typed and filed on a card.  I picked up one randomly, it was a joke about Bela Abzug.  Seriously, I was dying.  Why I didn’t take one?  I don’t know.  There were THOUSANDS. That’s a huge regret.  I learned later that she donated that cabinet containing over 50,000 jokes, to the Smithsonian’s National Museum of American History.  No doubt they will never see the light of day again. 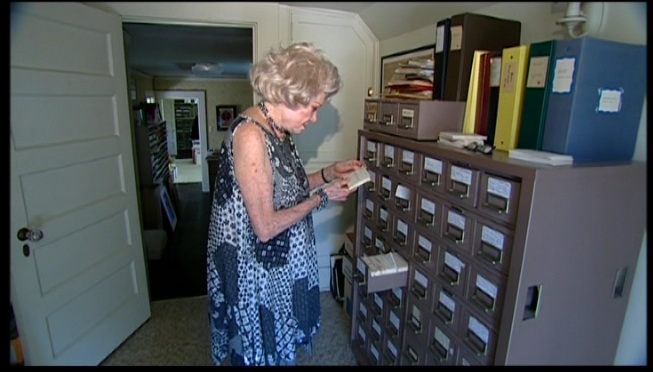 Screen capture taken from the documentary Good Night, We Love You.

The painting I chose was a poem/meditation/prayer that she wrote.  There were some great paintings in the same price range, but I wanted something a little more personal.  I brought it to the secretary, paid for it ($500.  Cash ONLY.) and anxiously waited for Phil Dil to arrive. 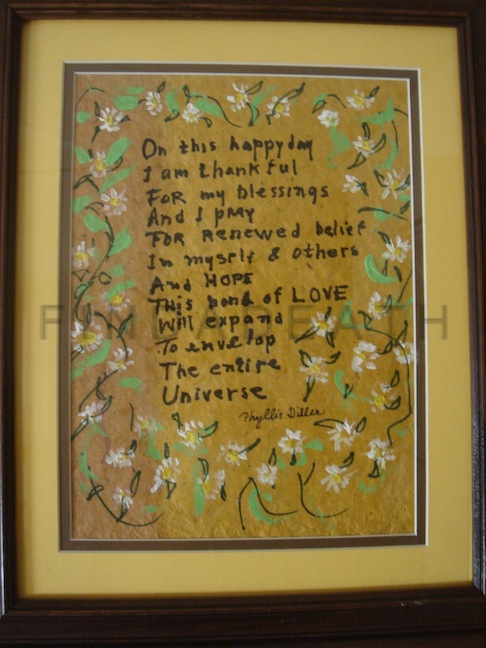 We were given instructions, “Madame will enter the room.  You will not refer to her as Phyllis, but as Madame or Ms. Diller.  Madame will sit with you here (pointing to the sofa) and sign the back of your purchase.  Then Madame will walk to the foyer and pose with each of you in front of this painting.” 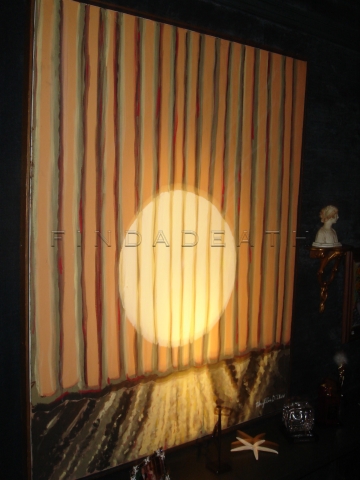 I waited my turn and sat on the sofa.  She had done a Tonight Show appearance just the night before.

Scott:  You rocked on the Tonight Show.

Phil Dil: I what?

Phil Dil: Is that a good thing?

Do you only do your own jokes?

Scott:  You wrote every joke you told?

Scott:  Even the porkchop joke?

Phil Dil:  I wrote that one, I had to tie a pork chop around my neck to get the dog to play with me.

Scott:  That is a classic joke

Phil Dil:  That’s what happens to a good joke.

I asked her to autograph the back of my painting by “signing” her laugh.  She looked at me for a moment, then wrote this. 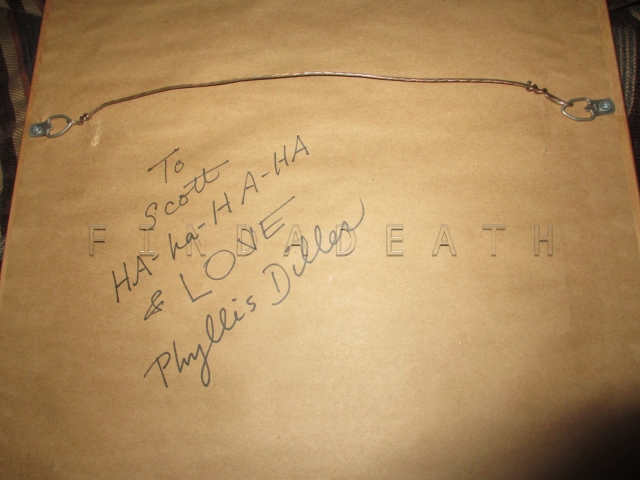 I got up and waited my turn for a photograph.  The secretary approached.

Scott:  May I put my arm around you? 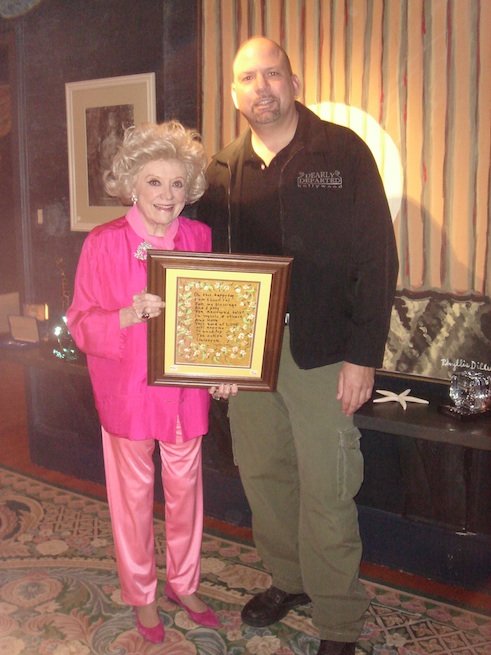 Phyllis was an atheist.  She supposedly posed for Playboy, who nixed the pics because she looked too good.

In 2001 Phil Dil had a crazy thing happen:  She was in a limo, and the driver needed to get directions.  The female driver got out to ask directions, leaving the limo in neutral instead of park.  The limo rolled over and killed the driver.  Phil Dil was still inside when it crashed into a tree.  She was uninjured.

She lost a son to shortly after birth.  Another son died of brain cancer in 1998 and her daughter to a stroke in 2002.  For some reason she became estranged from her other two daughters in 2000.

Phil Dil’s health woes began with a couple of heart attacks in 1999.  She  had a pacemaker installed.  She suffered a near stroke in 2004 which caused her to have slurred speech which was cured with therapy.  In 2005 she had an excruciating fall and cracked her head on a night table and broke her neck.  She fell and had a fractured disk in her back, and a slip-and-fall outside of a Nevada casino that cracked her pelvis.

What hobby do ladies over 80 have?  Falling! 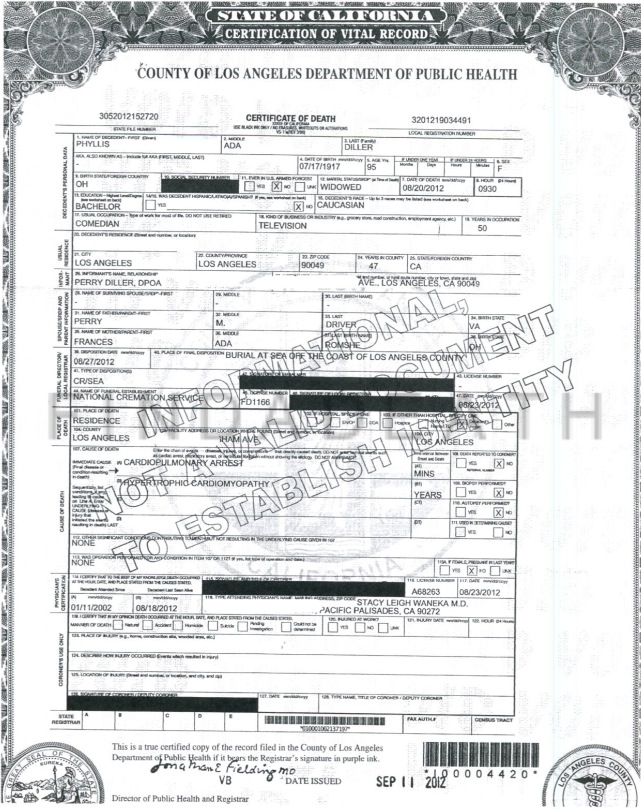 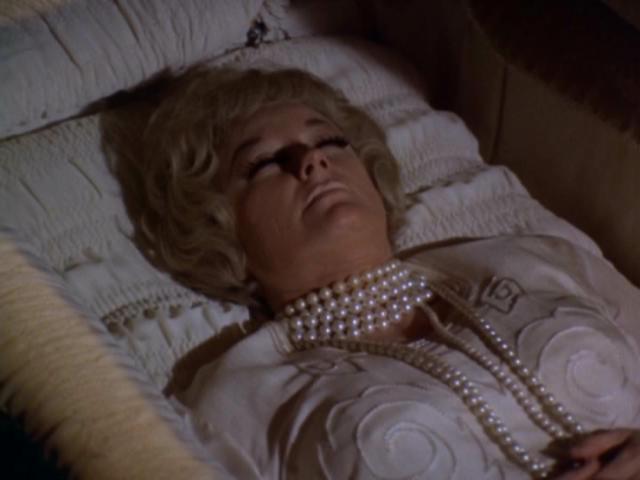 She was cremated and scattered at sea along with the cremains of a predeceased boyfriend Robert Hastings.  Both family’s would hire a yacht and have the ceremony.

At her death, Diller was survived by a son, Perry; a daughter, Suzanne Mills; four grandchildren; and a great-granddaughter.

Despite her many films and status as a comedy icon, she was ignored in the death roster during the February 2013 Oscar telecast. (Idiots) 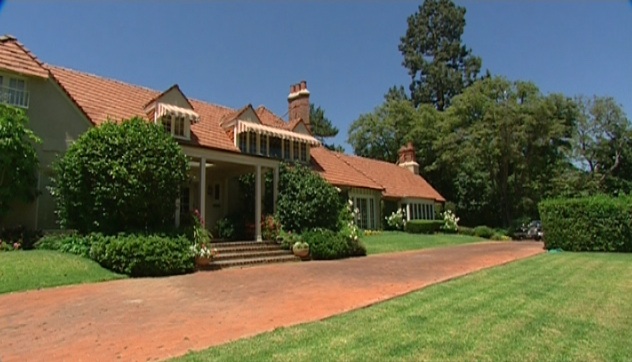 She appeared in 22 of Bob Hope’s annual TV specials.

Constantly carrying a cigarette holder, Phyllis never smoked.  It was strictly a prop. 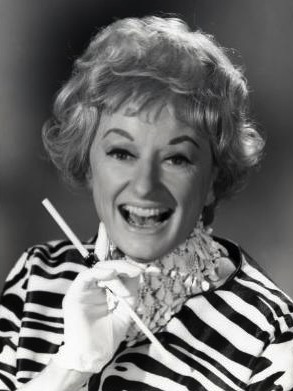 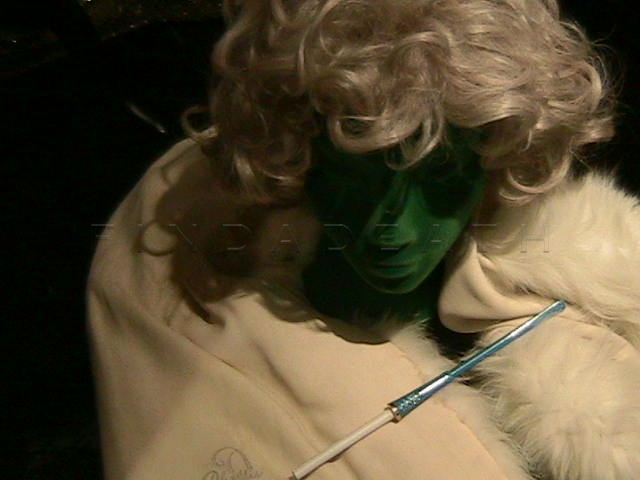 In the mid-1960s, her trademark quirky stage dresses were designed by Gloria Johnson of Omaha, Nebraska.

After she divorced Sherwood Diller in 1965, his mother (“Moby Dick”) and sister (“Captain Bligh”) sued her for defamation of character in an effort to keep her from talking about them in her act. She insisted she was talking about a fictional family, not them, and eventually settled out of court.

Between 1971 and 1981, she performed as a concert piano soloist with over 100 symphony orchestras under the phony name Dame Illya Dillya. 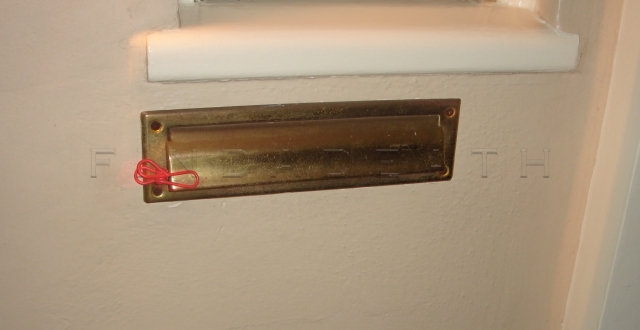