To be a Raelette, you have to “let” Ray.

Ray Charles came into this world as Ray Charles Robinson from Albany, GA, and he left it as Ray Charles Robinson with a huge list of professional accomplishments as well as a string of mistresses, two marriages, nine children (with five different women), twenty grandchildren, and five great grandchildren. He became blind at seven (glaucoma), and by a lot of accounts was a terrific guy, but his womanizing, drinking and drug use were legendary.

Ray had struggled with heroin addiction for two decades. He was arrested three times for drug violations. He quit music for a year to get off it. He claimed to be lucky, because he had the “bread to buy decent junk… and a “high grade of justice.” 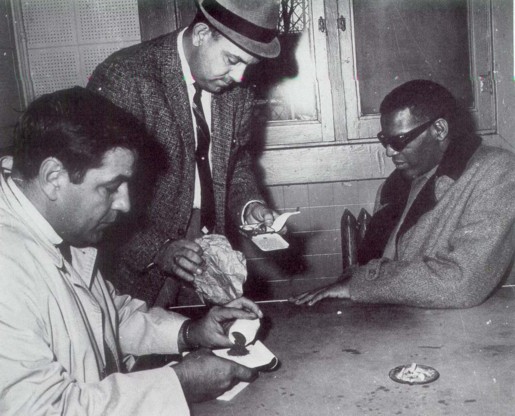 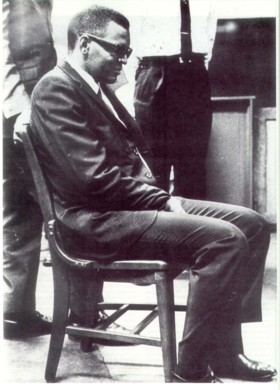 From that point on he went on to make music history, earning twelve Grammy awards in the course of his career. He appeared on television and in movies as well, including a great cameo in The Blues Brothers. Shake a tail feather.

He later appeared in a series of successful commercials for Pepsi, uh huh.

Ray was diagnosed with liver cancer in May of 2003, but publicly it was announced he had hip problems. Even as the illness progressed, Ray still left the Beverly Hills home he shared with his long term girlfriend Norma Pinella 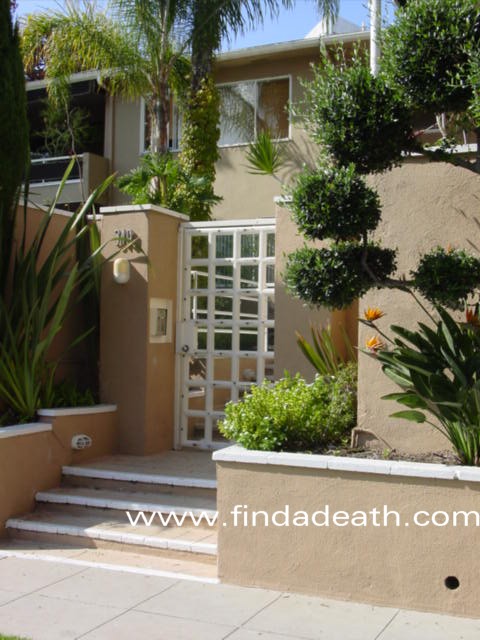 to go to his office. 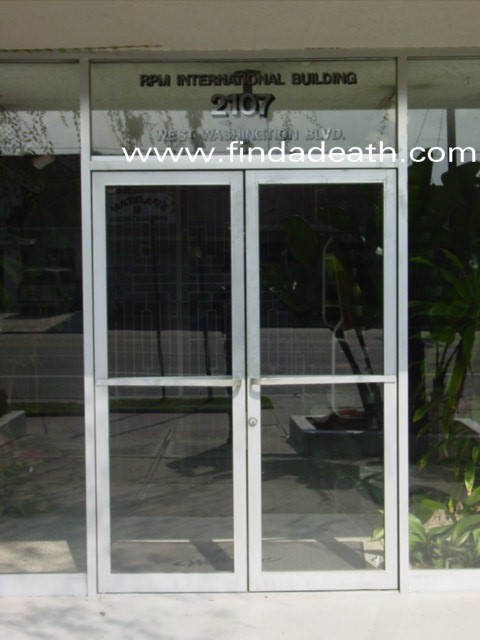 Some reports stated that he left bed at home, to go to bed at the office. By November he was canceling performances for the first time in over fifty years. In March of 2004, his good friend Quincy Jones presented him with the kiss of death, a Lifetime Achievement Award at the NAACP Image Awards. This would be one of his final public appearances. 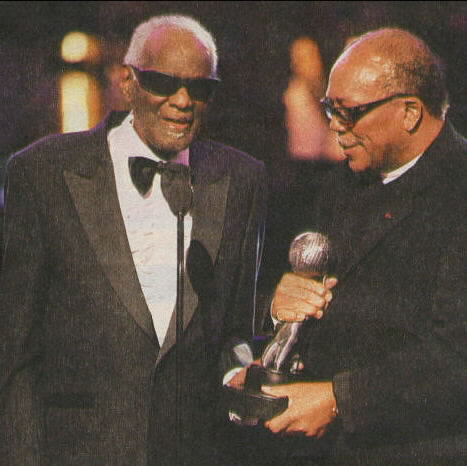 He was also working on a duets album at the time of his death, titled Genius Loves Company, with Norah Jones, Elton John, and others. I saw Elton on a chat show with John McEnroe a while back.  He mentioned that the song he and Ray did together, Sorry Seems to Be the Hardest Word, was the last recording that Ray ever did. I’m fond of Ray, but he is no Kiki Dee.

His studio was declared a Historical Landmark. 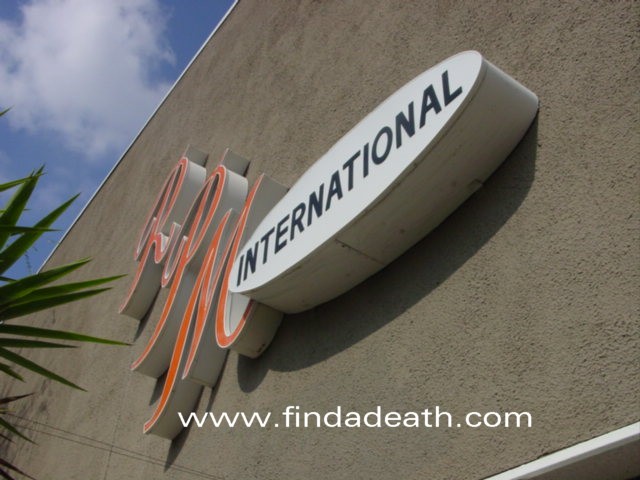 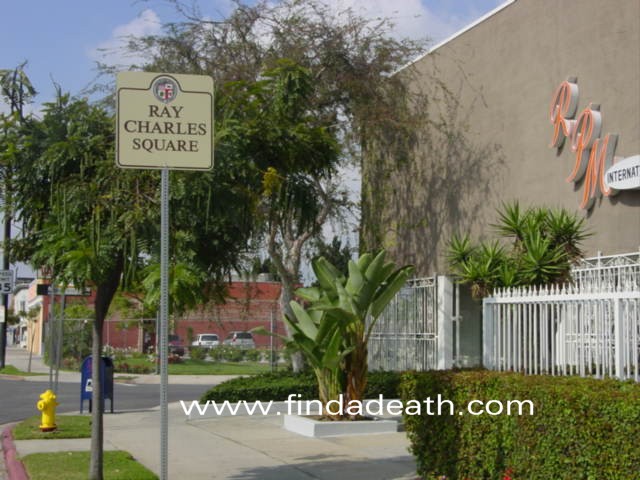 Ray appeared looking frail. This is the plaque erected inside, next to the ever so handy directory. 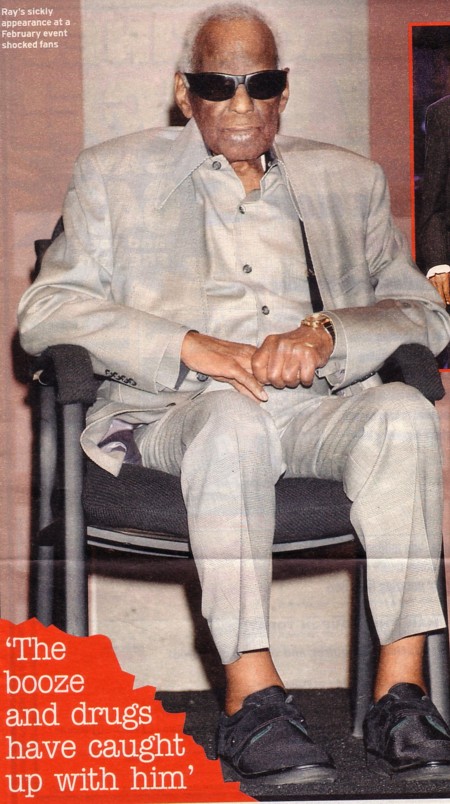 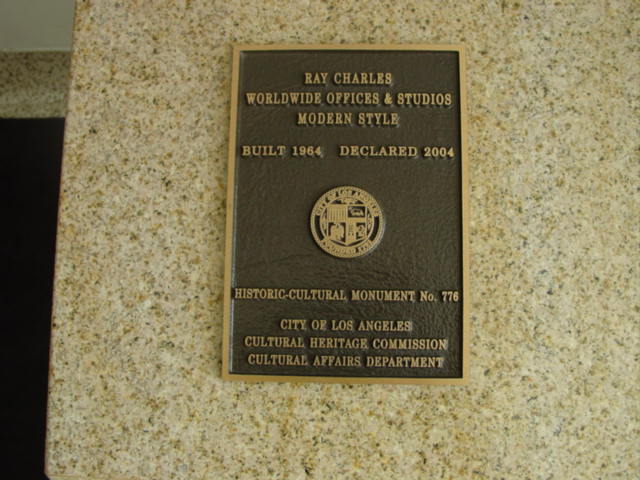 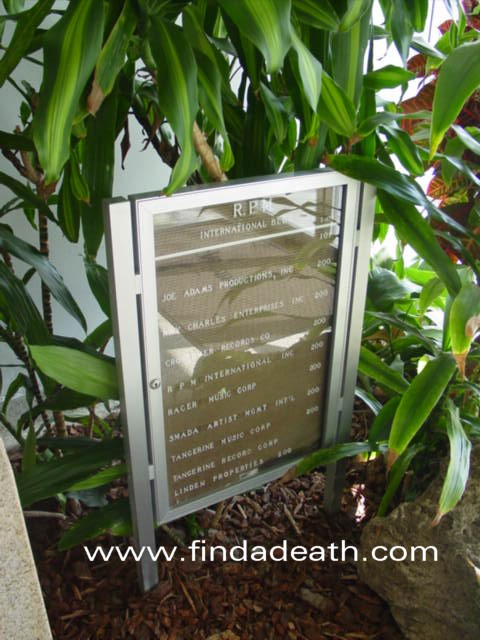 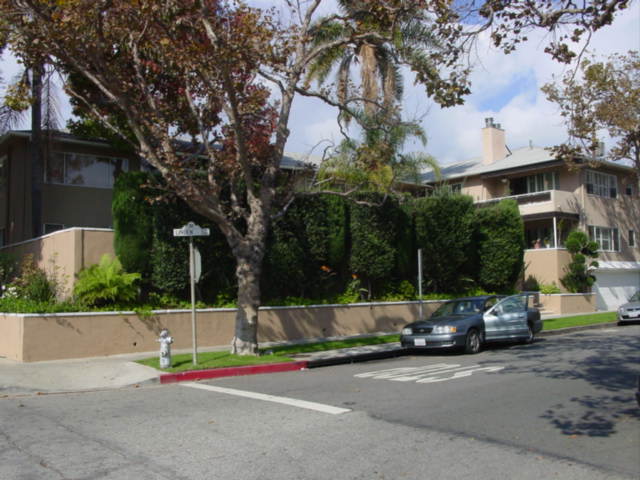 The cause of death was Hepatocellular Carcinoma. Urethra (I’m sorry, it still makes me laugh) Franklin, a close friend and colleague, said in a statement, “He was a fabulous man, full of humor and wit. A giant of an artist, and of course, he introduced the world to secular soul singing. Undoubtedly, the music world will miss his voice. He’s the voice of a lifetime.” 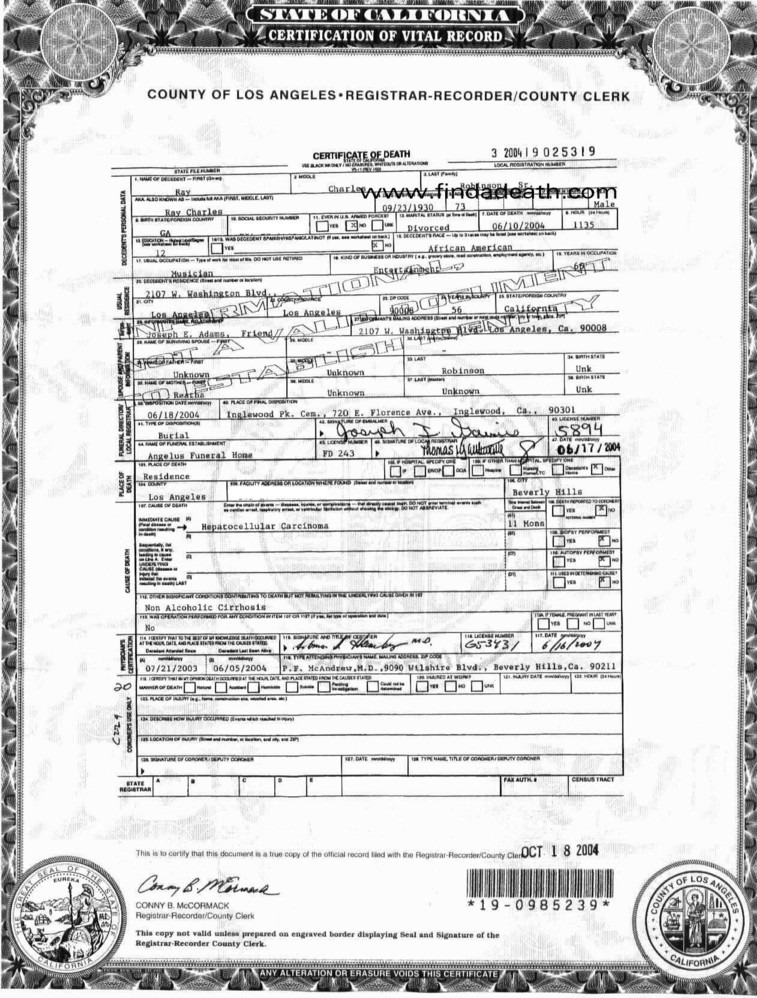 He was embalmed by the Angelus Funeral home, and put on display at the LA Convention Center, where Steve Goldstein from beneathlosangeles.com managed to snap some great pictures for us. 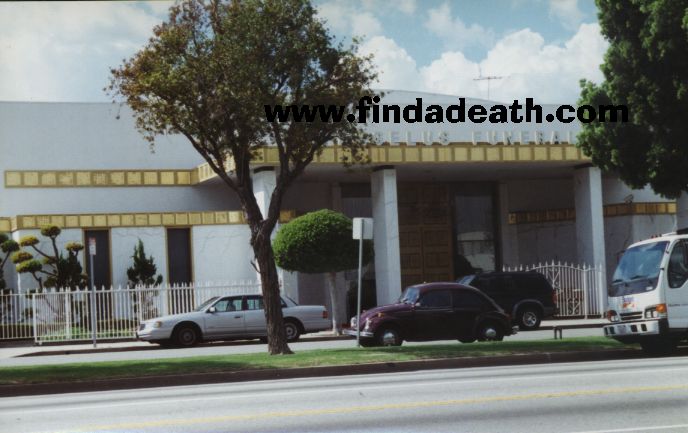 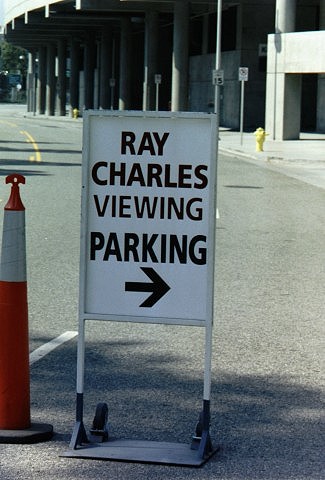 Steve notes that there were loads of media in attendance, and fans filed slowly by Ray in the Box.  The casket was on a raised platform.  Many fans stopped to sign the condolence book or write a message on a huge poster of Brother Ray in performance. 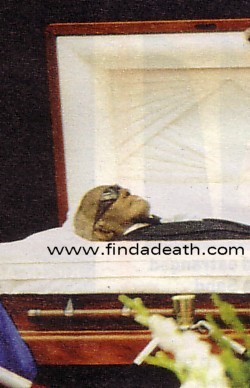 One of the star’s trademark black and silver jackets sat on the empty seat of a piano.

After the service, he was placed in a hearse, and the cortege paused briefly in front of Ray’s studio, where this sign adorned the door. 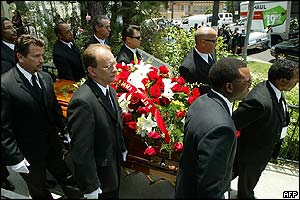 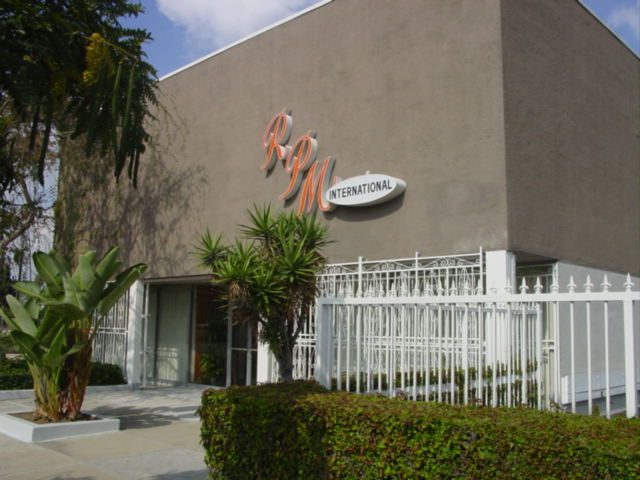 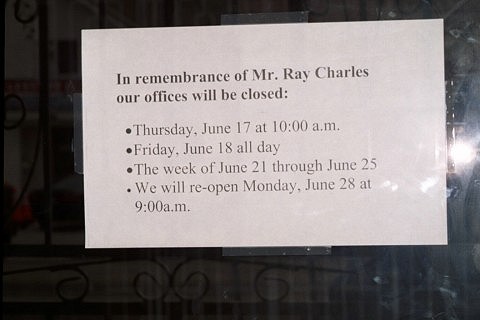 The hearse’s destination was Inglewood Park Cemetery, where he was wheeled one last time to the Sanctuary of Eternal Love. 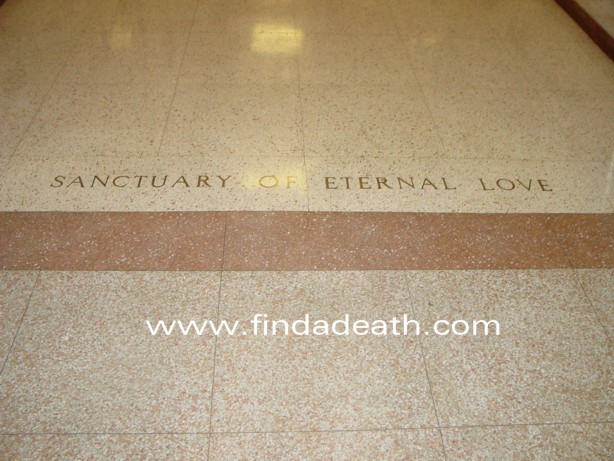 Ray was placed in a wall crypt. I was there a few days later, and a pile of old scrubs still lay there. 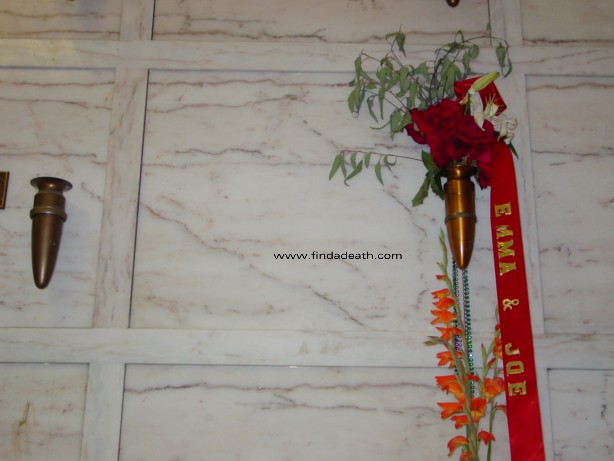 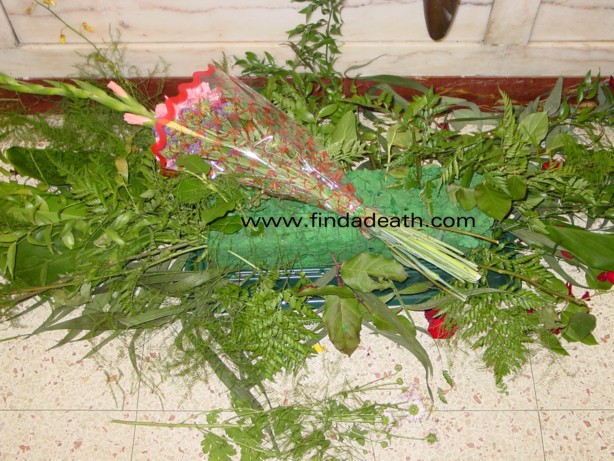 A bit of gossip I heard from Popbitch:  Listen to Ray Charles’ Georgia On My Mind: When Ray turned up to record this he was at the height of his heroin addiction. He arrived late, accompanied by his girlfriend, and went to sit by the piano. Nothing happened. Ray just sat on the stool, rocking back and forth. Then the girlfriend knelt beside him, scratching his legs until she drew blood. This went on for 20 minutes until the blood poured down his leg. Suddenly Ray sat bolt upright, pulled down his trouser leg and started singing, knocking out 20 amazing takes of the song.

Trivia:  Frank Sinatra gave him the nickname of “The Genius of Soul.” It didn’t stick. 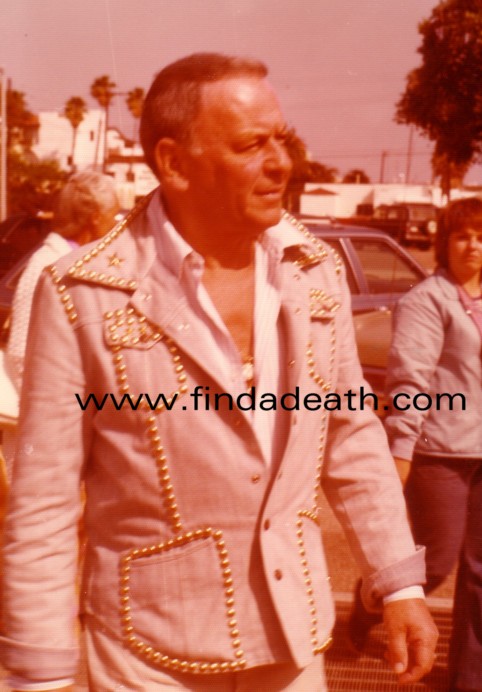 Ray’s brother drowned in front of him in a washtub when he was five. Ray tried to pull him out, but he was too heavy for him to lift.

Ray performed at Reagan’s second inauguration ceremony in 1984.  Ray died 5 days after him.

Ray’s drink of choice was (gag) Bols Gin, in a mug with sugar and coffee.

He was an expert chess player, and played on a board marked with Braille.

Lastly:  As with a lot of people leaving money behind, it gets ugly:

Charles’ Children Being Shut Out?

The soulful, sensational Ray Charles gave us countless classic songs, and Friday night in Los Angeles, a constellation of big names will try to give something back. Mary J. Blige, Elton John, Norah Jones, B.B. King, Usher and Stevie Wonder are just a few in the line up of performers to honor the life of the music master. In fact, thousands will share in the tribute — but 12 very important people will not: Ray Charles’ children.

Family members tell “CJ” that producers of the show refused to involve or even invite Ray’s children. And what’s worse is that three of Ray’s daughters are singers.

Reverend Robert Robinson, a prominent Los Angeles minister and a son of Ray Charles, was the only child permitted to participate in Ray’s public funeral, and now, Robert says being cut out of the concert is heartbreaking.

“We wanted people to know that he had a family, and that he was a family man,” Robinson told us. “Behind the scenes, people try to make it just a business, like he had no other part of his life, but just the business of singing.”

Robinson says the public is getting the wrong idea about Ray’s relationship with his children. ‘He supported my ministry when I was ordained,” Robinson related. ‘All the other kids, he supported us through school — that was a big thing with him. He walked all my sisters down the aisle when they got married. He was just a father.”

The concert is being held to support “Ray,” the new feature film about Ray Charles starring Jamie Foxx, which is set for release September 29th. The family says the icon was thrilled with Foxx’s portrayal of him, and Foxx was equally happy to play the part, insisting, “It was the greatest role in the world; he was the greatest man ever.”

And the kids feel that way as well, which makes the snub hurt all the more.

“That was very hurtful to us, like we didn’t exist,” Robinson said. “You talk about the legacy — we are the legacy.”

The producers of the tribute issued a response, which says, in part: “The idea to celebrate the music of Ray Charles was conceived nearly a year ago with Ray’s input. All of Ray’s children have been invited to attend this special event.” 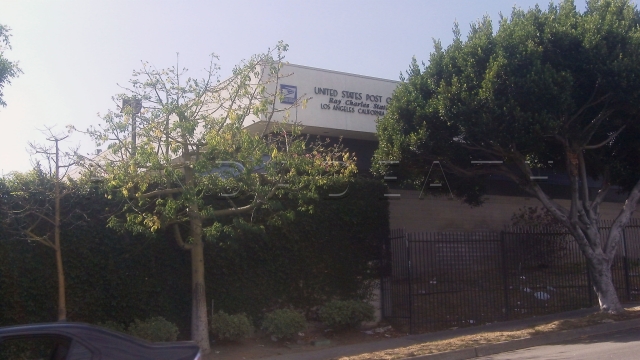 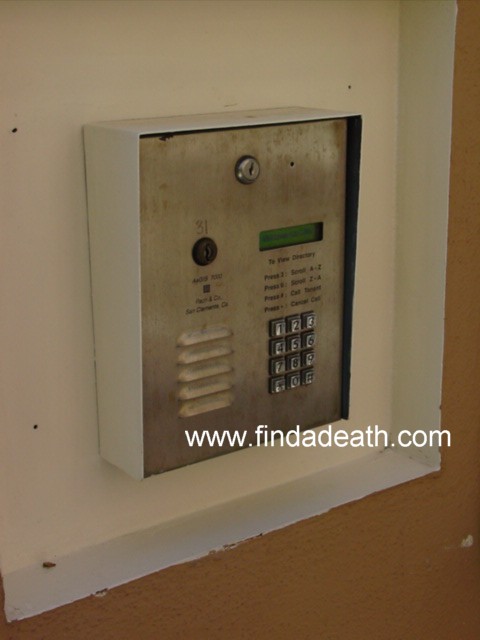 This story was compiled by Kevin Hassell, Steve Goldstein, Michael Hansen, Mike Pare and myself. Pics of Ray’s drug busts came from  “Rock and Roll Babylon” by Gary Herman.

Hope all is well. I just found out from your site that I grew up with two of Ray Charles’s kids. Sean and Cory were in my Boy Scout troop (322 Hollywood CA, now disbanded). I saw a lot of his mother while growing up but nobody ever mentioned the father, after a while Sean (the oldest) dropped out of the troop to live with his father (which the fellas in the troop thought was strange, since he didn’t speak too highly of him), and Corey stayed with his mom. Now I hear his mom is trying to get some money from him, I think that is so tight. Again, hope all is well, and keep on keeping on.

CSPal from Oz Brett Shearer sends this:  I don’t know it you guys had this character over there by Ray Charles was the basis for a McDonalds character called Mac Daddy in the early
80’s.

He wore a suit and had a head shaped like a giant blue moon, with a mouth full of sparkling white teeth. I was about three when they cam out with that, scared the crap out of me.

Just thought you would find it interesting, but Ray Charles did a song with the band INXS with the late Michael Hutchence.

The name of the song is called  Please (You Got That) and it is located on INXS’s album Full Moon, Dirty Hearts.

Ray had twelve children, not nine.  The story about his children not participating in the proceeds of the concert is true.  But then again, they really didn’t need to.  I was told by someone who should absolutely know the truth that Ray gave each of them a million dollars, tax free, when he realized that he was dying.  As for their assertions that he was a great father–well, perhaps not.  But he did give them money–the twelve he acknowledged anyway.

Tom N. Sends us this: According to David Ritz, Ray Charles had wasted away to 87 pounds by the time he died. I thought you would want to know.

Rick sends us this:

The song “Uhh-huh” was actually written by Prince, and given to Ray as a “spiritual song” (the right one being GOD). When Pepsi approached Ray for a song to use in their new campaign, he gave them “Uhh-huh,” but insisted Prince be paid for it (most hardcore Prince fans are aware of this story).
Prince actually received a good chunk of change for his “GOD-song”  to be used in a commercial!