I was such an ugly kid – When I played in the sandbox, the cat kept covering me up.

Findadeath.com friend Nathan clued me in that Rodney bit it today.  I loved Caddyshack.  I love that flick. 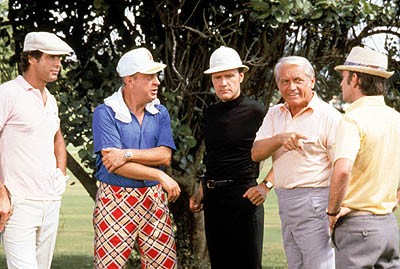 Rodney’s weirdest was probably in Natural Born Killers.  You can read about his other roles here.

Rodney has been teetering on the brink for a while now. This awful picture of him with a hole in his head, disturbed me deeply.  In March of 1994 he was hospitalized for a lung infection and stomach pains. 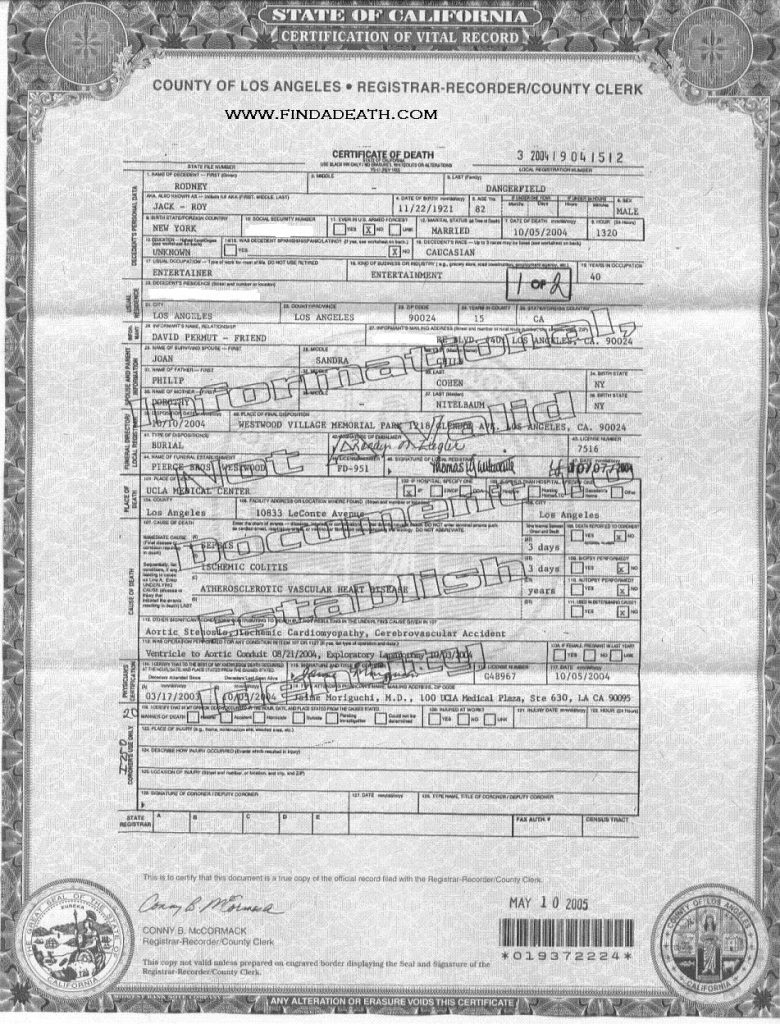 Findadeath friends Casey and James both pointed out this:  It’s worth noting that on Rodney Dangerfield’s website (Tuesday, October 5) Rodney’s “Joke of the Day” was this:  “I tell ya, I get no respect from anyone. I bought a cemetery plot. The guy said, “There goes the neighborhood!”

I’m not going to lie to you, I totally thought his wife is a money grubbing tart.  What sealed it, were the photographs of Rodney in recent years, looking completely OUT of it, 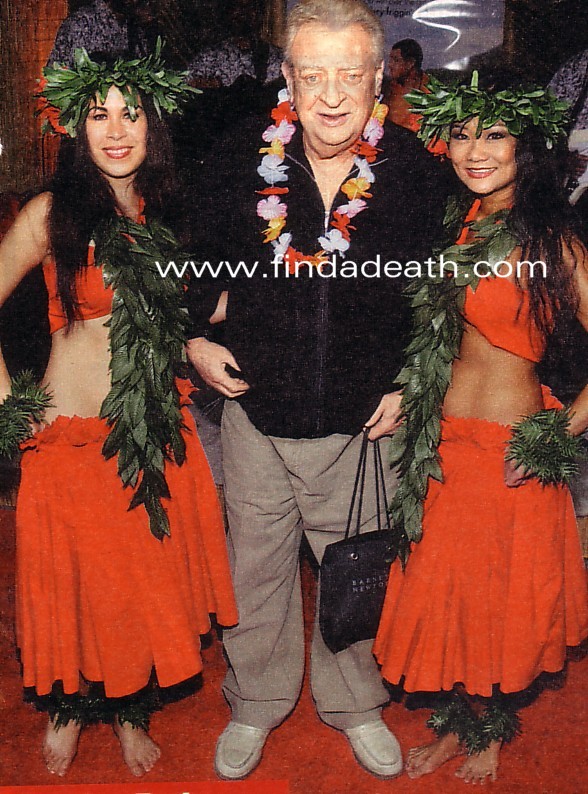 and her young ass all smiling and chirpy. 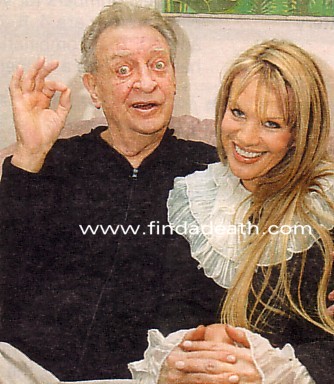 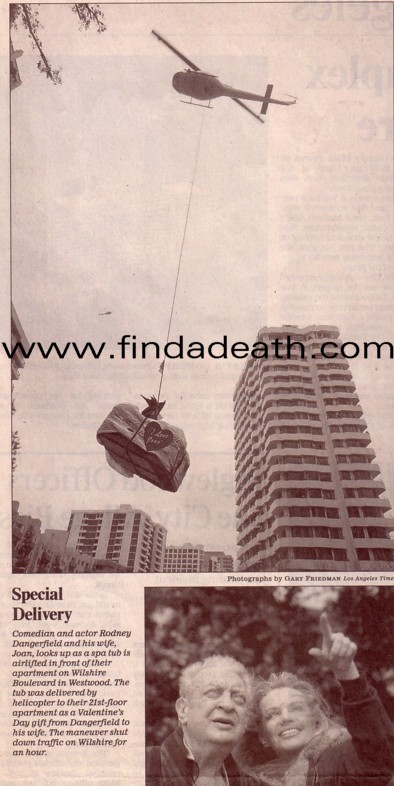 However, the next account of his funeral, made me rethink it.  Mind you, I didn’t change my opinion, I just rethought it.

The funeral was held at Westwood Memorial Park, where the most uptight women in the world are employed. I was there the day before, and the setup was huge. The tents were put up, with chandeliers inside them. Findadeath.com friend Matt Andrews sends us this: Dangerfield’s widow, Joan, created a candle-lit heaven’s harvest where chandeliers dripped from rose-encrusted trees and white cashmere carpeting covered the grounds leading to the chapel. An angelic harpist strummed at the chapel entry where attendees strolled through ornate iron gates boasting Rodney’s initials shaped in sterling silver roses. Joan tried to create heaven on earth by covering the chapel grounds with canopied clouds of softly-lit chiffon which swept twenty feet into the sky while an abundance of fragrant candles and flowers hugged the pathways. The services were held at dusk in keeping with Rodney’s daily request to Joan that she never book appointments for him before 5pm. He was a night person, laid to rest just after sunset.

Findadeath.com friend David crashed the funeral, and liberated a program for our perusal:  It’s a clever thing, wrapped in a red tie, 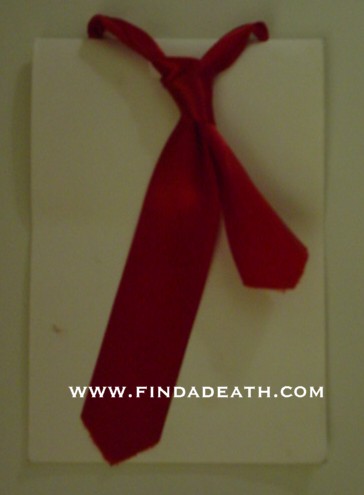 and within has the cast or characters listed. 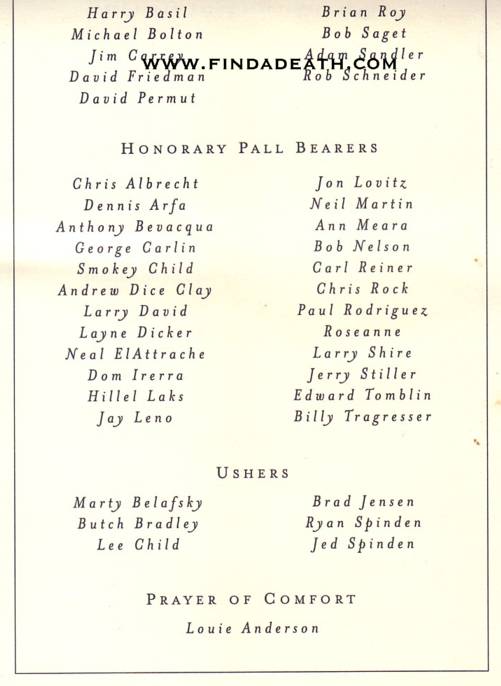 Very cool, and thank you David.

Master of Ceremonies Bob Saget commandeered a heartfelt and impressive service of eulogists including Rodney’s daughter Melanie Roy Friedman, his nieces Morgan and SueAnn Reese, Jay Leno (who called Rodney “the greatest stand-up comedian of all time”), Roseanne, Paul Rodriguez, Tim Allen, Jerry Stiller and Anne Meara, Michael Bolton (too choked up to sing a planned song, but did speak), Dom Irrerra, and Jim Carrey (who said, “I’ll never forget how kind he was to my father. I remember watching Rodney on The Ed Sullivan Show as a child, and laughing, not because I got the jokes, but because my father was in hysterics!”). The common thread of the poignant eulogies emphasized how kind Rodney was to his fellow man, and the generosity he showed friends and fellow comedians.

Highlighting the service was a special Rodney Dangerfield Memorial Video, produced by longtime friend, producer David Permut, that treated guests to a visual soundtrack of some of the most memorable moments in Rodney’s life that brought the crowd of 500 to tears. Rodney’s widow selected Frank Sinatra’s “Come Fly With Me” as the recessional song because it was playing in Rodney’s hospital room when he passed away.

Strolling violinists accompanied the Pall Bearers as they led the casket to the gravesite outside the chapel. The Honorary Pall Bearers and family followed behind. A final Prayer Of Comfort was recited by comic friend Louie Anderson at the behest of Rodney’s widow. After the prayer, guests were led to an elaborate feast of Rodney’s favorite dishes presented by caterer Along Came Mary, where family, friends, and fellow comics embraced and reminisced about their friend and how much he truly gave to the world.

Glowing comments from guests abounded, including Academy Award-winning producer Al Ruddy who said, “It couldn’t have been a better funeral if I had produced it. It was tasteful and special and the overall feeling was of happiness.” American Comedy Awards creator and producer George Schlatter said, “What a spectacular send-off for Rodney. Joan succeeded in truly creating heaven on earth for Rodney. She thought of everything.”

Stunning floral bouquets flooded the chapel and grounds from well-wishers unable to attend such as Larry King, Jack Nicholson, Whoopi Goldberg, Rita Rudner, John Travolta, Chris Matthews, Cindy Williams, Byron Allen and others. Shaquille O’Neal sent a seven-foot tree in his place. Grr.  Though Dangerfield often joked about his terrible doctor, Dr. Vinny Boombatz, his favorite real-life doctors that looked after him through the years were in attendance, including Drs. Hillel Laks, Neil Martin, Jamie Moriguchi, Neal ElAttrache, and Nick Diaco. Immediately following the services, Rodney’s immediate family, including his wife and children from a previous marriage, Melanie and Brian, gathered at his Star on Hollywood Boulevard’s Walk of Fame and adorned it with armloads of flowers.

A few days after, I returned to the cemetery, and found loads of flowers still there.  More interestingly, were roses, still in a box, still addressed to his wife.  Bet you can’t guess where that label is now.

There is another comic called Kat Newman that sells purses made of old shit.  Here’s a pic of Rodney and Kat, with her shitty purses.

LOS ANGELES (Reuters) – Rodney Dangerfield, the google-eyed comic famed for his self-deprecating one-liners and signature phrase “I can’t get no respect,” died on Tuesday at age 82, his publicist said.

Dangerfield, who became a pop culture sensation with a string of broad film comedies starting with Caddyshack in 1980, died at 1:20 p.m. PDT (4:20 p.m. EDT) at the UCLA Medical Center, where he had undergone heart valve replacement surgery in August, spokesman Kevin Sasaki said in a statement.

Findadeath.com friend Torgo sends us this:  Don’t you find it ironic seeing how Rodney was a fan of marijuana, (according to his Howard Stern interview) that he just happened to have died at 4:20?

Rodney lived in a high rise on Wilshire Boulevard, same building that Tori Spelling lives in.

On Sunset Boulevard, the tributes are proudly posted in the marquees of the Comedy Store, 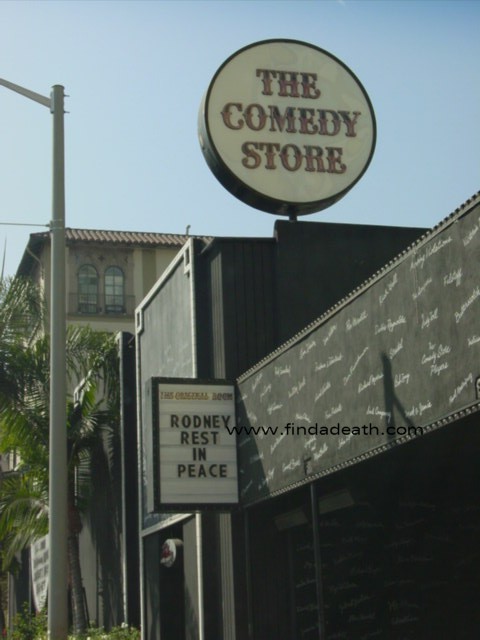 and the Laugh Factory. 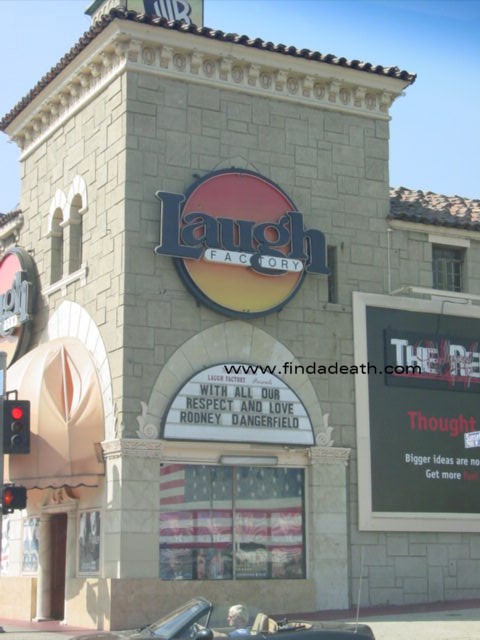 In 1995, the Academy of Motion Picture Arts and Sciences rejected Dangerfield’s application for membership. A letter from Roddy McDowall of the actors branch explained that the comedian had

failed to execute “enough of the kinds of roles that allow a performer to demonstrate the mastery of his craft.”  Roddy McDowall was a dick.

The ultimate rejection, and Dangerfield played it to the hilt. He had established his personal Web site (“I went out and bought an Apple Computer; it had a worm in it”), and his fans used it to express their indignation. The public reaction prompted the academy to reverse itself and offer membership. Dangerfield declined.

“They don’t even apologize or nothing,” he said. “They give no respect at all – pardon the pun – to comedy.”

This is his official website, with no official announcement as of 5:23pm October 5.

This just in, December 2004, from Findadeath friend Paul:

About 20 years ago, I was visiting the Chicago area and was given some tickets to see Rodney at the Drury Lane Theater in Oakbrook, an affluent suburb about 20 miles outside of Chicago. We sat through Rodney’s show, which was predictable but funny. Now, at the end of the show he offered to answer questions from the audience.

After answering 2 or 3 questions, he called on an attractive lady who was maybe 35 or so, and she asked if she could have his tie. The significance of this, I have no idea. Anyway, he invites her up on stage, and as she approaches him he takes her hand, then grabs her by the crotch, turns her upside down with her dress going toward the floor, and vigorously rubs her most private area for

what seemed like longer but was at least a half a minute or so. The woman was absolutely hysterical, her husband (or date) had to be physically restrained, and when she was released, ran off the stage, sans tie to add insult to injury.

Scott, this story is true on my father’s grave.  Use it and edit it any way you want if you care to. If not, enjoy a chuckle and hit delete.  Keep up the great work, ya know I love ya.

Thanks for the info, Paul! Regarding the significance of his giving away his ties, he always did it at the end of his act, as you saw, usually to a “lucky lady.”  The ties sold for $75. autographed, on his website.

EVEN in death, Rodney Dangerfield gets no respect. The late comedy legend’s longtime publicist, Kevin Sasaki, got a call from a booker at CNN last week asking him if “Rodney would be available to share his comments on the passing and legacy of Johnny Carson.” Sasaki replied that unless CNN had a new way of linking up to the afterlife via satellite, that would be impossible. Dangerfield, of course, passed away last October. Ironically, his new DVD set, “Rodney Dangerfield – The Ultimate No Respect Collection,” was posthumously released last month, and includes clips culled from his more than 70 appearances on “The Tonight Show.”

Mark Langlois sends this, in May 2009:  I was watching Rodney Dangerfield’s last interview with Stern on Howard TV recently. Rodney had such a sad childhood. He was born out of wedlock — his mother neglected him terribly – he said he never got a hug or kiss. He had to fend for himself by age 8 to make money to eat.

His daily breakfast was orange-aid soda, a donut and coffee at the local diner. He also got paid 5 cents by a local molester if he sat on the perv’s lap and got kissed. Rodney acquiesced.

Rodney said his mother was a real bitter angry woman – and when he eventually got married, his mom would only silently glare at his wife.

Howard Stern asked if Rodney believed in an afterlife. Rodney said he was a “logical” atheist- and added: “We’re apes — do apes go anyplace?”