I lost my friend this week.  This is my tribute.

I first came into contact with Sadie when I began researching the book I co-wrote, Rocky Horror from Concept to Cult.  During our interview, I had no idea that we would become close friends. 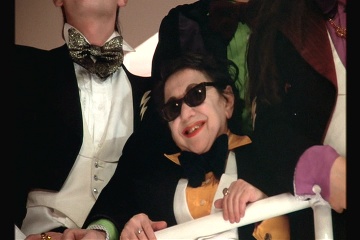 Of course there were the Rocky Horror stories, and she always entertained me with great anecdotes about her life and career, both on the stage and in film.  You can read her obituary here.

Sadie with Hugh Cecil and Pam Obermeyer on the set of Rocky Horror. 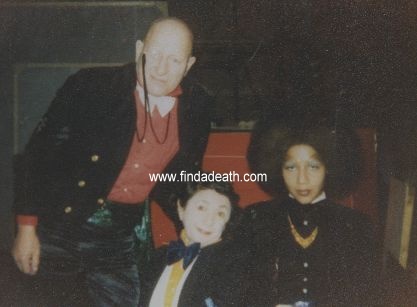 Sadie always made an impression.  Almost everyone she met had something nice to say about her… unless you crossed her.  She had no patience for people like that, and would not tolerate rudeness or stupidity.  She was completely self sufficient, even traveling  – by herself – to Los Angeles to visit me.  A woman in her mid 80’s traveling around the world – by herself.  Up until her stroke, she was planning another trip to LA.  We should all have such good fortune.

Professionally, Sadie often played a puppeteer in films.  Little people often did.  She was in The Dark Crystal, she played an Ewok in Return of the Jedi, and a Munchkin in Return to Oz. 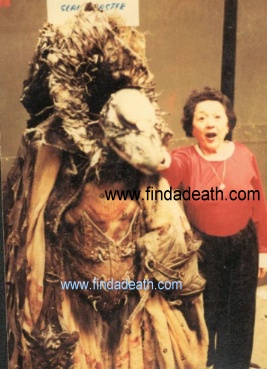 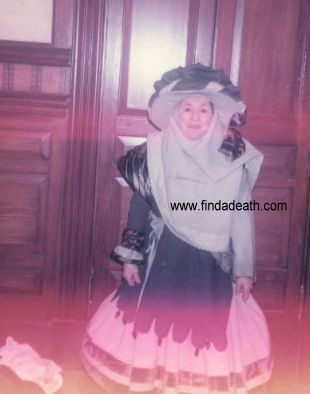 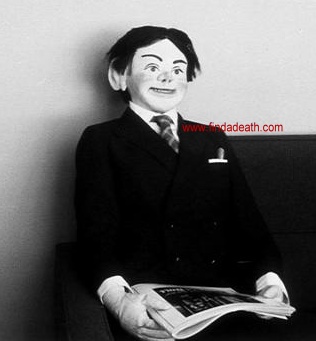 She lived for decades in a little flat just off Russell Square.  Since she was in this flat for so many decades, she collected lots of things.  To those on the outside her place would seem cluttered, but she almost always knew where everything was.  Almost. 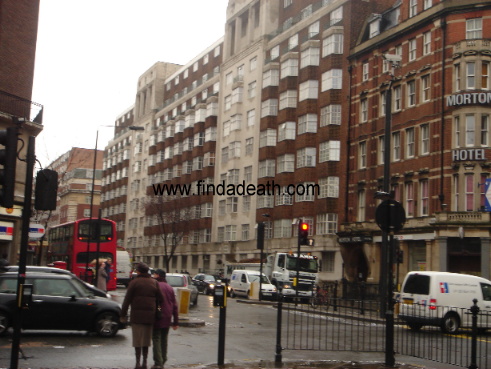 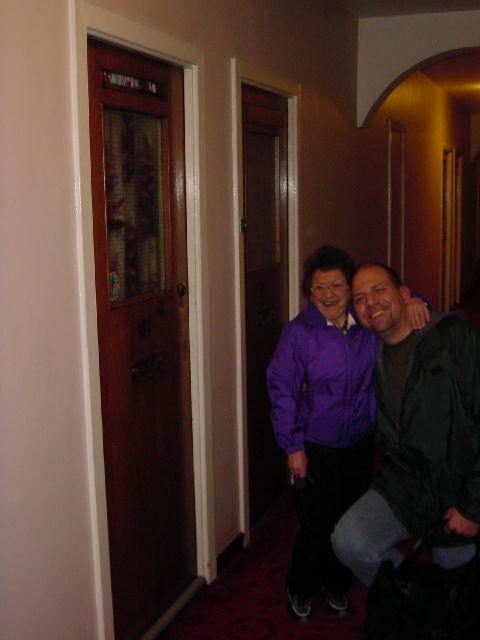 Sadie, being 4 foot 1 and me being 6 foot 2, well, you can imagine what getting around her little flat was like.  Every time I turned around I’d bang my head on her lampshade, or knock something over, and she would burst into laughter.  Sadie surrounded herself with photographs of loved ones. A favorite of hers was this photograph with Princess Anne. 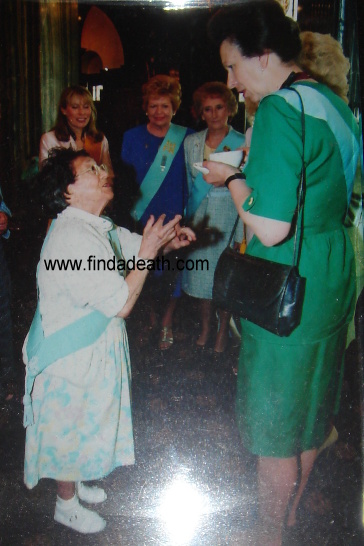 Sadie loved the Royal Family, and was proud to be British.

Our height difference always attracted attention – which she (and I) thought was a hoot. 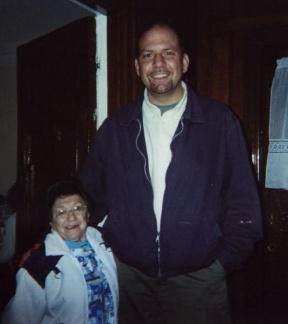 She collected stuffed tigers, and named them all.  Seriously.  She had skads.  She had a ritual:  every May and September she would change the theme of her little home from blue (drapes, lampshade, bows on each animal) to red. 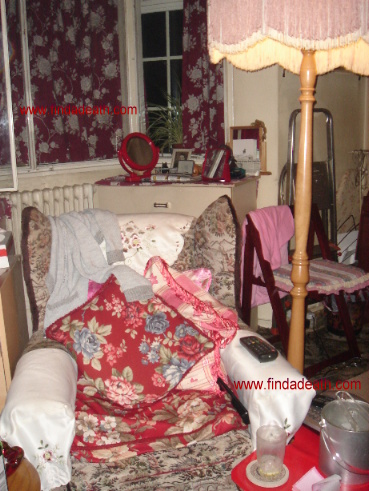 Another ritual I abhorred, was the laborious task of washing her windows.  I cannot tell you how much I hated this chore.  Hated hated hated hated it.  I’d think it was done and she would point out spots I missed. 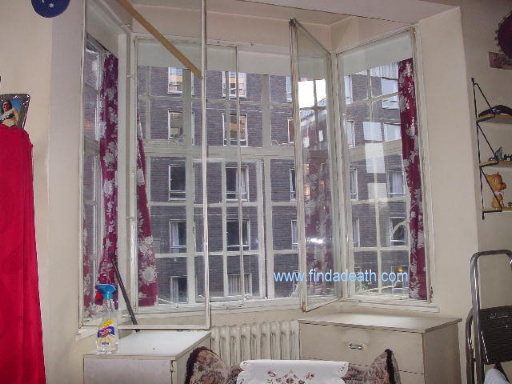 My fat ass hanging outside over the road, cursing the entire time.  She would usually giggle, which just pissed me off more.  She always rewarded me with a home cooked meal.  Either shepherds pie or spaghetti “bolog”.

I would do those windows every day of my life for another afternoon with Sadie, and I’d do it with a smile.

Sadie became an important source of comfort and support when (I thought) I was going through the worst time in my life.  She always managed to make me smile and lend a sympathetic ear.  She put up with a lot.

Sadie had a tiny stuffed dog from her childhood named Pickles.  It was something to keep pajamas in.  She cherished it and it was important to her that it find a good home when she died.  Sadie decided not to risk waiting.  She sent Pickles to me in Los Angeles for safe keeping.  We spoke fairly often, so when I mentioned that Pickles safely arrived, she became upset.  She told me she cried when she packed Pickles to send him over.  So the next time I visited, I brought Pickles home.  Sadie was elated.  Pickles is now in safe hands. 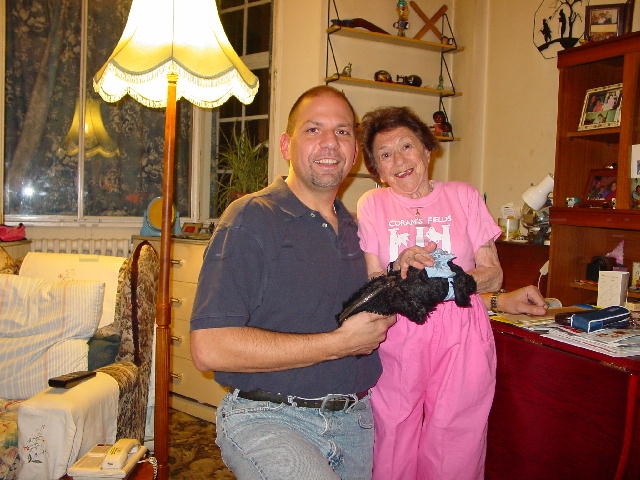 Sadie was the perfect hostess, always having a hand towel in the bathroom for each guest visiting.  Sadie also loved cooking.  Adored cooking.  She would plan out meals days in advance, do the shopping day ahead of time, and endlessly describe them in detail.  If she was shopping and noticed the price had increased on any of her usual purchases, she would shout, “It’s diabolical!!!”  Here’s Sadie’s recipe for Bubble and Squeak. 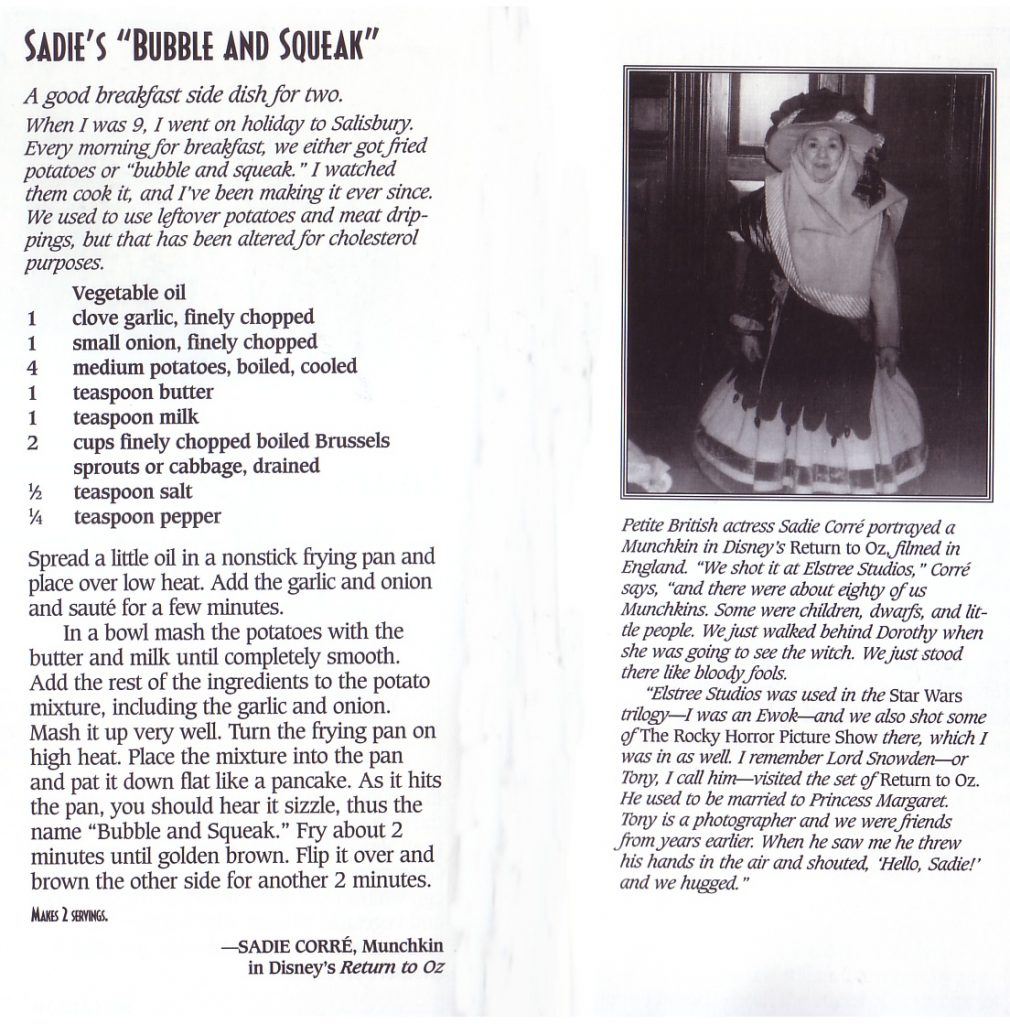 Sadie was a proud member of the Grand Order of the Lady Ratlings, a group of show business veterans.  I’d often go to Ratling events with her, especially the installation ceremonies for a new Queen.

She loved Coronation Street, hated Eastenders (“That’s NOT the East End I know!”)

Sadie became friends with my family, and I with hers.  Several times I drove Sadie down to her sister Alma’s house, to play cards or board games with her and her husband Chas. Sadie couldn’t easily visit on public transportation.  When Alma passed away, I realized how fortunate I was to have the means to bring Sadie to her sister’s home.  They wouldn’t have seen each other otherwise.

When my own sister Lauren came to visit, Sadie always looked forward to spending time together.  We would usually ending up in Sadie’s flat till 2 am, hammered, banging around in her wayyyy too small – for us- apartment, laughing a lot.  Sadie also bonded with my young niece – who is also a performer.  My niece was self conscious about her height.  Now how often would having a 4 foot 1 friend with a lifetime of show business experience come in so perfectly handy? : )  Sadie, my sister, and my mom became pen pals, and Sadie loved writing letters usually starting with, “A wee note from a wee lady”.

The last time I visited Sadie before her illness, she was still her old self.  We had a rip roaring night.  She didn’t feel like cooking so I brought ready meals for the microwave.  Up in her flat, me with my Bacardi, Sadie with her gin and tonics – we just sat and talked about anything, like no time had passed.  I know Sadie had good friends and family, but I like to think that my friendship with her was more special – like no one else’s.  We all probably feel that way about certain friends.  There was no subject we didn’t discuss, absolutely nothing was off limits.  I made a video message with Sadie for my sister that night, which you’ll see in a minute.

Shortly after my visit in 2007 Sadie suffered a stroke.  She was put in a nursing facility in St. John’s Wood.  I visited her during her illness.  It was upsetting.  Sadie said to me once, very specifically, that she was scared to death of ending up in a nursing home.  She’d seen it happen to too many of her friends, and she found it sad and undignified.

It was unfortunate the way things turned out. 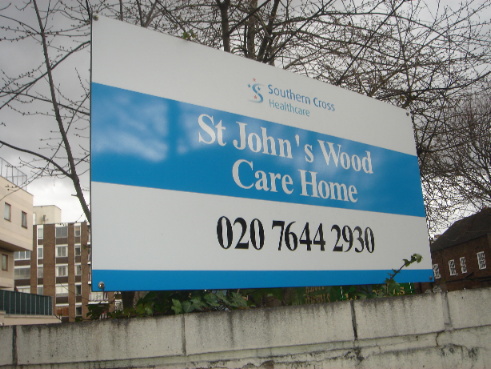 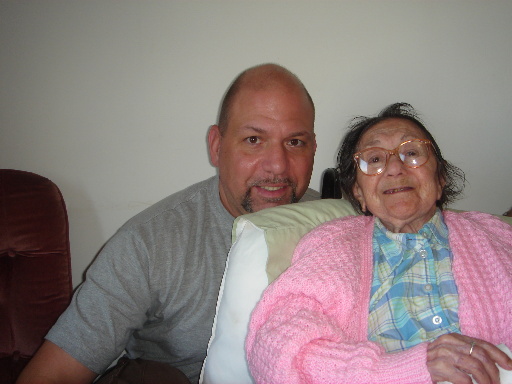 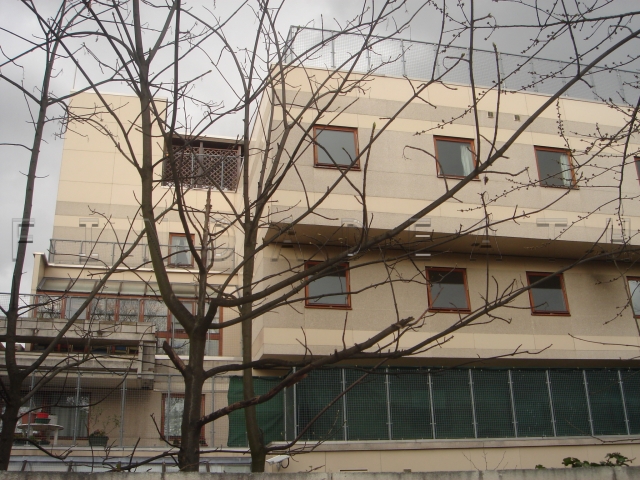 Sadie donated her body to science.

The Lady Ratlings had their own event for Sadie – and from what I understand, it was great fun.  Sadie would have loved the attention – and these wonderful ladies all doing The Time Warp – how terrific. 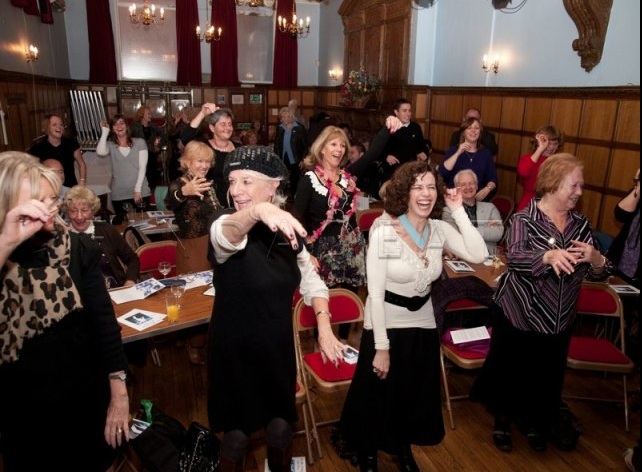 Sadie’s remains were finally released.  I guess science was finished with her.  A brief memorial service was held at Golders Green Crematorium. 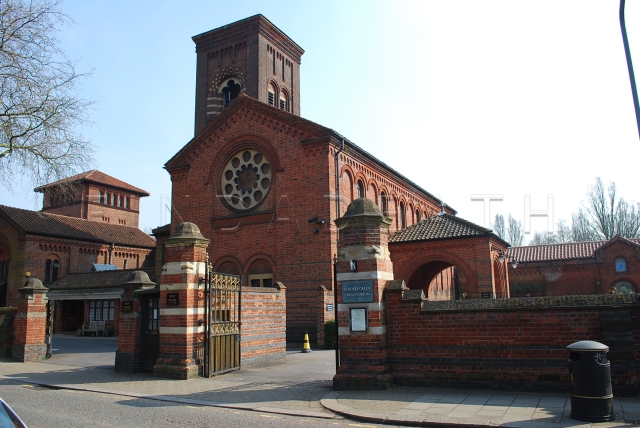 She was placed in a wicker coffin on the table to the left in the photograph below.  My Way by Sinatra, There’s No Business Like Show Business, and The Time Warp were played. 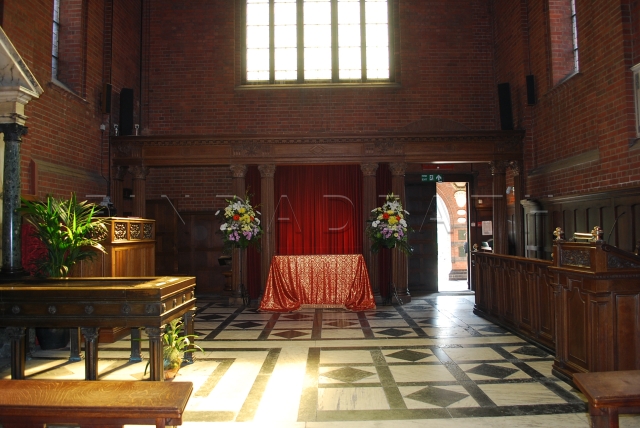 Sadie was cremated.  I was finally able to pay my respects in March 2011.  I marked Sadie’s spot with an orange bouquet.  I wish I could have found blue carnations – for some reason she loved those. 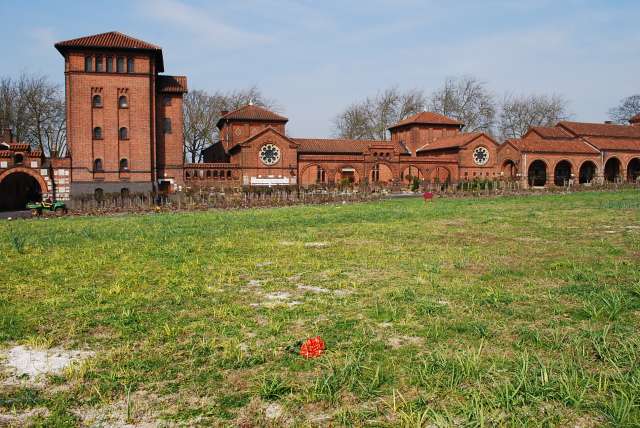 The next time you get angry about something, or at someone – instead of staying pissed off, grab a soda, a beer, a gin and tonic – and have a toast with Sadie and me.  A lot of you know, when you lose someone close to you it gives you perspective.  You realize that most of the things that get you down,  just. don’t. matter.

Rest in Peace little Sadie.  I’ll miss you.  My world is less sparkly now that you’re gone.
I can’t wait to see you on the other side. 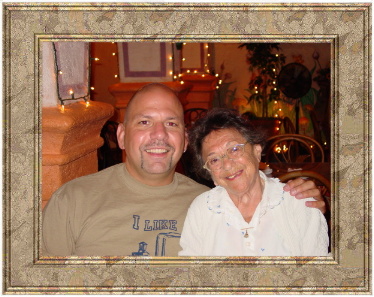 For those interested in making a charitable donation in Sadie’s memory, she requested them to be made to
The Grand Order of Lady Ratlings.

Trivia:  Sadie was in the film Chitty Chitty Bang Bang.  I took her to see the play in London which was sorta art imitates life imitates… 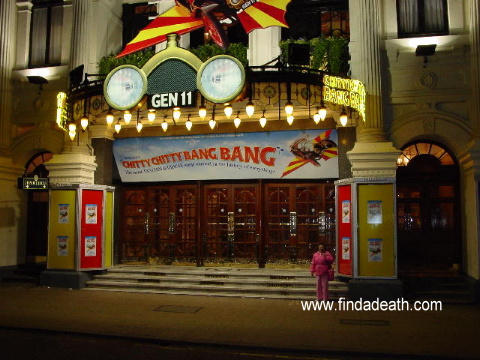 Sadie’s costume from The Rocky Horror Picture Show is on display in the Dearly Departed Gallery. 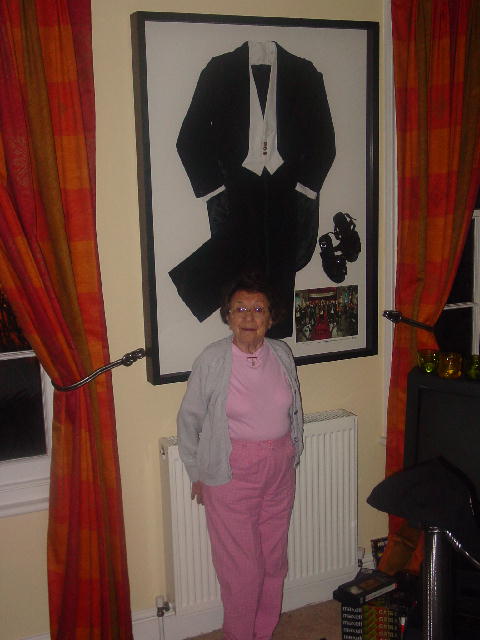