It occurred to me that there wouldn’t be world hunger, if you people would MOVE WHERE THE FOOD IS!!!

Sam Kinison was one loud, funny man. Sure, at times he offended me, but you know what I did? I ignored it, because mostly he made me laugh. He was abrasive for sure, but damn funny.
Thanks to my pals at Celebrity Collectables for getting the autopsy report and death certificate to us.

On April 10, 1992, Sam was on his way to Laughlin, Nevada, to perform at a sold out concert.  He had been married just the week before to a 20 year old woman called Malika.  They honeymooned in Hawaii.  It was a Friday night when Sam was to perform in Laughlin, and they drove there from Los Angeles.  They traveled East on the 40 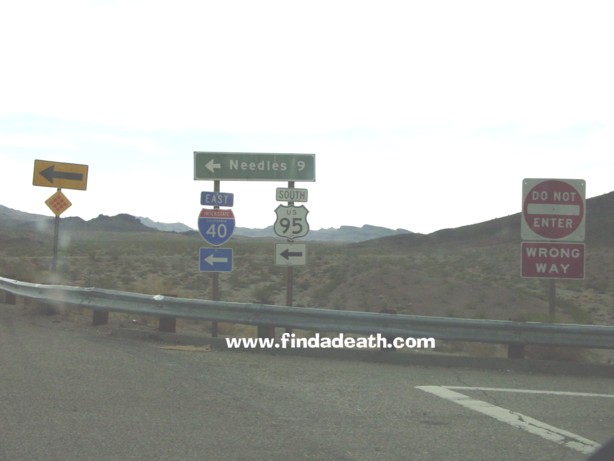 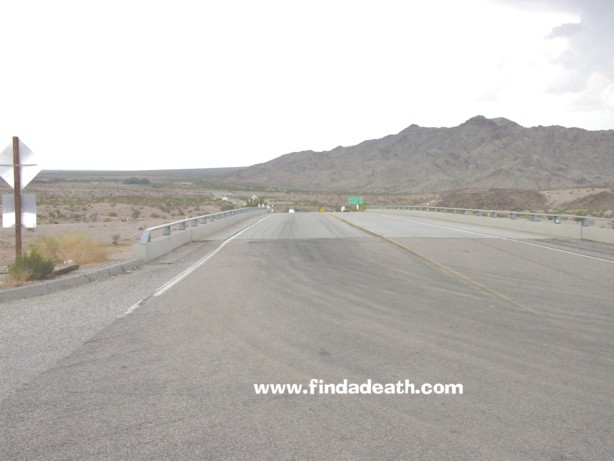 when the route went North.

There are conflicting reports as to where exactly the accident happened.  One report says 3 miles north of the interchange, 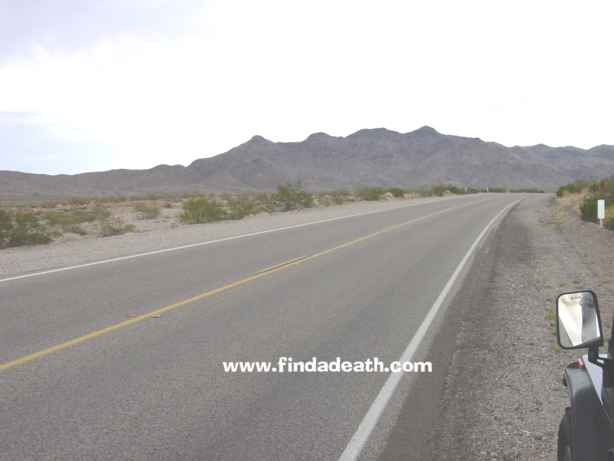 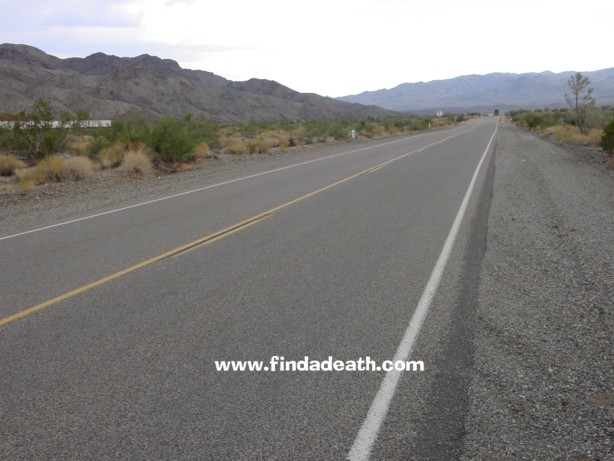 Sam was sober.  He hadn’t had a drink or done drugs in months, and it was a big issue for him.  It was about 8:30 p.m. when they were on their way to the show, and apparently Sam saw the pickup truck coming from the other direction. 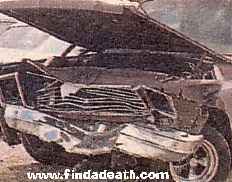 Sam had slowed his car to 15 mph, at the time it hit his Trans Am head on.

Two kids were in the pickup, which was littered with beer cans, and apparently after hitting Sam, the driver remarked, “God!  Look at my truck!”

Sam wasn’t wearing a seatbelt, and he hit the windshield with his head.  A passerby called for emergency services, and tried giving Sam CPR, with no success.

Immediately after the crash, witnesses say that Sam looked normal enough and he would pull through.  He said, “I don’t want to die.  I don’t want to die.”   Then Sam was heard having some sort of conversation… “But why?  ‘Okay, okay, okay.”  The last okay was apparently said very softly and comfortably, like he was talking to someone he loved.

He was taken to the Needles Desert Community Hospital, 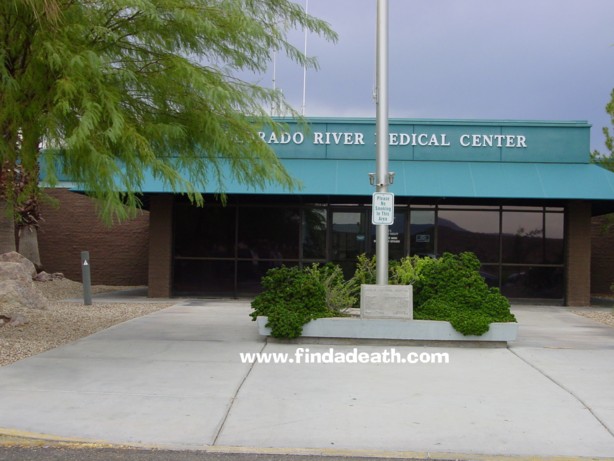 to the emergency room, 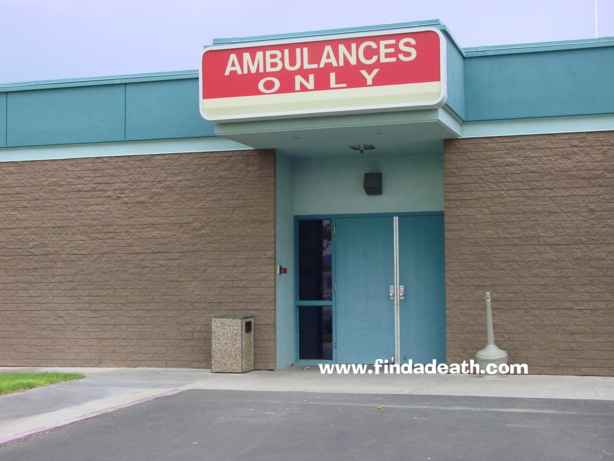 and received dead on arrival.

Cause of death – Multiple traumatic injuries. 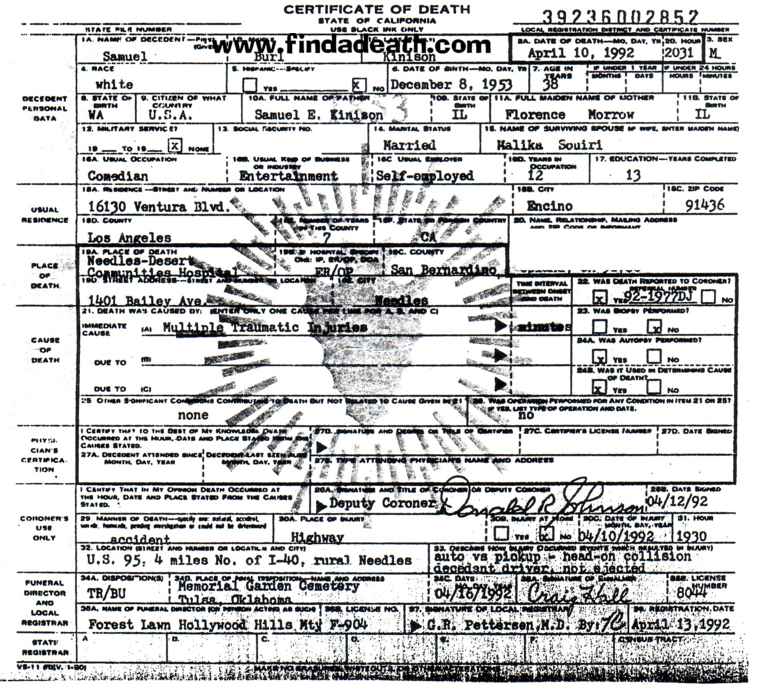 Findadeath.com friend Walt Fritsch sends us this:  About 10 days after the accident, a friend and I went to visit my dad who lived in Lake Havasu City Az. On our way back through Needles, being that we were both big fans of Sam, we decided to find the accident site.  I had read in the paper where the general location was, so I felt pretty confident I could find it.  I felt this way because I had been a cop in So Cal. for a few years, and had investigated hundreds of accidents, many of them fatal. One of the things that you do when you investigate a serious crash, and always in a fatality, is to mark the pavement with spray paint at points of impact, points of rest, and start and end points of skids.  This helps to show them better in contrast with the road when you photograph the accident scene.  Sure enough, after about 3 to 4 miles, when we came to a part of the highway that makes a slight climbing turn to the left; I slowed down to look at the pavement and found exactly what I was looking for: The highway was marked with paint by the investigating officers.  We stopped, got, out and looked around.  In the bushes were a few flattened cans of Bud-Light which looked like they hadn’t been there longer than a few weeks, and some small white parts from the front end of the trans am.  These somehow found their way into my car, and looking at them now, I am sure that I have a piece of the driver’s side front amber clearance light (you can see the intact one on the passenger side in the pic you have on your web site) and some pieces of the front bumper (one of them has a GM part number on it).  It was kind of a sad moment; my friend Brian and I had been fans of Sam for many years; we were at a concert of his at the Universal Amphitheatre in Dec of 89 right after he appeared on ‘Married with Children’.  The whole MWC cast was at the concert and he introduced them.  Also, a bunch of his rock and roll buds showed up and they jammed for almost an hour with him after the show as an encore.  It was a damn shame he died before his time.

Findadeath.com friend Beth sends us this:

I was reading a book called “I Killed: True Stories of the Road from America’s Top Comics,” and there was a little anecdote (told by Dante the Comedian) about Sam Kinison’s funeral that I thought you may be interested in. I love that there was an emcee at a funeral…

“Sam Kinson was a big influence on me. He was really the first comedian to achieve rock-star status. So when I got to get to know him at The Comedy Store in the early 90s, I felt very lucky. Within a year of getting to know each other, Sam died. When Carl Labove (Sam’s best friend) called The Comedy Store, just hours after Sam had died in the car accident, I was the guy who answered the phone. It was terrible. That week I went with my girlfriend, now my wife, Margo, to Forest Lawn in Burbank, California, for Sam’s funeral. The chapel was packed wall-to-wall with comedians and celebrities. Richard Belzer emceed the ceremony. Many of Kinson’s friends and family spoke. Pauly Shore talked about Sam’s being like a brother to him and how Sam used to baby-sit him. When Carl Labove was asked to speak, the place went silent. We all knew Carl had been with Sam when he died. Carl spoke for a while and then began to cry, so upset he couldn’t speak. Richard Belzer finally came up to the podium to help Carl down. The whole place was a mess, everyone sobbing. Then, just as Carl was almost back to his seat, he broke free from Richard and ran back to the microphone. He’d stopped crying, and with a big smile on his face he said, “By the way, I’ll be at Igby’s all week! Two shows Friday, three Saturday.” It was hilarious, and a nice ending to Sam’s funeral.”

Findadeath.com friend Ellen Fagan knows Sam’s widow Malika, and says she is fine, and has remarried and got on with her life.  She says:  Sure, go ahead & run the photograph enclosed, strictly in the interests of more thorough journalism, no? She’ll be cool with that. 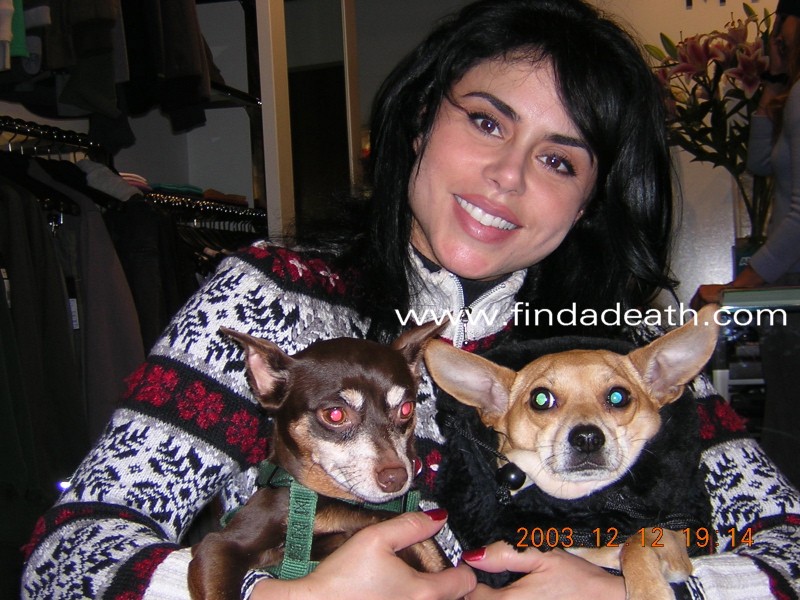 Re “That Night”: She hasn’t talked about it in a while…I think it was something like 13-14 years ago & although it was a kind of defining moment in her life, she’s moved past it. She holds amazingly little anger (that I can see) from past events, she sees them as growing experiences that had to happen.

In fact, M & I just had lunch today! We went to the Bus Stop Cafe, each of us ordered a different type of (forgive the embarrassing vaguely yuppie factor) chicken wrap, & swapped halves with the other. Then we went grocery shopping. No photographic record of this event, though…

Sam used to perform at the old Ciro’s nightclub, now called The Comedy Store on Sunset. 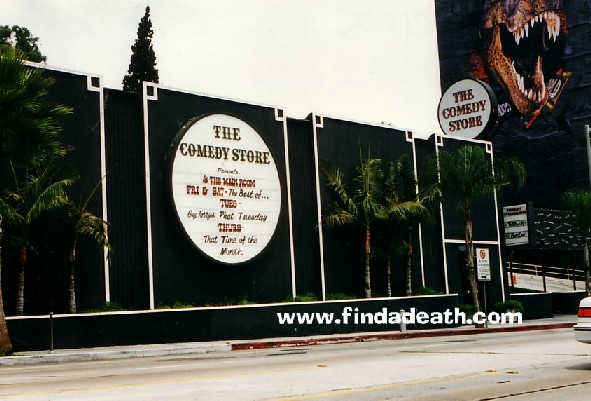 It’s owned by Mitzi Shore, Paulie’s mom.  According to a two faced cow I know, Sam’s show was constantly troubled by the ghosts that apparently objected to Sam’s loud performances.

For more information about Sam, check out this place.