How did I let them talk me into doing this scene? I should have asked for a stunt double.

Vic was an established actor. He had an okay list of credits to his name, which you can view here if you are interested. The little kids in this story, Myca Dinh Le, and Renee Shin-Yi Chen weren’t as established, as they were 7 and 6 respectively. They were filming a segment for the Stephen Spielberg produced film, Twilight Zone – The Movie. This particular segment, Time Out, was about a bigoted man being in the place of those he feels hatred towards. An interesting concept, it was directed by John Landis – famous for taking risks during filming. Just watch The Blues Brothers movie, and you’ll see to what lengths he would go, to achieve a reaction.

Earlier in his career, Morrow was in a film called Dirty Mary Crazy Larry. There was a scene where he was supposed to fly in a helicopter. “I’m not getting up in the helicopter. I have a premonition that I’m going to get killed in a helicopter crash.” The clue phone was ringing – no one picked up.

Vic was living in a house in Sherman Oaks.  Couldn’t see the house very well, but the gates were extremely visible. 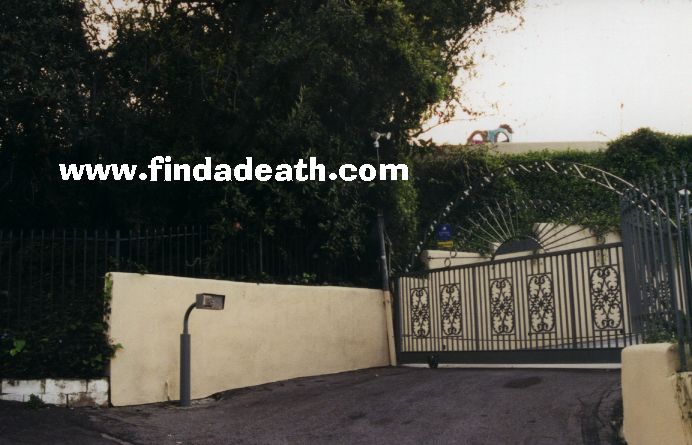 Apparently his street was private, so I didn’t snoop in his mailbox. 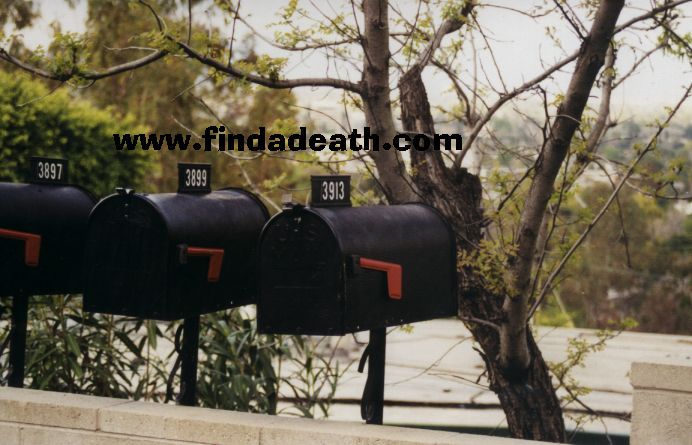 The two children in the scene were not professional actors, and they weren’t on proper work permits. 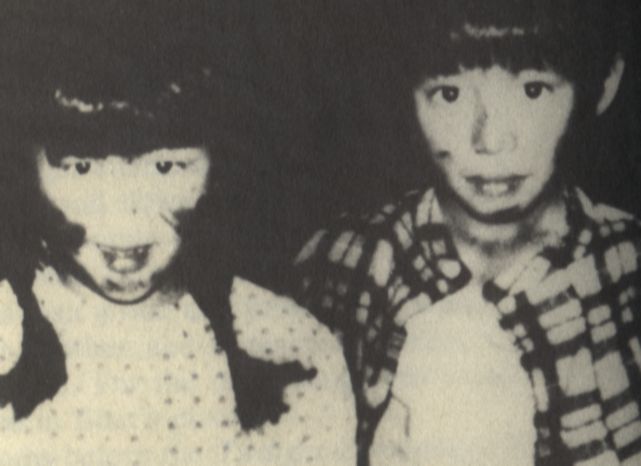 Their sequence was to be filmed around 2 a.m., and contracts for children normally stipulate that they be finished much earlier. The children’s’ parents were thrilled to have her family involved in a real Hollywood film, and Landis wasn’t that bothered with dotting the i’s and crossing the t’s. The segment was to take place in the jungles of Vietnam – the real location being Indian Dunes Park, a dirt bike park near Six Flags over Magic Mountain theme park.

At 2:20 a.m. on the morning of July 23, 1982, the final shot of the sequence was being filmed. Morrow would have two children in his arms, wading across a knee-deep river in the (obviously) dark. Also in the shot would be a village under military siege, and a helicopter coming towards them. The shot would be littered with gigantic explosions. It didn’t go well.

My friend Jody and I went on a trek to find this park. Finally found the intersection of where it should have been, but had no luck. 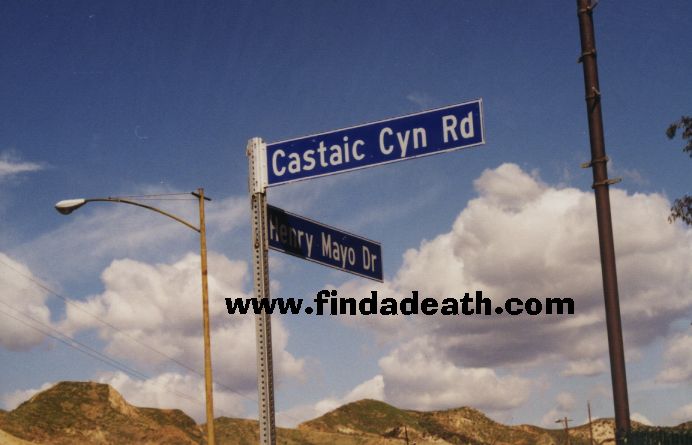 After driving around for a bit, I found a fire station and went in. 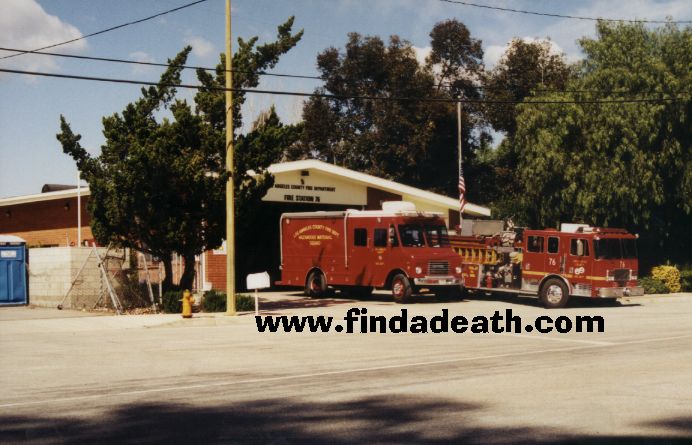 After Landis called ACTION!, the scene commenced. Morrow and the children, trying to get thru the river, while these amazing explosions were pounding all around them. 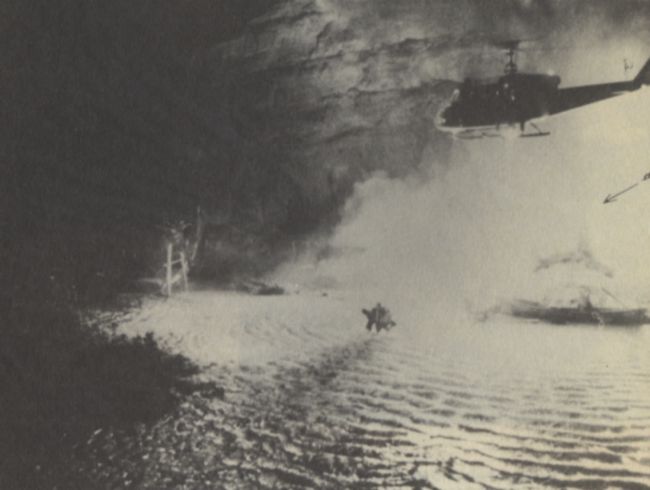 Even the special effects people were a bit freaked out. Then the helicopter enters the scene. Landis screamed, “Lower! Lower! Lower!” to direct the chopper downwards, and it actually came to just 24 feet above the water. Morrow must have been shitting himself, but you know what? It was to be the last one of his life.

There were cameras whizzing away during this entire event. There was even a guy standing on the skid of the helicopter, filming the entire thing. These explosions were big. Way big. Just when the pilot of the copter was about to split the scene, two more blasts came, and he went out of control. Everyone that could, got the hell out of there. Vic lost his grip on Renee, but in the time he tried to get her back, the helicopter landed on top of her, crushing her to death. The 40 foot in diameter blades decapitated Morrow and little Myca Le. The cameras were still rolling.

Jack Rimmer, one of the fire-safety officers, covered Vic Morrow’s torso and set it on a bank. As he was wading across the river to the village to douse the fires there, Rimmer found Myca Le’s head in the water. A crew member brought over a plastic garbage bag and placed the little boy’s severed head inside. Special effects technician Kevin Quibell located Vic’s head, which was placed in another black plastic bag.  Post accident, the helicopter sat in place. 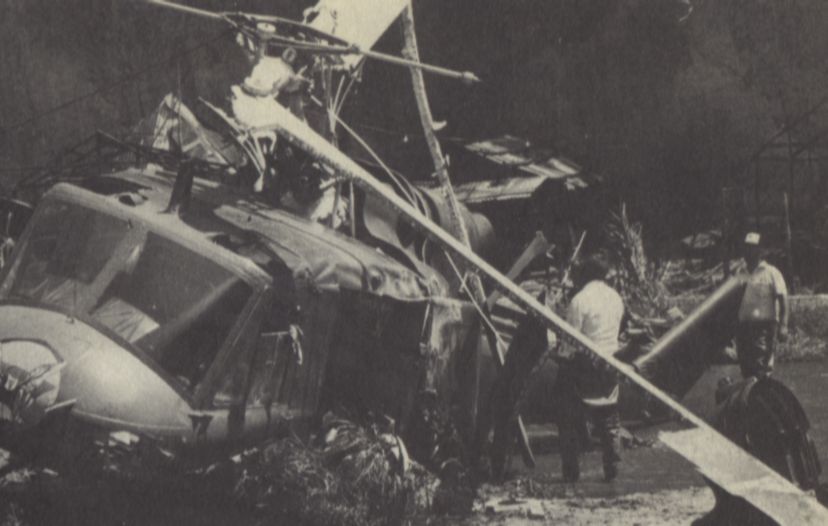 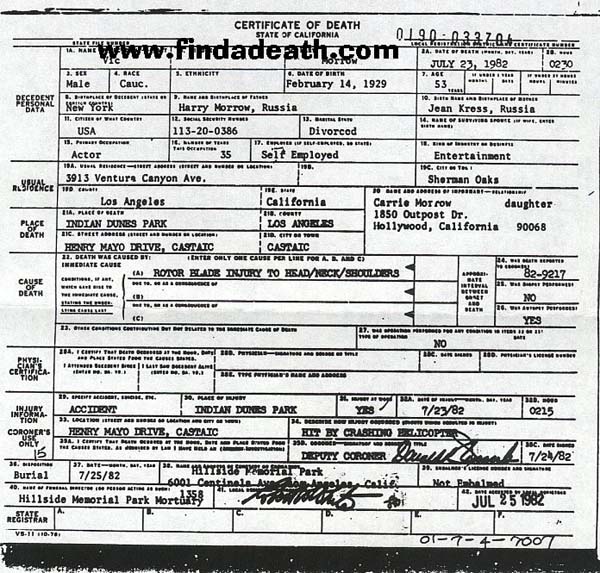 Many people were taken to emergency room of the nearby Henry Mayo Newhall Memorial Hospital in Valencia, for treatment of injuries and shock. 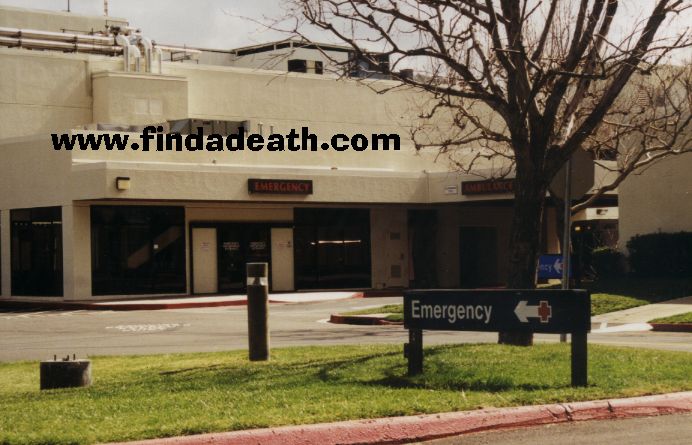 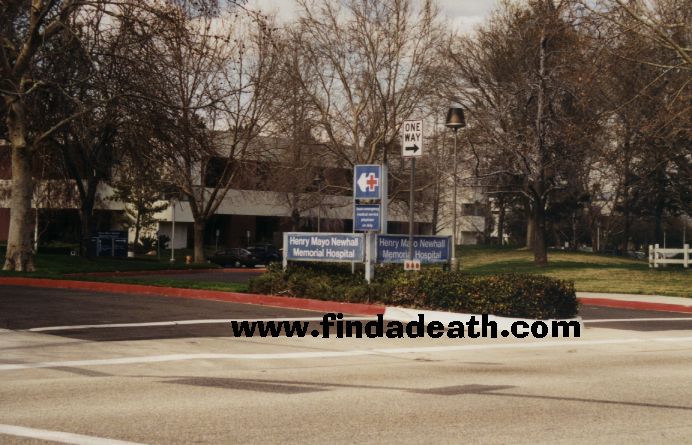 Vic’s funeral took place on July 25th, and John Landis gave a eulogy. He is buried at Hillside Memorial Park. 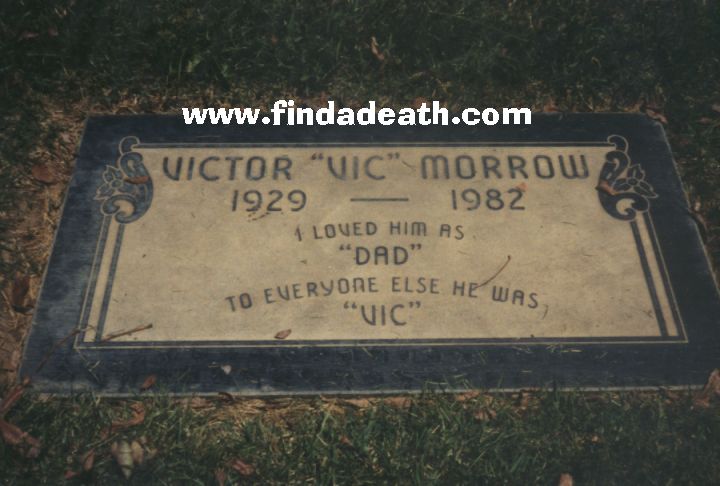 On July 27th, both children had their funerals, which Landis also attended. Renee is buried in Forest Lawn Glendale. 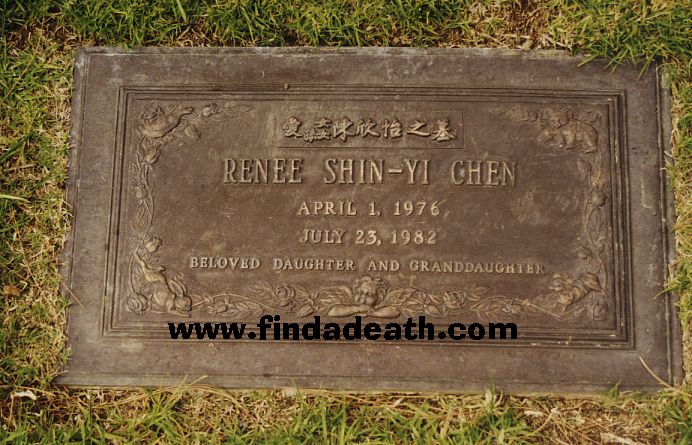 Myca Le is buried in Cerritos. 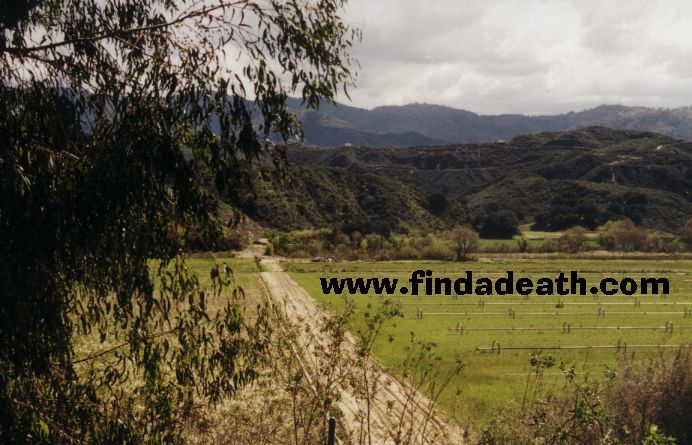 I really don’t know what they do in there, but you can’t get in. No matter how hard you try. And I did.  This is the road we took, 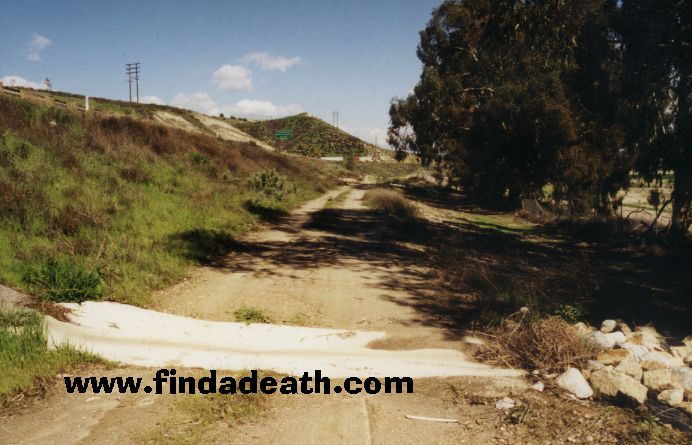 to the closest we could get. 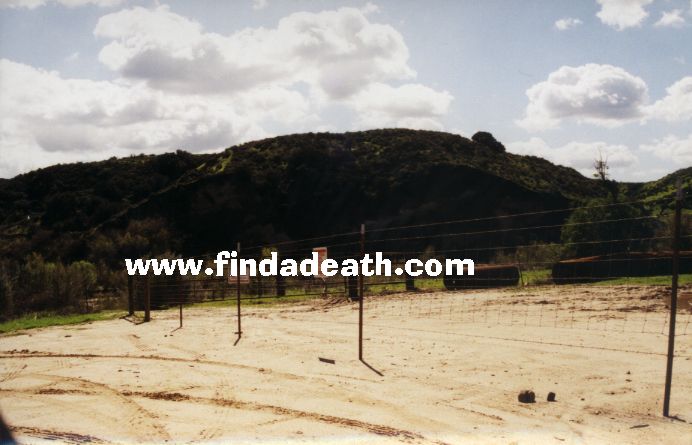 Added May 2002:  Findadeath.com friend Mike Jones sends us this:  Enjoyed your article about Vic Morrow and the filming of “The Twilight Zone“. FYI: Indian Dunes is now owned by the Newhall Ranch Development Company in Newhall, California. They closed the area to movie and film production some time ago.

Indian Dunes has been used for many movies and television programs, most notably “Black Sheep Squadron” with Robert Conrad and “Some Kind Of Hero” with Richard Pryor. I believe the last film made at Indian Dunes was “The Rocketeer” and the last television production was “China Beach”. There were many silent films and westerns made here years ago and I believe that part of “Escape From New York” was also filmed there.

The Newhall Ranch Development Company owns practically every inch of land in the area and closed the area in the early 90’s for what they termed “agricultural use”, but everyone and their brother knew what would be next. Currently there are preliminary plans to construct over 20,000 homes in the area, thus destroying what may be the very last open and unobstructed parcels of land in the region. There has been a HUGE uproar over the proposal and, much like Los Angeles before the LA river system, the big gripe is over water and the amount needed to supply the huge development.

There are two books which discuss the tragedy in detail. The first, “Outrageous Conduct”, you mentioned. However, there is another book entitled “Special Effects” by Ron LaBrecque that is equally mesmerizing. It even suggests that Steven Spielberg, Exec Producer, was on the scene immediately after the accident, but left before the authorities arrived. Oh, well, that’s HOLLYWOOD!

Everybody filed lawsuits. I mean everybody. Landis went on trial for involuntary manslaughter, but was acquitted. Warner Bros. settled the civil suits for about $2 million each.

Vic had two daughters. One called Carrie, the other one messed her name about and is now called Jennifer Jason Leigh. Vic’s will left everything to his daughter Carrie, and a hundred bucks to Jennifer. They didn’t get along.

Many thanks to Stephen Farber and Marc Green, and their fantastic book Outrageous Conduct:  Art, Ego and the Twilight Zone Case.  It really is fascinating reading.

September 2002:  I have a cousin who did 13 months as a Marine grunt in Nam back in 68-69. He said that in the area he was in, the South Vietnamese Army Commanders showed reruns of Vic Morrow’s early sixties series COMBAT! to their troops. They thought old Vic was a badder ass than John Wayne himself. They went nuts for the guy.  Years later, I bought a book on armored units used in the Vietnam War. (I used to build model dioramas…I know, super geek stuff, but it kept me from stealing hub caps.) I found a photograph in it of an ARVN tank circa. 1968, with VIC MORROW scrawled across the turret in huge white letters. Crazy world, man… Seriously crazy world. Peace.

UPDATE February 2005, from Findadeath friend Collette:  Scott: I don’t know if this information is anything you care to revise your reporting for, but here goes.

Dick Peabody, the actor who portrayed “Little John” in the “Combat” series, had kept in contact with Vic Morrow. Upon his death, Vic Morrow’s first wife and mother of his two children (Barbara Turner) asked Dick Peabody and Rick Jason to perform the eulogies at Mr. Morrow’s funeral. She also requested they help with her two daughters in any way they could.

It is reported by Dick Peabody that John Landis showed up at Mr. Morrow’s funeral unannounced, and gave an unrequested and rambling eulogy that sounded more like a plug for the “Twilight Zone” movie than anything else. This idiot’s eulogy offended and upset Mr. Morrow’s family and friends.

If you are in any way interested in this information, you can access www.CombatFan.com (click on “Cast” and then Dick Peabody and the article “In Harm’s Way: Vic Morrow’s death on the set of the Twilight Zone movie”). There is an interesting quote Mr. Peabody makes note of – he claims it is one the last things Mr. Morrow said before his death, but he does not name his source for the information.
I was not personally at the funeral, nor did I personally know the late Vic Morrow or the late Dick Peabody.  I am simply a fan of Mr. Morrow’s, and consider John Landis to be a careless, idiotic, egotistical man responsible (indirectly) for the deaths of three persons.

Thanks for listening, Colette

Thanks for the info, Collette!