A great fear is coming over me.

Kilian was born in Jersey City.  His family was in the laundry business.  If the family had it’s way, Victor would have continued the family trade but an argument sent him reeling to NYC to become an actor.

Victor Kilian began his acting career on the stage.  He became successful in vaudeville and in plays.  One play, Valley Forge, he appeared without pants.  The running joke was that he could never find a pair that fit.  It was a hit but people kept wanting him to do “the pants routine”.

“Imagine making a bid to fame on a no-pants basis.  Imagine being condemned never to wear pants again.  They have me scared.  I go over my clothes daily in the closet to see that no one has absconded with my trousers, thus forcing me into my terrifying routine.”

Kilian went to Hollywood in 1930 and signed a contract with Columbia Pictures.  He didn’t have leading-man looks so he gratefully accepted “character” work, though I don’t know what the hell that means.  Isn’t every role a “character”?

In 1942 he lost use of an eye during a movie-shoot with John Wayne in Reap the Wild Wind.  He was one of the unlucky ones that were blacklisted in Hollywood due to McCarthyism.  He returned to the stage.

Victor was married for three years to Daisy.  Their union produced a son, Victor.  Junior, I suppose.

Trivia: Victor was a co-star in Dr. Cyclops with Dirty Bird Dekker. 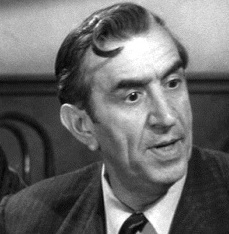 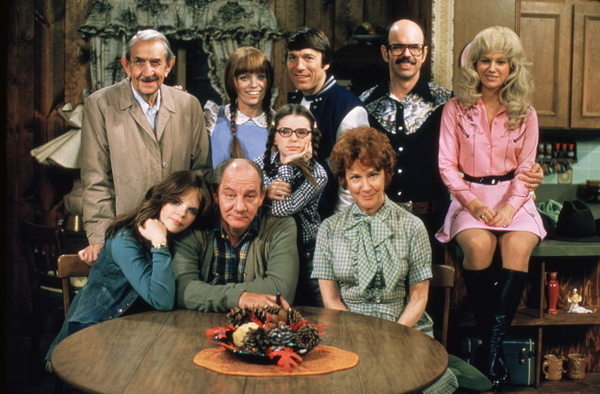 “I used to feel sorry for people who worked in soap operas and I still do.  I tell you, it’s SUCH hard work.”

One description of his building called it a “luxury” apartment.  I would not call The Lido luxury, though I’m sure it wasn’t the slum it came to be.
Not classy digs. 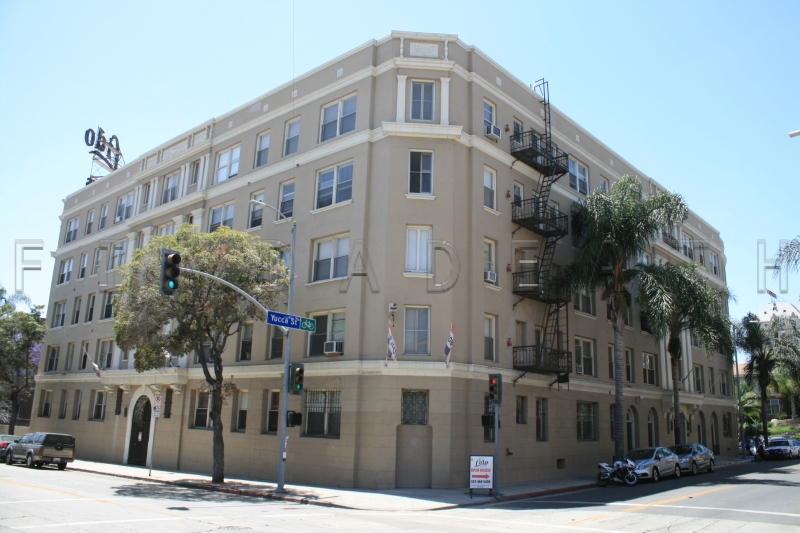 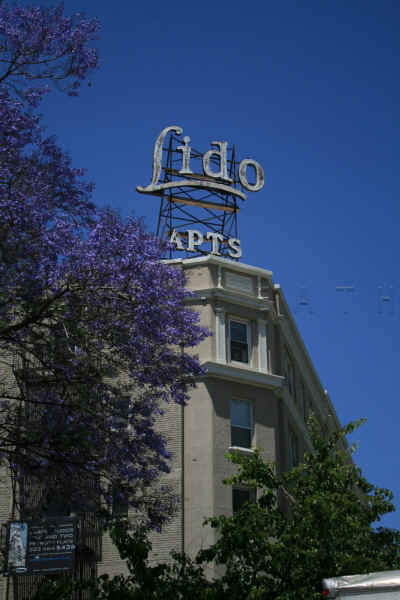 What we know:  He was last seen getting his newspaper by neighbors on the 9th.

Victor was found slouched on his left side in front of his recliner which was located in front of his television.  The television was on.  He had a hearing aid in his left ear and an earplug for the TV in his right ear.  According to one report, “He appeared to be preparing a late-night snack.”  The poor guy probably never saw it coming.  The apartment was ransacked.  There was no forced entry. 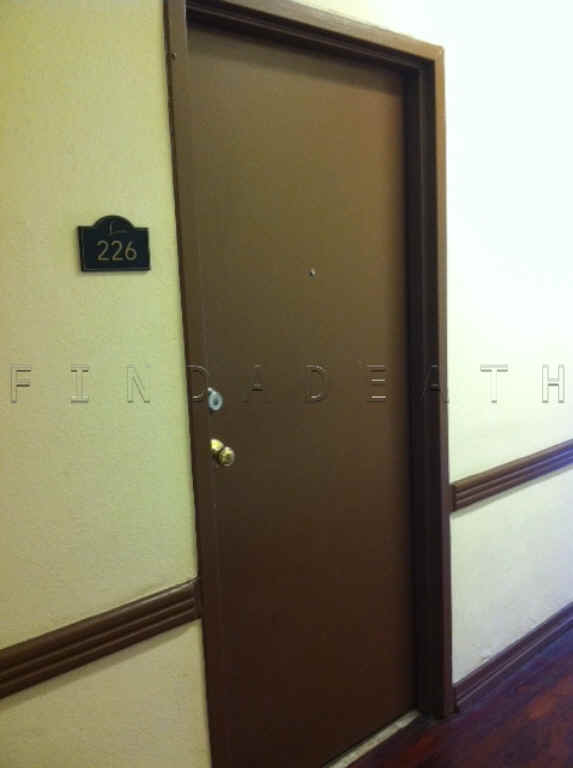 The Coroner noted a stab wound on his inner right elbow made by a “sharp instrument.”

Whoever did this beat the crap out of Victor.  One of the marks left some sort of triangular shape.  The murder weapon has never been found. 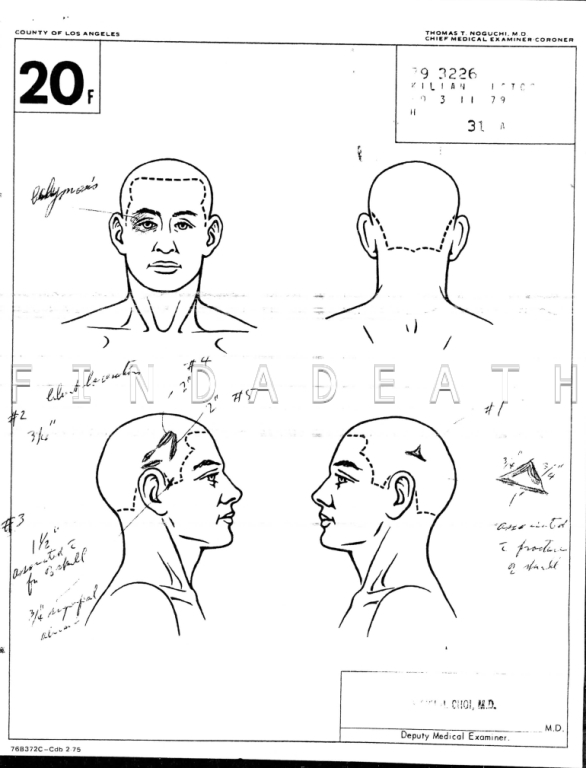 The autopsy also noted a defense injury on his left middle finger.  I hope that was from Victor’s goodbye to the killer.

His official cause of death:  Cranial-cerebral injuring

He died with his pants on.  Brown.  Socks too. 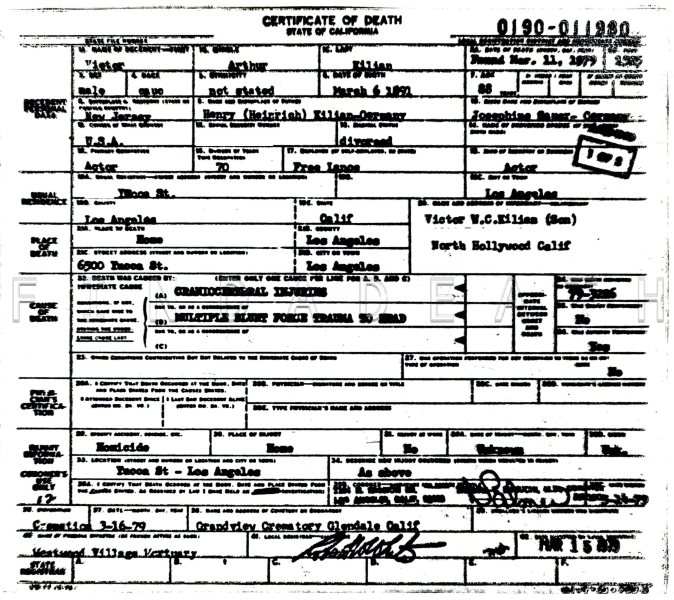 There are several theories about the murder.  Some say he met someone at the bar in the Hollywood Roosevelt Hotel earlier in the week and that person went home with him.  It makes sense that Kilian knew the person and let them enter, but he had a hearing aid AND a tv earplug in.  My guess is that he left the door to his place unlocked.  Perhaps he did know his killer.  I doubt we’ll ever know.

Regret department.  When I first started doing the Dearly Departed Tour 10 years ago, one of my first customers was a lovely lady who, after quite a while, mentioned that she worked for an old actor who was murdered in Hollywood.  She confirmed it was Victor Kilian.  I misplaced her contact information.  I screwed up any chance of asking her proper questions.  I’m a fool.

He was cremated at Grand View Cemetery and his cremains were scattered in the rose garden (I beg your pardon?) in Westwood Memorial Park.  Among is fellow scatterees is fellow thespian Edith Massey.

Trivia: Victor’s last appearance was on an episode of All in the Family which also featured an actor named Charles Wagenheim.  Charles was also murdered, blunt force trauma to the head, just a few days before Victor.  He looked like Kilian too, eh?  A nurse was charged with the murder.  The All in the Family episode ran two weeks after Kilian’s murder.

Trivia:  When Mary Hartman, Mary Hartman was created, Norman Lear chose the name Fernwood as the fictional town where the show took place.  The name came from the street that runs along side the studio where it was shot. 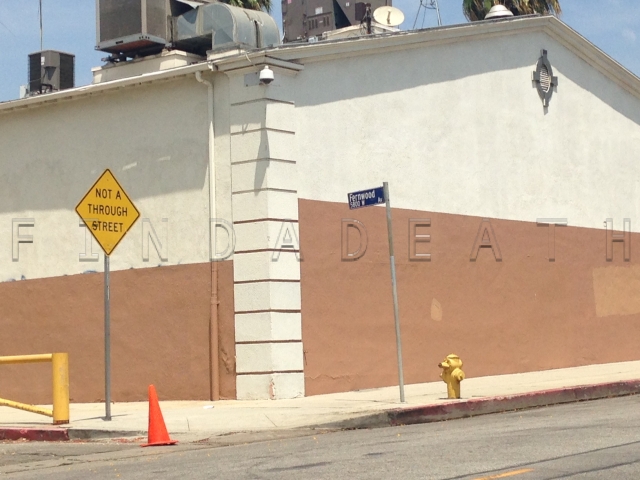 Trivia:  The interior shot from The Eagles – Hotel California album cover is actually the interior of The Lido. I wonder if they knew about the Muuuurrrrderrrrr. 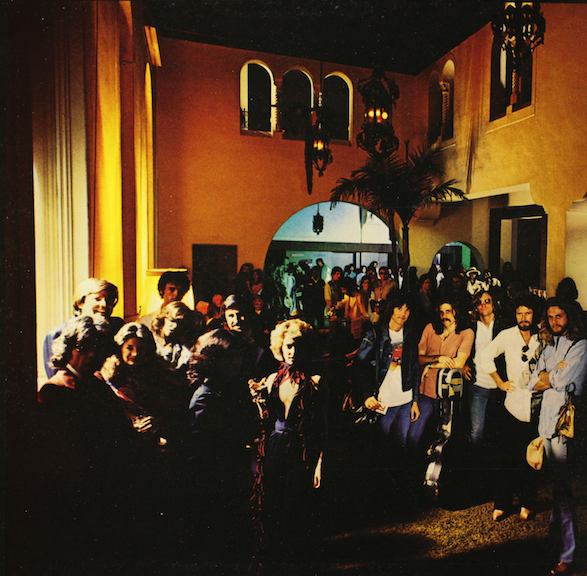 Trivia:  I know of one suicide at the Lido where someone jumped off the fire escape and landed on the iron fence outside.  Another suicide threat was made in early 2014, but this was averted by law enforcement. 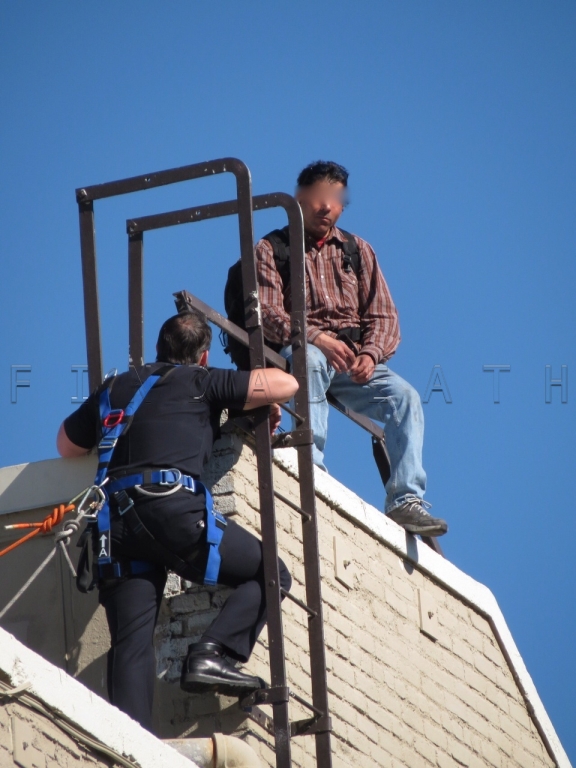 The Lido has douched itself of the people who’ve lived there for decades, paying them to fuck off so they could redo it and charge and extortionate amount for rent.  I wish I could have been there when they filmed Blacula outside.

Kilian was a regular at The Powerhouse which was a terrific shithole bar that is hipsterfied beyond belief.  I had my first Death Hag get together there when I returned from the UK in 2002.  Made some pretty good friends, too.

There have been reports that Kilian’s ghost paces back and forth in front of Grauman’s Chinese Theater, looking for his killer.  There was a Ghost Hunters episode that claimed they found him in Madame Tussauds Waxarrhea, a building built in 2005.  I’m not sayin’, I’m just sayin’. 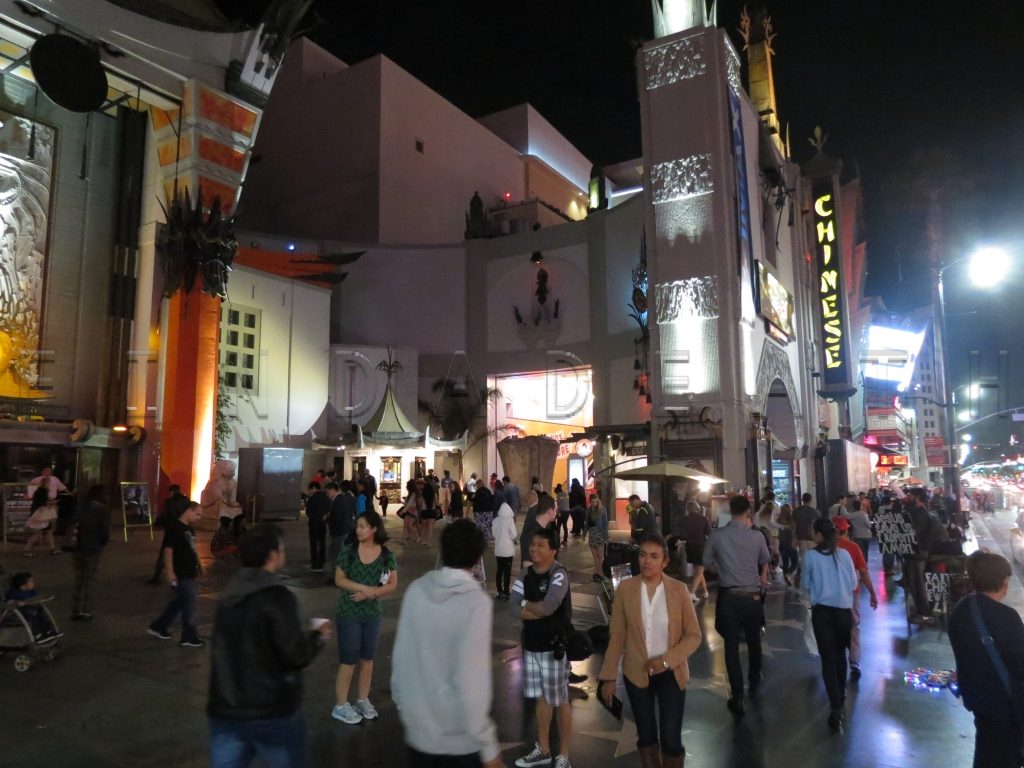 Oh, as a side note:  You know when there is construction on Hollywood Blvd. and they “remove stars” and “put them in storage”?  That’s nonsense.  They destroy them and remake them. 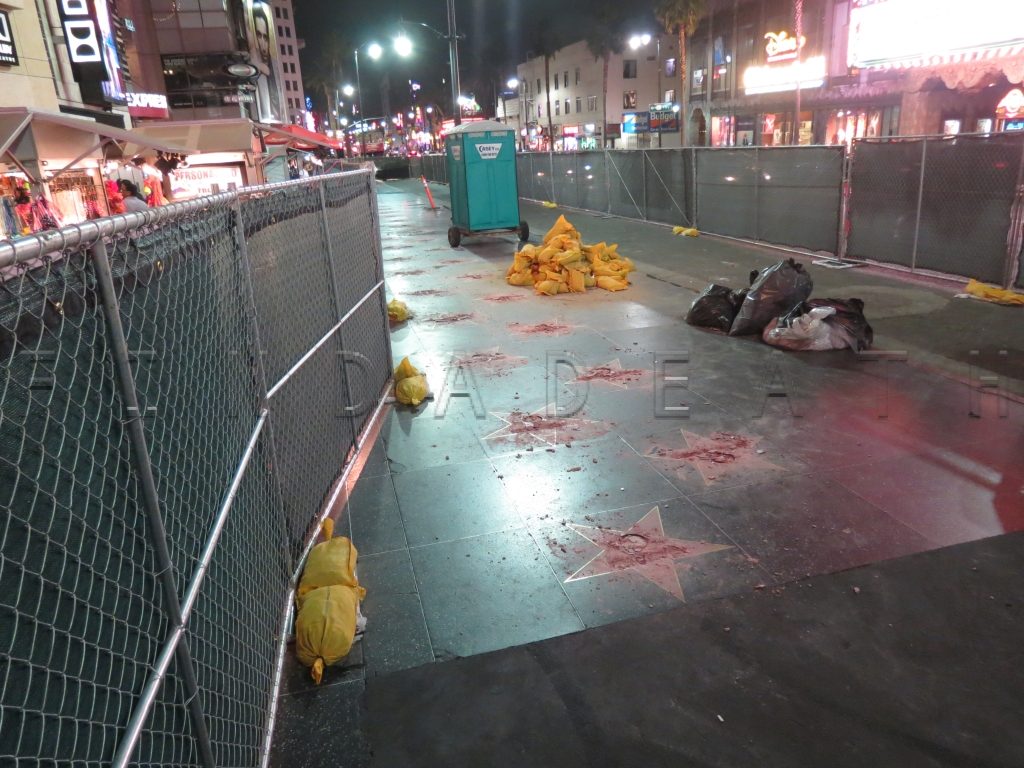 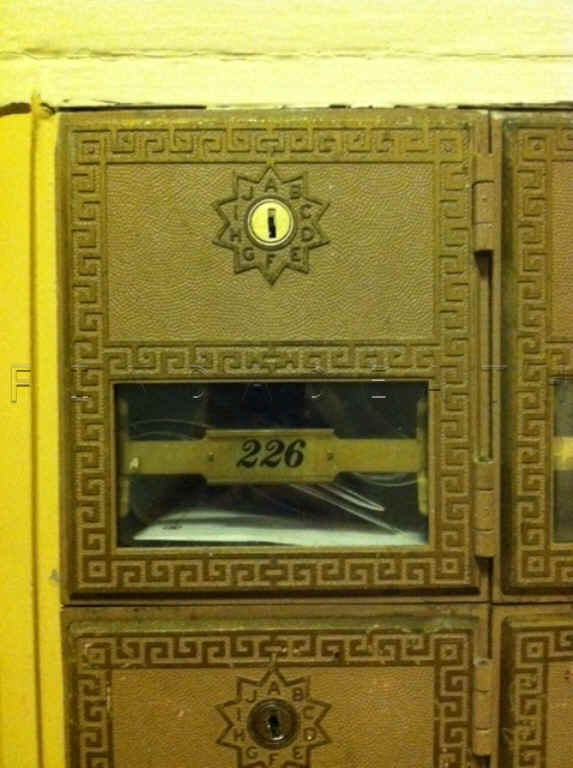 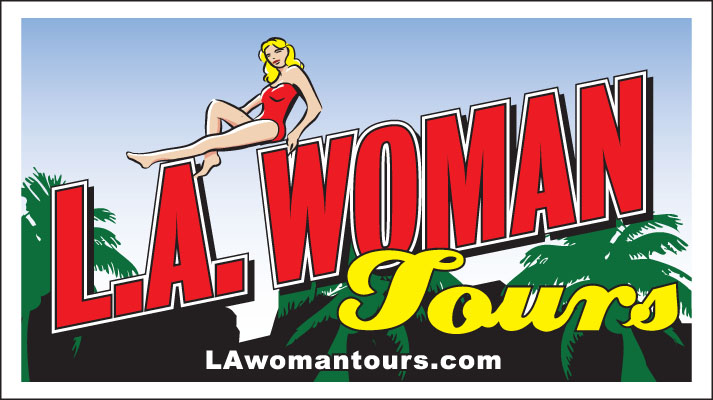