Matthau was born Walter Matuschanskayasky, on October 1st, 1920, in New York City, NY. He was born to Russian-Jewish parents. His father was a peddler from Kiev. He grew up in the lower east side of New York. As a boy, he got the taste of acting when he sold soft drinks and played bit parts in a Yiddish theatre.

After high school, Walter joined the Army, and in World War II was a radioman-gunner on bombers. Matthau served under Lt. Jimmy Stewart. After he left the Army, Matthau enlisted in acting classes. He studied acting at the Dramatic Workshop, in The New School in New York City. He made his Broadway debut in 1948, in Anne of a Thousand Days. Matthau’s movie debut was in 1955, in The Kentuckian.

Matthau married Grace Johnson in 1948, and divorced her in 1958. In 1959, he married Carol Grace. She is also an actress, who has starred in Mickey and Nicky (1976), andGangster Story (1960), which also starred Walter. He had three children: sons David and Charles, and a daughter named Jenny. Walter used the name Foghorn as his middle name on his social Security form, and never got around to changing it.

This is where they lived. 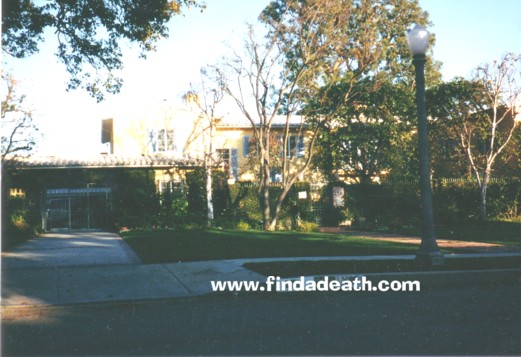 I recall that Walter lost a bundle in the Northridge earthquake in ’94. Mostly art, which he invested in.

Matthau suffered his first heart attack in 1965. In 1968, while filming the movie The Odd Couple, Matthau suffered a second heart attack. In 1975, he underwent quadruple coronary bypass surgery. He spent two weeks in St. John’s Health Center in Santa Monica in May of 1999 with pneumonia, and according to one report, during that time they discovered colon cancer, which spread to his liver, lungs and brain. 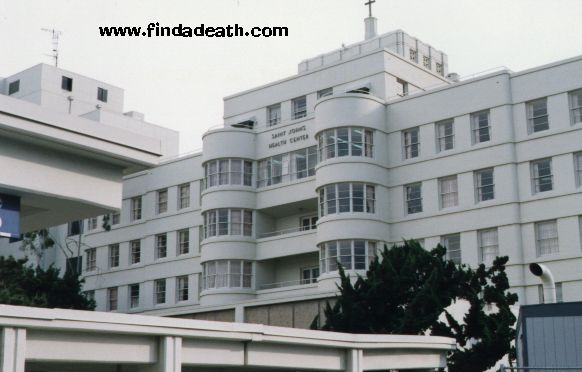 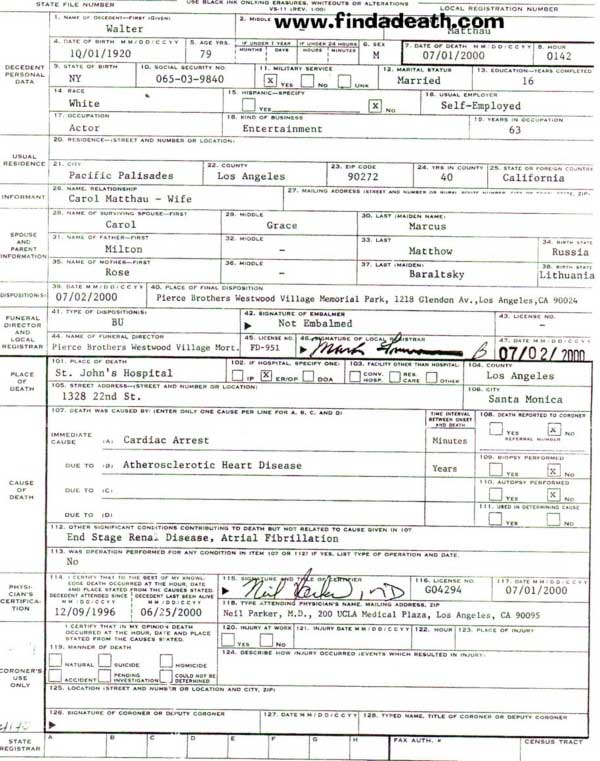 Matthau was buried in a no fuss funeral, just as he wanted. He was buried in a plain pine casket, in a simple service attended by 50 family members and close friends on Sunday, July 2nd. He was buried at Pierce Brothers Westwood Village Memorial Park, in Los Angeles. Matthau starred in 82 films. He once said about his co-star and friend Jack Lemmon that he is “a clean-cut, well-scrubbed Boston choirboy with quiet hysteria seeping out of every pore.” 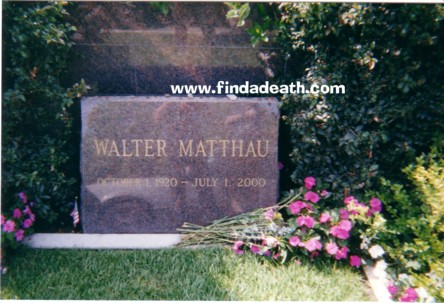 There was a nasty rumor going around that Sophia Loren snatched a watch from Walter’s body, when she viewed it. Matthau’s widow made a statement saying that it was nonsense. She gave Sophie the watch. Oh, and that there was no viewing.

There was a memorial service for Matthau at the Directors Guild, (where Jose Menendez had his) in which guests drank beer and ate hot dogs. People that showed up include Sophia Loren, Carl Reiner, Lauren Bacall, Jack Klugman, Karl Malden, Gregory Peck, Diane Keaton, and Doris Roberts.

Findadeath.com friend Clint Ford sends in many corrections:  First of all, your title “Dickhead & Putz” is incorrect. Matthau only called Lemmon “Dickhead” once, and that was from his first line in “Grumpy Old Men” (Referring to the Jack Lemmon page). More correctly, your title should read “Putz and Moron”. John Gustafson was called “Putz” by Max, and Max Goldman was called “Moron” by John. (You have Goldman listed as “Putz”.)

Secondly, Walter’s birthname was not Matuschanskayasky. Nor was it Matashansky, Matansky, or any of the other reported names. In truth– as reported by the authors of “Matthau: A Life”, Rob Edelman and Audrey Kupferberg–along with Walter’s son, Charlie Matthau– Walter was a teller of tall tales. In his youth, he found the joy of embellishment lifted a story (and the listener) to such enjoyable heights, that he couldn’t resist trying to pass off the most bogus of information, just to see who was gullible enough to believe it.

He told many stories to many reputable people– including the Social Security Department. When he registered, he was amazed that they only wanted him to write his name, and offer no proof of his identity. So, as another of his traditional goofs, Walter wrote that his true name was “Walter Foghorn Matthau”.

His true name, as records from his youth prove, was Walter John Matthow. (For proof of this, check out Walter’s niece’s page on IMDB: Michelle Matthow. However, he was also called “Jake”, so he occasionally signed his name as “Walter Jake Matthow”. When Walter began acting in the Yiddish theatre as a young man in New York, he decided to change the spelling of his name. He believed that “Matthow” looked too brash and crude, and opted for the “more-elegant” spelling of “Matthau”, and he kept it for the rest of his life.

The “Matuschanskayasky” rumor culminated with the release of 1974’s Earthquake. The director, Mark Robson, came to Matthau and asked him to play the starring role in the film. Matthau wasn’t interested and rejected the part, as he didn’t want to have a heavy presence in such a film. However, Robson persisted and pleaded with Matthau to take a part– any part. So, Matthau agreed to take the small part of “The Drunk”. However, after viewing the pre-screening of the film, Matthau was furious. The film featured his “Drunk” character so prominently that he appeared to be a feature player in the film, opposite Charlton Heston. The film was already made, and there was no editing it by this point. However, when it came time to insert the credits, Walter reached into his old bag of tricks and pulled out a whopper: He instructed the credits writer to credit him with his “birth name”, and gave it as the ridiculously-long name, “Matuschanskayasky”. Thereby preventing the famous name “Walter Matthau” from being used on promotional products for the film. What a rascal.

By the way, Walter’s final film– unfortunately, was Hanging Up (2000). A chick flick with a weak plot and a very targeted demographic. Matthau was great in it, though he was quite obviously ill throughout the film’s shooting. There are rumors that Walter and Jack Lemmon were in talks to do one final film together (as they knew they were both fading fast from cancer). Talks were to begin in late 2000, but Walter became critically ill very shortly after shooting on Hanging Up wrapped, and he never recovered.

Carol Matthau was married to Walter Matthau for over 40 years.  She was a good friend of writer Truman Capote, and the inspiration for the character Holly Golightly that Audrey Hepburn played in Breakfast at Tiffany’s.  She often joined Capote at a Manhattan nightclub for 3 AM parleys. At 7 AM, they would buy coffee and doughnuts and eat in front of Tiffany’s.  She left Los Angeles shortly after Walter’s death.

She married three times – twice to author-playwright William Saroyan and once to Walter. Apparently the Saroyan guy was quite a prick. She didn’t have a lot to say that was nice. But both of her husbands had serious gambling problems.

I got to Westwood Memorial Park shortly after her burial, next to Walter. 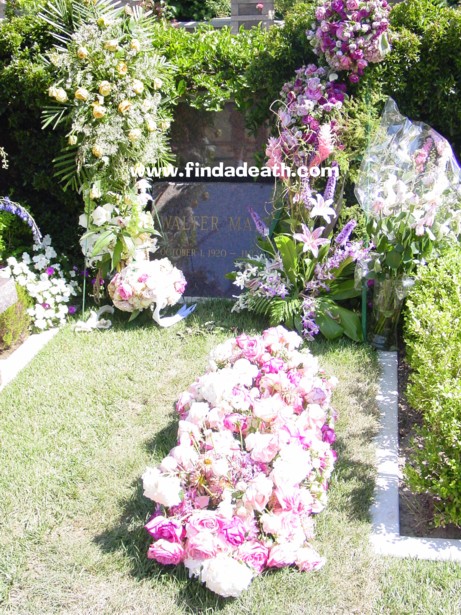 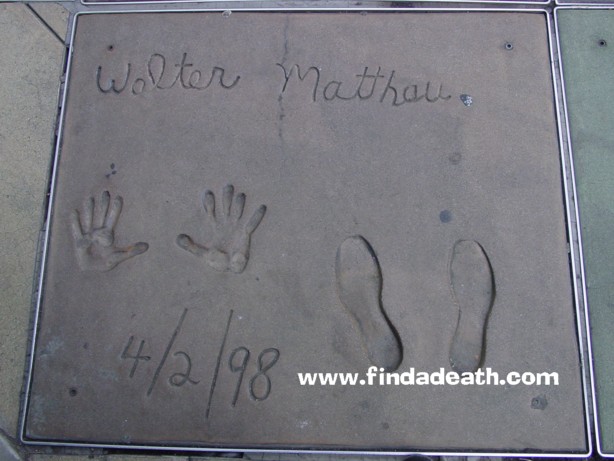 I STILL love your site. Lisa