They nicknamed me “The Oomph Girl”, and I loathe that nickname! Just being known by a nickname indicates that you’re not thought of as a true actress . . . It’s just crap! If you call an actress by her looks or a reaction, then that’s all she’ll ever be thought of as.

Good things happen to good people, though sometimes it takes a while. From what I can gather, Ann Sheridan was a good person. Several accounts claim she was quite “brassy” and definitely up it.  We like Ann.

PR person extraordinaire Lisa Burks writes, “Sheridan, dubbed ‘The Oomph Girl’ at Warner Bros. During WWII for her earthy sex appeal (a moniker she openly disliked but eventually learned to accept), died one month shy of her 52nd birthday. In late 2004, biographer Karen McHale discovered that Sheridan made a will just months prior to her death which stated that she wanted to have her cremated remains interred in a niche in a columbarium in Los Angelesï. McHale tracked down the executor of Sheridan’s estate, business manager Bart Hackley, who recollected that Sheridan’s third husband, the late actor Scott McKay, made the seemingly temporary arrangements. McKay passed away in 1987, leaving unanswered questions about why Sheridan’s written instructions were not followed. Attempts to locate McKay’s survivors have been unsuccessful. ‘The job of a biographer is to tell a person’s story rather than add to it, so this is an unusual turn of events,’ said McHale, a first-time writer who began researching her forthcoming book last summer. ‘But when I learned that the last chapter of Ann’s life was incomplete, I felt compelled in my heart to try to have her final wishes fulfilled. This is being done for Ann because it’s what she wanted.'”

Ann’s last role was on a show called Pistols and Petticoats. She died before the first season was complete. She was an avid smoker, and was quite ill while filming, but according to her costar Carole Wells, 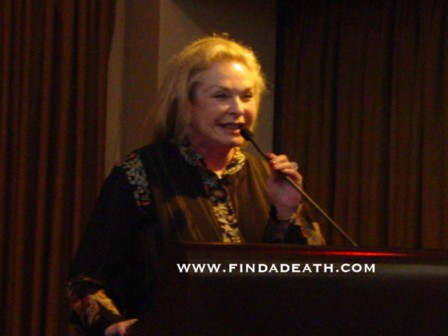 Ann never once complained, though she must have been in agony.

Ann had a home in the hills above Universal City.  It’s been raining like hell here, so the mud was pretty loose on the way up. 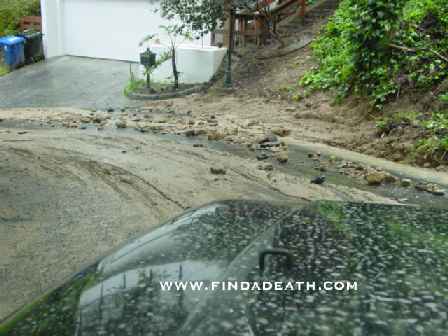 I have my doubts whether the house is authentic, I’m thinking it might be a teardown. 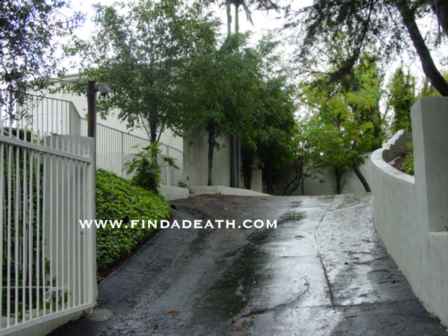 leads to this home, 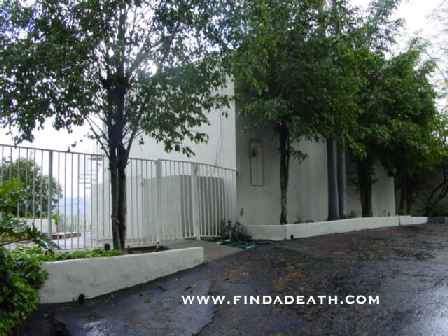 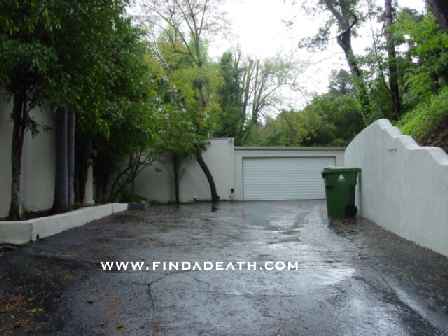 Of course, here is the obligatory mailbox shot. 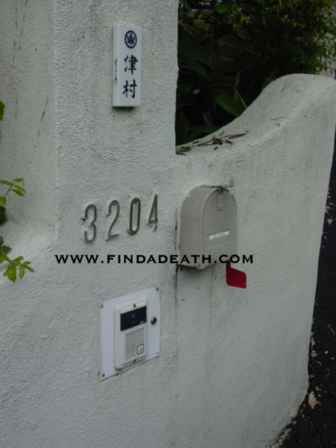 On February 21, 2005, the day that would have been Ann’s 90th birthday, a memorial service was held in the chapel at Hollywood Forever, and her niche was unveiled. 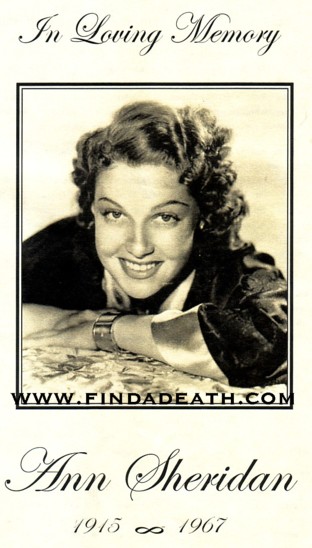 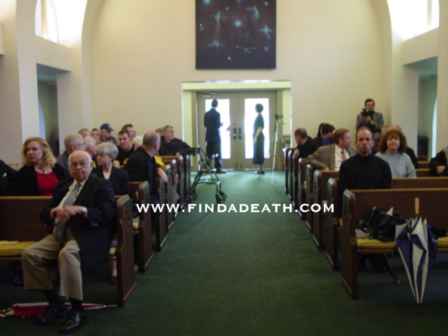 Statler and Waldorf from The Muppet Show were there. Okay, not really, but its uncanny isn’t it? 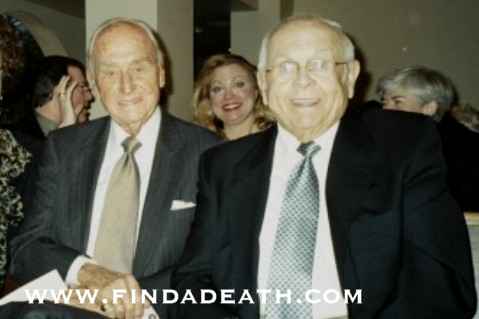 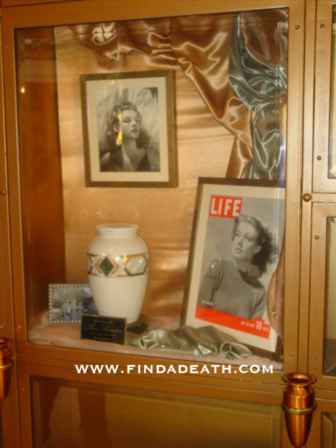 Honorary Mayor of Hollywood Johnny Grant managed to show up for this. 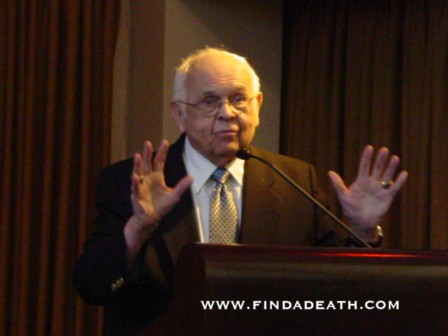 He told some pretty neat stories about Ann. Apparently they were the very best of friends ever, and he insinuated that they had sex. He did say they drank. 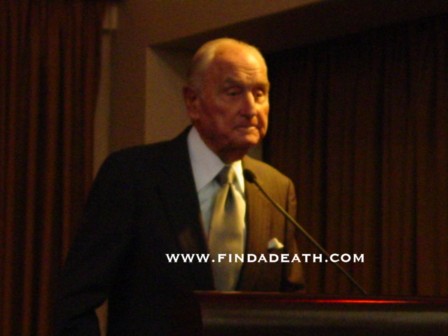 This man shows up to the opening of a bag of chips. He knew Everybody in Hollywood EVER, and he’ll be the first person to tell you so. I don’t think he really knew Ann, but to listen to him, he did. And very well. He also said that Ann made up some nickname having to do with his initials, and mentioned twice that the name was “very masculine.” I guess All Cock, even though the thought makes me cringe.

I wonder why, if she had such great friends, Ann sat in a storage closet for so long.

Ann’s cousin, the Reverend Sallie Watson, opened and closed the service with dignified grace, shedding light on what she knew of Ann’s home life while growing up in Texas. 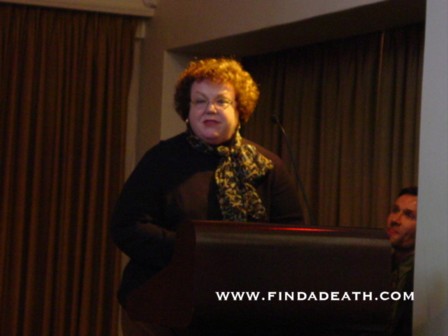 Hollywood Forever put together a terrific video presentation of Ann’s biography. All in all, a terrific ceremony, and I was honored to be invited.

Since it was her birthday, cake was served. 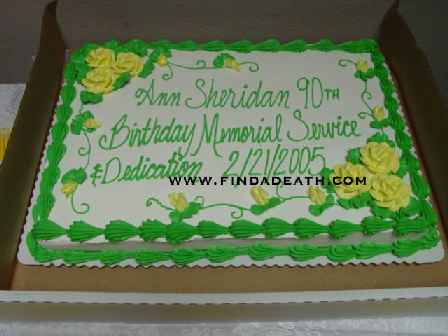 I got the ANN bit, and steered clear of Johnny Grant. 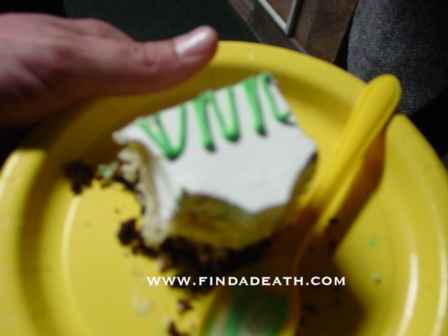 Good Job Karen. Thanks to Tyler at Hollywood Forever for donating such a nice (and costly) niche, and his sex worker employees for helping to spring Ann. Thanks to Mike Steen for getting Ann a very nice urn, and getting us her death certificate.  Thanks to Harry as well, for the company, and for being Harry.

Trivia:  When they removed Ann’s cremains from the temporary urn, they found a pair of earrings and her wedding band. 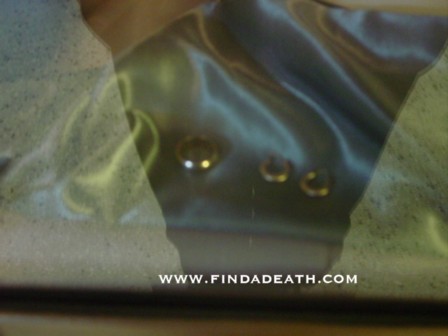 Elsewhere in the cemetery, there was obvious problems due to the recent rains.  The new Johnny Ramone statue was flooded up to the base, 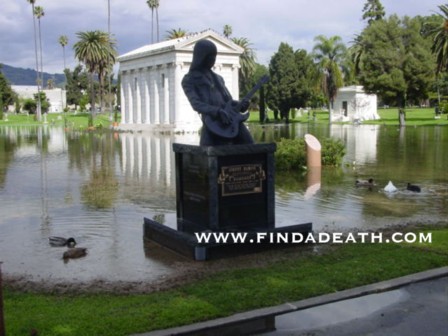 Hattie McDaniel’s monument was almost completely submerged (note the fish at the base), 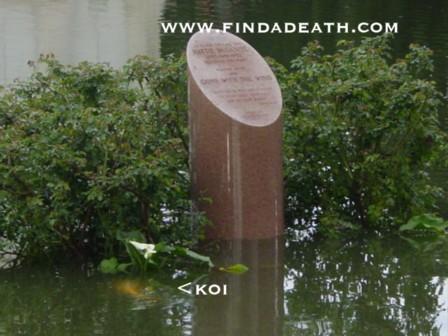 and the walkway to the Clark mausoleum was also under water. 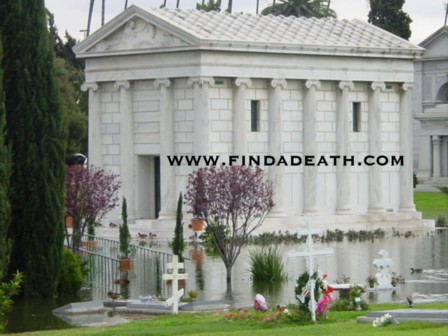 Thanks to my pal Steve Goldstein for the new and improved Statler and Waldorf guys.