One is always considered mad when one perfects something that others cannot grasp.
Well, I started thinking about what you were saying about how your movies need to make a profit. Now, what is the one thing, if you put it in a movie, it’ll be successful?
This story’s gonna grab people. It’s about this guy, he’s crazy about this girl, but he likes to wear dresses. Should he tell her? Should he not tell her? He’s torn, Georgie. This is drama.
We are going to finish this picture just the way I want it… because you cannot compromise an artist’s vision.
Read more at https://www.brainyquote.com/search_results?q=Ed+Wood
Why if I had half a chance, I could make an entire movie using this stock footage. The story opens on these mysterious explosions. Nobody knows what’s causing them, but it’s upsetting all the buffalo. So, the military are called in to solve the mystery.
Yes, but if you take that crap and put a star in it, then you’ve got something.
Show More Quotes
Show less

Ed Wood liked to dress in women’s clothing and Ed liked to make BAD films. He is largely responsible for the last years of Bela Lugosi‘s life, being reasonably happy ones (as in Not Forgotten). We like Ed. The film Ed Wood, that Johnny Depp starred in, was great. One of the best films about Hollywood ever made, right alongside Sunset Boulevard.

For many years, Ed lived in an apartment on Yucca, in Hollywood. The address is 6383 Yucca, and you couldn’t pay me to go back there for a photograph. Findadeath.com friend, Chad Jones, braved the neighborhood for these snaps.  Unfortunately, they are doing work on Ed’s old building, but this is it. 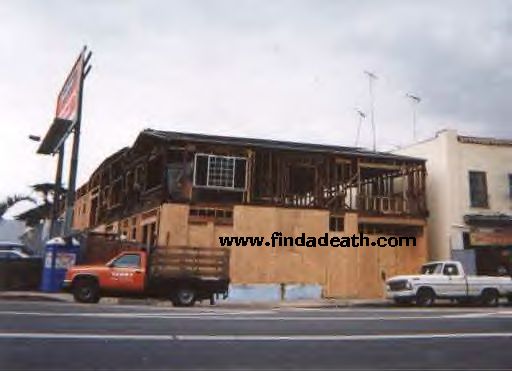 You literally have to wade through the crack dealers and risk people trying to get in your car as you drive by. Honest, it’s happened to me. They say that when this 7-11 was opened next door, it really caused the neighborhood to change, for the worse. 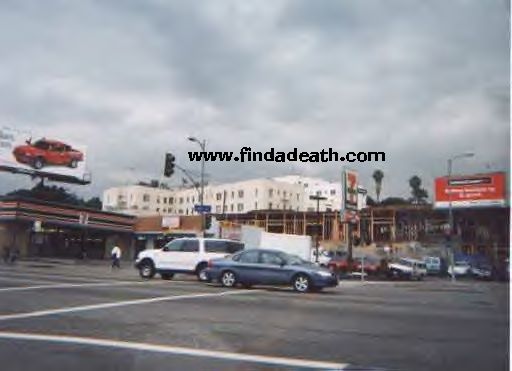 I heard that more people get killed at that 7-11 than any other.  I don’t doubt it. Just around the corner is the Pla-Boy liquor store. 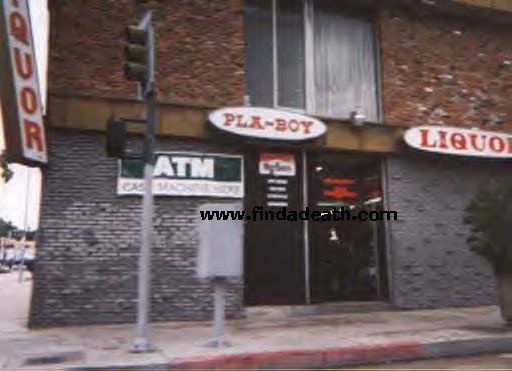 They used to cash Ed’s checks for him because he bought all his booze there.  Across from Ed’s old place is a building called The Lido. It had a bar in it, and Ed liked bars. A lot. 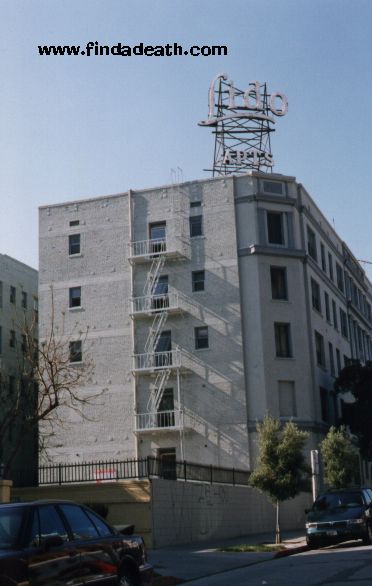 Ed eventually moved to an apartment building on Laurel Canyon Boulevard, in the valley. 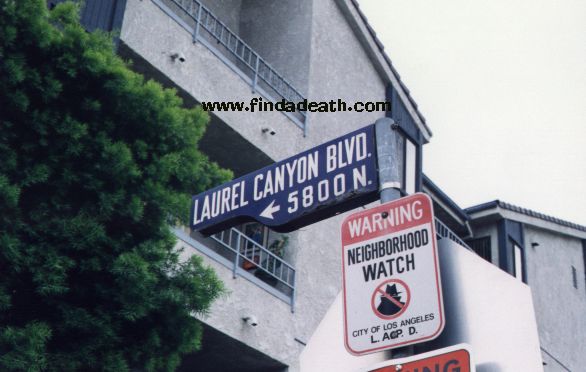 His building was located at 5636 Laurel Canyon Boulevard. 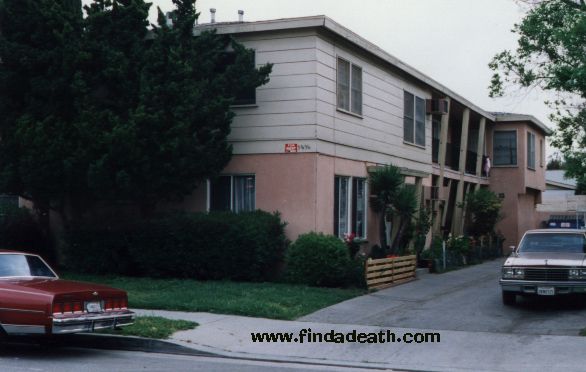 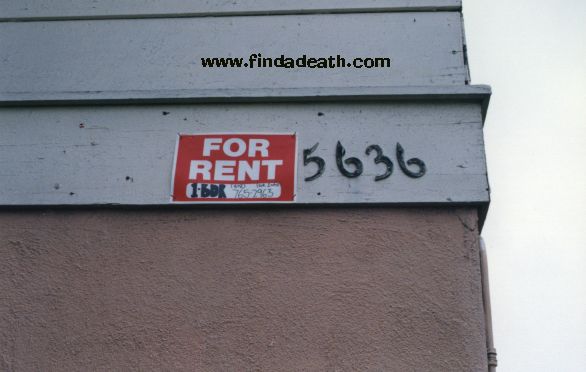 Here’s the front door, and here’s a window. 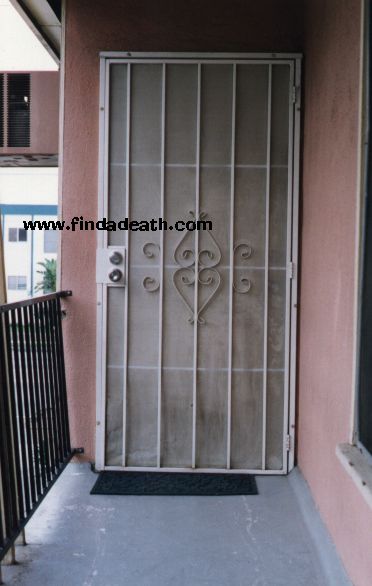 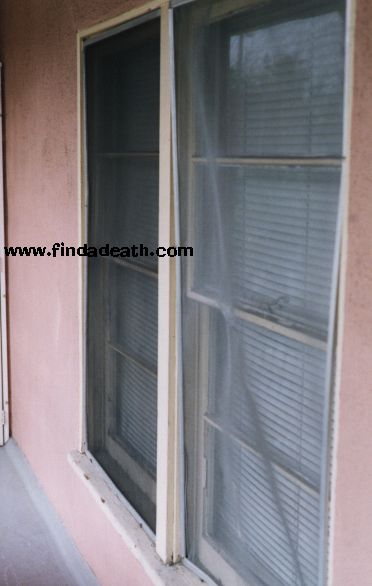 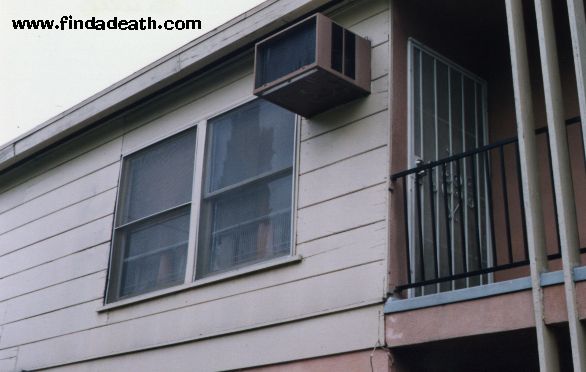 According to the book, Ed Wood, The Nightmare of Ecstasy, by Rudolph Grey: He was living with his wife, Kathy, when he had a heart attack. (I’m positive that it was brought on by years of heavy drinking, although that isn’t mentioned on his death certificate). Ed’s friend, Peter Coe, was over and Ed, Kathy and Peter had a few drinks. Peter was insisting that Ed go into rehab and he had to stay semi-sober or they wouldn’t admit him. Ed decided to go into a bedroom and watch football. 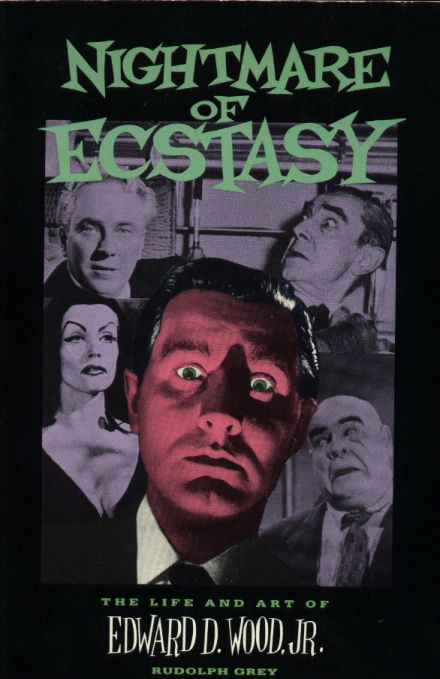 By 11am, he had at least 4 shots of vodka and said, “I feel sick,” and then fell asleep. A while later, more friends arrived, including a nurse called Beulah Ames. Beulah asked after Ed and Peter told her, “Ed’s in the bedroom, resting.” Beulah entered the bedroom and screamed, “Oh, my God. Eddie’s dead!” Peter and Kathy went into the room and found Ed lying there with his eyes open. They called an ambulance, and, according to Peter Coe, they removed Ed’s body in a garbage bag. He was 54 years old. 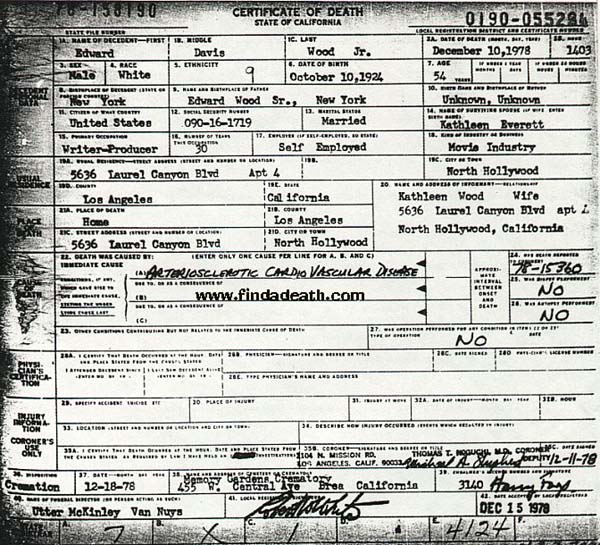 Ed was cremated (he had a fear of burial) at the Utter – McKinley funeral home, and scattered at sea. There was a memorial service, attended by Criswell, Paul Marco, Buddy Hyde and David Ward.

Trivia: Regarding The Lido – “Fernwood Flasher” Victor Kilian was killed in the Lido. 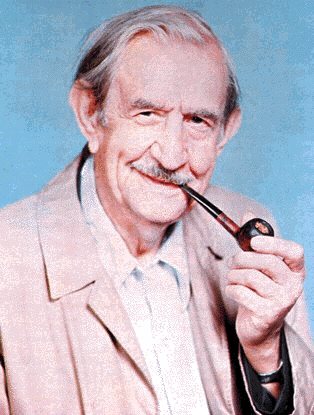 January ’07 update: Ed’s offices were in the Davidian building, just above the Vista Theater on Sunset, where coincidentally 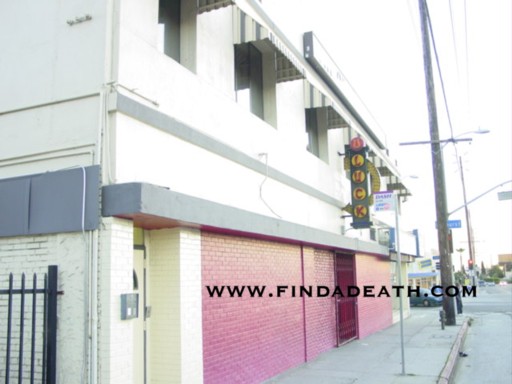 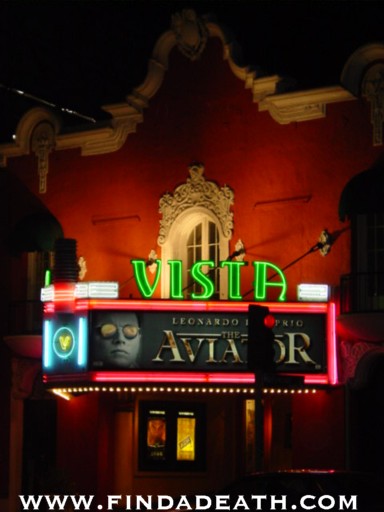 – they premiered the movie Ed Wood, and the stars left their footprints. 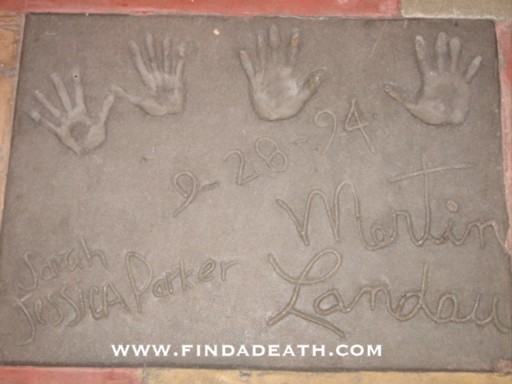 More Trivia: Tim Burton offered Johnny Depp the role of Ed Wood, in the Formosa Cafe in Hollywood. According to Vince, the owner and a bud of mine, they wrote out the contract on cocktail napkins. By all means, GO to the Formosa. They have the best damn drinks in town and the coolest staff. If you see Vince or Cass (the hostess with the mostest), please tell them that Scott, “the death guy,” says HI! If you are lucky, they’ll seat you in Marilyn’s old booth, or the booth that Richard Burton used to pass out in.

A little more Trivia: A lot of the film Ed Wood takes place in the old Brown Derby restaurant. The actual Derby shape of the restaurant has been preserved, although it is now painted silver and above a Korean restaurant on Wilshire Boulevard.  Better than it being gone forever, I suppose. 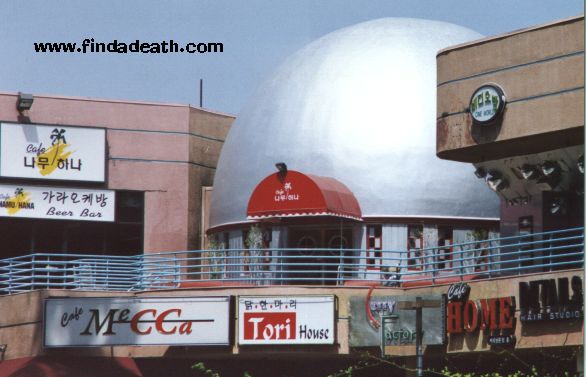 October 1, 2000 – Trivia from Jon C. Darby regarding Criswell, in Ed’s stable of stars:  It’s no secret that Mae West was a notorious fag hag, but she had an odd relationship with one minor celebrity pooftah (gay person). The Amazing (ly Inept) Criswell, Ed Wood’s perennial star, was her “psychic advisor” until he finally admitted he was as full of shit as Elvis after a nine week barbecue and cheese binge.

They remained friends and in a DRIVING MISS DAISY twist, whenever Mae bought a new limousine she sold her old one to buddy Criswell for $1. (Criswell spent his entire adult life sleeping in caskets; it wasn’t because he was a fore-runner of the Goths, but because as the abandoned bastard grandchild of a Mid-West undertaker, he spent his childhood sleeping in the family showroom and was never comfortable in a bed.)

Last Trivia: For what it is worth, this quote is in the book: “According to Ed, he knew every famous drag queen in Hollywood – Milton Berle, Jack Benny, Dan Dailey, Cary Grant. Ed would use that if anyone made a remark – that they always had women’s underwear on.

July 2003 – first hand info: a new buddy of mine, Peter Coe (son of the man mentioned above) got in touch to let me know that the photograph I have of Ed’s last home, is wrong.  Right building, wrong unit.  Upon getting the clarification, he shared this:

Hi Scott, What’s so funny is that I drove past the building the other day, and thought about bringing the digital video camera down for a quick shoot. I don’t give that building much longer with all the redevelopment in the area, so thought it might be nice for the record. I don’t know who lives there now, or if they would even let me take some views, or even if it would be a safe thing to do these days.

My father was on a binge at the time of Ed Wood’s death. Before my parents divorced, his (my dad’s) whole retinue of lost souls (Ed Wood and several Hollywood down and outs) would hang out and drink with my dad at our pool in Northridge. Sometimes Ed was in drag. My mom was away working, and I just figured that this was typical family life.

After the divorce (I was five), I visited my father as infrequently as possible, because he was usually drunk, and surrounded with people like Ed Wood and Paul Marco. Actually, these people were always nice, but kind of hard to take for a child.

By the mid-1970’s my dad and I grew closer. I came to visit him on a Saturday night during my late high school years. I wasn’t feeling too well and wasn’t too happy to find Ed and Kathy Wood at the apartment (remember, it was a one bedroom place) when I arrived. They were completely bombed and after I went to sleep, Ed stumbled over and shattered my dad’s glass cocktail table in the wee hours on his way to the loo. That was all I needed, so I left.

The next day, my father called in tears to tell me Ed had died. I wrote extensively about the funeral for a creative writing class at the time and wish I could find it now. Many of the facts have faded from memory, but I remember taking my father to the event and finding it fascinating, long before there was any public interest in Ed Wood. After my father died, I found Ed Wood’s presidential/veteran death certificate in his belongings.

My dad was a strange anomaly. He went from a peasant child in Yugoslavia to Hollywood via the Royal Academy in London. He was under contract to Universal and worked with many of the biggest stars of the golden era. He had a bad temper and drank too much, and made some stupid decisions along the way.

He was “out” of Hollywood circles by the mid-1960’s, relegated to various television character roles. By the 1970’s, it was much worse. His friends like Ed Wood would come and drool over him, and tell him what a great star he once was. I guess this made him feel good.

He genuinely liked Ed, though. Although my dad really thought his movies were bad, he liked Ed’s loyalty and kindness. He saw through the tragedy and took him in despite (or rather because of) his sorry state.

Fortunately, I became very close with my dad in his final years. He brought up Ed many times, and was pissed at Blake Edwards (another old Hollywood comrade) for not acknowledging Victor Victoria was inspired by Glen or Glenda, whether it was true or not. You can imagine how ironic it was for me when the Ed Wood “mania” began.