Sometimes, dead is better.
When I was a teenager, I wanted to be a portrait painter. As I got to be older, I realized that as a portrait painter I wouldn’t be able to support a goldfish.
I decided to take a stab at acting. I entered the American Academy of Dramatic Art, where one teacher told me I’d never make it – I was too tall.
I love making puns.
Show More Quotes
Show less

In May of 1993, it was rumored that Fred “Herman Munster” Gwynne was terminally ill. Fred’s agent made a statement to the press, “He’s decided to retire from doing anything.” She also lied and said that Fred was healthy, happy and working his herd of Angus cattle on a Virginia farm. Virginia? feh. Here’s the scoop:

Fred wasn’t healthy at all. Within 2 months of that denial, he was dead.

Fred tried like hell to get away from the “Herman” image, but it would never leave him. Sorry, but it’s rightfully so. Who cares about Car 54, Where Are You?, My Cousin Vinny, or even Pet Sematary (okay, we liked that one.)? The Munsters were IT. Fred was asked in 1982 about his favourite roles. He mentioned a lot of plays and Cat on a Hot Tin Roof, then he paused… “and I might as well tell you the truth, I love old Herman Munster. Much as I try not to, I can’t stop liking that fellow.”

Great. So he died in peace.

Findadeath.com friend Nora Lee Liederbach from the Hilton U. Brown Branch Library reminded me that Fred also penned a few children’s books. Most notably, “A Little Pigeon Toad,” “The King Who Rained,” “Pondlarker,” and “Chocolate Moose for Dinner.” Nora tells me that his books were and still are popular with families. Thanks Nora!

He discovered he was ill in January of ’93. A CAT scan on February 3 confirmed the illness, and he underwent surgery at the famed John Hopkins Medical Center, in Baltimore. They found that the cancer had spread to his liver, and the doctors were unable to get it all. He was put on a chemo program.

Not very long before he got the bad news, he and his wife Deborah bought a farm in a place called Taneytown, Maryland, about 40 miles Northeast of Baltimore.

The farm was located on Stone Road, near Bert Koontz road, in Taneytown, MD. Fred succumbed to the cancer at 8 a.m., on Friday, July 2nd in his home. 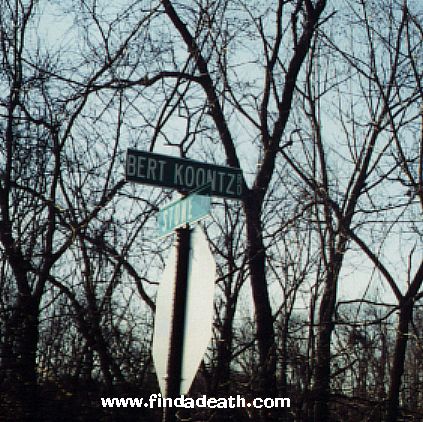 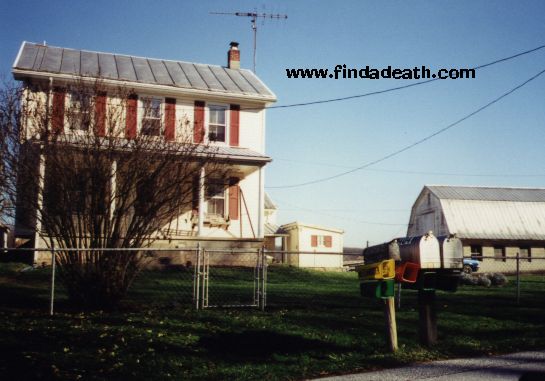 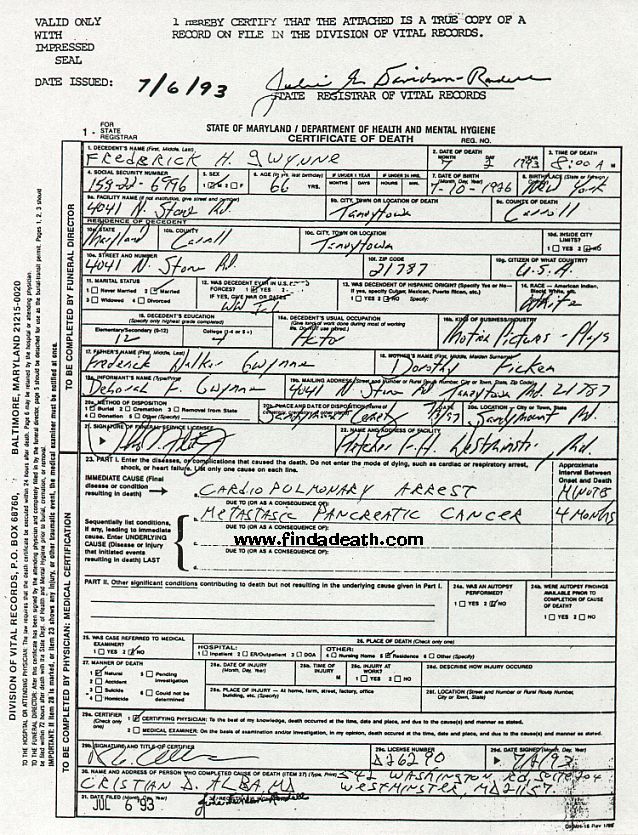 His body was taken to the Fletcher Funeral Home in nearby Westminster. 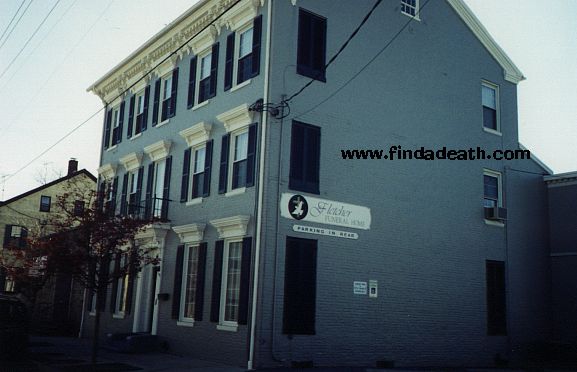 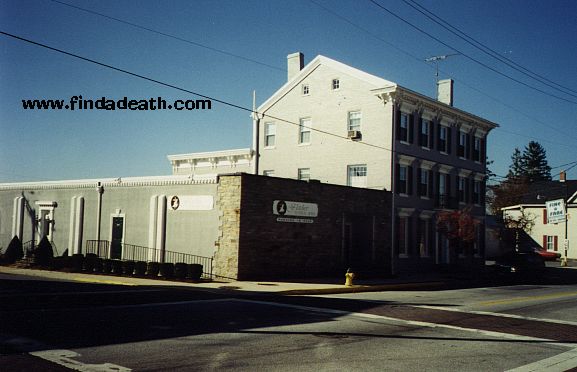 The next day, July 3rd, Fred was taken to the Sandymount Methodist Church for a brief service. The funeral was private, probably only attended by his wife and kids. Afterwards, he was buried in an unmarked grave. 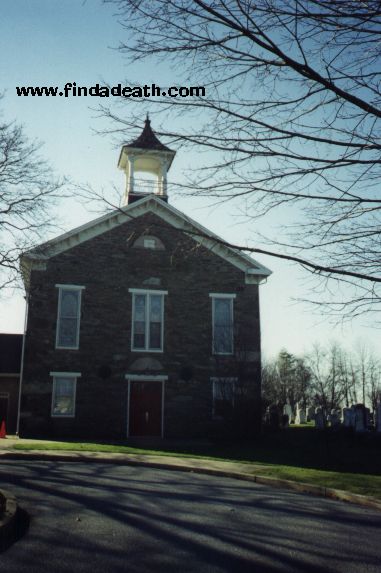 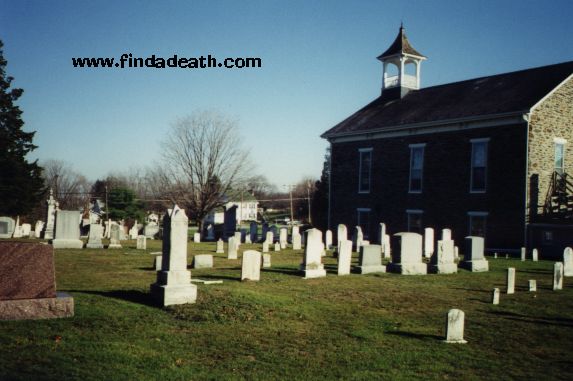 The thieves apparently didn’t realize Munster was a fictional TV
character and dutifully offered to sell Munster’s personal details —
accurately listing his home address from the television series as 1313
Mocking Bird Lane — and what appeared to be his MasterCard number.
Munster’s birth date was listed as Aug. 15, 1964, suspiciously close
to the TV series’ original air date in September 1964.

CardCops Inc., the Malibu, Calif., Internet security company that
quietly recorded details of the illicit but wayward transaction,
surmised that a Munsters fan knowledgeable about the show deliberately
provided the bogus data.

Clements said evidence indicates the thief, known online as “Supra,”
was operating overseas. “They really stumble over our culture. He’s
probably not watching any reruns of `The Munsters’ on TV Land.”

Insane couple build the Munsters house! I envy them. How cool are they?
Thanks Kim

As for the rest of the cast:

Yvonne DeCarlo portrayed Lily Munster. I really don’t know much about what she has been up to. There was that dreadful new Munsters “grouping” for television, and she showed up in that. I do have a funny story about a guy I know calling Yvonne late one night, pretending to be Carol Channing. I guess that really doesn’t count. He had her fooled though. Thanks to Ronnie Couch for the following info: She reprised the role of Lily in “The Munsters’ Revenge,” a 1981 NBC made-for-TV movie. DeCarlo’s most recent film appearance was in “Oscar” (1991). In the past few years, she has made many television appearances and written her autobiography, YVONNE.

Yvonne has her own page. Click here to read about her death.

I have slept in just about every closet and coffin in the world, but this place gives me crosstophobia!
The struggle goes on. The victory is in the struggle, for me. And I accepted that a long time ago.
Every Friday I used to have about fifty, sixty kids who would wait for me on Sunset Boulevard and I’d take them all to dinner. All runaways.
I know who I am. I don’t have to brag. I know what I contributed. I know what I did. You think you can do it better? Hey, go right ahead. The stage is yours.
Understood what the struggle was about. My mother. Couldn’t read or write, but she had more sense than many a graduate from Harvard.
Oscar Wilde said the rich and the poor are equal – they can both sleep under the bridge. Right? Do they have a right? You’re damn right they have a right!
I’ve been in the struggle over seventy years – it doesn’t bother me I may not win.
There’s more to anybody. Just because you haven’t noticed it, that’s your problem, that’s not mine.
The ruling class is smarter than you, and they’re more creative. And if you forget that lesson, you go down the drain. Because if they weren’t, they wouldn’t be around as long as they have been and as strong as they have been.
As long as you gave it your best shot, even if in the opinion of others ‘you failed,’ you didn’t fail.
Show More Quotes
Show less

Al Lewis died in 2006, at the age of 82. Turns out he lied about his age for so many years, claiming he was OLDer. Wild old lunatic. RIP Grampa.

Pat Priest portrayed the most famous Marilyn Munster. What a groovy chick. She’s retired now and living on some farm in the middle of nowhere. She has got wise, and her son manages her autograph sessions now, and she makes a decent wage doing that. 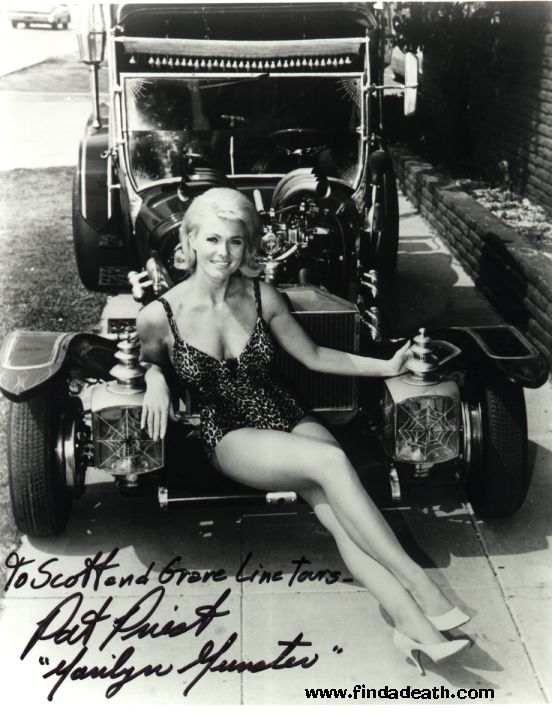 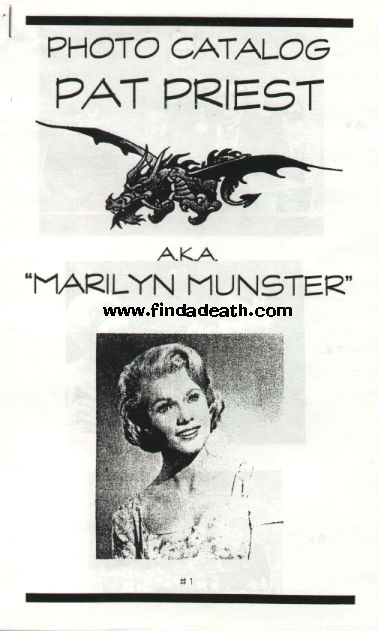 Butch Patrick… what a handful. He portrayed Eddie. He’s been in and out of so much trouble. In 1979, he was busted and did time, for having more than 200 quaaludes on him. My friend Bun and I had an opportunity to meet him on Halloween 1990. As you can see, he donned his Eddie garb. He was arrested a day or so later, for not paying a limo driver and hitting him because he kept getting lost. Can’t say I blame him. Butch, not the driver. Butch received a 30-month probation sentence for the mishap. He moved to Georgia. In 1996 – he was driving with a suspended license, and failed to yield, hitting a car. He got in to trouble. He’s a nice guy, but. 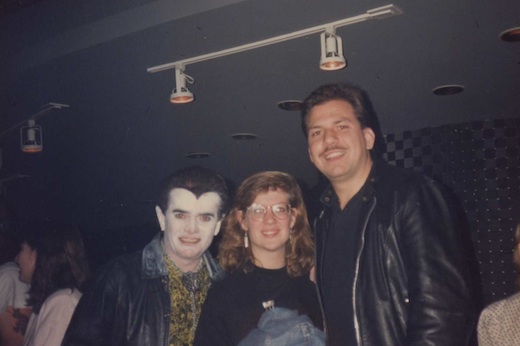 Trivia: Do you remember the episode where Eddie wins a trip to see his favourite TV idol, Zombo? Then he discovers that Zombo isn’t really a monster after all, and Eddie exposes the hoax. I love that one. An actor named Louis Nye played Zombo. I met Louie once, when I was hanging out with the Beverly Hillbillies (it’s a long story, and when I do a Nancy Kulp/Irene Ryan story, I’ll fill you in.). Anyway, here’s Louie. A very nice man. 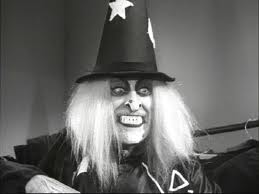 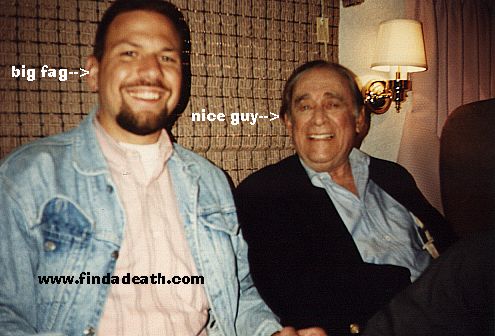 And just so you don’t go away thinking you haven’t learned anything useful, here is an historical marker from outside the church. Read. Learn. 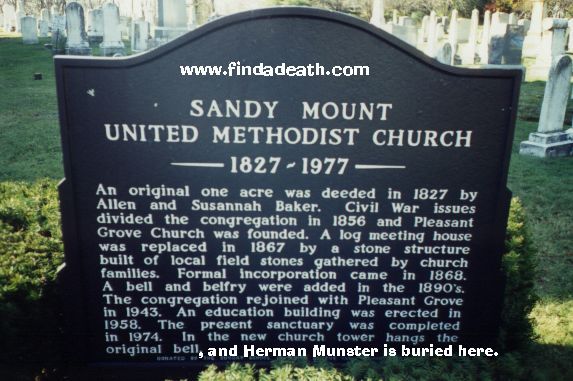 And there are The Munsters. Thank you again, Rob and Greg. Anyone have anything to add? Please feel free to get in touch!

In 1980, NBC was thinking to themselves, “Hey, let’s make a Munsters TV movie. If it is successful, maybe another series!” They wanted to bring back Fred Gwynne, Yvonne De Carlo, and Al Lewis, all from the original series. I suppose they didn’t want it to be a
“The Munsters have grown-up, with Eddie and Marilyn married”, so they decided to get a young Eddie again, and a college-aged Marilyn.

When they called up Gwynne, he of course was still trying to live down his Herman Munster image. His wife told him to name some astronomical figure for the part, so that perhaps, if he was going to play Herman, he was going to get paid! The producers accepted! Fred was promised his original make-up artist from the TV show as well. They felt like it was old times on set, but sadly the movie didn’t hit it off, when it aired in February of 1981.

Gwynne once confessed that as hard as he tried, he couldn’t ever hate Herman Munster.

This is an old postcard from the Universal Studios Tour. I want to do this tour. This exact tour. In the 60’s. Take me back! 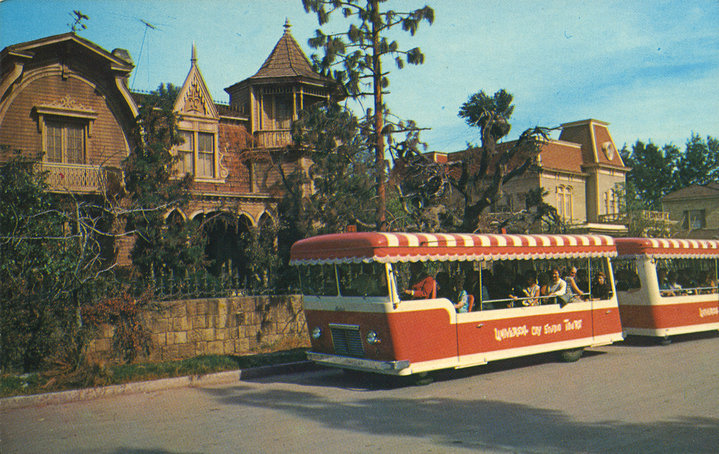 One of Herman’s and Eddie’s costumes are on display at an antique store in Southern California. 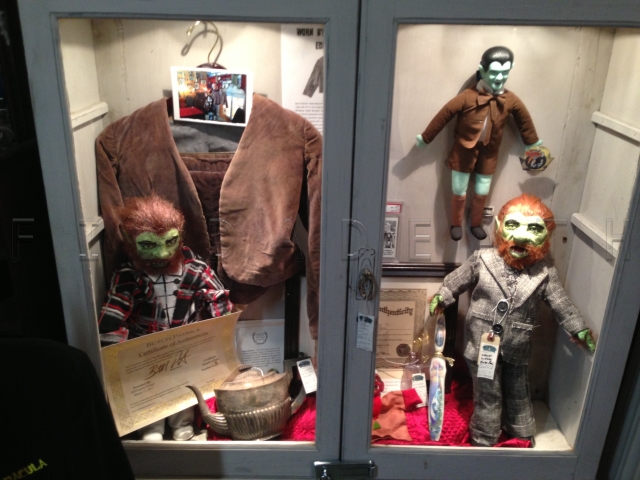 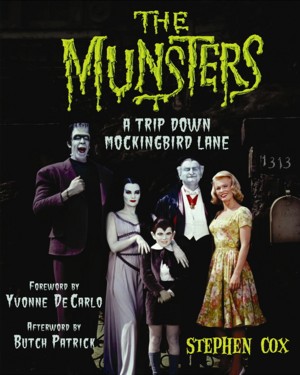 I owe a sincere debt of gratitude to two brand new friends of Findadeath.com, Rob Hoehn and Greg Williams. These guys took part of their Thanksgiving weekend, to brave the sticks to take photographs for this story. Thank you so much guys. 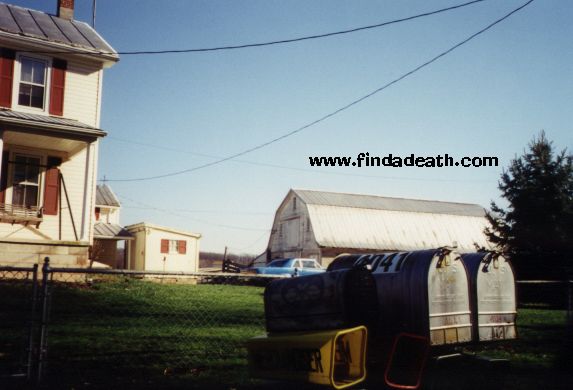 2 thoughts on “Fred Gwynne & The Munsters”