I’m going into the kitchen and see to it that the cheese dip doesn’t crawl out of the dish.

Lily rocked. She was born Margaret Yvonne Middleton in Vancouver in 1922 and will forever be remembered as Lily from one of the greatest television shows of the 60’s, The Munsters, which only ran for 2 years. 2 years. Yvonne had a long career before that, appearing in loads of projects such as The Ten Commandments and Salome, but she pretty much defined the term B actress. She could have been A.  But she didn’t. She made an amazing B.  How hot was she?!  Nice too. I wrote her a fan letter and she sent me the photograph above. 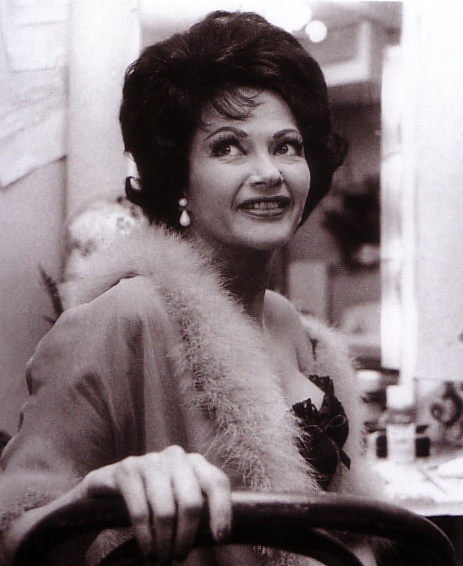 Off screen she had a very interesting love life. Flings with Howard Hughes, Burt Lancaster, Robert Stack, Billy Wilder, and Aly Kahn were among her many trysts. You can read more about Yvonne in her autobiography, and on the IMDB.

By the way, I just watched a film that Yvonne did in 1987 called American Gothic.  Young people get stranded on an island of homicidal maniacs.  Those kids got everything they deserved. RUDE.

Yvonne was married once to a stunt man named Robert Morgan, and had two sons named Michael and Bruce.  During a stunt gone wrong while working on How The West Was Won, Bruce lost a leg and was facially disfigured.  According to some sources, this is why Yvonne took the role of Lily Munster and became one the the coolest TV moms ever.

Lily Munster:  [slightly annoyed] What is so funny?
Herman Munster:   It’s this joke book. Listen to this one, Lily, It’ll kill ya.
Lily Munster:  Well, it’s a little late for that, but go ahead.

Yvonne’s mother and son Michael died in 1997, and Yvonne suffered a stroke the following year. According to an interview, her surviving son Bruce claims that Michael’s death was ruled natural officially, but he himself thinks he may have been done in by “a drug dealer living in a half way house where he was recovering from alcoholism.”

At the end of her life, Yvonne was living in the Motion Picture & Television Hospital in Woodland Hills, Ca.  She was in such poor health, she was placed in long term hospital care. 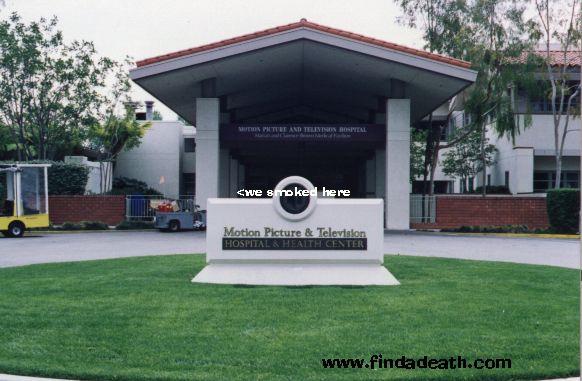 Son Bruce was apparently with Yvonne when she died.  In her final moments, according to Bruce, Yvonne looked to him and said, “What’s happening to me?” He told her to go to the light. She replied, “Okay, I am” and died.  Notice gangrene is mentioned on the death certificate.  Youch. 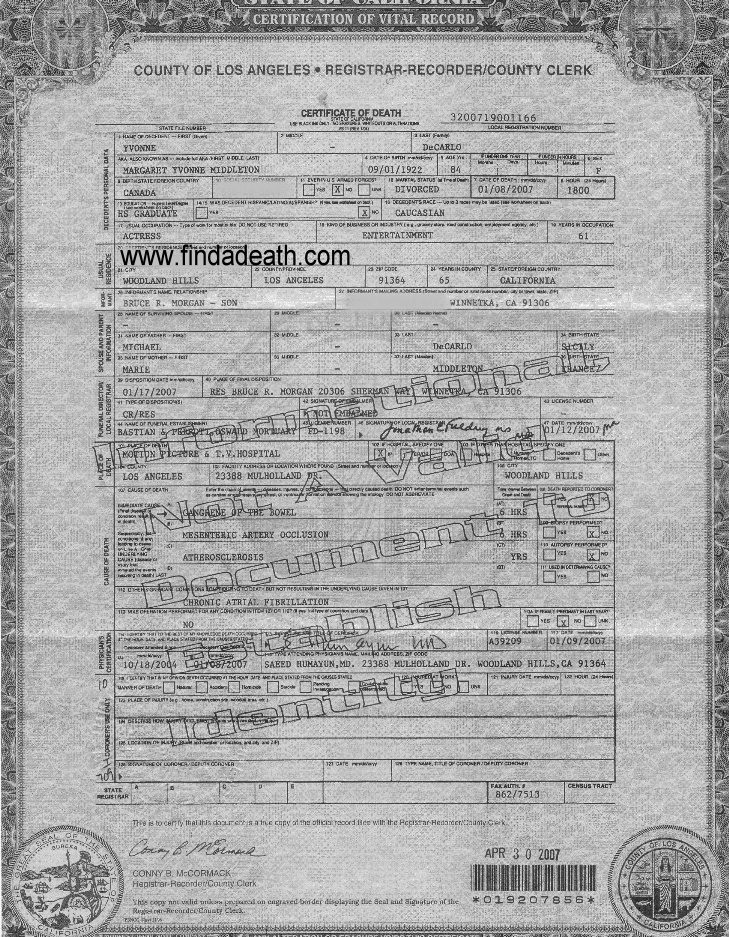 Honorary Mayor of Hollywood Johnny Grant — who himself would be dead a year and two days later — had flowers placed on one of Yvonne’s two stars on the Hollywood Walk of Fame. 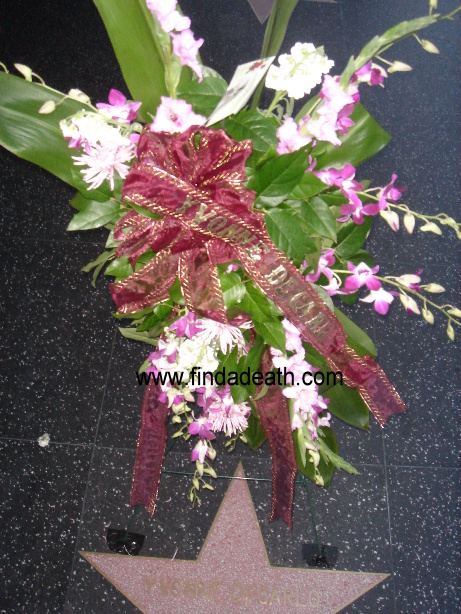 A memorial service was held on the 20th of January in the Louis B. Mayer theater on the campus.  My friend Vendredi braved the self important security guards to photograph the theater (with a bust of the man himself in front) for me. 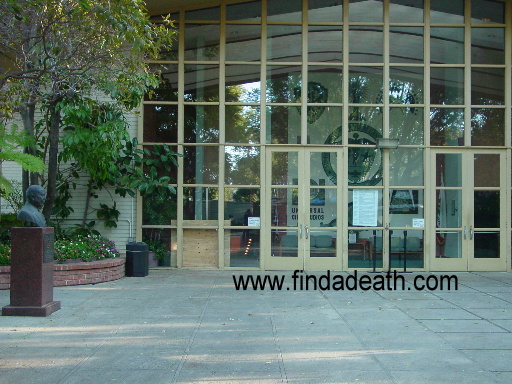 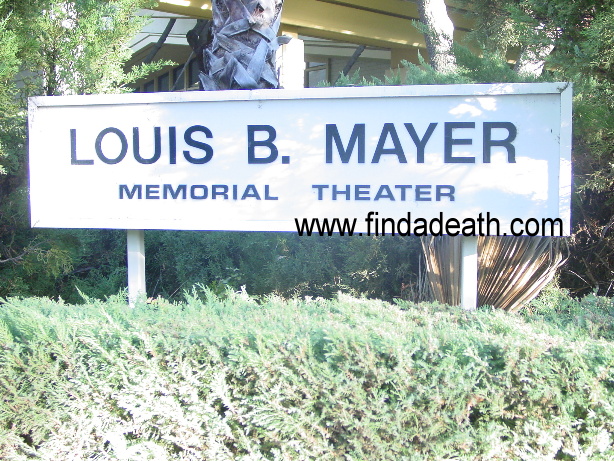 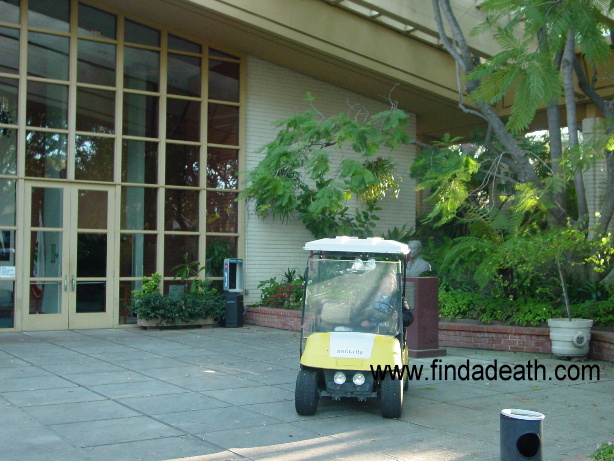 Afterward there was a reception in the Country House, hosted by her son Bruce. They showed old clips and movies from Yvonne’s career. Vendredi approached Bruce and asked if there were burial plans for Yvonne.  He mentioned trying to raise the money to have her cremains scattered in her birthplace in Vancouver.  According to his Myspace page, he changed his mind and wanted her here in a “famous Hollywood cemetery” probably meaning Hollywood Forever, though I think he’s changed his mind again.  He also hawks Yvonne’s old stuff at autograph shows.  I wouldn’t mind having a little piece of Yvonne’s history.  I do hope she ends up at Hollywood Forever, though.  I’d love to have her as my forever neighbor. 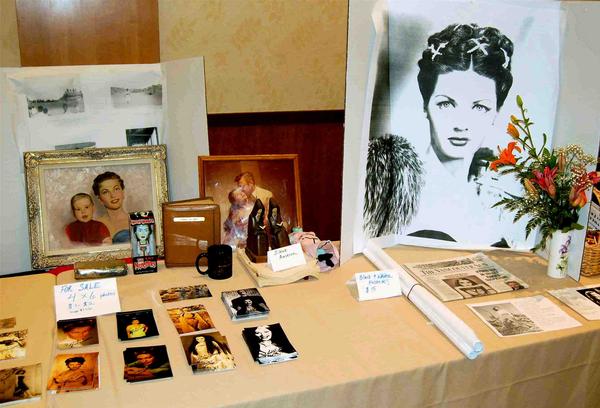 Marilyn Munster:  Why all the formality, Aunt Lily? It almost seems like the reading of a will…
Lily Munster:   I’m afraid it’s not that happy an occasion.

A couple of years ago, I was passing George Barris’ shop in North Hollywood and decided to stop in and have a peek.  Super nice people, I asked them if they had the Munster Koach, as I heard.  They said yes, and invited me back to have a look.  This is the way it looked during the run of the show, and this is me sitting in it.  Laugh, I thought I’d die. 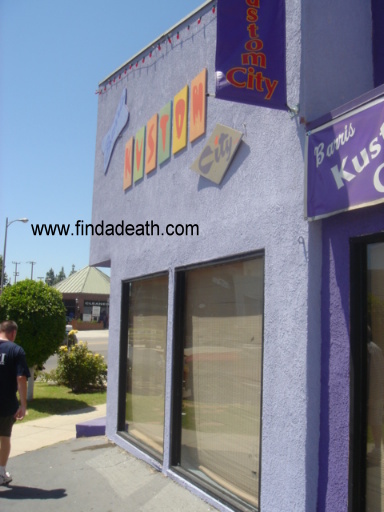 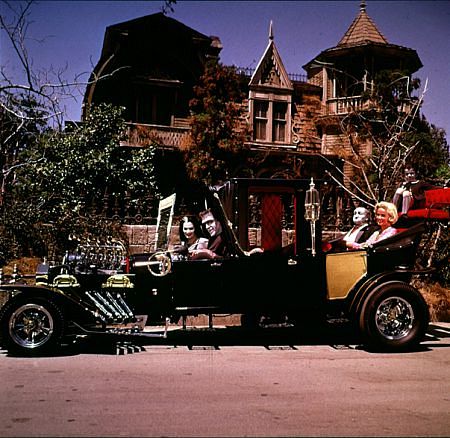 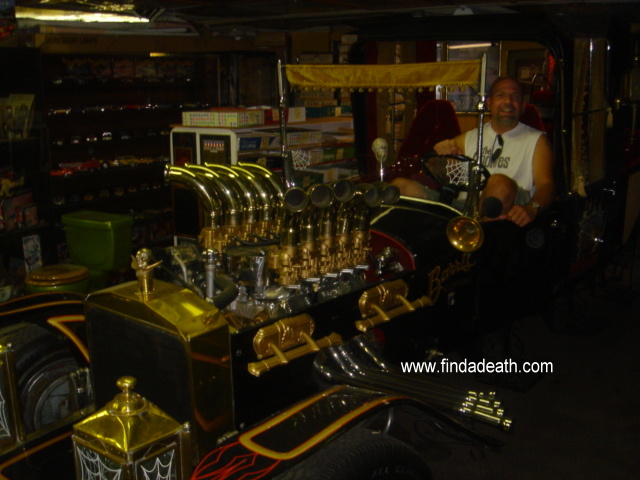 Things you might not know:  Yvonne sang opera and really did play the harp.

The Munsters home on the Universal backlot was the home of the gay couple on Desperate Housewives.

Heres a shot I found somewhere online of The Munsters at Marineland. 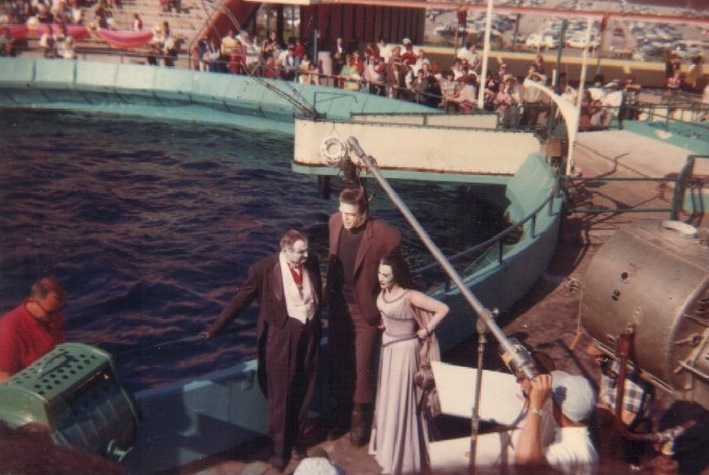 Yvonne worked as a showgirl at the Florentine Gardens where Marilyn Monroe had her first wedding reception. 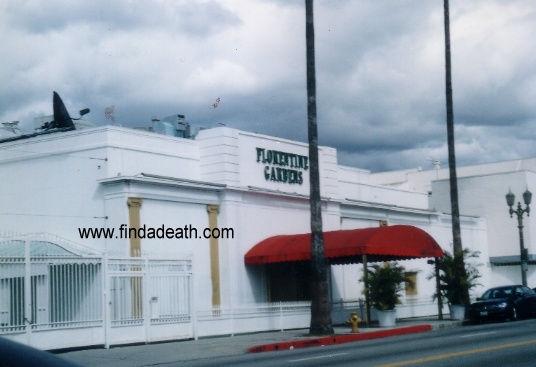 Thanks Vendredi and Kevin Hassell for your help.

I will leave you with one of my favorite Munsters moments – Grampa and Lily enter a posh country club, genuine hilarity ensues.

Death Hag Johnny on the Find a Death Forum sends this:

Tony Curtis tells a funny story about Yvonne:
“When I left the Navy, I used the GI Bill to get into the Dramatic Workshop, which was located at the President Theatre on Forty-eighth Street. Walter Matthau and Harry Belafonte were students there, too. We were all just trying to make it. Later on, I went out to California, and good things started happening for me. When I came back to New York to do a promotion for City Across the River, they gave me a suite at the Sherry-Netherland and a huge black limo. I took it around to show my buddies in the Bronx and then went by the Dramatic Workshop. It was a terrible, rainy afternoon, and who do I see out in front? Walter Matthau. He’s got a long, heavy coat on with a Racing Form sticking out of the pocket, and he’s looking down at the gutter. Here I am in this nice, warm limo. And there he is, this grumpy guy surrounded by a cold, miserable world. The look on his face says, “What’s ever going to happen for me? Nothin’!” So I tell the driver to pull alongside him and stop. Now Walter’s watching the limo. I roll the window down, look at him, and say, “I fucked Yvonne De Carlo!” Then I roll the window back up in a hurry and tell the driver to get the hell out of there.

No, no, no, he wasn’t mad! For years, Walter loved to tell that story at parties. He’d make it last twenty minutes.”

There is a house in Texas… a married couple built it… a replica of the Munsters’ home.  No shit.

Here’s the Story – Munster Mansion from Tracey Crooks on Vimeo.

Thanks David Scott for these great images – 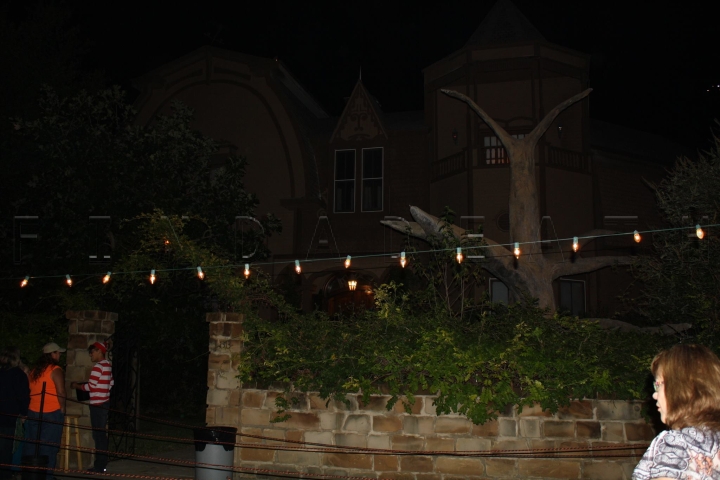 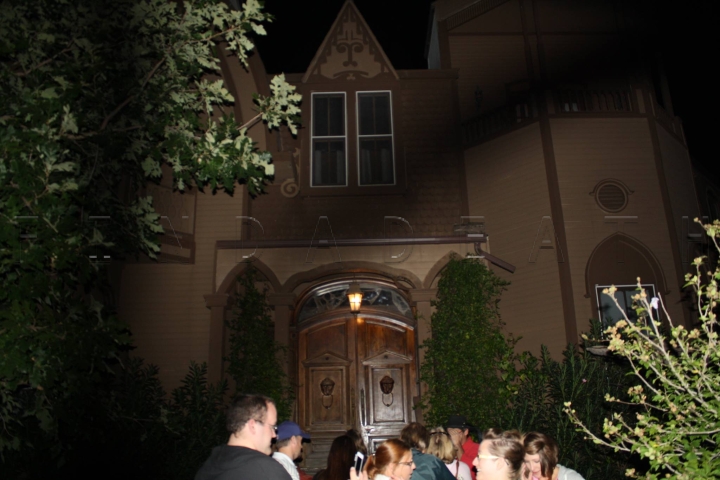 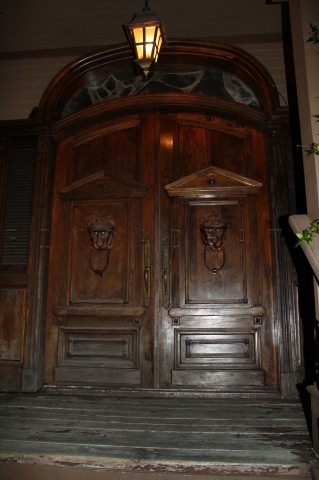 How about Fred Gwynne?