Now I won’t have to worry about the new series making it or not.

Landon was born Eugene Maurice Orowitz, in Forest Hills, NY, and made his film debut in 1957, in the film I Was A Teenage Werewolf. He played “Little Joe,” on the television show Bonanza for 14 years, and made a new generation of fans in that Shannen Doherty vehicle Little House on the Prairie, also known as the poor man’s The Waltons. There was also that show Highway to Heaven, which was pretty popular as well, but I hated it.

On Friday, April 5th, 1991, Landon was hospitalized at Cedars Sinai Medical Center, (thank you Terri Rios) for what was thought to be an ulcer. 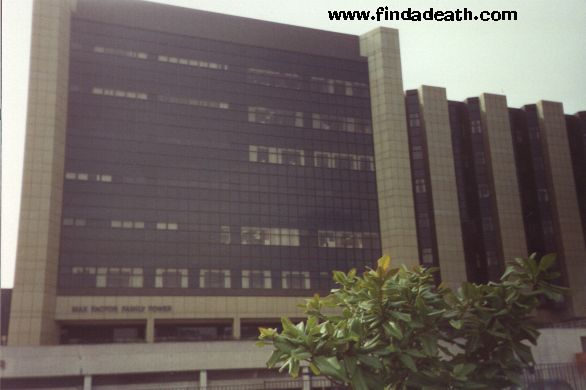 He was given the news that they discovered tumors in both his liver and pancreas. From what I can gather, Landon had been known to overindulge in alcohol and cigarettes. Having only a 3 to 5 percent chance of survival, his publicist Harry Flynn released the statement, “Michael said he is going to beat it.”

Landon returned to his $7 million home on Bonsall Drive, in Malibu, and went under extensive treatments in the following months, including chemotherapy, holistic medicine and even coffee enemas. 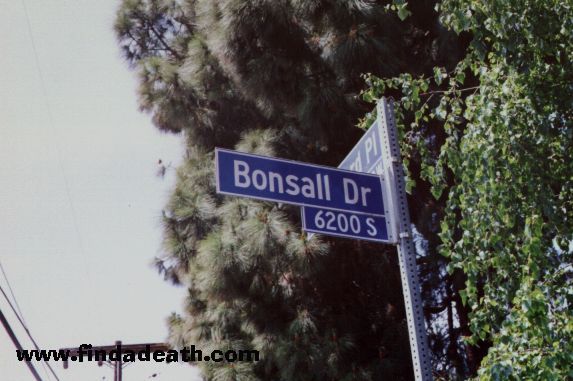 On May 8th, he made his final public appearance on The Tonight Show, with his old buddy, Johnny Carson.

Fans turned the outside of their home at number 5920, into chaos. 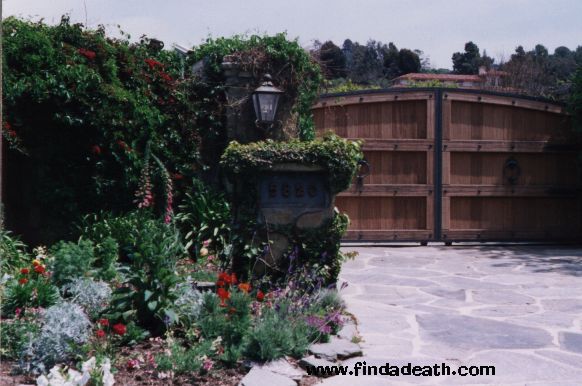 They were staging some sort of vigil in the road in front of the gates, tacking messages to the gate. 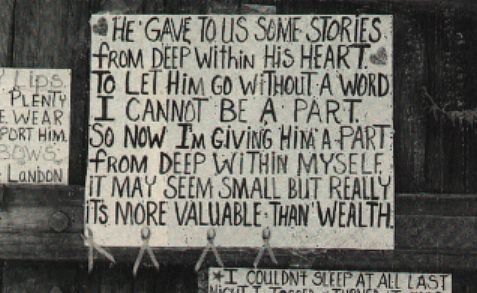 Why must people insist upon writing messages and posting them like that? Why? Take pictures, don’t leave shit. Like he’s gonna read it.

Gone is my moral high ground, here is the best photo I could get of the house, courtesy of my pal Larry, who I begged to stand up in the car and take it. 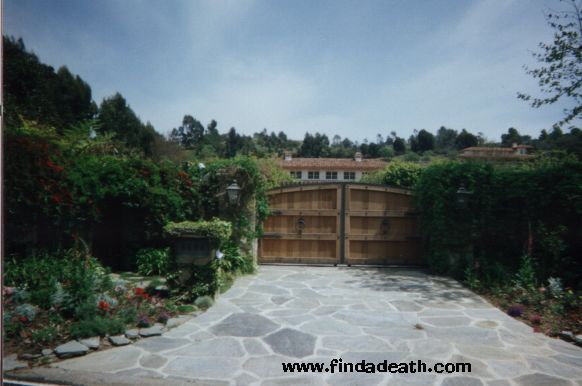 Pathetic, I know, but here we are, aren’t we? To compound the excitement, here is a photo of the service entrance. 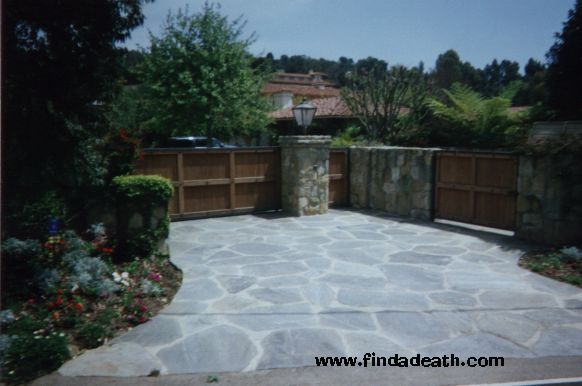 On July 1st, Landon realized the end was very near, (like thisnear) and asked his 34-year-old wife Cindy to bring all 9 kids (he was a member of the Mel Gibson procreation society) (Okay, some were adopted) into the bedroom. “I love you all very much, but would you all go downstairs and give me some time with Cindy.” She was the only one with him when he closed his eyes, and died a few minutes later. It was 1:10 p.m., and he was 54 years old. 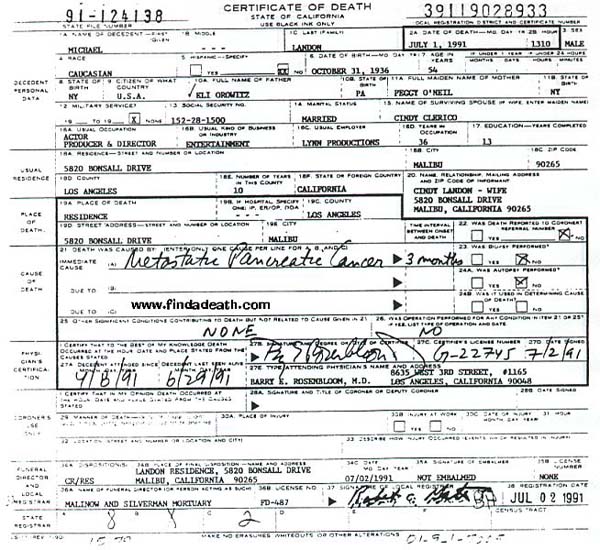 Upon the news of his death, the Hollywood Chamber of Commerce placed a wreath on his star on Hollywood’s Walk of Fame. 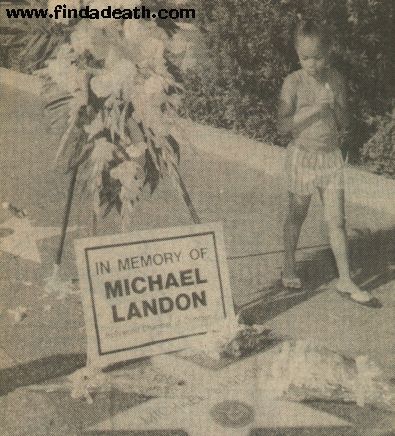 Landon was cremated on the 2nd of July, and on the 5th, there was a memorial service for him at Hillside Memorial Park. The theme from Little House on the Prairie was played on loudspeakers, while 500 guests jammed the chapel. Guests included Ronald and Nancy Reagan, Ernest Borgnine, Brian Keith, Merlin Olsen, Melissa Gilbert, and Melissa Sue Anderson. His wife Cindy brought along the white box containing his ashes to the service, and afterwards, his ashes were buried in the family plot.

Trivia: Landon is buried about 50 yards from his Bonanza co-star, Lorne Greene.

More: I saw a talk show a while back, featuring one of Landon’s daughters. She claimed that Michael talks to her from the beyond, and tells her what to do with his money. Charitable contributions, etc. Though I don’t necessarily disbelieve these stories, the impression I got was that she should invest in long term accommodation at the HooHoo Hotel.

Michael Landon was born and raised in Collingswood, New Jersey, and attended Collingswood high school there.  He was the spokesperson for W.A.R., Women Against Rape, which is based there. Joan McKenna is the head of this national group. There is a memorial set up in a local park to honor him, near the home where he grew up.

Hi Scott – I emailed you (in 6/2000) with a half-promise to send along pix of the Winter Dance Party, which my friend had participated in. I’m sorry that I never reported back to you the fact that my ex-employer had deleted all the photos, some of which I know you would have been interested in.

This is a recollection of an anecdote my father told me, when he was on a TV show called “Michigan Outdoors” (I’m sure you might remember Mort Neff – my pop was Dick Black, and covered the west side of the state).  He, Mort, and Howard Shelley all were at a celebration regarding the Mackinac Bridge; also attending were Michael Landon, Lorne Greene, and Dan Blocker.  The shows had a mutual sponsor, namely Chevrolet.  I believe the agency was involved in this event – Campbell-Ewald.

The story is set in a bar in St. Ignace, where they were introduced to each other, and the core of it was the joviality of all three, especially Dan, but the humorous part is the name which Michael used when addressing Lorne: “Dada”…

Hope that’s interesting and useful.  Keep up the good work on your site, which I’ve spent WAY too much time on lately.

Thanks for the info, Don!

Howdy again Scott,  This is Carmen of Wylie, TX with some info that could unfurl into some good “jawing” as we say down here.

When I was in LA 87-91, I had a client whose husband was best friends with Landon. Their children had guest appearances all the time on the “Prairie” show to boost their income, so naturally it behooved her to say he was an angel. Anyhoo – she said Landon was a fantastic friend, and helped a lot of people out who were not as wealthy as he was, but I became to know the other more money grubbing side which I’ll get to.

I also knew Melissa Sue in ’90 when she was a make-up artist at the Lancome’ counter at Topanga Canyon Mall. She and another cast member clued me in on the fact that the crew had A LOT of medical problems that were believed to be caused by the land that they filmed on, which Landon bought very cheap because it was right next to Rocketdyne in Simi Valley, (LA’ers call it “Slimy Valley), which produced lots of weaponry that has always been toxic. Anyway, if you can get the scoop on the demise of the cast most likely they are all on their last leg. Melissa was very nice and I knew her boyfriend, a rocker at that time, and I felt sorry for all those people who worked on such dangerous property which Landon knew full well the details.  Yes, he could have been a drinker and smoker, but he sure was young to have all those tumors. I am pretty sure the remaining cast members have serious health issues today. Thanks and I LOVE your site!

Thanks for the info, Carmen!

I was one of those in vigil at Michael Landon’s gate. I deeply regret it now, but at the time I wanted to test it, and see if prolonged and intense prayer would help to heal this man who brought so much good into the world through entertainment.  I was doing “a good thing” to bring help down from God for him. I was there all day at his gate and slept in my car three days or so.  I never spoke or intruded in any other way, but prayed there by the gate.  I thought it was worth a try.  I’d never done anything like that before.  Michael’s kids and friends and actors on the shows were nice to me and one waved to me on the coast highway.

As fate had it, my car broke down the day I was leaving, and his wife Cindy Landon was driving by and stopped and called me by name, and was very very nice to me. She acted as though she was glad I was there, but might have just been polite. She gave me a lift in her Mercedes and offered to repair my car, and I declined the offer, not wanting to be any burden to her life. I found alternate help and had the the care towed, but before I left, Cindy sent out a box of lunch for me and a $50 bill that her servant said would go bad for me to turn down. That’s a pretty class act.

Thanks for the info, Tim!