For three days after death, hair and fingernails continue to grow…  but phone calls taper off.

“And now, heeeeeeeeeere’s Johnny!”  For 29 years at 11:30 PM on Channel 4, people heard that from Ed McMahon. After taking over from Jack Paar, Carson would host The Tonight Show with Ed McMahon from October of 1962, until he retired on May 22, 1992. 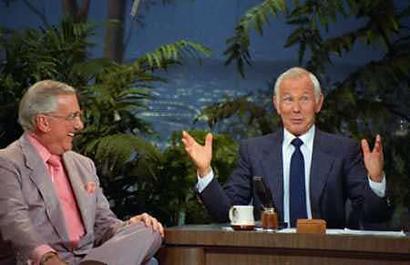 Other than appearances on Late Show with David Letterman and The Simpsons,  he pretty much disappeared from the public, spending most of his time in his 12 million dollar Malibu Home, 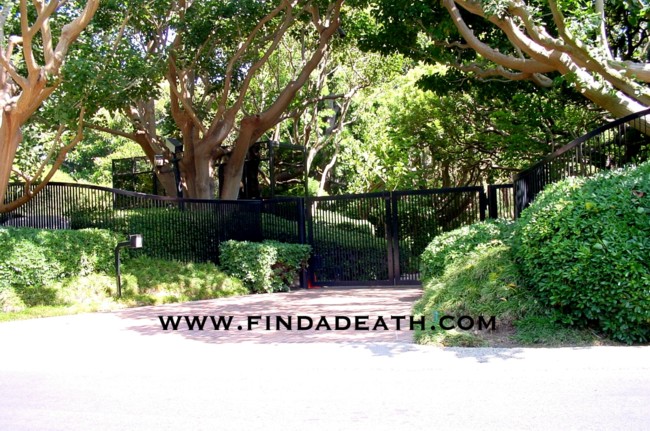 and on his 130 foot yacht, the Serengeti.

Carson recorded the Tonight Show at NBC in Burbank, 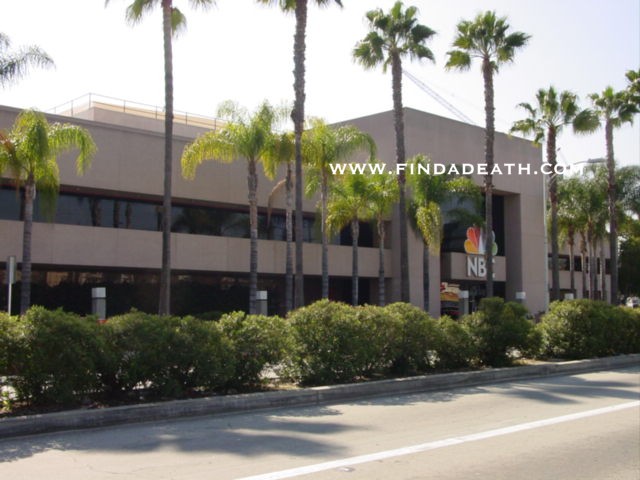 where they now make the Ellen show, 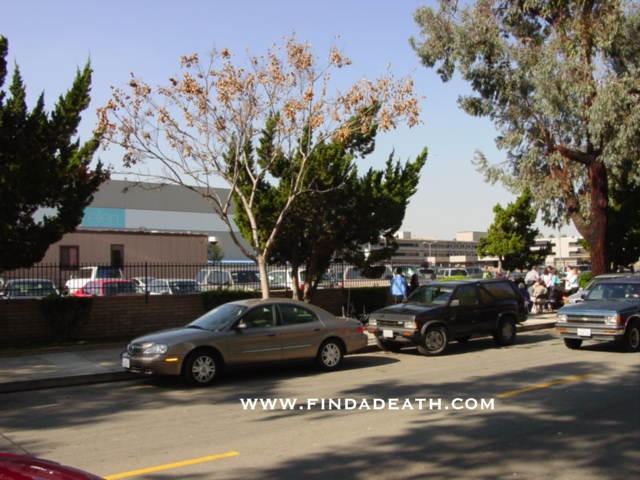 and loads of other shows.  Across the street from NBC is the Johnny Carson park, 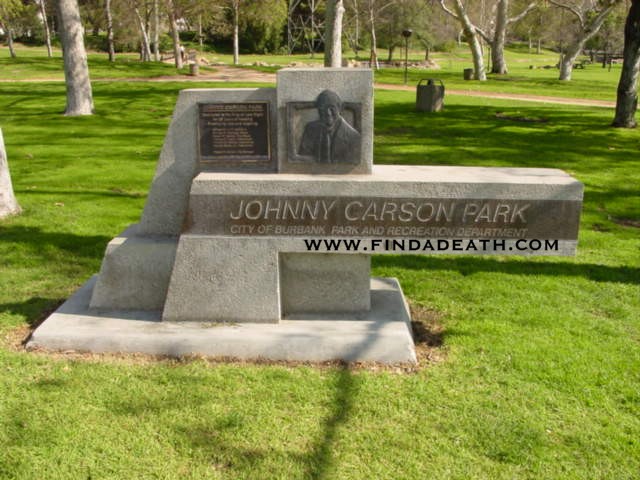 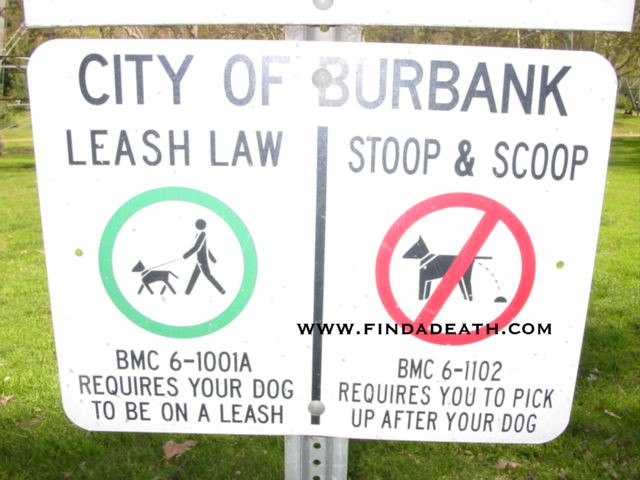 As always, there is lots of information on Mr. C elsewhere.

October 06 – My pal Alan Light sends in this video – of Carson’s last appearance on television – a brief cameo on David Letterman.  I just watched it, and its hard not to get a bit choked up.  Bless him.  Like Joan Rivers said, “Carson IS America.”

The King of Late Night had undergone quadruple heart bypass surgery in March of 1999, after suffering a heart attack, and announced that he had emphysema in 2002. After that, he spent most of his time on the Serengeti. He also met once a week to play poker, with Chevy Chase, Steve Martin, Carl Reiner, and Neil Simon.

According to his nephew in TV Guide last year, he was no longer able to play tennis, his favorite pastime, because of his emphysema. Carson and his fourth wife, Alexis, lived in Malibu.

On January 4th, 2005, a picture of him was published in the New York Post, that was taken when he was going into a movie theater to see The Aviator. It would be one of the last pictures ever taken of him in public.

On the 5th of January, Johnny was hospitalized at Cedars for breathing difficulties, but upon stabilization he insisted upon returning home. He was re hospitalized on the 16th, and on the 21st transferred to Intensive Care. According to one report, when Johnny learned that his prognosis was dim, he himself opted to have his life support removed.

On January 23rd, he died at 6:50 AM, surrounded by his sons Christopher and Corey, and his wife Alexis. Cause of death: respiratory failure from emphysema, brought on by the fact that he was a smoker for most of his life. In the early days of the Tonight Show, he could often be spotted hiding a cigarette behind his desk. He reportedly quit for good about ten years ago. He was 79 years old. 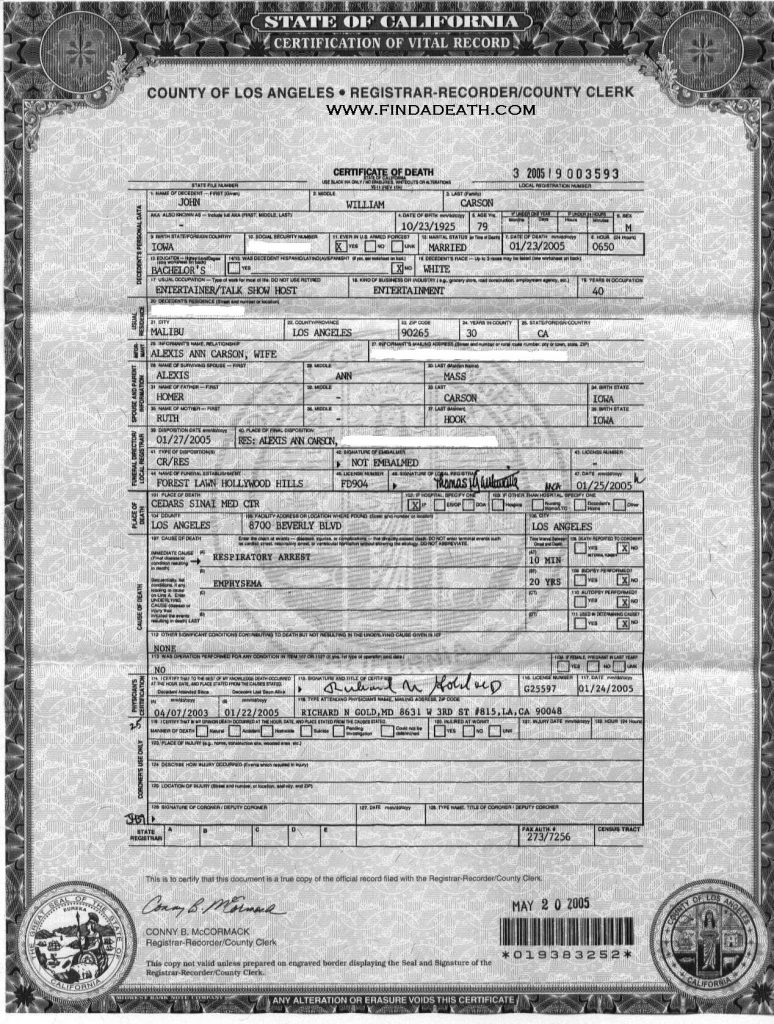 Upon hearing of his passing, David Letterman issued this statement: “It is a sad day for his family and for the country, he was the best — a star and a gentleman.” The Laugh Factory did their obligatory sign. 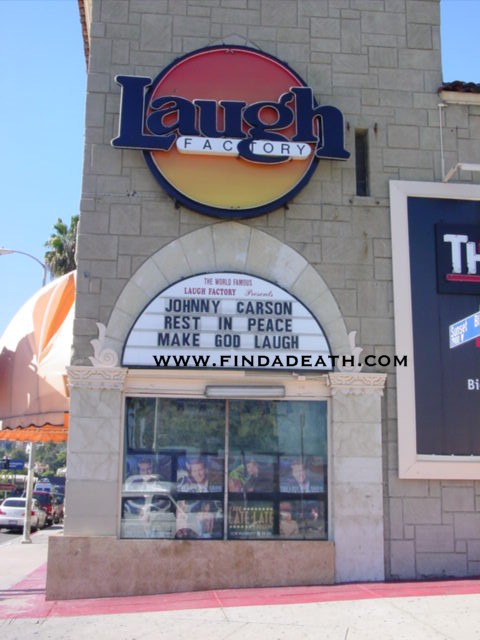 Before Carson died, it was revealed that he had been sending jokes to Letterman, for use in his monologues on the Late Show. On January 24th, on the Tonight Show, Jay Leno marked his passing with Ed McMahon, Bob Newhart, and Don Rickles reminiscing about Johnny. A week later, on the Late Show, David Letterman did a monologue composed entirely of jokes sent by Carson.

No funeral services were held, and Carson was cremated, with his ashes going to his family.

Upon hearing of his death, the Honorary Mayor of Hollywood, Johnny Grant showed up for the cameras to put flowers on Johnny’s star on the Walk of Fame. 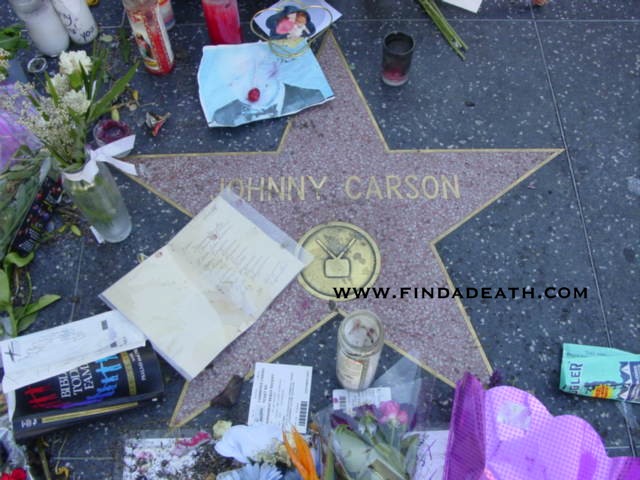 “I know if Johnny Carson could somehow magically show up here and now, his remark would be, ‘What are you doing?’ because he was such a private person.  “But I invite everybody around this part of the country to come here, place flowers.  We’ll take care of them, and give the guy a great sendoff.”  Grant also added, “I will start this very day to find a square or a street corner or something to be designated ‘Johnny Carson Way’ or something like that.”

There is a lot of information with regards to the feud between Leno and Letterman, which you can research elsewhere, the same for the Carson and Joan Rivers incident.

Trivia: His son Rick was killed in an automobile accident in 1991.  Apparently while taking photographs from a moving vehicle, he drove off a cliff. Whoops.

He was a close friend of Michael Landon. When Landon made his final television appearance ever, on the Tonight Show, he revealed that he had daily coffee enemas to relieve the intestinal pain due to his cancer treatment.  The episode drew huge ratings, and Landon died a few weeks later.

He was also good friends with Jimmy Stewart.

He was once a writer for Red Skelton.

EVEN in death, Rodney Dangerfield gets no respect. The late comedy legend’s longtime publicist, Kevin Sasaki, got a call from a booker at CNN last week asking him if “Rodney would be available to share his comments on the passing and legacy of Johnny Carson.” Sasaki replied that unless CNN had a new way of linking up to the afterlife via satellite, that would be impossible. Dangerfield, of course, passed away last October. Ironically, his new DVD set, “Rodney Dangerfield – The Ultimate No Respect Collection,” was posthumously released last month, and includes clips culled from his more than 70 appearances on “The Tonight Show.”

He started out as a magician when he was fourteen years old, called the Great Carsoni.

He was almost cast as Rob Petrie on the Dick Van Dyke Show.

He hosted 4,531 episodes of the Tonight Show.

His final appearance on the Tonight Show drew 50 million viewers.

In his will, Johnny bequeathed 1 million to the Carson Center for Chimps in his home state of Nebraska, and also gave money to a man that debunks people claiming to be psychics, and Planned Parenthood.

Thanks to Kevin Hassell our buddy, for le story, and Kyle Goodman for the snaps of Johnny’s Malibu home.