You know it was a very complicated plot for an Abbott and Costello picture. We had two women — one was the heroine and one was a villain. And nobody could figure out why these two beautiful women were after Costello. (on Abbot and Costello Meet Frankenstein)

Some things are just so bizarre that you couldn’t make them up. George Michael being busted in the men’s room of the Will (“I never met a man I didn’t like”) Rogers Memorial Park, Catwoman and Bluto’s brother fighting over their picky property issues…  but THIS… is just stunning.

On Sunday June 13, 2004, sometime before 11a.m., Keven Graff entered the home of 91 year old Robert Lees.  Lees was a screenwriter that was a blacklisted screenwriter that wrote for Alfred Hitchcock Presents, Abbott and Costello movies, and Land of the Giants.

Now.  Imagine doing all those things, surviving being blacklisted, having a wife die of cancer, making it to NINETY ONE, and having a homeless-meth-addict-on-ecstasy-former-go-go-boy from-Huntington-Beach  break in to your house, cut off your head, throw a blanket over you and leave. 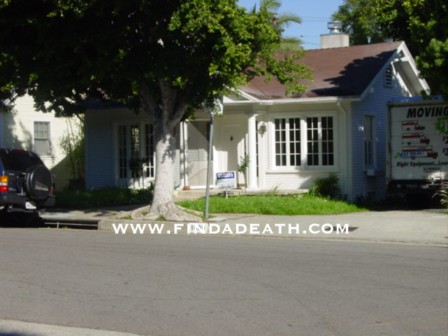 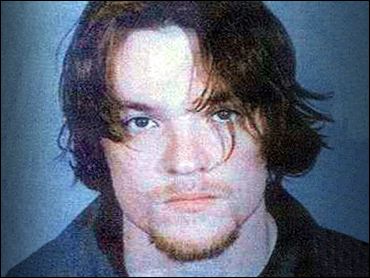 He hopped the back fence, 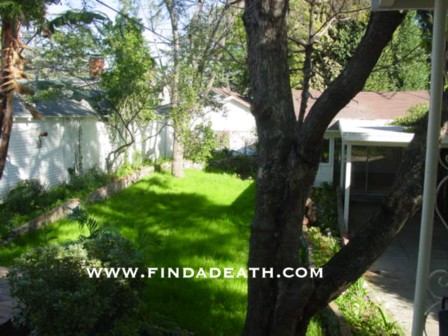 head in hand, and paid a house call to retired doctor Morley Engleson who was on the phone to Southwest Airlines, making a reservation to San Jose. 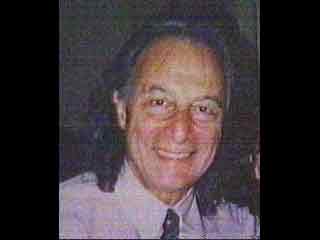 The reservation attendant hears Engleson being butchered to death, and wisely (big snaps) calls the cops. Graff however, boogies in Engleson’s 2001 Mercedes.

Police arrive, and see Engleson through the window, and force their way in. 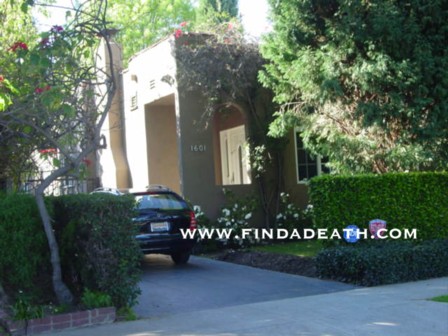 Engleson was found by the front door, pants around his ankles, dick chopped off.  He also had a fire place poker in his throat and a huge slice in his side. While searching the place, they found Lees’ head (whoa) placed very carefully on the crisp clean white bed sheets.  Lees’ head also had star belt buckle in his mouth.  It was several hours later that they found the rest of Lees. Lees’ girlfriend arrived that afternoon to pick him up, and after no answer, she peeked in the window and saw Lees’ body on the bedroom floor, covered with Mr. Blanky.

The Mercedes was found a few hours later as well, where Graff was staying, around 3rd and LaBrea.  He also ditched a pair of shoes he was wearing, in a garbage dumpster.

It gets more bizarre. The next day, go go boy Graff goes to Paramount Studios 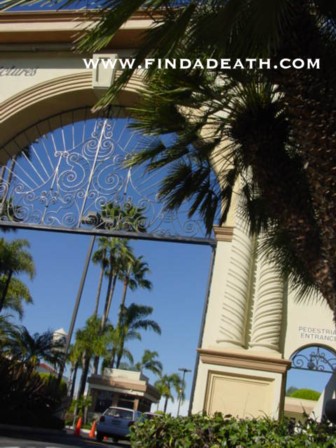 and asked the guards for the phone number of a female employee of the studio. 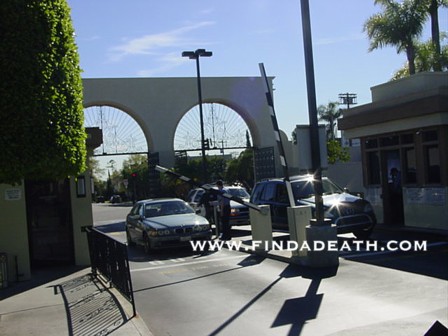 (I stopped by Paramount yesterday (4-11-05) to confirm this, and the guard I spoke to claimed that Graff was just being nuts, and wasn’t asking for anyone in particular.  He could have been lying.  I don’t know.) The guards tell him to get lost, as the Paramount Studios guards (rentacops) often do. Graff leaves. As he leaves, the guards notice strange behavior. He starts flipping off the cars driving by, and talking to himself. In truth, this behavior is not at all unusual in Los Angeles, but the guards keep an eye on him through the security cameras. 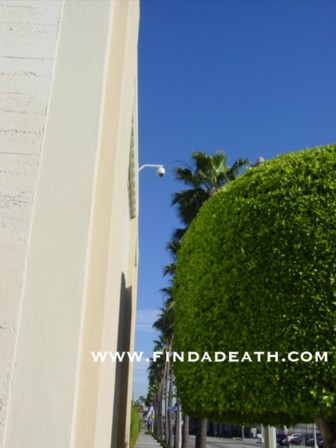 A few minutes later, the police air a news conference about the double homicide, and the Paramount guards are watching. They recognize the description of Graff, call the cops, and Graff is arrested on this wall, without incident. 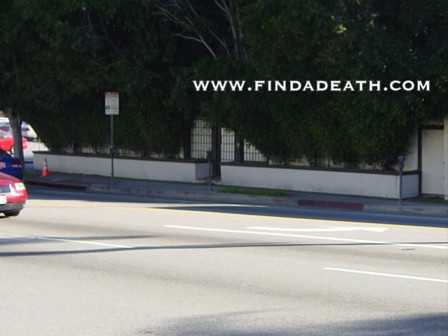 Keven Graff was a scab meat cutter during the grocery store strike we had last year. He was living in Huntington Beach, and is either military or ex military, claiming he wanted out of it but didn’t want a dishonorable discharge. 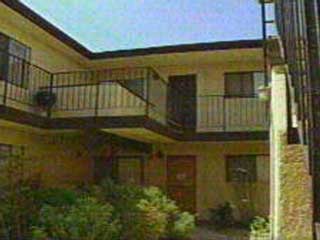 He stripped in gay bars, and had several gay friends, but apparently was only gay for pay, and really liked women. Keven also claims he doesn’t remember what happened. How can people remember how to drive a car and get to Paramount Studios to ask for a friend, yet forget how he got from point a to point b with a severed head?

Robert Lees was killed one month shy of his 92nd birthday. A memorial service for him was held on July 18, at the Writers Guild.  I have no idea what happened to the pieces of him, or the good doctor in the house behind. I’m also still clueless as to the motive, or how Graff became a suspect to begin with. The trial began last week, so we’ll see how this all pans out.

A few weeks ago, the house where Lees lived was still on the market, though in escrow. I happened to be biking past, and spoke to the nice people clearing out the show furniture, and asked very innocently if I could have a look. This is when it pays to never leave your house without a camera.

The real estate listing had the house going for $849,000.00 This is a dinky winky small ass bungalow with a guesthouse. The stat sheet had the dreaded words, “SEE AGENT REGARDING DISCLOSURE.” That means, by law, anything notorious that happened in the house has to be disclosed to the potential buyers. I would love to be a fly on the wall when that little tidbit is dropped. “Oh, and by the way, there is something you should know.”

California real estate law states (I can hear the yawns now): The sellers of a home must disclose any death in the property — other than from AIDS — that occurred within the past 3 years. So it’s not just scandalous or notorious deaths.

Most buyers do not care if it was a natural death, but most people have trouble if it were a murder or suicide. Furthermore, the more notorious the murder/suicide, the more adversely the property’s value is affected. Studies have shown, however, that after 10 years, normally the property will return to its regular market value.

OK, class is dismissed.  Thanks Harry!

So Graff either came in the front door, 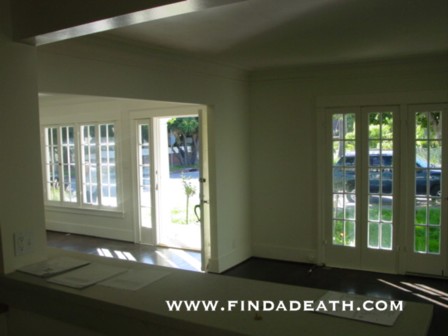 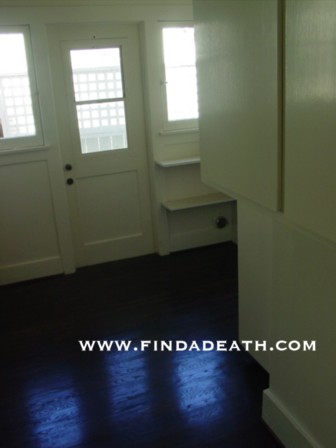 Lees teeny home had this bathroom, 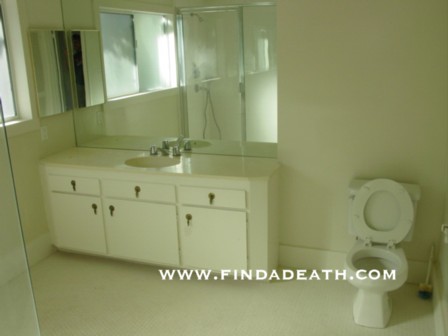 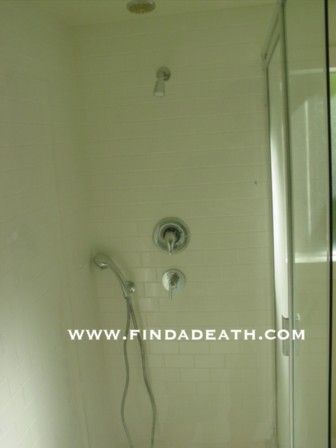 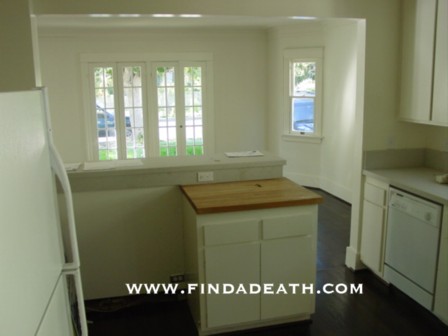 He was murdered in the bedroom. 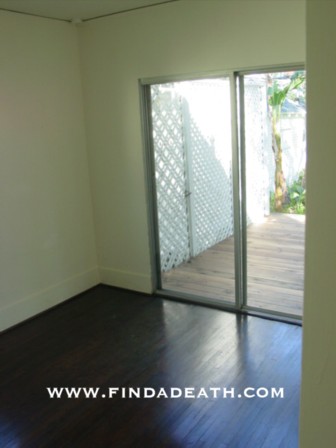 It was wild to be in the house, knowing what happened there.  I’d be really interested in the crime scene photographs.  Police describe it as one of the more gruesome scenes ever.  Well, you can’t say Graff didn’t leave an impression.

Thanks to my biking buddy Colin for showing me the murder houses, and Mike for the Paramount info.

Trivia: Sally Struthers lives in very close proximity to the murder house. She is still freaked out. I don’t blame her.

Keven Lee Graff, 31, pleads guilty to murder and nine other felonies. He is to receive two consecutive life terms in prison without the possibility of parole.
By Andrew Blankstein and Tiffany Hsu, Los Angeles Times Staff Writers
12:14 PM PST, February 26, 2008
A man accused of beheading a Hollywood screenwriter and fatally stabbing his neighbor in a drug-induced rage pleaded guilty today to murder, torture and other felonies under a plea deal between his attorney and prosecutors, authorities said.

Under the terms of the plea agreement, Keven Lee Graff, 31, pleaded guilty to 10 felonies and will receive two consecutive life terms in state prison without the possibility of parole for the June 2004 slayings of Dr. Morley Engelson, 69, and Robert Lees, 91, one of the first screenwriters to be blacklisted in Hollywood during the McCarthy era.

Deputy Dist. Atty. Richard Ocampo said he would withhold comment until Graff is sentenced April 4 before Los Angeles County Superior Court Judge Michael Johnson . Graff’s attorney could not immediately be reached, but earlier had argued that Graff suffered from “a severe mental illness consistent with bipolar disorder with psychotic features or schizoaffective disorder.”

The two victims lived in an upscale Hollywood neighborhood of Spanish stucco, English- and Craftsman-style homes, where burglaries had been the worst crimes. The deaths shocked neighbors and Los Angeles police detectives, who described the killings as among the most gruesome they had seen.

Prosecutors alleged that Graff beheaded Lees, a co-writer of the 1948 comedy classic “Abbott and Costello Meet Frankenstein” who also worked on the TV show ” Alfred Hitchcock Presents.” Graff carried the head from Lees’ home, in the 1600 block of Courtney Avenue, over a back fence to Engelson’s home on Stanley Avenue, between Hollywood and Sunset boulevards, police said. The suspect then fatally stabbed the doctor, likely using kitchen knives from the victims’ homes, police said. Engelson had been on the telephone making airline reservations for a business trip to San Jose. The agent reported hearing a commotion before the line went dead.

Graff was arrested minutes after L.A. Police Chief William J. Bratton appealed for help in the case. Guards at Paramount Studios had turned away a man at the main visitors’ gate about the time of the news conference. Then after following his movements on video cameras, security personnel recognized him.

The suspect was apprehended as he sat on a wall under a row of ficus trees near Melrose Avenue. He had a Bible and a small can of Mace, officers said.

The case was beset by delays, including numerous pretrial hearings and changes in the prosecution teams.