Dear, as I held you close in my arms, angels were singing a hymn to your charms.

For thirteen years (1955-1968), each Saturday night, the Geritol crowd could turn on The Lawrence Welk Show on ABC-TV and watch the wholesome Lennon Sisters sing their hearts out. The popular quartet from Venice, CA made their Welk debut on Welk’s Christmas Eve show, December 24, 1955 singing the popular tune “He” (about the Heavenly Father). With their angelic faces and tight harmonies, the Lennon girls sold the lyrics: He still finds the time to hear a child’s first prayer. Saint or sinner calls and always finds him there. From that debut, Dianne (age 16), Peggy (age 14), Kathy (age 12) and Janet (age 9) were TV stars.

To TV audiences, bandleader and host, Lawrence Welk, was the Lennons’ beaming father figure, but their real father, Bill Lennon, was always watching from the wings, and acting as their manager.

In 1955, The Lennons were a tight-knit Catholic family living in a small two-bedroom house in Venice, CA with their milkman Dad and house-wife Mom. When Larry Welk Jr. caught his classmate Dianne (Dee Dee) Lennon singing at an Elks Club party, he arranged for her and her sisters to sing for his famous father – who was home with the flu. Welk loved the girls and hired them for his new TV show on ABC.

The Saturday Welk show was broadcast live from the Hollywood Palladium, at 6pm on the West Coast and 9pm on the East Coast. 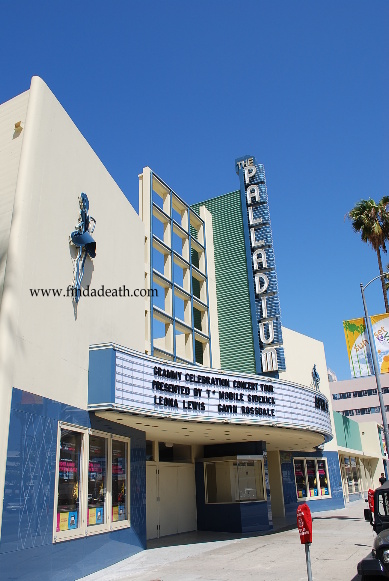 Even after the show switched from black-and-white to color, the production was done live-to-tape and the girls learned quick how to perform perfectly with no re-takes allowed. The Lennon Sisters were paid the scale rate for a singing group (Welk only paid scale). During their hiatus periods and school vacations from parochial school, the girls performed at state fairs and toured with the Welk band.

Eventually, the money (from personal appearances and merchandising) rolled in and the growing Lennon Family (with its eleven children: six girls and five boys – and their live-in grandmother) moved to a six-bedroom Victorian home in Venice, which sold for $2,135,000 in 2007. 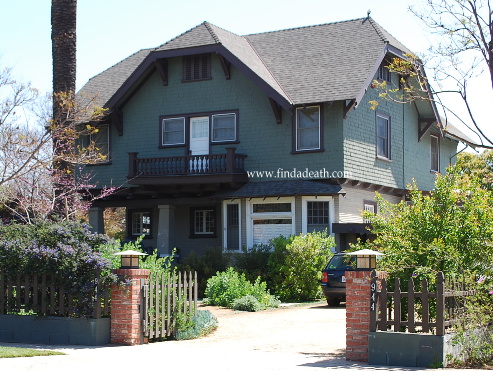 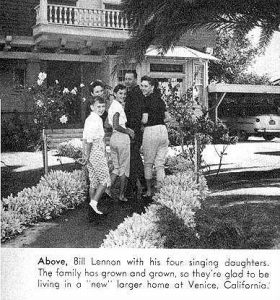 By the mid 1960s, the girls were young adults and getting married and having children. Welk tried his best to keep the Lennons looking innocent and hid baby bumps with props, costumes and scenery. 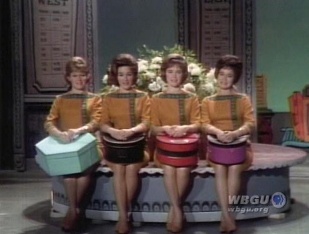 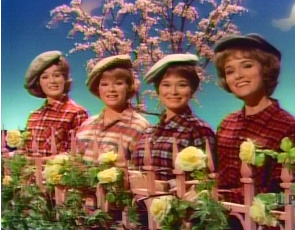 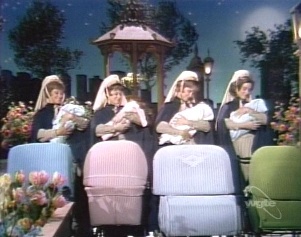 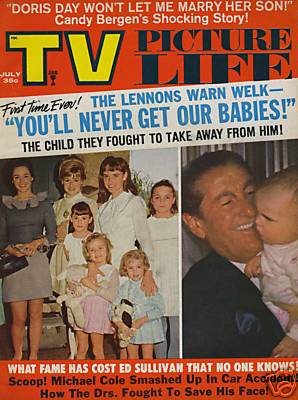 TV and Movie tabloids of the time, liked to plaster the Lennon Sisters on the cover with sensational headlines hinting at backstage dramas. They hinted at friction between the girls and their TV boss Lawrence Welk – usually the items were nonsense. In actuality, Welk may have been less than thrilled that his girls were marrying and having babies, but he was more likely really annoyed that their manager/father Bill Lennon fought to have each girl paid scale as separate performers instead of the previous group rate. (Ouch). By 1968, the girls wanted to go their own way and agreed to host a variety show under the name, Jimmy Durante Presents: The Lennon Sisters. Welk was then undoubtedly pissed.

Around 1964, Chester W.H. Young, a former Air Force officer and current homicidal maniac, began writing the Lennon family. He was infatuated with Peggy Lennon and often referred to her as his “true wife”. He had appeared at the Lennon’s front steps in Venice CA and the police were called, but his visits, calls and letters persisted. The Secret Service took notice in 1965 when he threatened President L.B. Johnson for not intervening to allow him to wed Peggy. 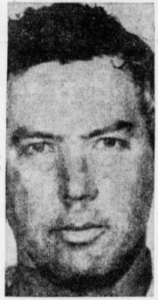 Young was committed to California’s Atascadero State Hospital in 1965 as dangerously insane. He was transferred to a U.S. Medical Facility in Colorado but released in 1966 in the custody of his brother.

Just to add a bit more madness to the second week in August, 1969 – roughly 108 hours after Sharon Tate lost her life.

On the 12th, around noon, Bill Lennon (age 53) was leaving his job as golf instructor at the Marina Del Rey Golf Range, which is now a Toyota Dealership.

He was approached by Chet Young (age 38) and was accosted in the parking lot. 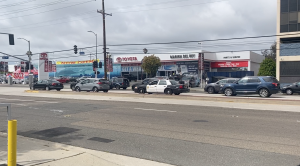 Lennon knew exactly who he was from his door-step visits and the men had words. Witnesses saw Young pull a rifle from a sack. The men scuffled over the weapon. Lennon reportedly yelled, “No. Don’t Do it. Help! Help!” His cries for help were useless as the stalker fired at Lennon’s back and wounded him. Lennon crawled to a corner of the fence and slumped against a telephone pole.

Young ran up and put the gun to Lennon’s temple and fired. The killer ran across the street to another parking lot, threw the gun in the trunk and jumped in his Oldsmobile Cutlass and fled. 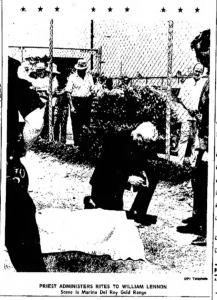 An all-points bulletin was placed for the 6′ 2″, 210 lb pock-marked, bearded assailant.
The Lennon murder was mixed in with the Tate–LaBianca slayings by the media.

Bill Lennon’s funeral was held on August 15, 1969 at St. Mark’s Church in Venice and attended by 1,000 mourners including Jimmy Durante and Lawrence Welk. 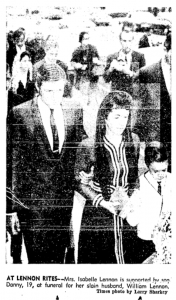 This house is roughly 100 yards from the church they regularly attended, St. Marks. 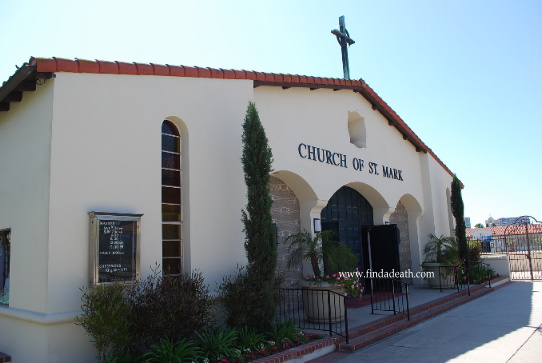 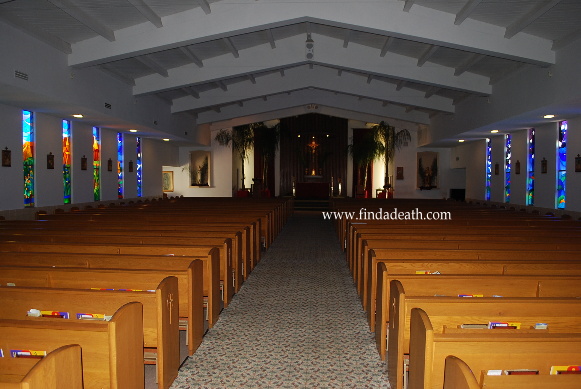 After the service, Bill Lennon was buried at Holy Cross Cemetery in Culver City. Plain-clothes police watched the service in case the murderer showed up. 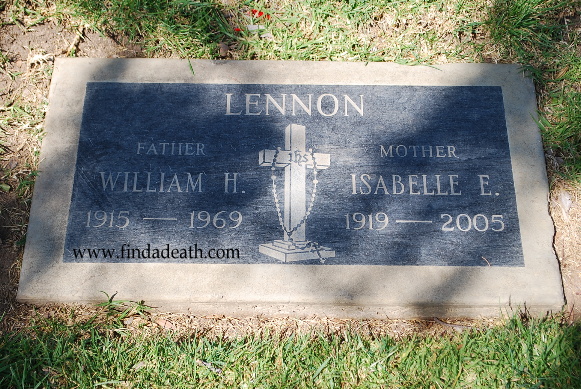 The TV & Movie tabs had a field day with the shots of the grieving Lennon Sisters. 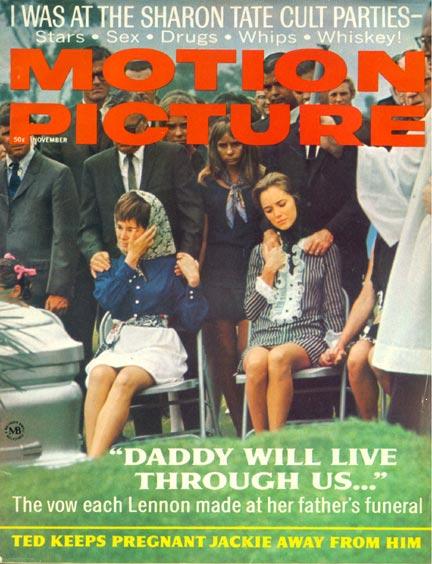 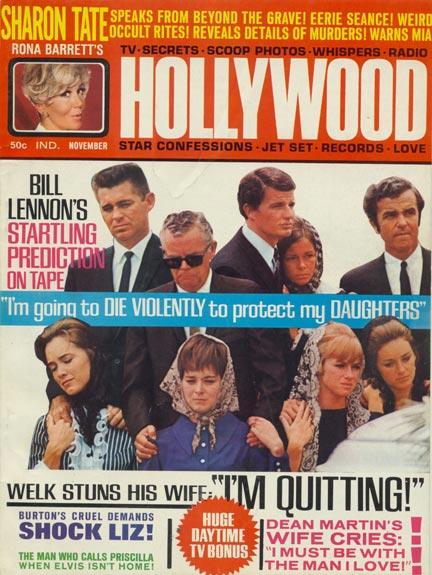 When Bill Lennon was murdered, his wife of 30 years, Isabelle (Sis), still had seven children living at home under age 18. Kathy Lennon told an interviewer, “We looked at (Mom) and she was just this rock who said ‘And we go on.'” They did. The Lennon Sisters proceeded with their Variety show commitment but quit after one season. 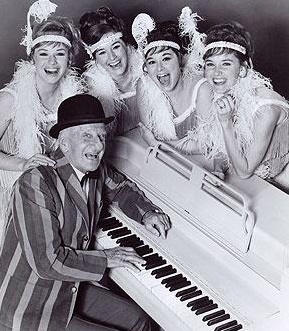 Two months after the murder, on October 11th, 1969, Chet Young was found in his car trunk parked in the High Sierra. He had rigged a hose to kill himself with carbon-monoxide fumes but when that failed he chose to shoot himself with the murder weapon. He left two letters, one addressed to Peggy and one addressed “to whom it may concern.” Young referred to Peggy Lennon as his “wife” and asked her to explain to the “children” that he took his life because they could not be together. Young explained, “It was not easy to wait until high noon to kill Bill Lennon who instigated so many of the crimes. I was certainly justifiable (sic) and the least I could do as a husband and father.” 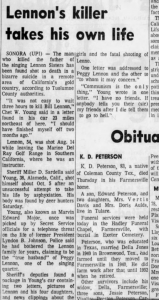 The sisters later uncovered an unopened fan letter with a cutout of their father Bill, a picture of a gun pointed at his head, and the words “HIGH NOON” (the time of the murder).

The Lennon Sisters raised their families and appeared in Las Vegas and on TV Variety and game shows of the 1970’s and 80’s. In 1987 there was an unveiling for their star on the Hollywood Walk of Fame, on Vine Street. 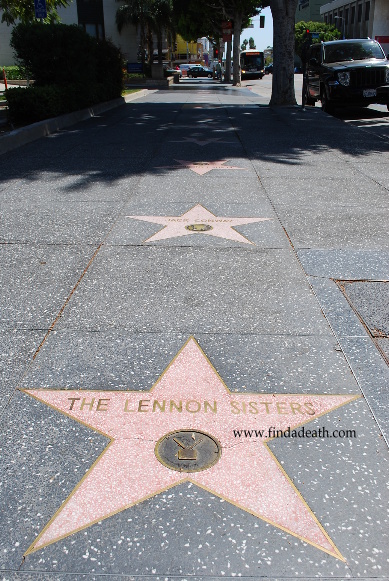 In 1995, Larry Welk Jr. invited the entire Lennon clan to Branson, Missouri to headline at the Welk Champagne Theatre. The Californian Lennons and their extended families moved east.

Mrs. “Sis” Lennon eventually got re-married to a former high school sweetheart (Joe Miller) in 1998 and lived to the age of 85. She died at her home in Branson, Mo on May 1st 2005 surrounded by her family.  She is buried next to her first husband.

Here is the video I created about the story.

Peggy Lennon retired from show business in 1999 and is married to her second husband and living in California.