The trifecta of showbiz gays on late 1960s-early 70s American television were Paul Lynde, Charles Nelson-Reilly and Alan Sues. All these comic actors kept one foot in the closet but proudly showed flashes of unabandoned queerness that provided the only visibility of “that type” to the red-blooded American homosexual viewer desperate to see representation of themselves, yet keeping the conservative faction happy by being a target of unthreatening humor and mockery.

“You could play gay if it was funny and not sexual, but you couldn’t BE gay.”

Sues (middle name Grigsby) was born March 7, 1926 in Ross CA to parents who were successful horse breeders. Sues’ biography Alan Sues – A Funny Man by Michael Gregg Michaud revealed the sadness of a childhood raised by uncaring alcoholics who never really connected with their son.  Once his mother said to him, “If I thought you were queer, I’d rather you were dead.”  He grew up in affluence, but his parents were either emotionally distant or hyper-critical. This led to struggles with depression and his own alcoholism later in his life. His desire to be a stage actor propelled him forward to his own path.

He was drafted in the Army during WWII.  As Alan recalled  “I ran past a wall of wailing women in scarves, crying and blowing kisses to their departing sons.  Fathers were proudly shaking their kid’s hands and slapping them on the back.  ‘Go to hell,’ I screamed at my family.”

He used his veteran’s benefits to pay for acting lessons at the Pasadena Playhouse in the late 40s. Sues moved to New York in 1952 and made his Broadway debut as a boys’ school bully in Tea and Sympathy from 1953-55. Sues wrestled with his homosexuality and for about five years in the 1950s was married to his nightclub act’s female stage partner. They later divorced amicably – and his gay side won the wrestling match. Sues was introduced to the fabulous (then secretive) world of Manhattan gay bars by drag-performer/actor Charles Pierce. Sues said, “Charles led me astray…but he did it with style. And a sequined turban.”

In the 1960s, Sues appeared in the memorable Twilight Zone episode “The Masks” and did guest spots on Honey West and In The Wild West (aka The Wild, Wild West). He appeared in a couple films, The Americanization of Emily and Move Over, Darling.

TV Producer George Schlatter saw Alan Sues perform Off-Broadway in The Mad Show musical along side Jo Anne Worley and hired him to join his Rowan & Martin’s Laugh-In show which became a colossal ratings hit and made the cast of zanies and their catchphrases well-known to the entire country. 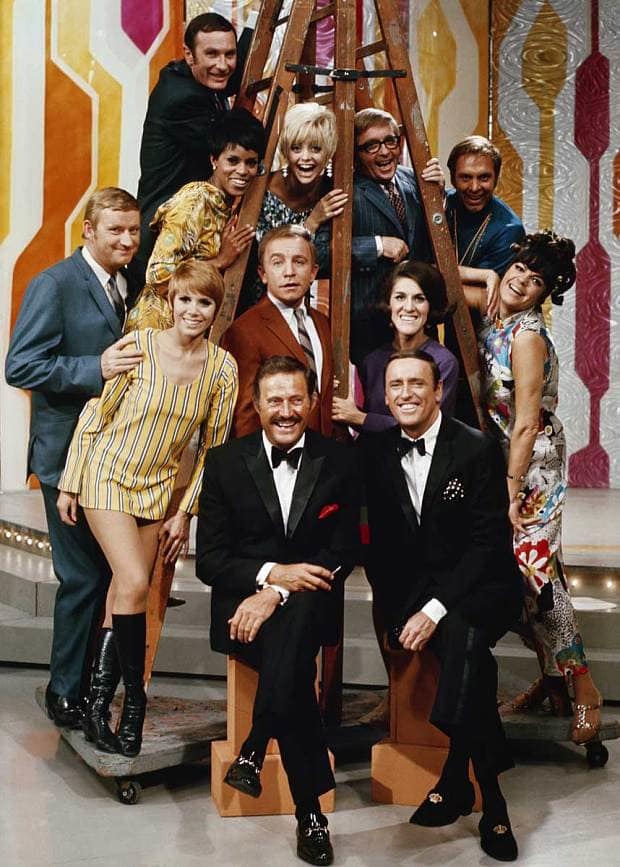 George Schlatter said about Sues, “He was a delight; he was an upper. He walked on stage and everybody just felt happy. Alan was a free-spirit…a love child. He’d scold me if I ever got firm with the cast. Laugh-In was a series of accidents and Alan Sues was one of my favorite accidents.”

Sues portrayed a variety of characters during his time on Laugh-In (1968 -1971), including a flaming queen sportscaster “Big Al” who was more interested in uniform colors than analyzing the defense on the field. He’d campily show his approval by ringing a tiny hand bell which he called his “tinkle”. He also played the recurring character of alcoholic kiddie show host “Uncle Al” ( the kiddies’ pal) who would struggle with a hangover while performing/yelling at his studio audience of cheering children.

Occasionally he would put on a wig, feather boa and false eyelashes and play his co-star JoAnne Worley.  She joked, “He looked better than me.” Sues was always good for a laugh – especially if playing a cowboy ordering a frozen daiquiri in an Old West saloon skit. 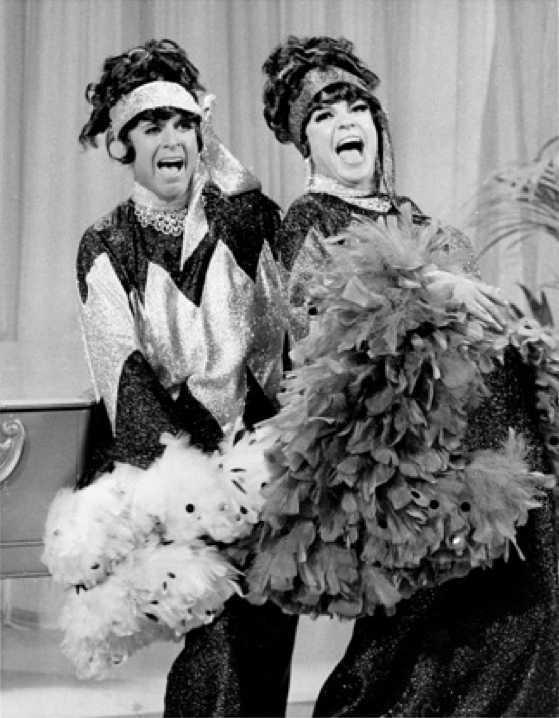 Sues left Laugh-In before its final season and though grateful for the exposure, he wasn’t happy with the direction the writing was heading.  It seemed that every skit he was in turned into a stereotypical portrayal of a mincing queen and it just wasn’t funny anymore sooo… Sues bit the bullet and took the role as a flamboyant Peter Pan in a series of 1970s Peter Pan Peanut Butter commercials.  Sure.  Makes sense.

Sues later acted in summer stock theater productions as well as co-starring in the never-to-be-sold Garry Marshall pilot for the US-version of the BBC Britcom: Are You Being Served? called Beanes of Boston. Sues played swishy (of course) department store clerk “Mr. Humphries” opposite Charlotte Rae as “Mrs. Slocombe”. YouTube had this unfunny curiosity in its collection – and there’s no surprise the series never happened.

When tv or stage work wasn’t available, there was always a game show. He stepped into the legendary “center square” for Paul Lynde on The Hollywood Squares when Lynde temporarily left the show because of a contractual temper tantrum.  Sues once appeared at the right hand of Carol Wayne on Celebrity Sweepstakes. Debra Lee Scott was on his right. DY – ING.
Sues had a happy run as Professor Moriarty in a 1975 revival of William Gillette’s Sherlock Holmes on Broadway. He said he cherished the villainous role and continued in the part for the National touring production.

His 1979 voice over work in Rankin/Bass’ Rudolph & Frosty’s Christmas in July provided a paycheck, perennial reruns and some great anecdotes. Sues said that Mickey Rooney (Santa) and Shelley Winters (Crystal the snow wife) almost got into a fistfight while recording their scenes.

Later in life, Sues saw Mickey Rooney when they both participated in the Hollywood Christmas Parade.  Sues approached Rooney, “Hi, Mickey!  How are you?” “He didn’t know who the hell I was.  ‘Who is it?’ he croaked.  “I said, ‘It’s Alan Sues.”  “I don’t know you,” he snapped.  I told him we worked together on Rudolph and Frosty’s Christmas, and he asked me when.  I said about twenty years ago.  “Jesus Christ!’ he yelled, ‘Move on!! Get on with your life!  Jesus, get over it!”  Mickey’s status as a total dick is almost unsurpassed.

For a while Alan took to designing hats and designing inflatable greeting cards. 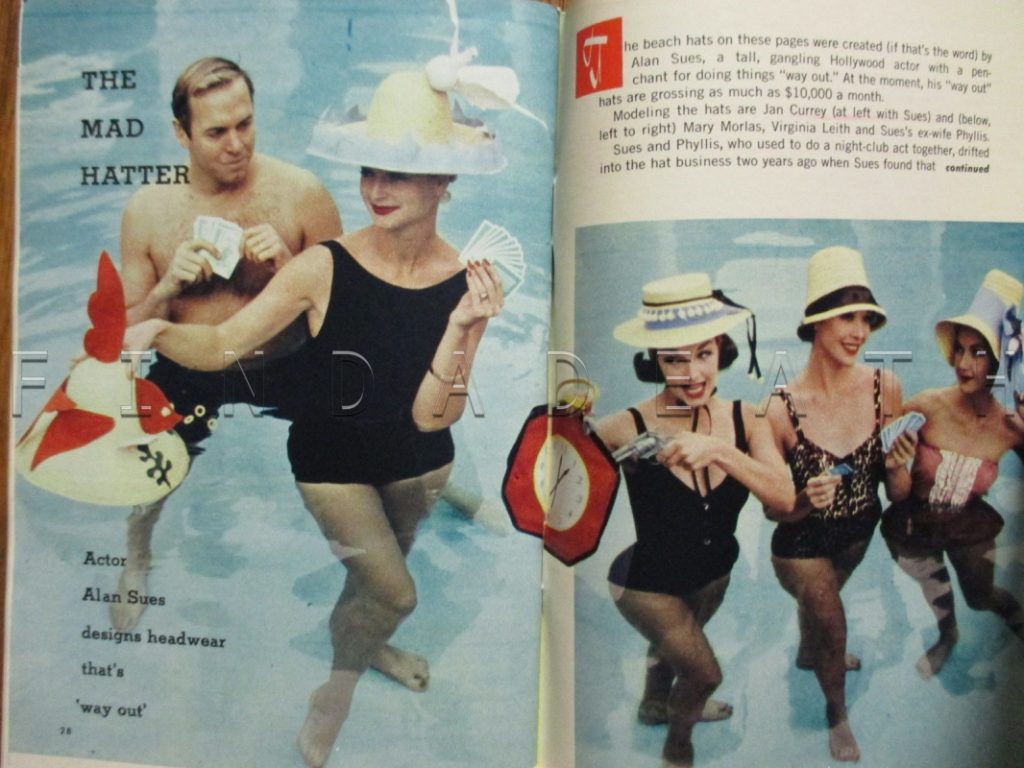 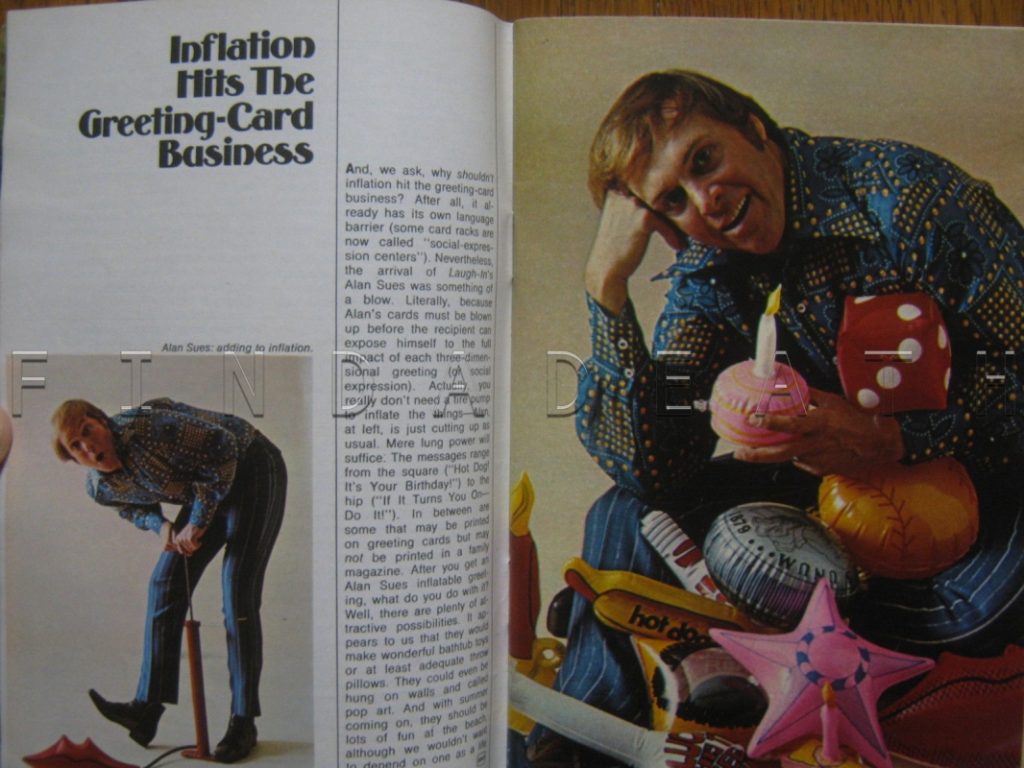 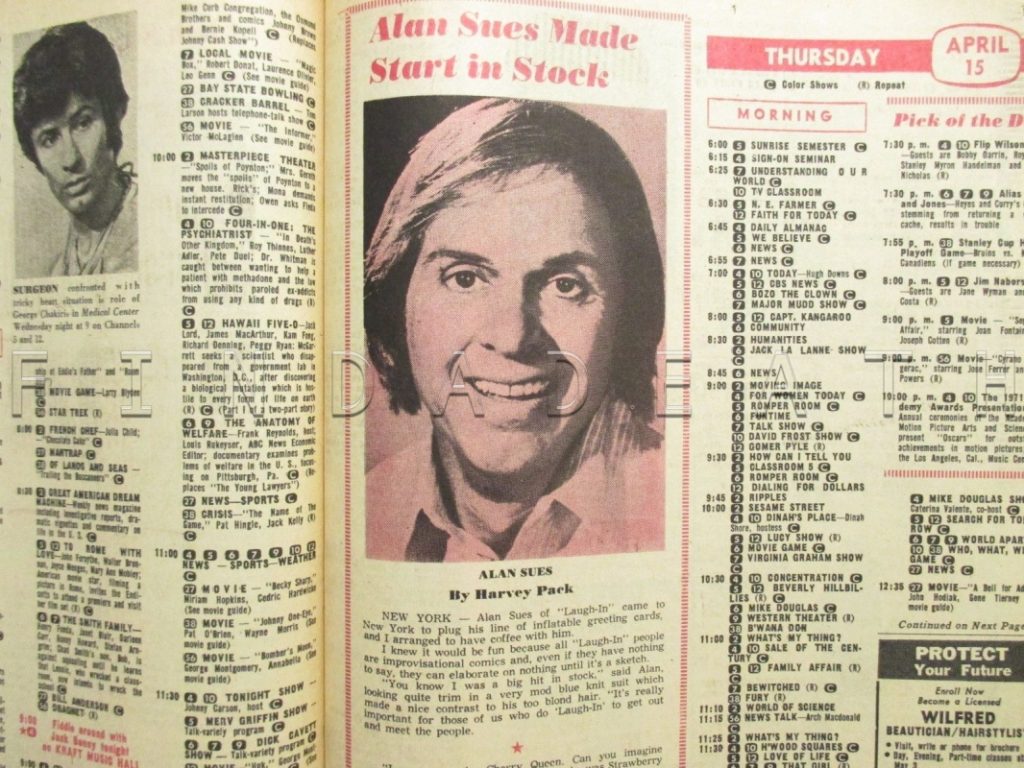 In the 1980s, Sues turned up on The Brady Brides and Punky Brewster (hated her) and in the 90s performed his solo show, and played the diction coach in a tour of the musical Singing in the Rain.

In his later years, Sues appreciated hearing from a generation of younger fans who saluted his work on TV in the era when gays had no visibility in mainstream society. He lived for decades in his West Hollywood, California home on Dorrington Ave. and it’s where he would live until he died. 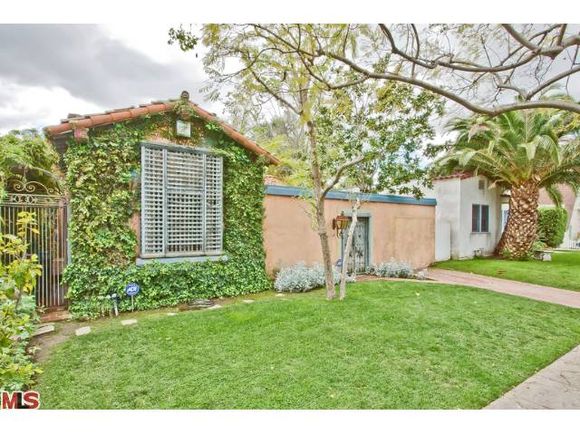 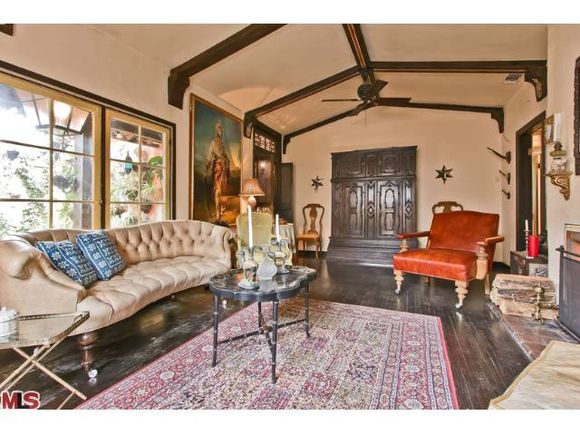 In 2007 he had a pacemaker installed.  He took a fall at Dick Martin’s memorial in 2008, and another earned him a broken leg and a hospital rehab stay.  He ventured out less and less.

His last public appearance was for a Twilight Zone reunion and Alan signed autographs for eager fans. 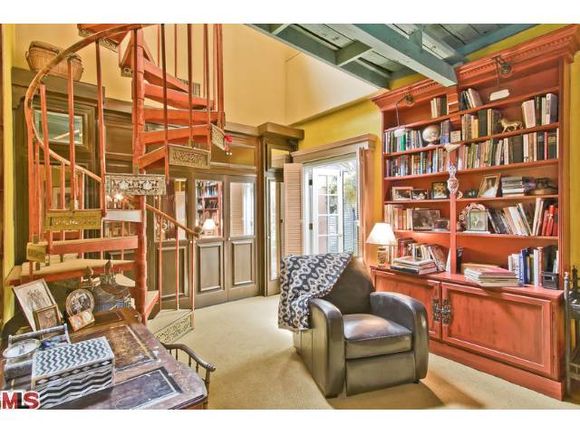 On December 1, 2011 Alan suffered a heart attack while sitting in his recliner watching TV with his beloved dachshund Doris on his lap.  Paramedics could not revive him.  He was taken to nearby Cedars Sinai Medical Center and pronounced dead at 10pm.   He was 85.

Alan specifically did not want a funeral. He was cremated and shipped to family in Connecticut.

In February of 2018 Alan’s Suesical Estate was being severely changed/modified/fucked. 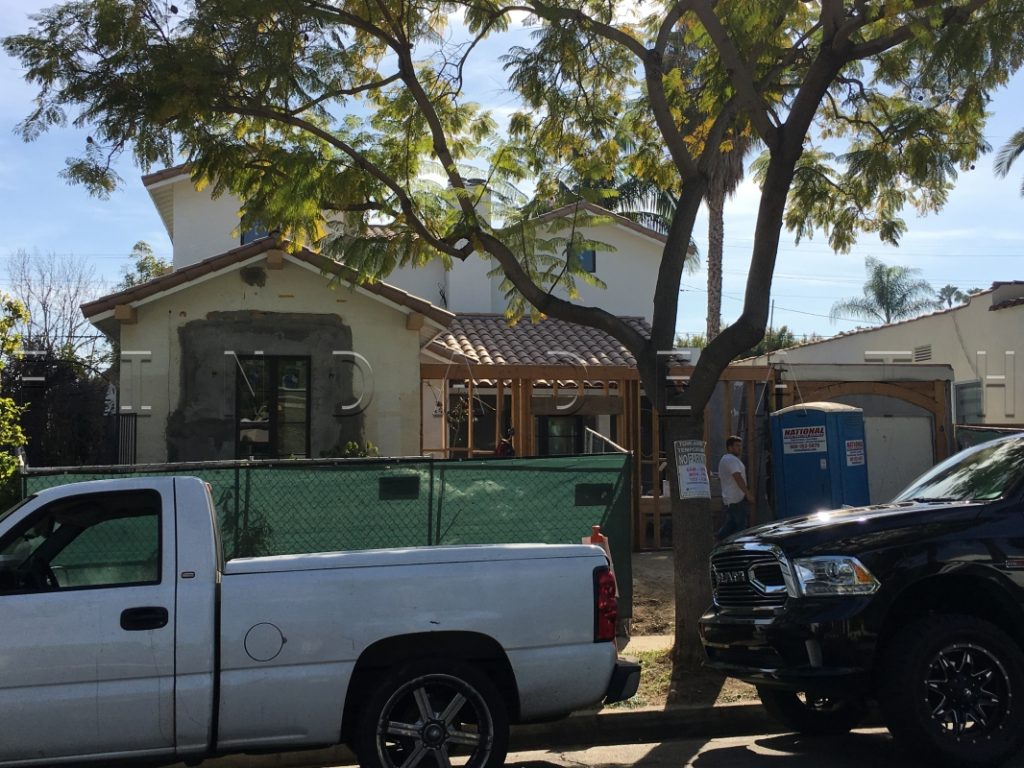 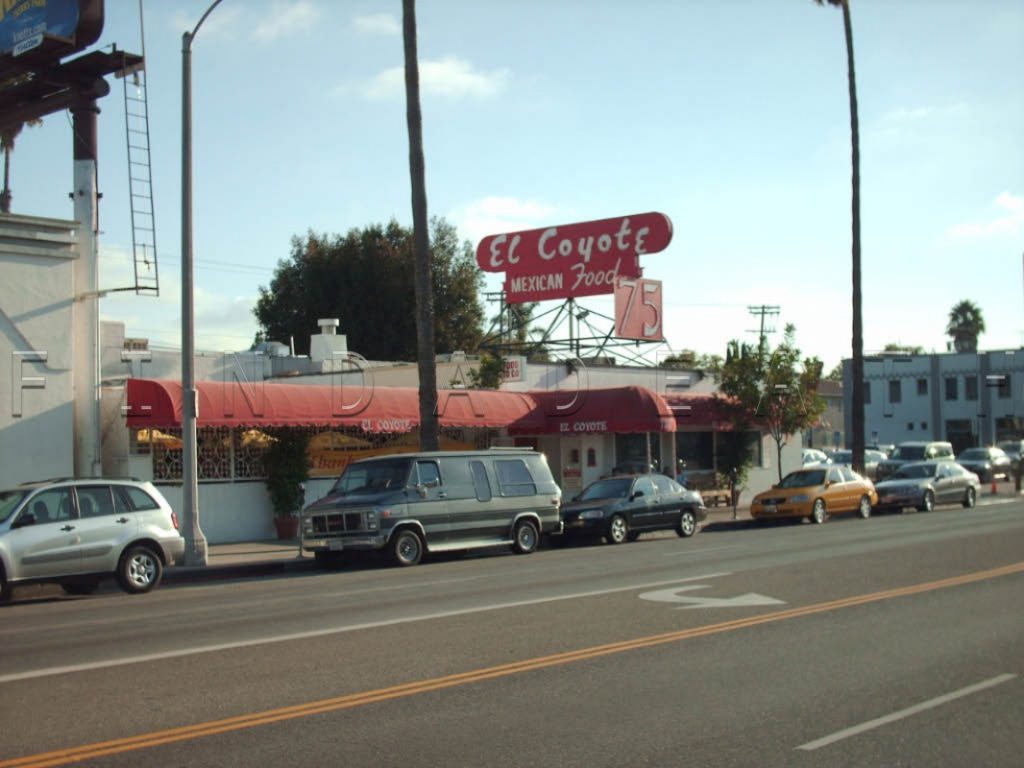 Alan’s Biography is available below. 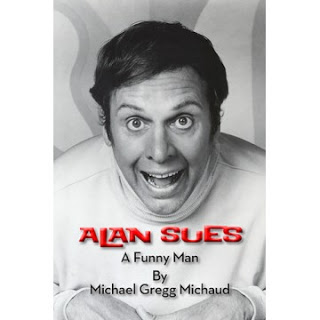