Time for go to bed.

Like several people associated with Ed Wood, Tor would be largely forgotten if it weren’t for making Ed’s horrible films. Vampira? Nope. Kelton the Cop? Nuh uh. Criswell? Possibly. Bela Lugosi, certainly! But Ed’s movies, for as terrible as they are, have staying power. They weren’t even good-bad. They were just bad.

I’m sure there are a lot more of you that are experts on this subject, I just dip in when it interests me. Tor, from what little I’ve read, was a pretty nice guy. Swedish wrestler. A gentle giant.

I am stuck at jury duty today, and brought my laptop. Dull dull dull, but I did lunch over at Clifton’s. I also bopped over to the records archives and looked up Ed Wood’s probate file on the suggestion of my new pal, Steve, who was on my tour last week. 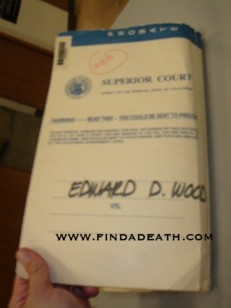 What is most interesting to me about Tor, is that the last footage of Bela Lugosi that exists (now I’ll probably be lambasted by people who are experts saying, “Well ACtually – Bela did…”), with him smelling the rose bush, was actually filmed outside Tor’s home in Sylmar. Coincidentally, just a block over from a street called Nurmi. Coinkydink? 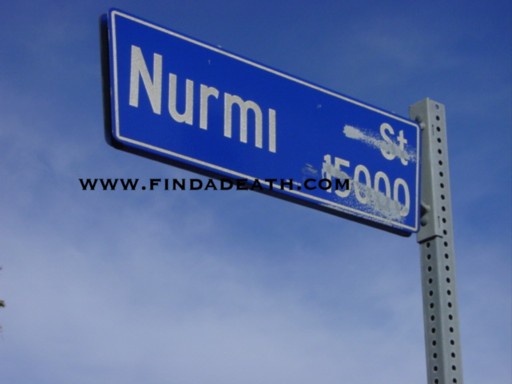 Here is Bela leaving the house, 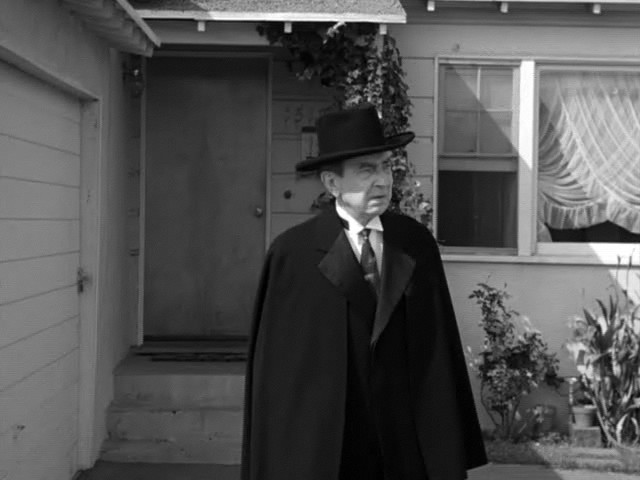 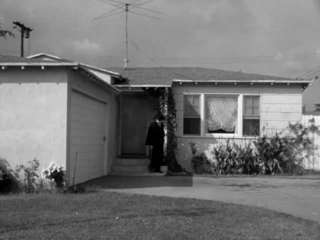 and a close up of the door today. 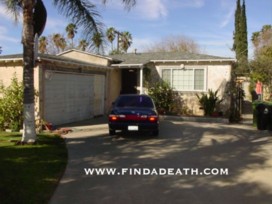 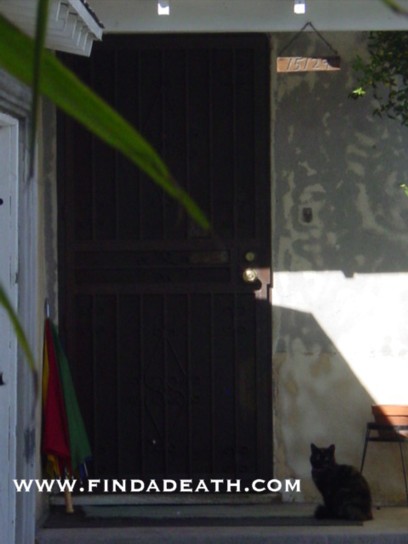 For those of you who don’t know, Maila Nurmi was the woman who played Vampira. 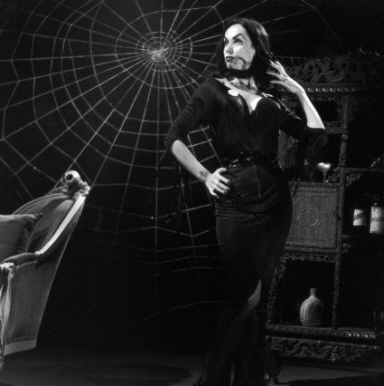 The outfit Vampira wore was a sort of Morticia Addams style, and she hosted horror flicks on Los Angeles television in the ’50s. Sorta like Elvira. Sorta EXACTLY like Elvira. IMHO Elvira completely ripped off Vampira, and Maila Nurmi had a lawsuit against Elvira for years, but didn’t have the resources that Cassandra Peterson has, therefore had to drop the suit. 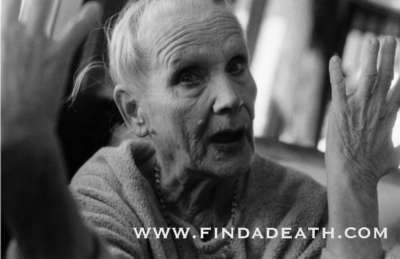 Maila (photo by Mark Berry) lived on Hollywood Boulevard in a low-income apartment building. She claimed she fucked James Dean, and that’s all I need to know. Vampira wins.

What little info I was able to learn about Tor was from Rudolph Grey’s book, Nightmare of Ecstasy – the Life and Art of Edward D. Wood Jr. Tor was a professional wrestler, but it was just a put on. He would often go out for drinks with his opponents after a match. By all accounts, a lovely man.

They shot Plan 9 From Outer Space on a soundstage, which still exists, just off Santa Monica Boulevard. 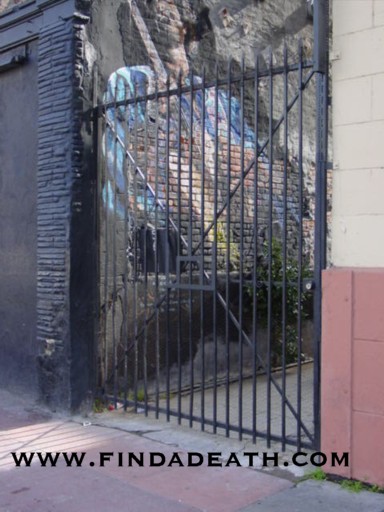 There were some nice young men in a band called Goodnite Moon who were rehearsing the day I peeked in, and were nice enough to let me in and take pictures. 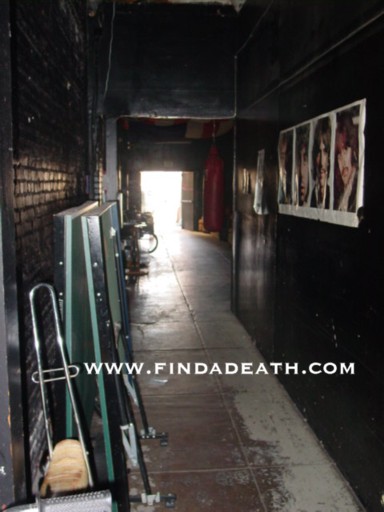 It was awesome to be in the place 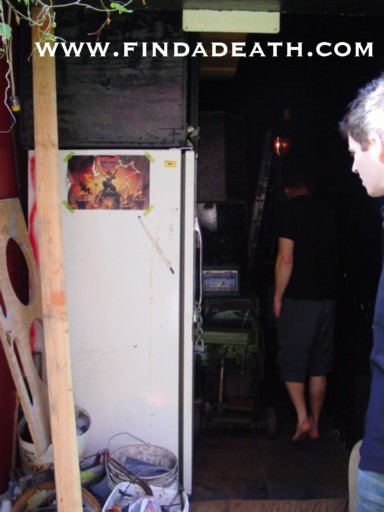 where that cinematic history took place, and according to at least one source, the film Ed Wood was shot there as well. 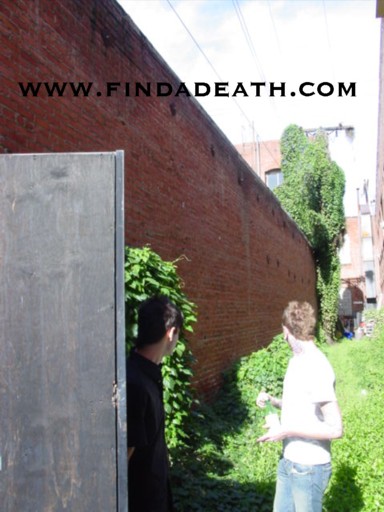 I returned with a camera crew not that long ago, and we were able to shoot the soundstage for the DDT dvd.

Apparently, Ed would (HRR) get hammered (martinis) after a day’s shooting in the bar in front of the soundstage called, Gold Diggers. 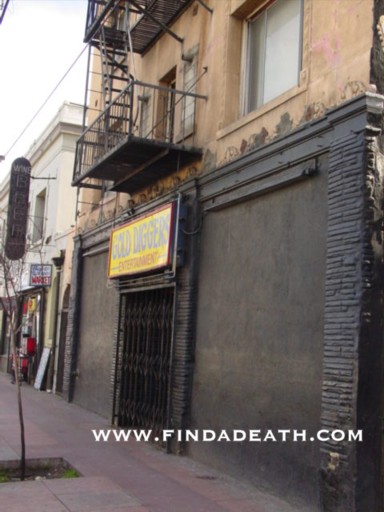 I went to Gold Diggers last night for the first time, with my friends Brian and Lon.  I didn’t realize it was a stripper bar.  The things these girls could do with their booties.  Had two beers’ worth of a blast, then ventured on a local pub crawl.  Fun place.

According to the book, Tor drove one of those tiny cars, much like the original minis, and had special eating utensils in his house that appeared to be little shovels. 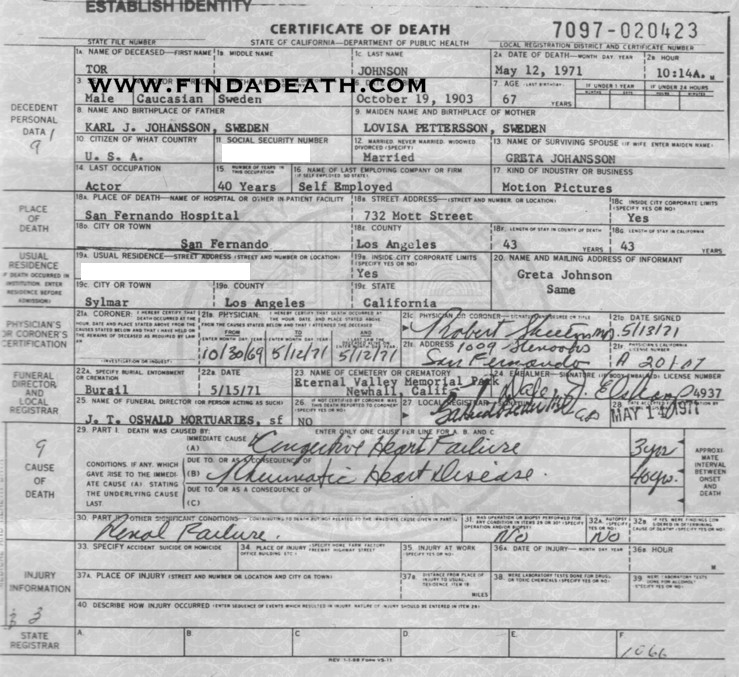 Sitting next to me in the jury room is my new friend Bert. Bert is a doctor, and very nice. I was looking at Tor’s death certificate and wondered how a person can have heart disease for 40 years, and nice Bert told me that it is literally the result of strep throat. Before antibiotics were readily available, strep would cause scarring on heart valves, thus making the ticker not so perfect. I’m paraphrasing here, obviously. Bert was much more eloquent.

Tor is buried at Eternal Valley Memorial Park, just a few yards from George Spahn, of THE Ranch. 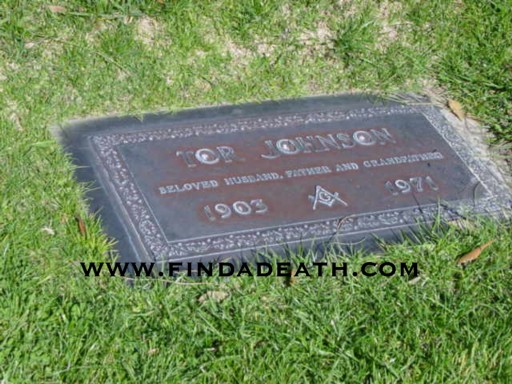 Trivia: I understand that the Tor Johnson Halloween mask is a consistent best seller, 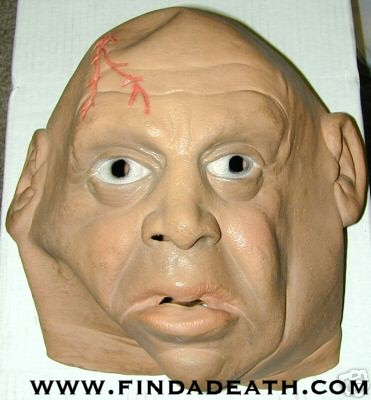 much better than this one. 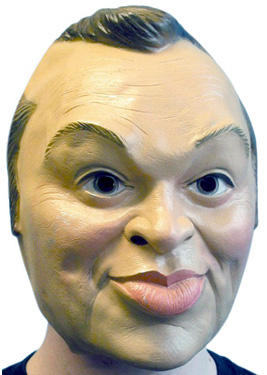 My pal Verne Langdon sends this:

Here is an accurate depiction of the Tor Johnson mask we made at Don Post Studios (I owned half the company at the time, and conceived the mask and set up the deal with Tor, who was a life-long frind of mine).

I hope you’ll use this photo in place of the one you’re displaying now, as it really doesn’t depict what made the mask our Post Studios ALL TIME BEST SELLER!

You have my permission to use this photo, and I speak for Don Post Jr. and Don Post Studios as well when I make this statement to you. 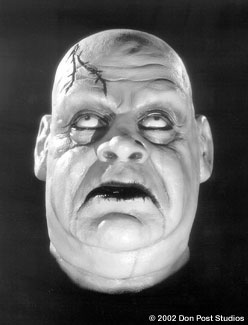 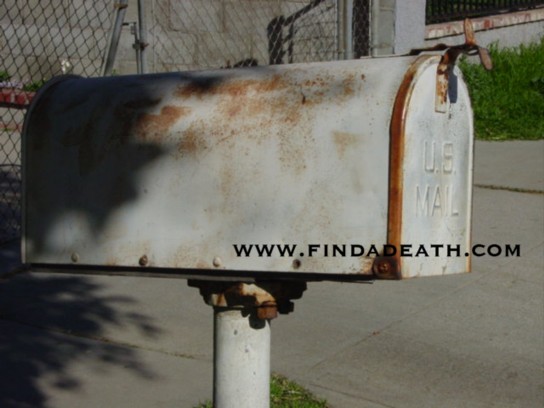 Thanks to Randy, for accompanying me to these locations, and Harry for helping me to not look like a total idiot.