The closer we come to the negative, to death, the more we blossom.

A debt of gratitude goes to Patricia Bosworth, who wrote one of the best biographies ever written, “Montgomery Clift, a Biography.” (I hope she doesn’t have a fit about me mooching information.)

By May 12th of 1956 – Monty was already filming Raintree County with Liz Taylor. Monty was very close to Liz Taylor and her husband at the time, Michael Wilding. According to Bosworth, both Wilding and Liz were bugging anyone who had a moment to spare with their marital problems, and Monty wanted time away from them. On this particular night he planned a quiet evening in, and gave his driver the night off. Liz called and invited Monty over for dinner. Monty said no, Liz. Liz kept calling back, Monty kept saying NO, Liz. Monty finally gives in to Liz (probably just to get her to shut up), and drives over (in a car he hadn’t driven in months) to her house. Rock Hudson is there (fag hag) as is Phyllis Gates (the poor chick that married Rock), Wilding and Liz, and Kevin McCarthy. Supposedly, Monty only had one glass of wine (rigggghhhht). 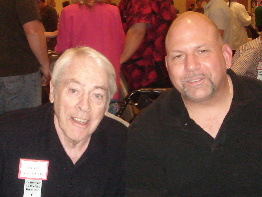 I met McCarthy recently and he swears that he and Monty were sober.  He told me he sat across from Monty – and they had an agreement that they weren’t going to drink.  He says that Monty was playing around in the car, when it went horribly wrong.

After the dull party broke up, Kevin offered to guide Monty’s car down the steep hill to Sunset because Monty was apprehensive about driving. While Monty followed Kevin down the hill, he lost control of his car and slammed into a phone pole. 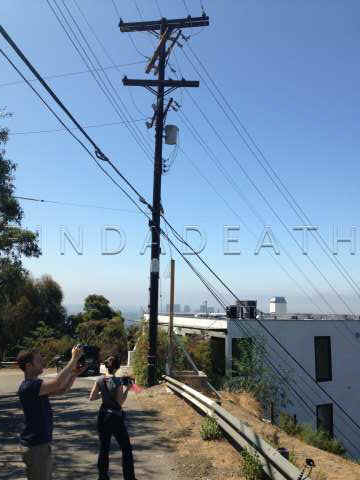 His face was practically torn off. I blame Liz for this. McCarthy drives back to the house and tells them to call an ambulance. Liz ignores this request and runs down the mountain screaming, “No! no! I’m going to Monty!” (drama queen.) This is the good part, taken from Bosworth’s book:

She was like Mother Courage. Monty’s car was so crushed you couldn’t open the front door, so Liz (ever so gracefully) got through the back door and (with dignity) crawled over the seat. Then she crouched down and cradled Monty’s head in her lap. He gave a little moan, then he started to choke (whiffy?). He pantomimed weakly to his neck. Some of his teeth had been knocked out and his two front teeth were lodged in his throat. Liz reached deep and pulls out the teeth. He was taken to Cedars of Lebanon (now a Scientology HQ in scummy Hollywood) and they operate immediately on a broken nose, fractured jaw and facial lacerations. 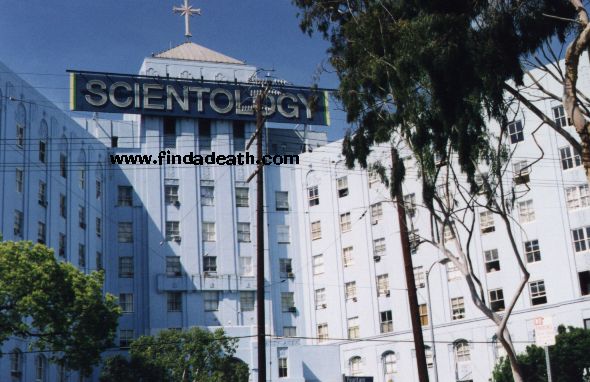 He also had a severe cerebral concussion and was put in traction for back injuries. He began a nine month physical recovery, but since his face was screwed up, he would never be the same. Some say this began “the longest suicide in Hollywood,” a downward spiral of booze and drugs.

After the accident, he was never really the full Monty again. Groan.

These next couple of pictures come courtesy of brand new friends of Findadeath.com, Stacy Weinstein and Joanne Melito. These two women are our official New York correspondents, and I am so grateful for their help. Thanks so much guys.

Eventually, Monty bought a brownstone in Manhattan. His new home was a four-story building with seven rooms, six fireplaces, six baths, and a huge garden. The address was 217 East 61st Street. 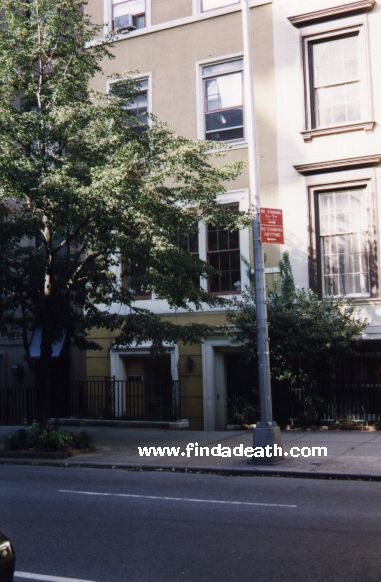 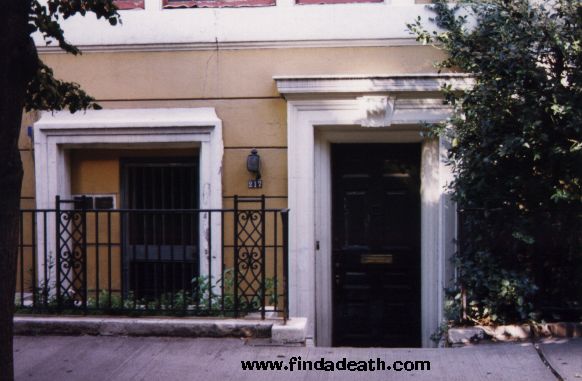 He was living with his personal secretary, Lorenzo James. I could go on and on about his condition, but to put it bluntly, he was an emotional and physical wreck. Period.

On Monday, July 22, 1966, Monty spent the day closed off in his bedroom. He and his secretary barely exchanged a word. He had a goose liver sandwich in the afternoon. At one in the morning, Lorenzo came up to the bedroom to say goodnight. The Misfits was showing on television that night, and Lorenzo asked Monty if he wanted to watch it. “Absolutely NOT!” were the last words anyone heard Montgomery Clift say.

At six the next morning, Tuesday the 23rd, Lorenzo went to wake him. The bedroom door was locked. He tried to break it down, to no avail. He finally ran down to the garden, and climbed up a ladder into the bedroom window. He found Monty lying face up in bed, naked, but wearing glasses. His fists were clenched. He was dead at 45 years old.

Lorenzo phoned the doctor. Dr. Howard Klein came over immediately, to examine the body. Rigor mortis had already set in. Monty’s body was taken to the City Morgue at 520 First Avenue, where an autopsy was performed. No evidence of foul play or suicide was found. Official cause of death was found as occlusive coronary arteriosclerosis with pulmonary edema. In reality it was from years of alcohol and drug abuse. 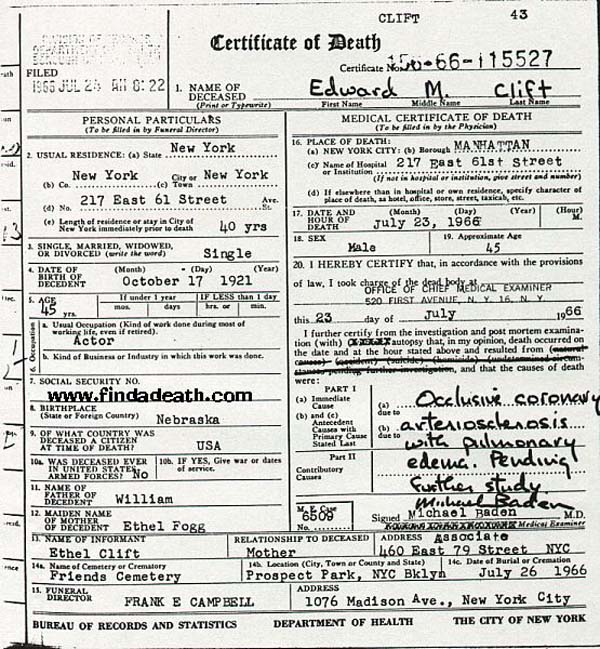 Upon hearing the news, Liz Taylor (in Paris) phoned Lorenzo. “I’m in a state of shock. I can barely accept it. I loved him. He was my brother – he was my dearest friend.” How many times has she made that speech in her life?

Monty was put in a mahogany coffin at the Frank E. Campbell Funeral Home. 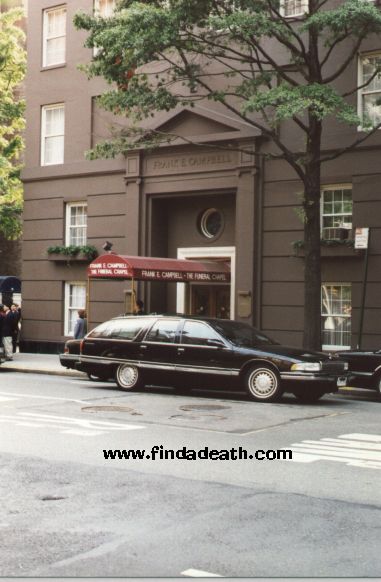 The 15-minute funeral service was held in St. James Church. 150 invited guests attended, including Lauren Bacall and Nancy Walker (the Bounty lady and Monty were very good friends). Roddy McDowall sent flowers, as did Myrna Loy, Lew Wasserman and yes, Liz did too. Big ones.

His body was taken via hearse, to the Quaker Cemetery in Brooklyn. Nancy Walker planted two hundred crocuses there. His gravestone was designed by John Benson, who also designed JFK’s gravestone at Arlington.

Trivia: My favorite quote about Monty was referring to his friendship with Marilyn Monroe. Frank Taylor, the producer of The Misfits is credited as saying, “Monty and Marilyn were psychic twins. They recognized disaster in each other’s faces and giggled about it.” Marilyn herself described him as, “The only person I know who is in worse shape than I am.”

More Trivia: Monty lived in room 928 of the Hollywood Roosevelt Hotel for three months in 1952, while filming From Here to Eternity. 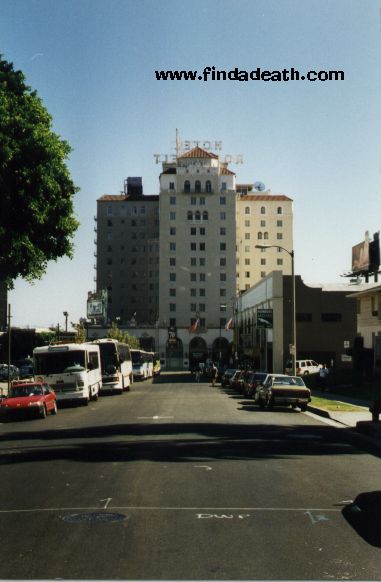 Every morning he would jog on the athletic field across the street, at Hollywood High School. 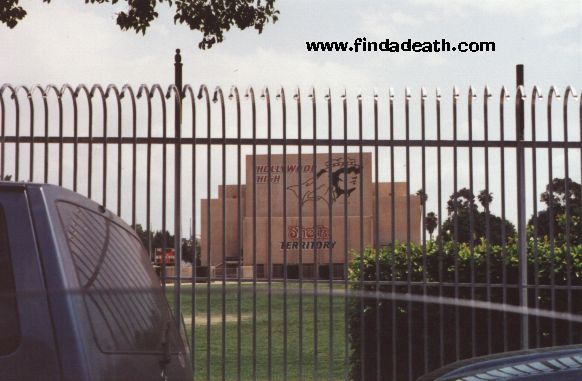 He often paced the hallway, rehearsing his lines and practicing the bugle while hanging out the window. Maids have felt something cold brush by them in that section, while others have felt a strange presence watching them or walking at their side. On a November night in 1992, an overnight guest in Room 928 felt a hand patting her shoulder while she lay in bed reading. She turned to say goodnight to her husband, but he was sound asleep. Whatever. I stayed in that room myself, for two nights. My friend told me that he was shoved in the middle of the night. The weirdest thing I experienced was finding a Madonna postcard behind the headboard. Zzz…

UPDATE January 2003, from Find a Death friend, Harry:  For Christmas, we got the DVD for “Sunset Boulevard” — too cool — with all these extra background stories, etc. One surprise for me was that Holden was not the first choice for the male lead. It was supposed to be Montgomery Clift! It even notes him in the first draft for the screen play. But for some reason (I think scheduling conflicts) they went with Holden (who had been down on his luck career-wise for several years).

April 2003, from Findadeath friend, David: Trivia about Montgomery Clift: The wife of the doctor who performed the autopsy of Monty viewed the corpse herself, and described his penis as being small and shriveled. This is in direct contrast to Roddy McDowall, who was said to be well hung. Is that nude photograph you have on your site really Roddy McDowall? In the Kitty Kelley book My Way, (a biography about Frank Sinatra) Sinatra at one of his parties decided to find out who was the most well endowed male celebrity, and so ordered the male guests to expose their members as a kind of contest. Roddy put everyone to shame, apparently.

December 2004, from Find a Death friend, Ron:  Today I checked out a book at my local public library.  It is called MONTGOMERY CLIFT: BEAUTIFUL LOSER by Barney Hoskyns.  The following comes from p. 188 of this book: “The body (Montgomery Clift’s) was taken to the city morgue at 520 First Avenue, where associate medical examiner Michael Baden performed the autopsy.  (Seventeen years later Baden would distinguish himself by regaling guests at a dinner party with a description of Monty’s tiny, uncircumcised penis.  The New York Post reported the story with apredictable mixture of indignation and glee.)”

Find a Death friend, Kevin in Tokyo: According to Arthur Laurents, who wrote “West Side Story” and Hitchcock’s “Rope” has said that Hitchcock considered Monty Clift for one of the young killers in “Rope”, and Grant for the role that eventually went to Jimmy Stewart.  Hitchcock wanted to play up the homosexual overtones, and imply that the Cary Grant character had introduced the Clift character to homosexuality.  Laurents said that Clift was gay and Grant was “at best bisexual” and so turned the roles down, as they didn’t want to stir up rooms.  Of course that subplot was lost when Jimmy “ah shucks” Stewart got the role.