First off, big thanks to my pal and Findadeath.com friend Tami Dingle for her help with this story. Much much appreciation to you, Tams.

Sam was a terrific singer. If you download his most popular song, You Send Me, you’ll get a tiny idea of his talents. Great tune. Urethra Franklin covered it pretty well too.

Sam started as a gospel singer, but ended up a Rock and Roll singer. I’d hardly call it rock, but it was the times. He sold over 10 million albums. He had a lovely house in Los Feliz, 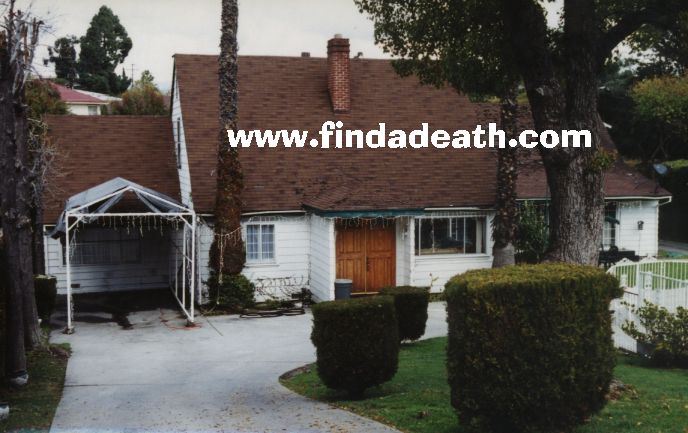 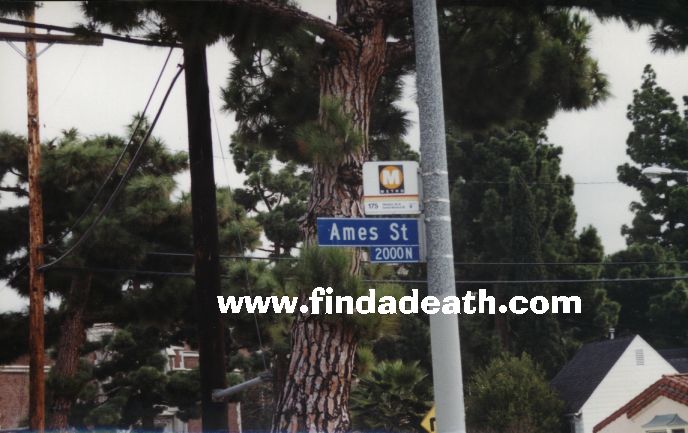 Tragically, Sam and his wife Barbara lost their 18-month child just a few months prior, in a swimming pool drowning. 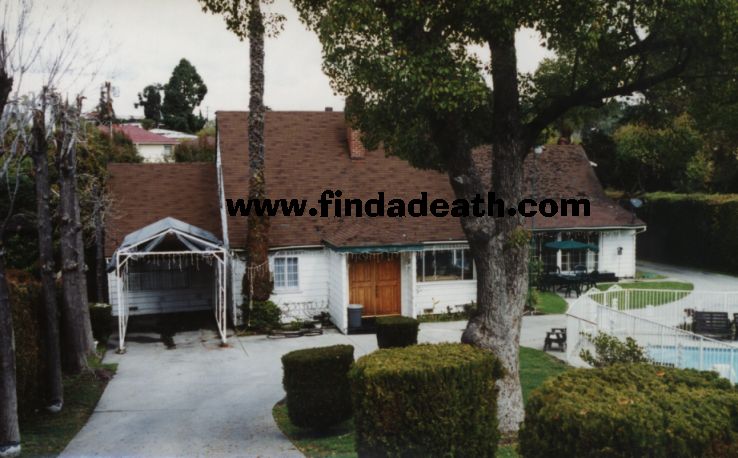 Must have really screwed them up. They had two other daughters, age 11 and 4.

Lisa Boyer was the name of the woman Sam met on the evening of December 10, 1964. She was a singer as well. She was dining with friends, and Sam was to sing the last song of his life, Good News. Apparently he offered to give Lisa a lift home, and ended up taking her to a club called PJ’s. Sam had some sort of altercation there, and they left. He offered to take her home, but he was fuming from the altercation, and drove very fast, all the way to the Hacienda Motel on South Figueroa. 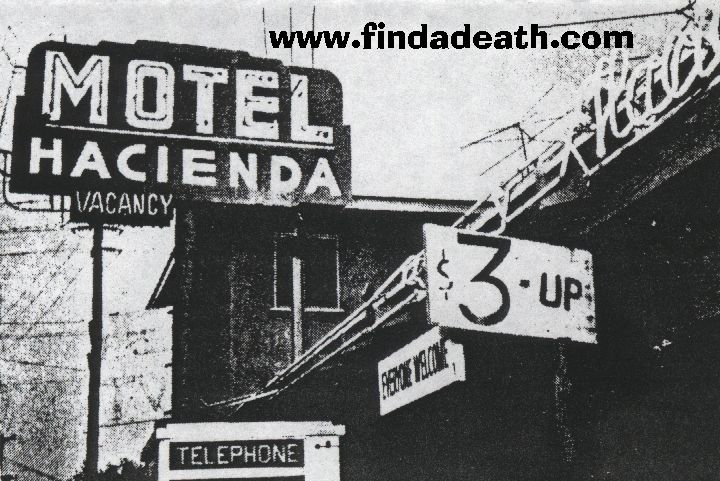 The motel is gone now, but it used to stand here. 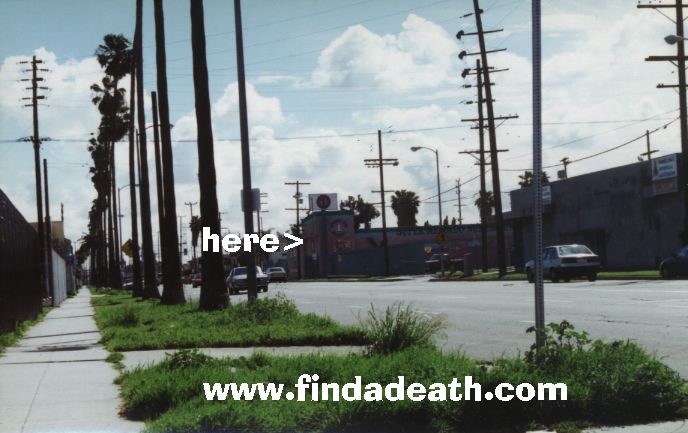 Not a very nice neighborhood, as you can see from this picture. 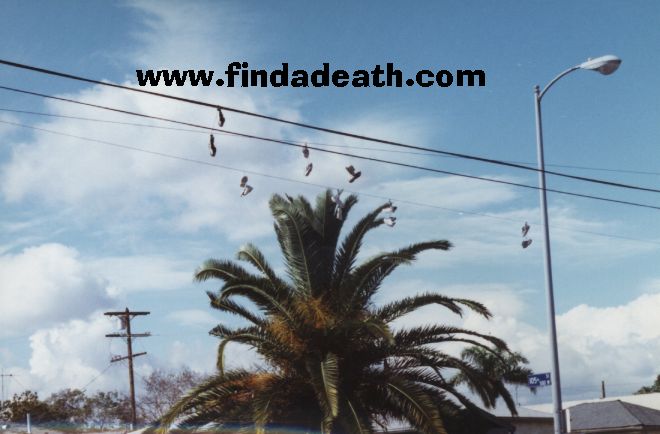 He registered under the name Sam Cooke, at 2:35am. The woman that signed him in was called Bertha Lee Franklin. She noticed that he was not alone, so she made him change the name to Mr. and Mrs. Sam Cooke. (You must be morally correct to sleep in a 3 dollar a night room.) They got to the room, and everything fell apart. According to her testimony, Sam began ripping her clothes off, and yet still proclaiming they were “just going to talk.” Lisa was positive she was going to be raped. She asked if she could use the bathroom, but the door wouldn’t lock, and she couldn’t get the window open. When she returned, Sam was naked. He went into the bathroom after her, and she saw this as her cue to escape. She grabbed her clothes (and apparently some of Sam’s), ran out the door, and started to pound on the manager’s door. No answer. (Bertha was on the phone to the motel owner, Mrs. Carr) She fled, to find a phone booth, where she made a call to the cops. By the time the manager opened the door, Lisa was gone.

Lisa’s call was logged in at 3:08 am. “Will you please come down to this number. I don’t know where I am. I’m kidnapped.”

Meanwhile, Sam blows a gasket. He goes to the manager’s office, positive she is in there. He pushed his way in, demanding, “You got my girl in there!” They got into a scuffle, keep in mind Sam was wearing only a sport coat at this point, nothing else. He tried to shove his way into her apartment, positive that Lisa was hiding in there. He searched it, couldn’t find her, then grabbed Bertha and demanded to know where the girl was. Bertha grabbed her trusty .22 and shot Sam three times. One of the shots was made only an inch from him, blowing a hole in Sam’s chest, collapsing both lungs. “Lady, you shot me,” were his last words.

Findadeath.com friend Michael H sends us this picture of Sam dead.  Don’t click if you freak out over dead folk. 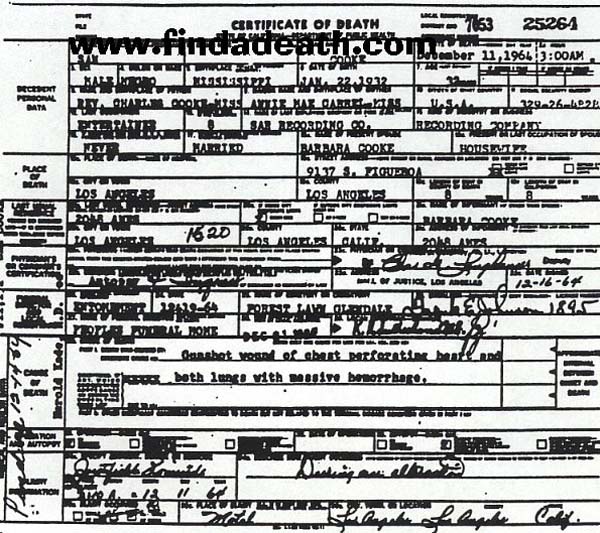 At 3:15am, Mrs. Carr (the owner who was on the phone with Bertha) called the police. “A guy just broke through the door. I think she shot him, I don’t know.”

Both women took lie detector tests, and passed. The jury ruled justifiable homicide.  There was over a hundred bucks in Sam’s wallet, so they ruled out robbery.

Scott Stanton, author of The Tombstone Tourist offers this insight:

Dear Scott:
Nothing personal, but you’re way off on your story on Sam Cooke.  First of all, Boyer was a well known hooker and had used the Hacienda numerous times for her johns.  All in all, I truly believe that Cooke was murdered.  Not by the mob (as has been reported because he owned a part of the record company and refused to bow to the west coast Mafia), but was set up by Boyer and the manager using the old steal-the-clothes-so-the-john-doesn’t-have-time-to-run-after-the-hooker trick.  Also, it has been reported that Cooke left the bar with well over $3,000 dollars that was never recovered.

There’s about 10 other reasons, but I won’t go into them here in detail.  Just wanted to give you a heads up that you’re more than likely going to get a lot of emails on this story.  WOW – Thanks Scott.  I bow to your knowledge.
Sam drew the biggest crowd of his career, for his funeral. It was held at the Peoples Mortuary on S. Central. The body was in state for three days, open casket, before being shipped to Chicago for a funeral, then shipped again back to Los Angeles for interment at Forest Lawn Glendale. In LA, Lou Rawls, and Ray Charles sang.

My new pal Cameron sends me this:  Folks drove from all over town to try to get a glimpse of Sam. When my Mother and Aunt arrived, Sam was gone (no shit.) but his car was still there. She assumed it was his, cause it was the nicest car there, “I don’t know what KIND of car, just remember it was red”. Anywho, I know she told me that anyone who went to his Funeral remembers that Sam’s’ casket was Covered in Plexiglas to prevent people from touching him, also Sam was dressed differently for the two funerals.  In Los Angeles, he was wearing a white button up shirt and black or brown slacks and his coffin was displayed (this is weird.) Standing UP. The Chicago funeral was a traditional laid down (wha?.) affair but Sam was dressed in what you show him in, Plexiglass intact. Also, his Little Boys’ name was Vincent Lance Cooke, born Dec 19th 1961(think he’s buried at Forest lawn like his Daddy, but where?) 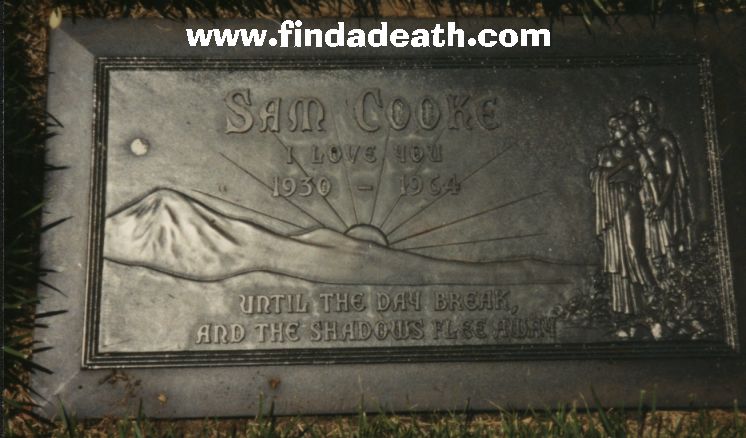 Apparently, Sam’s family still believe there was some sort of cover up, and that evidence was suppressed.

Trivia: Sam added an E to his name, for show biz.

More: Sam was driving a red Ferrari that night. Dennis Wilson of The Beach Boys later bought it. Dennis was a huge Sam fan, and would play Sam’s music in the car.

Just got this note:  Hi!

Just a note about Sam Cook (when I met him he hadn’t yet added the “e”). The name of the gospel group he sang with was “The Soul Stirrers.” When I lived in Chicago 1940 – 1953, my mother sang with a gospel (and non-secular) group called “The Victorettes.” I was at one time the “mascot” since it was a family group, and I had to tag along. Later, when I was in my early teens, I was inducted into this group and sang with them until 1960. We often appeared on the same “bill” (if you will) as the Soul Stirrers (circa the early-to late 1950s) at churches and other venues. Sam’s group was very popular in the religious sector — in Chicago, and across the United States.

At some point, Sam was enticed by record promoters to leave the group and go solo, and he eventually did. I think he recorded some religious songs before he changed over to pop music, but don’t remember the titles. I can remember seeing him at solo appearances at various churches, and I remember his records (78 RPM) being available for sale to the audience after the programs.

In 1953, my family (and the Victorettes) moved to Detroit, MI. We also traveled quite extensively in the US, but did not attain the popularity enjoyed by the Soul Stirrers. We did, however, “run into them” while traveling the gospel circuit — i.e., national gospel conventions, etc., and they were often in Detroit for appearances.

I married and moved to California in 1961, and remember Sam’s 1st big hit “You Send Me” in 1964. I’m not sure when Sam moved to California, but I used to hear of his local appearances at small clubs in the Los Angeles area around 1962-64.. And of course after “You Send Me” he was prominent as a guest on radio and TV broadcasts in the Los Angeles area.

If there’s some kind of website that gives histories of vocal groups, you may be able to verify the information about Sam’s gospel group. But if you can’t, I just want to assure you that the info is true. I was there!

This just in, January 2003, from Findadeath friend PLATINUMDIVA7:

I sent an email with the correct information regarding the shooting.  Cooke was not shot 3 times in the chest. One bullet hit the ceiling and was found on the sofa. The second bullet was never found. The third bullet entered Mr. Cooke’s body under his left armpit between the 3rd and 4th rib, passing thru both lungs and his heart. His body was found sitting upright against a door broken off the hinges, with one of his legs bent under his hip. (This is very odd for someone to sit after being in a scuffle, and hit over the forehead with an object so flimsy (according to Franklin) it leaves a 2 inch lump on Cooke’s head). Things simply do not add up in this case. It’s only fair to Cooke to put the correct information regarding the incident.

Wanted to let you know that per this CD, the Cooke toddler who died in swimming pool accident was an 18-month-old BOY, not a girl.

Per info from this CD, Sam “was never the same…he had wanted a son….”  This baby’s death is by no means less a tragedy, girl or boy.
Ronnie